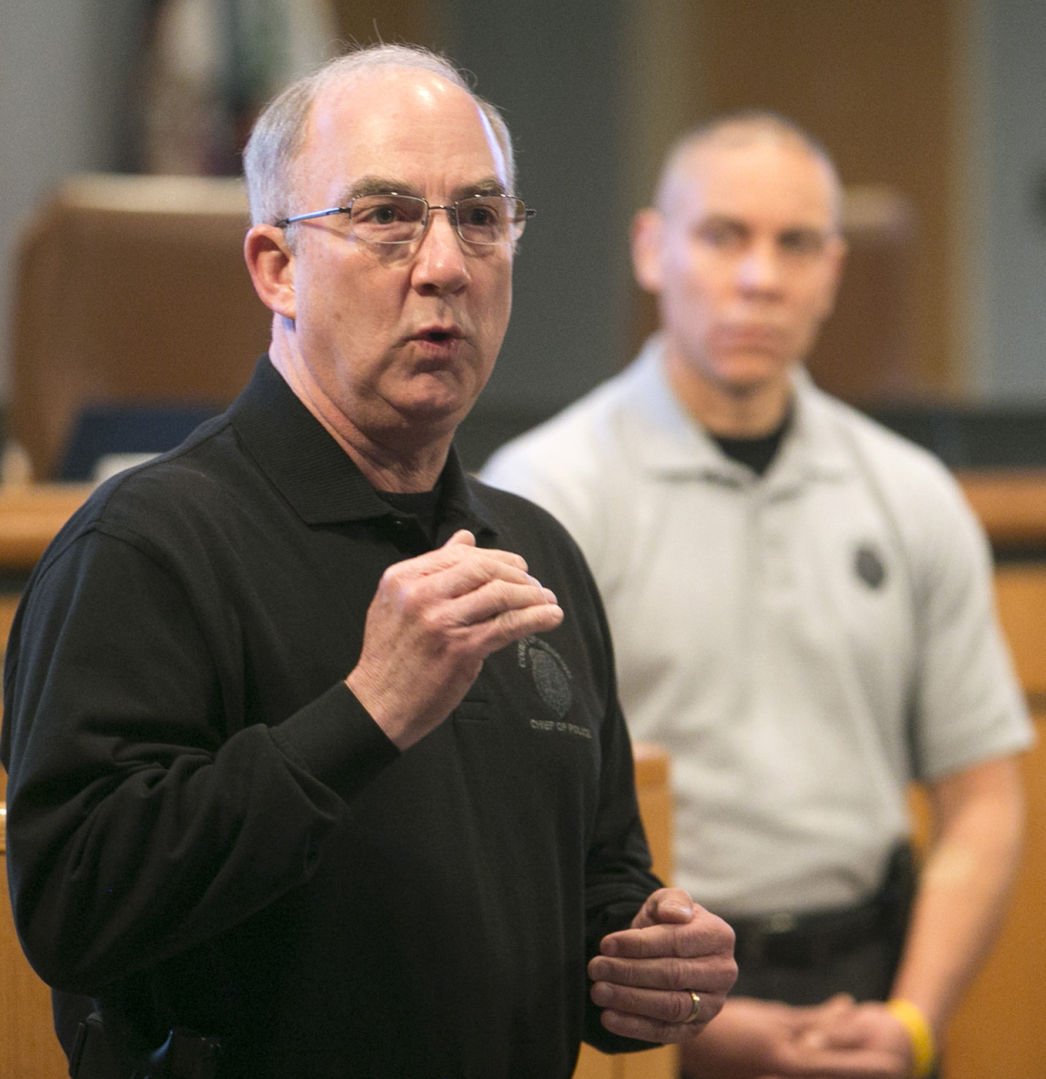 Henrico County Police Chief Douglas A. Middleton speaks to community leaders and members of the public about Fair and Impartial Policing and implementation into the county's police division. At right is one of the training course instructors, Major Clarence Hunter. 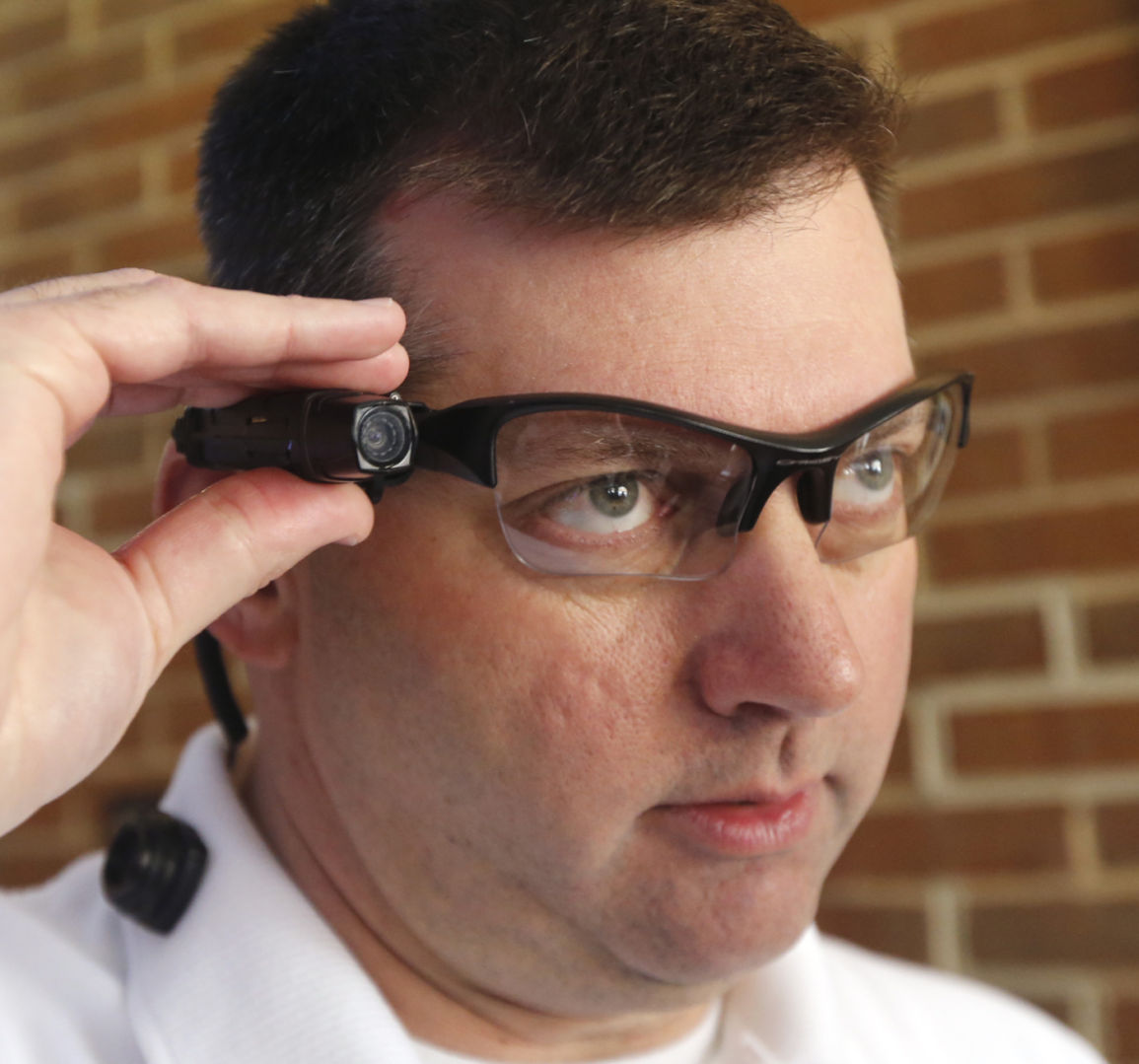 Henrico Police Lt. Dennis O'Keeffe demonstrates one of several ways that body cameras can be mounted. The cameras will be standard issue for all officers that come in contact with the public. The cameras record hi-def video and the data is downloaded at the end of the officer's shift and stored for either 90 or 180 days depending on the circumstances.

Crime is dropping in Henrico County, and police officials are pushing hard to make the county an even safer, and more inviting, place to live and work.

Chief Douglas A. Middleton and high-ranking members of his staff spent nearly two hours Saturday talking about the coming use of body cameras on uniformed officers — more than 400 by the end of the year — and an accompanying training program aimed at decreasing the impact of bias on police decisions.

Middleton also shared just-compiled statistics about 2014 rates that showed the lowest rate of crime since the current reporting system was put in use in 1995.

The information was so fresh, he said, he was sharing it with the three dozen people on hand for the Coffee With the Chief session before he had a chance to share it with the Board of Supervisors.

He said the decline has happened because of a number of new programs, particularly a focus on breaking up gang activity and, in the past two years, a “border patrol” operation run in conjunction with Richmond police.

“We’ve really been focusing on some of the areas where we have a lot in common,” he said. “It’s not unusual to have a Henrico officer and a Richmond officer in the same car.”

The focus this year, he said, is going to be on a department wide program called Fair and Impartial Policing. It includes a mandatory six-hour training session for all of the department’s 800-plus employees.

The implementation of body cameras on all uniformed officers who work with the public is also underway, a program that requires an additional two hours of training.

“We know we all have biases,” he said. “How we address those is what’s important.”

He said the classroom training was more important than the cameras because “training changes how we react,” but he said the use of the cameras would help create a new kind of evidence.

Deputy Chief Clarence T. Hunter Jr. is heading the anti-bias training, and Lt. Dennis P. O’Keeffe is in charge of the cameras.

Hunter showed the crowd, gathered in the Board of Supervisors meeting room on East Parham Road, video clips from the six-hour training program and talked about the importance of understanding implicit and explicit biases and admitting they exist.

“Until we recognize the fact that we all have these biases, we can’t override them,” he said.

He said all police actions should be based on facts, but he said practice suggests that isn’t always the case. Even in training, he said, officers allow implicit bias to influence how they react in different situations.

The easiest way to show it, he said, was by placing a gun on male and female suspects in training exercises. Officers were much more likely to find the gun on the man than on the woman because of a societal belief that men are more dangerous.

“(Implicit biases) exist, we pass judgment and we don’t even know it’s happening,” he said.

The training program, he said, should at least make officers aware of their biases and, once cognizant, more likely to work around them.

But, Middleton said, it’s going to be tough.

“I’ll be honest,” he said. “We teach an officer from the moment he comes into the academy to not trust anyone. His life may depend on it. But we still have to work around biases.”

O’Keeffe had the show-and-tell part of the day, putting on the four versions of body cameras that will be issued to most county officers.

The best version, he said, was a pair of glasses with a camera mounted to the arm on one side. From that vantage, he said, the viewer was always seeing what the officer sees.

Beginning March 9, officers will be issued a kit that includes all four cameras. By the end of the year, every officer who works with the public should be wearing a camera.

The cameras cost $299 and the rest of the kit is $199. The county also purchased enough computer space to store a year’s worth of video for about $30,000.

O’Keeffe said the cameras are another important tool for officers.

“We’re solving crimes today you couldn’t have thought about solving 30 years ago,” he said. “I can’t imagine where we’re going to be in another 30 years.”

The cameras will be controlled by the officers. They’re supposed to be turned on during enforcement actions.

The video will be stored for at least three months.

Speaking to a room that included representatives of black, Hispanic, Asian and Middle Eastern groups, Middleton said the new programs were part of the county’s effort to work better with the community.

“There are things about the cultures in our community we need to know,” he said. “When something does happen in Henrico, we need you standing by us. And we want to stand by you.”

FACEBOOK: See a video from Henrico Police created by HCTV – Channel 17. See explanations as to what the public can expect to see.

The top law enforcement officials from Richmond, Henrico, Chesterfield and Hanover will be at Public Square #55 on March 12. Details, Page BX.

In our first Public Square of 2015, we invite you to a conversation with the top law enforcement officials from Richmond and Chesterfield, Hen…

As discussed in the recent ‘Coffee with the Chief’ public meeting, Henrico Police will begin to outfit its officers with body-worn cameras lat…

Henrico County Police Chief Douglas A. Middleton speaks to community leaders and members of the public about Fair and Impartial Policing and implementation into the county's police division. At right is one of the training course instructors, Major Clarence Hunter.

Henrico Police Lt. Dennis O'Keeffe demonstrates one of several ways that body cameras can be mounted. The cameras will be standard issue for all officers that come in contact with the public. The cameras record hi-def video and the data is downloaded at the end of the officer's shift and stored for either 90 or 180 days depending on the circumstances.