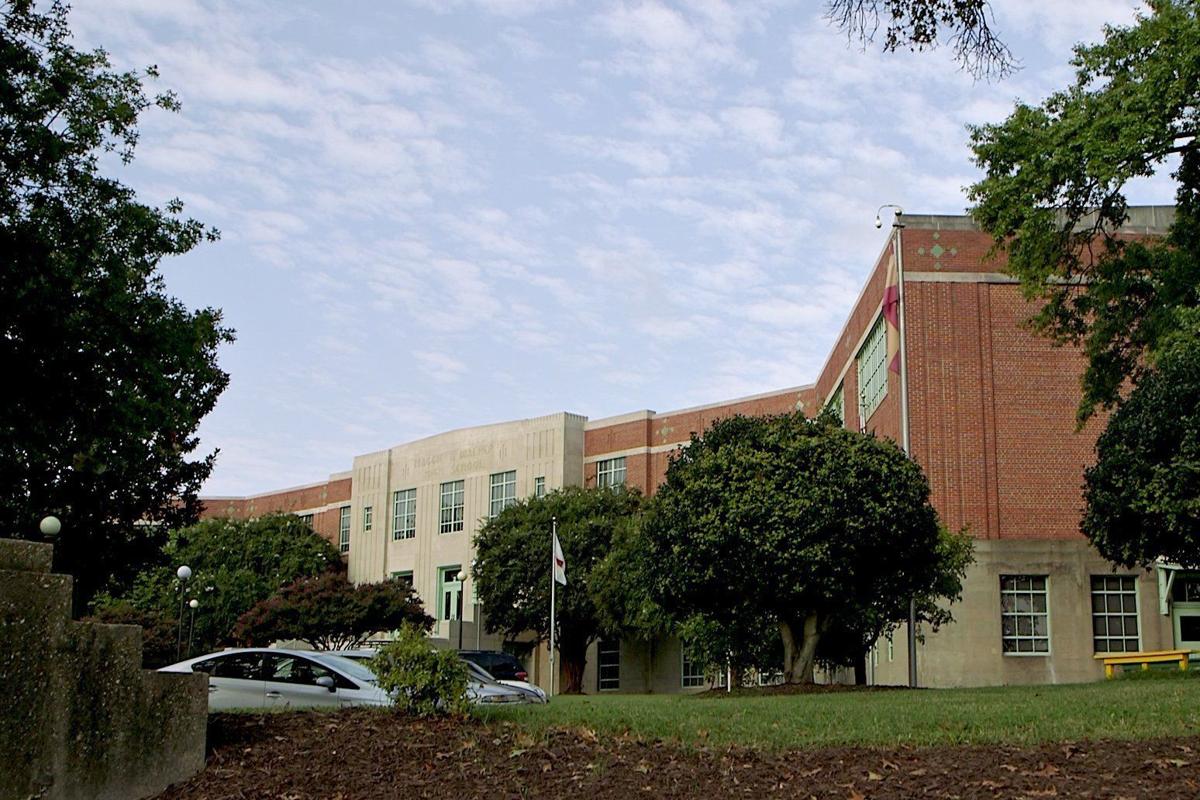 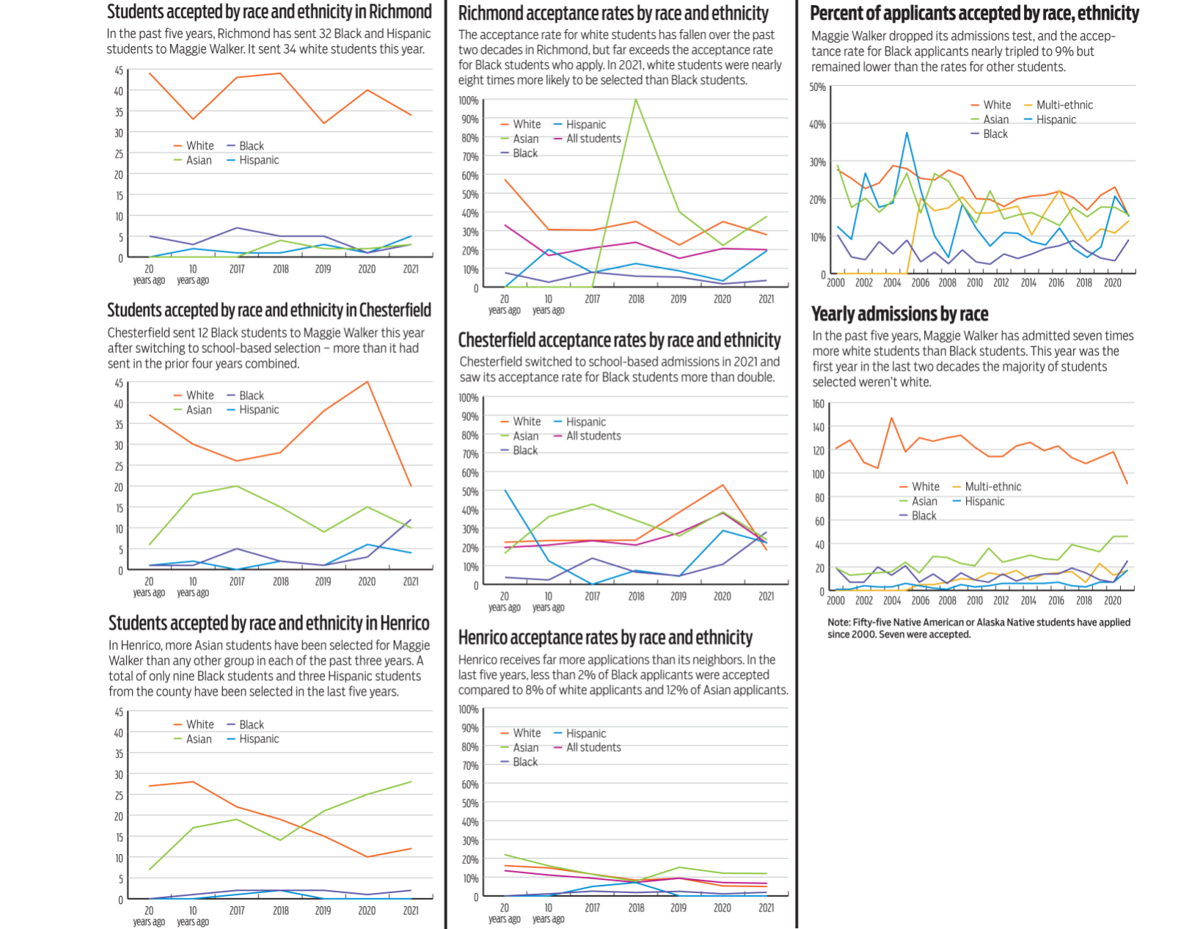 The regional board of the Maggie L. Walker Governor’s School voted unanimously Thursday to remove the achievement portion of a two-part admissions test in hopes of boosting equity at the gifted school.

The move adds Maggie Walker to a pool of magnet schools that have been rethinking admissions requirements into gifted programs, naming admissions tests as barriers for students of color and economically disadvantaged students. Critics say the change won’t do enough to increase opportunities for those students.

White students who apply to the school have been accepted nearly four times more often than Black applicants during the past two decades, a Richmond Times-Dispatch investigation published this month found. In Richmond, white students account for about 20% of public school enrollment but made up 90% of the district’s Maggie Walker selections in 2020.

Maggie Walker waived the admissions test last year in large part because of the pandemic, but admissions reports show it did little to increase the diversity in most of the 14 localities that send students there.

Bob Lowerre, director of Maggie Walker, said the achievement test being scrapped is a 10th-grade level history test that a planning committee at the school says creates a barrier for admissions. It doesn’t serve as an indicator of who will do well at Maggie Walker, and members of the planning committee say it doesn’t make sense to administer a test with material for 10th-graders, especially when they’ll likely learn the material once accepted into the school.

“The achievement test is the thing that specifically jumped out as having absolutely no value,” Lowerre said in an interview after Thursday’s regional board meeting at Libbie Mill Library. He also hasn’t taken the removal of an aptitude test off the table. “There are several out there that have suggested the aptitude test also needs to go, and we’ll look at it ... but that’s where we are right now.”

Akil Bello, senior director of advocacy and advancement of FairTest, said the aptitude test, which is meant to test how children think, could be even more problematic than the achievement test.

“An aptitude test is based on the theory that you can measure someone’s abilities [or] potential for doing well, apart from curriculum that was learned,” Bello said in an interview. “In practice, the distinctions are very minor, but the SAT originated as an aptitude test, and there’s a lot of problematic implications on that.”

The SAT, a standardized test administered by The College Board and often used for college admissions, has been criticized for having roots in elitism. Studies have shown that rich students do better on the SAT.

Lowerre had been testing the recommendation with Maggie Walker’s board since last year, when the school waived its admissions test to prevent COVID-19 spread. At the time, John Axselle, the chair of the Hanover County School Board, opposed dropping the test and expressed concern about lowering standards if any part of the admissions test was removed. During Thursday’s meeting, Axselle voted to remove the test.

“Everyone well knows I was concerned over the issue,” Axselle said. He went on to thank Lowerre and Hanover Superintendent Michael Gill for pushing him on the matter and explaining the change further.

Paul Fleisher, one of two people who filed a federal Office for Civil Rights complaint against the Maggie L. Walker Governor’s School nearly a decade ago, said during the meeting’s public comment period that the changes wouldn’t go far enough. He also recommended the governor’s school remove an Algebra I requirement as recommended by a lengthy University of Virginia study done in 2009. He said the use of a composite score, which the school sends to the feeder districts to determine who is among the top applicants, is outdated.

“Using composite scores has not been best educational practices for decades,” Fleisher said during public comment. In a later interview, he said his experience as a longtime gifted educator in Richmond Public Schools taught him that composite scores don’t give enough information about a single student.

“What do you know about the kid if you have a single number? It tells you very little. ... You don’t know whether this kid is strong in math, or in language arts, or in leadership skills ... you don’t know because all you have is a number,” Fleisher said.

The removal of the achievement test and booster of an essay students will need to write is just one part of an ongoing plan to make Maggie Walker more diverse and equitable. The teachers at Maggie Walker, most of whom are white, are undergoing cultural competency training in partnership with Virginia Commonwealth University. Artifacts from the old Maggie L. Walker High School, a Black school during legal segregation that was housed in the same building, have been moved to be displayed on the first floor.

Currently, the school has less than 10% Black and Latino students combined. It has even fewer economically disadvantaged students, drawing allegations of elitism and racism from the larger community. Since the murder of George Floyd, the school has taken steps to reconnect the governor’s school to the legacy of Maggie L. Walker High School.

This year was the first year in the past two decades that the majority of students selected to attend Maggie Walker weren’t white. But the increase in Black students was driven almost entirely by Chesterfield County, a locality that tweaked its admissions process beyond waiving the test.

Chesterfield makes sure all schools are represented in its selections instead of putting all applications from across the county into the same pool. The division selected a dozen Black students for Maggie Walker this year after sending three in 2020.

Alumni and current students told The Times-Dispatch that their experiences made them feel that the school has more work to do to support students of color.

Diversity at all 19 of Virginia’s governor’s schools has been a statewide topic. During the last legislative session, Del. Roslyn Tyler, D-Sussex, introduced HB 2305, which would have required the Virginia Board of Education to create guidelines to diversify the governor’s schools and the pipeline from participating middle schools.

The bill died in a state Senate committee after a controversial discussion around the Thomas Jefferson High School for Science and Technology dominated the vote. The state education board is creating regulations that will include recommendations from Superintendent of Public Instruction James Lane’s African American Superintendent’s Advisory Council.

The Times-Dispatch also found that only two of the 19 governor’s schools have Black populations equal to or higher than 22%, the share of Black students in public schools in the state. And 15 of the schools have faculties that are at least 80% white, including six where every staff member is white.