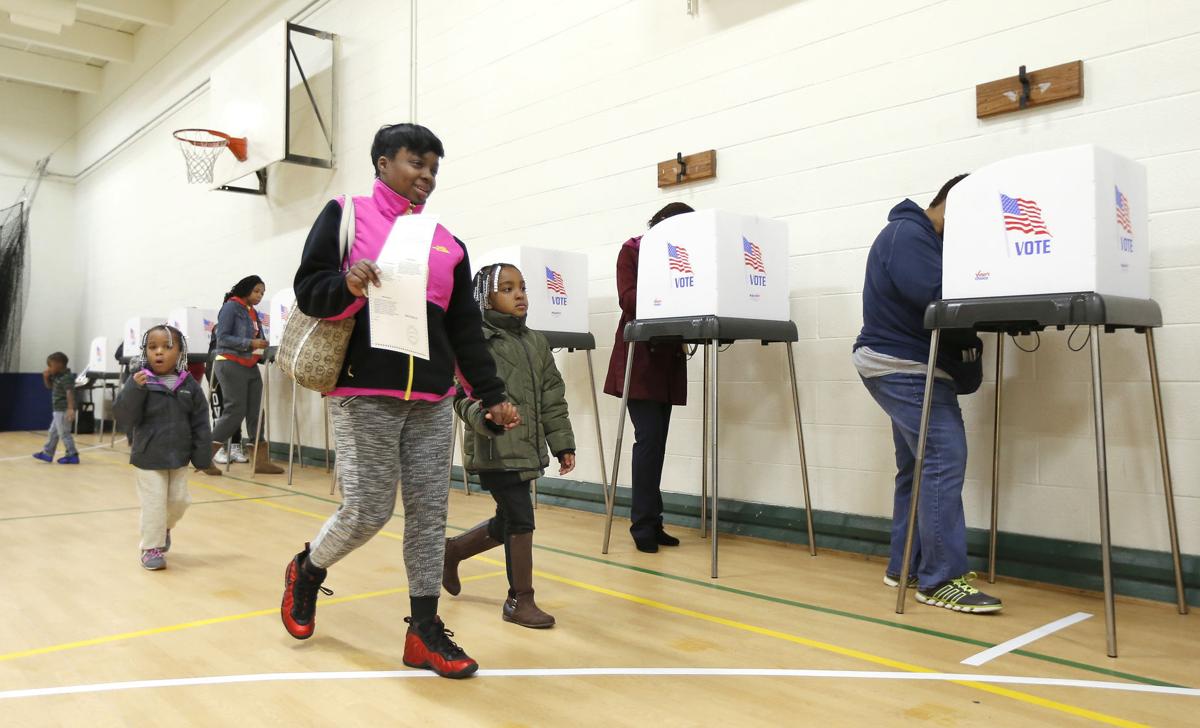 Ashley Medley walks with her daughters, Ashlynn McNair, 6 (holding her hand), and Demiyah Stewert, 4 (behind her), to cast her ballot at Henrico High School. 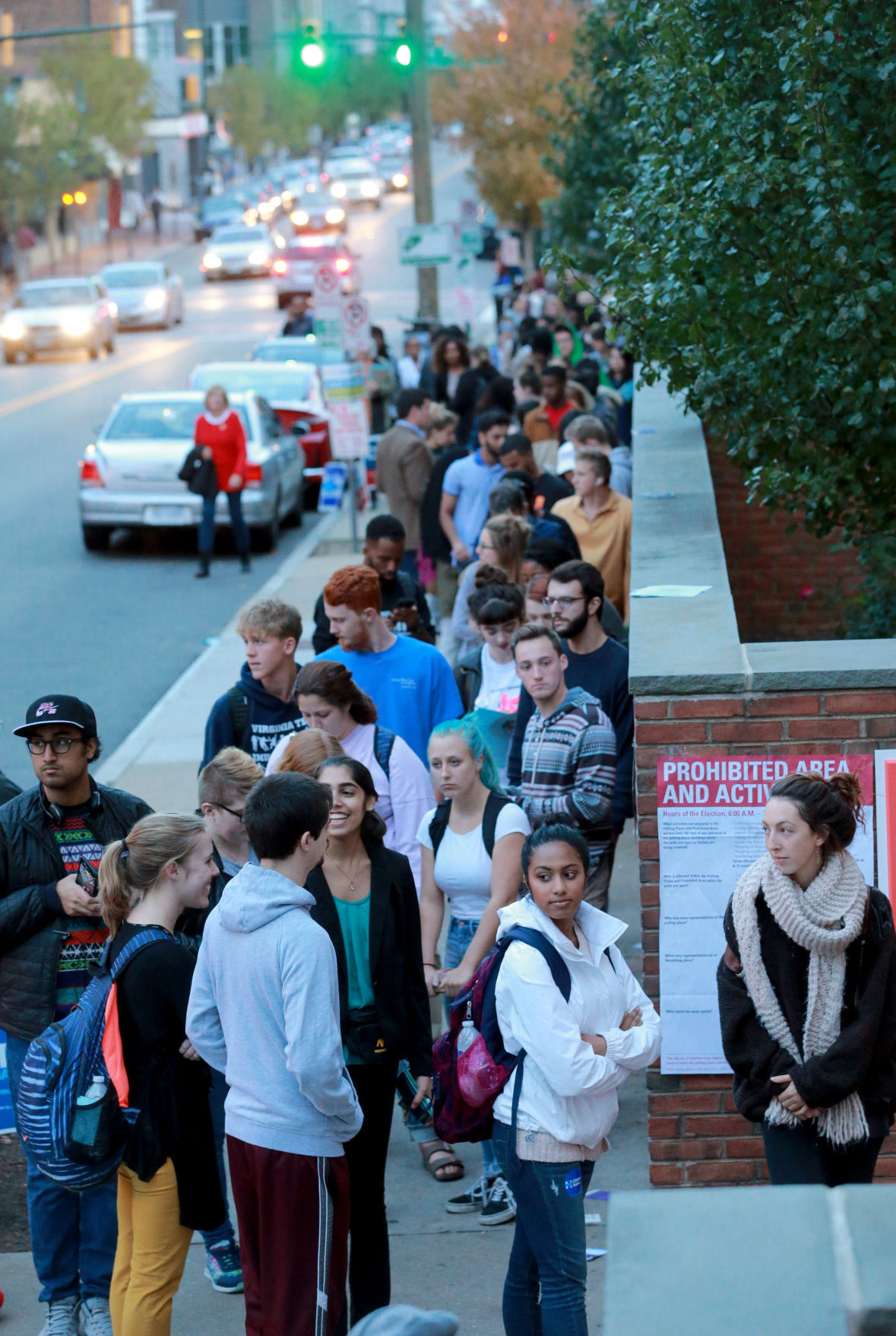 Voters wait in line as they circle around the Dominion Place building and nearby parking lot in Richmond. Jannie Phienboupha, a Virginia Commonwealth University freshman and first-time voter, said she waited two hours to cast her ballot. 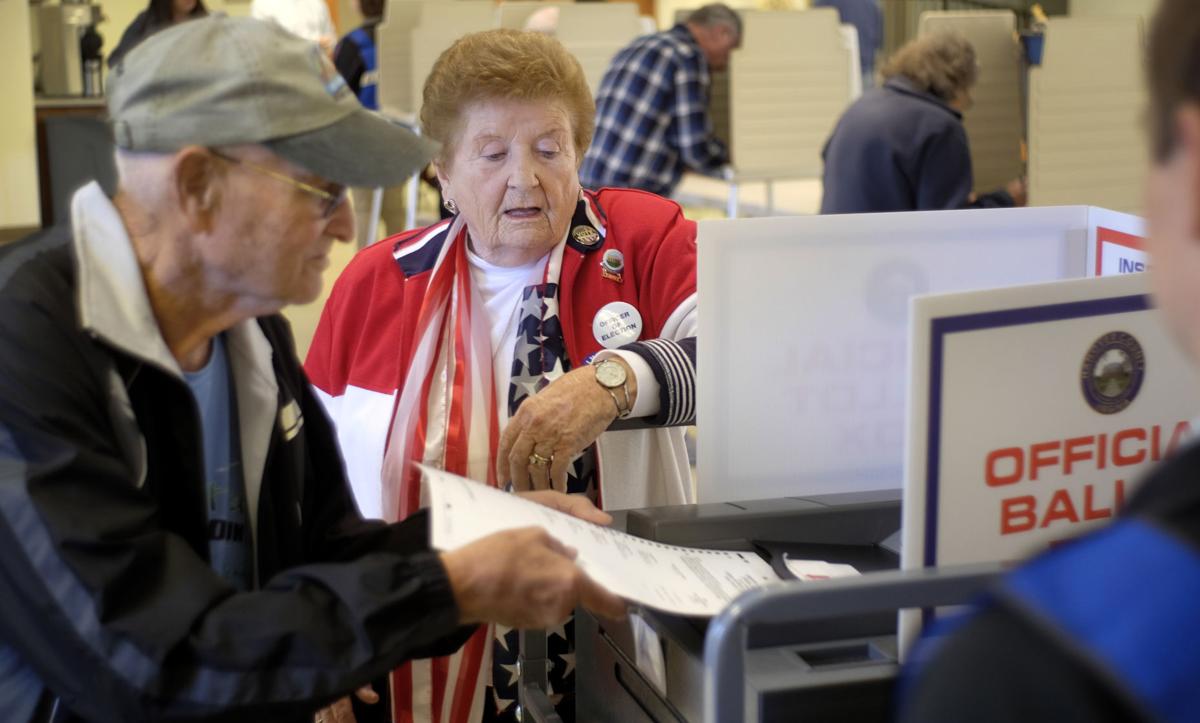 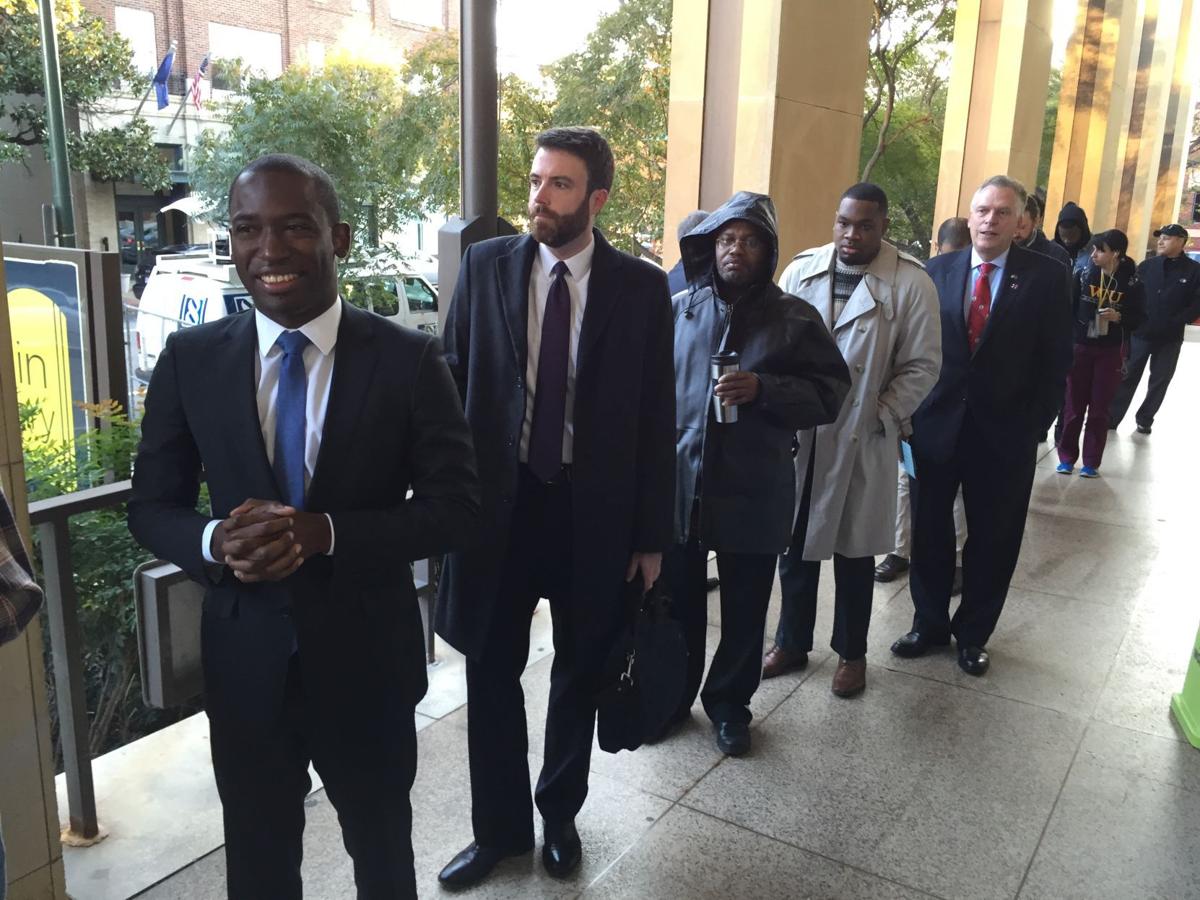 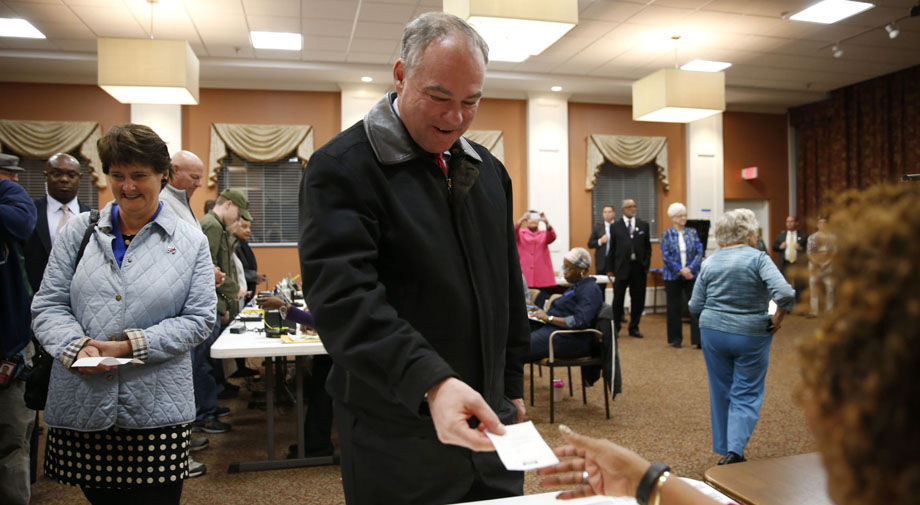 Democratic vice presidential candidate Tim Kaine goes to receive his ballot to vote on Tuesday Nov. 8, 2016. Behind him is his wife, Anne Holton.

Voter registration and turnout was so big in Henrico County that some precincts are likely to be divided after this year’s record presidential election.

Lines were reported to be two hours long at Dumbarton Elementary School with less than 30 minutes to go before polls were to close, although voters already in line were guaranteed by law to be allowed to cast their ballots.

“Some of the polling places have reached capacity and probably need to be split,” Henrico Registrar Mark J. Coakley said Tuesday evening.

Dumbarton Elementary is likely to be one of them. The precinct is one of Henrico’s largest and already operates with two optical scanners and the maximum number of electronic poll books to verify voter registration.

But the long lines didn’t dismay Coakley, who said the county set a record with voter registration at more than 222,000 this year and likely met or exceeded turnout in the 2008 presidential election at nearly 80 percent.

“It was a fun day,” said Coakley, who is in his 20th year running elections. “I’ll take this over 30 percent turnout every time.”

In Richmond, a line of more than 200 voters remained at 7:30 p.m. at Dominion Place, a polling place on West Grace Street in the heart of Virginia Commonwealth University.

More than 2,300 people had voted at Dominion Place since the poll opened at 6 a.m., said TriVonda Mines, chief election officer. “It’s more than it was in 2012 by a little bit.”

With turnout heavy and emotions high, the election brought plenty of challenges to voting officials: optical scanners that jammed; voters who had registered but didn’t show up in poll books; and, maybe for the first time, questions about whether voters could use cellphones for photos but not conversation.

Across the metro Richmond area, heavy turnout was reported, with some machine glitches and one verbal altercation at a Chesterfield County precinct that was broken up by law enforcement.

Still, it wasn’t nearly as bad as poll monitors feared.

“We were glad to see we didn’t have any instances of intimidation and the stuff we were alerted for,” said Bill Farrar, spokesman for the American Civil Liberties Union of Virginia, which monitors polls for potential civil rights violations.

Some voters were surprised when poll workers at several precincts required them — incorrectly — to turn off their cellphones.

Virginia Department of Elections Commissioner Edgardo Cortés said cellphones cannot be prohibited in polling places on a blanket basis but can be required to be shut down if they are causing a disruption.

“You can take pictures, but you can’t talk on them,” Coakley said in Henrico.

Cortés said voting officials in Fairfax County and other localities reported instances of people who had registered to vote not being in poll books. He said the same thing happened, as it often does, with voters registered through the Department of Motor Vehicles, where the state has a process for auditing registration applications to determine whether to count provisional ballots.

“If you’re not showing up in the poll book, you must be offered a provisional ballot,” he said, “so please don’t leave without voting.”

Cortés said some technical problems had occurred with scanning and touch-screen machines, but voting was able to continue because contingency plans were in place.

At Pinchbeck Elementary School in Henrico, the machine for feeding in ballots to be scanned jammed. The ballots were stored in a separate box until the scanner could be repaired or replaced, which Coakley said didn’t take long.

“We’re not as quick as 911 Fire, but we pride ourselves on getting out to polling places as quickly as we can and getting issues resolved,” he said.

Nottoway County had a different sort of problem, Cortés said. Instead of the presidential header appearing on voters’ screens, for awhile it read “U.S. Senate race.” But he said all the votes were counted correctly.

But the story of the day was turnout, which was heavy before polls opened.

The longest election lines were reported in Richmond and in Prince William County, Cortés said in an early afternoon briefing. An extra scanner had to be sent to the City Hall East polling place in Richmond to help with the wait there, but voters in line by 7 p.m. were allowed to vote.

At 7:15 a.m., when Gov. Terry McAuliffe took his place with a cup of coffee at the end of the line at the downtown Richmond library, about 200 people already had cast ballots.

“Six o’clock, they were standing at the door,” said Carolyn Moseley, the chief officer at the polling place, who said the line was comparable to the historic 2008 election of President Barack Obama.

McAuliffe, in line a few places behind mayoral candidate Levar Stoney, waited about an hour to vote at the library on East Franklin Street. McAuliffe and Stoney shook hands along the line as they left separately.

Voting at Richmond Community High School ebbed and flowed Tuesday morning, with a total of 735 voters casting ballots at the 3rd District precinct by noon.

One of them was a man in his 70s who was voting for the first time after having had his rights restored this year under a sweeping restoration initiative spearheaded by McAuliffe.

“It gave me goosebumps, to see him cast his first ballot,” said precinct captain Margaret Gaines, who has overseen voting at Richmond Community High for more than 20 years. “I had to help him, because he didn’t know what to do.”

PHOTOS: Some waited two hours for voting this evening near VCU

Scenes from polling places across the Richmond region as voters cast their ballots.

Ashley Medley walks with her daughters, Ashlynn McNair, 6 (holding her hand), and Demiyah Stewert, 4 (behind her), to cast her ballot at Henrico High School.

Voters wait in line as they circle around the Dominion Place building and nearby parking lot in Richmond. Jannie Phienboupha, a Virginia Commonwealth University freshman and first-time voter, said she waited two hours to cast her ballot.

Democratic vice presidential candidate Tim Kaine goes to receive his ballot to vote on Tuesday Nov. 8, 2016. Behind him is his wife, Anne Holton.