For thousands of years, red knots have made one of the greatest migrations in the animal kingdom — more than 9,000 miles each spring from the southern tip of South America to the high Arctic tundra of northern Canada.

Something spooked the feeding birds, and they took off in a cloud of beating wings.

“They are really powerful flyers,” said Bryan Watts, a biologist who has studied the knots.

And they’re in a powerful amount of trouble. The knots’ numbers have dropped about 80 percent since the early 1980s, experts say.

The reasons have included the catching of horseshoe crabs that lay eggs the birds eat north of Virginia, Atlantic beachfront construction that destroys feeding spots, and hunting in the tropics.

The U.S. government declared the knots a threatened species in December.

Now red knots have a new problem — climate change — and Virginia is at the center of the issue. Here’s what’s happening:

Scientists determined in recent years that many of the knots begin their journey’s last leg — a 1,500- to 3,000-mile flight to the Arctic — following a big meal of tiny young mussels on the wild barrier islands off Virginia’s Eastern Shore.

But the mussels are dying out in their southernmost realms just south of Virginia. Scientists believe climate change is creating conditions that are too warm for the cold-loving creatures.

If that continues, the mussels could disappear from the Virginia coast in 30 years or so, scientists say, dealing a huge blow to the already struggling knots. It’s possible the mussels already are being affected here, resulting in less food for the knots.

“Climate change is another factor that’s layered on top of (the knots’ problems), and it’s happening now,” said Watts, director of the Center for Conservation Biology at Virginia Commonwealth University and the College of William and Mary.

Red knots have company in their misery. Of the 35 species of shorebirds that travel the Atlantic flyway — an avian migratory highway that includes Virginia — about three-quarters are in decline because of construction along their beaches and other problems, Watts said.

But the knots stand out because they have been big newsmakers, and their plight is so pronounced.

Red knots have received national attention for more than a decade, largely because of the spectacle they create along the Delaware Bay, between Delaware and New Jersey.

There, tens of thousands of knots gather each spring to feed on the eggs of horseshoe crabs, which crawl from the water like little tanks with tails. The phenomenon draws tourists and bird watchers.

In the late 1990s, horseshoe crab numbers plummeted — they were being overfished commercially, experts said — and the already falling knot numbers dropped even more.

Horseshoe crab fishing limits imposed in recent years in the Mid-Atlantic region seem to have stabilized the crab population.

Now scientists like Watts are focusing on the birds’ problems in Virginia.

Blue mussels are the knots’ food of choice along the state’s barrier islands. They can eat other foods, such as young clams, but a loss of mussels would add one more challenge for the struggling birds.

Knots are important because a healthy environment is measured by how well its pieces are doing, said Gregory Breese, a federal biologist in Delaware.

“To the extent that the red knots are now threatened and are not doing as well as they could be, that says something about the environment we are living in, too.”

Plus, red knots are inherently interesting, Breese said. “They’ve got a fascinating life cycle. They have an epic journey. There is a ton to like about them.” 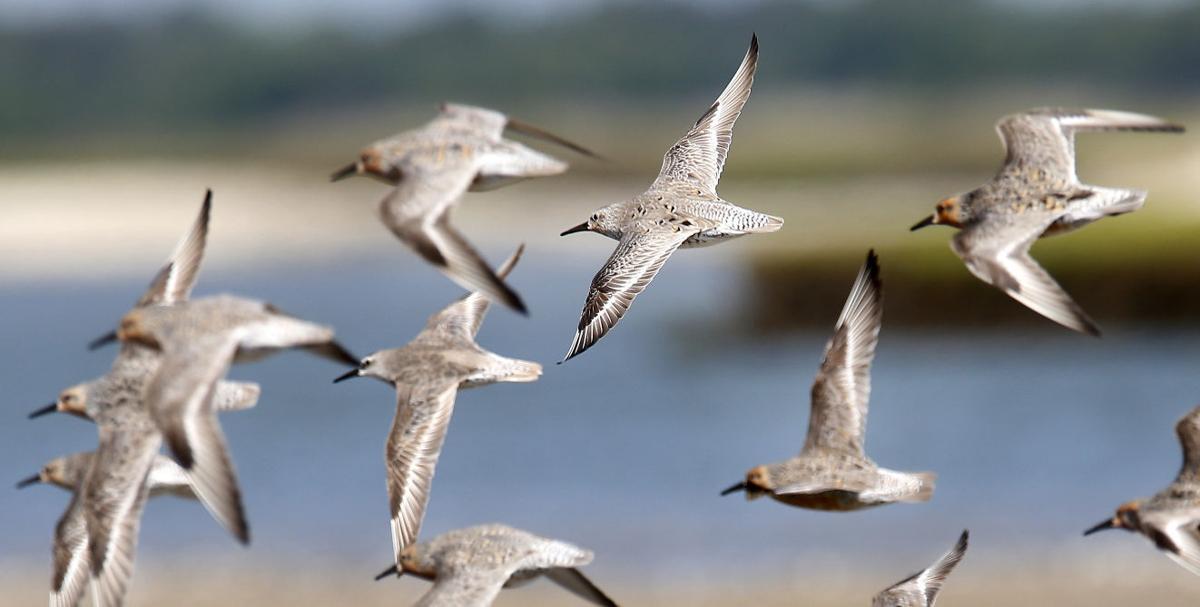 Red knots fly over a peat inlet on Metompkin Island. 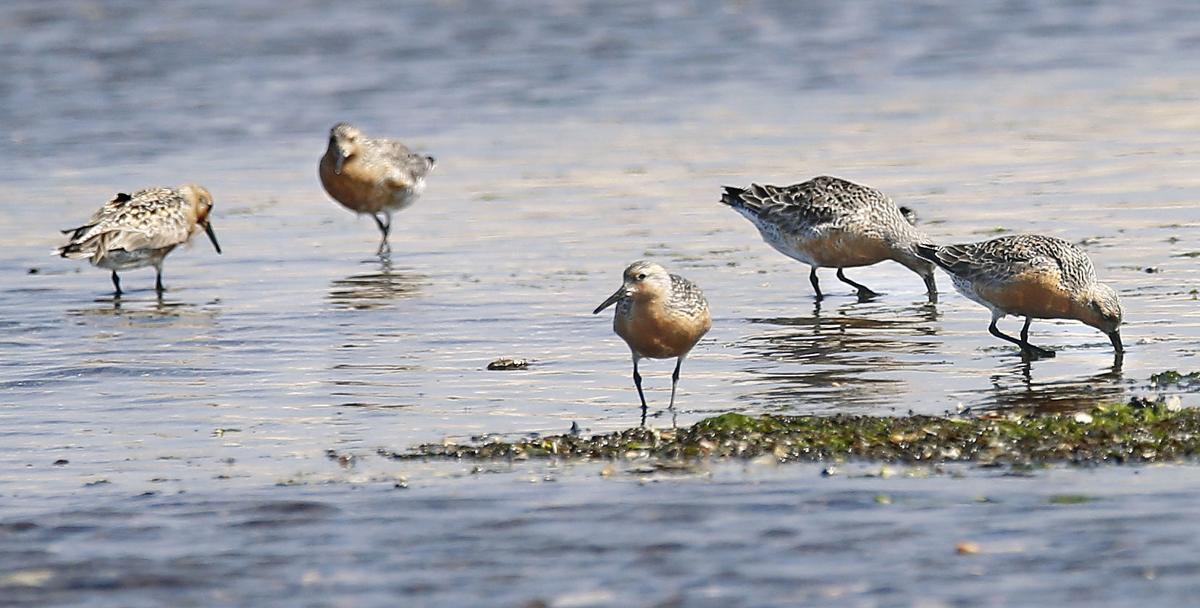 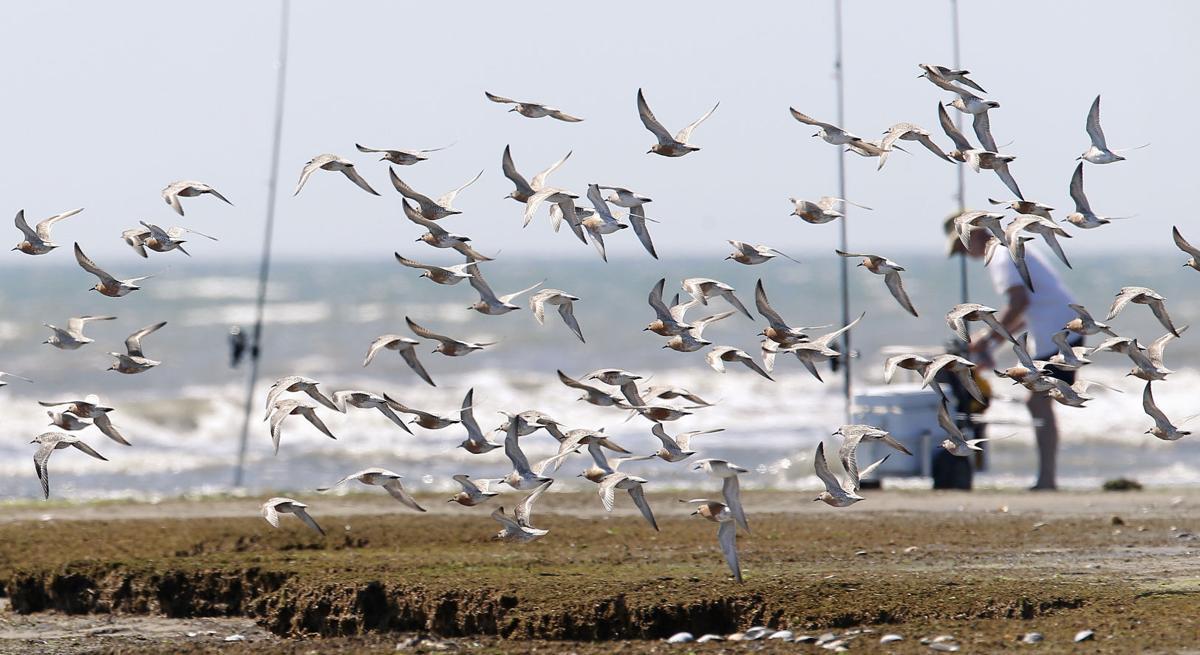 Red knots fly over a peat inlet on Metompkin Island Tuesday, May 26, 2015. 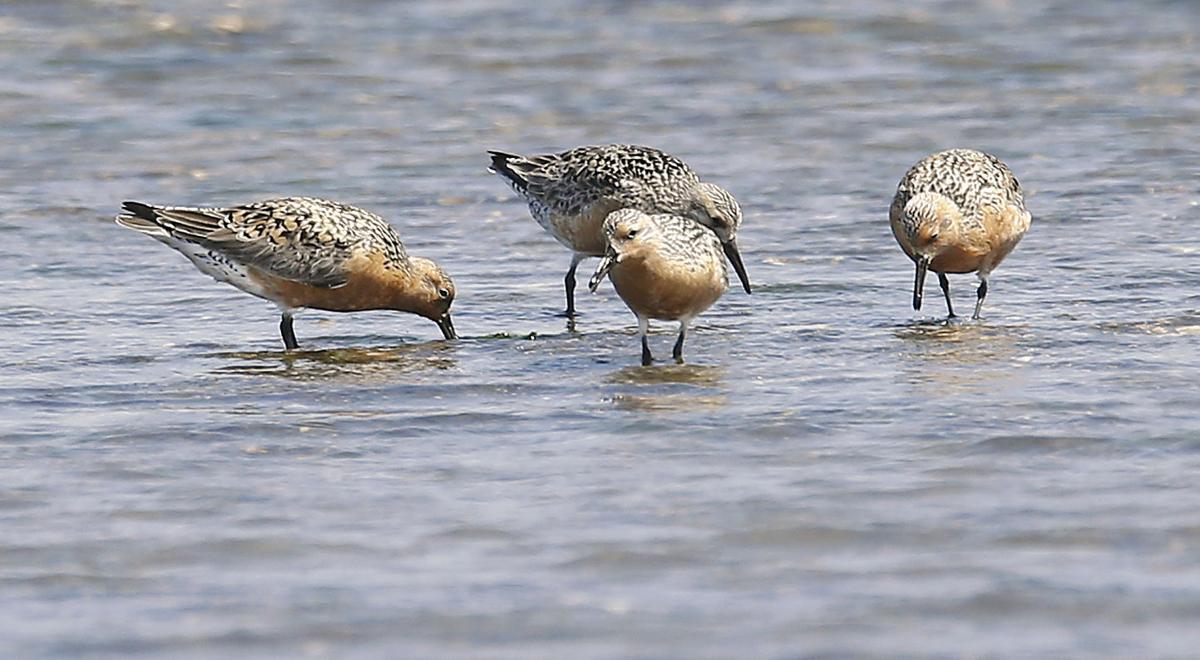 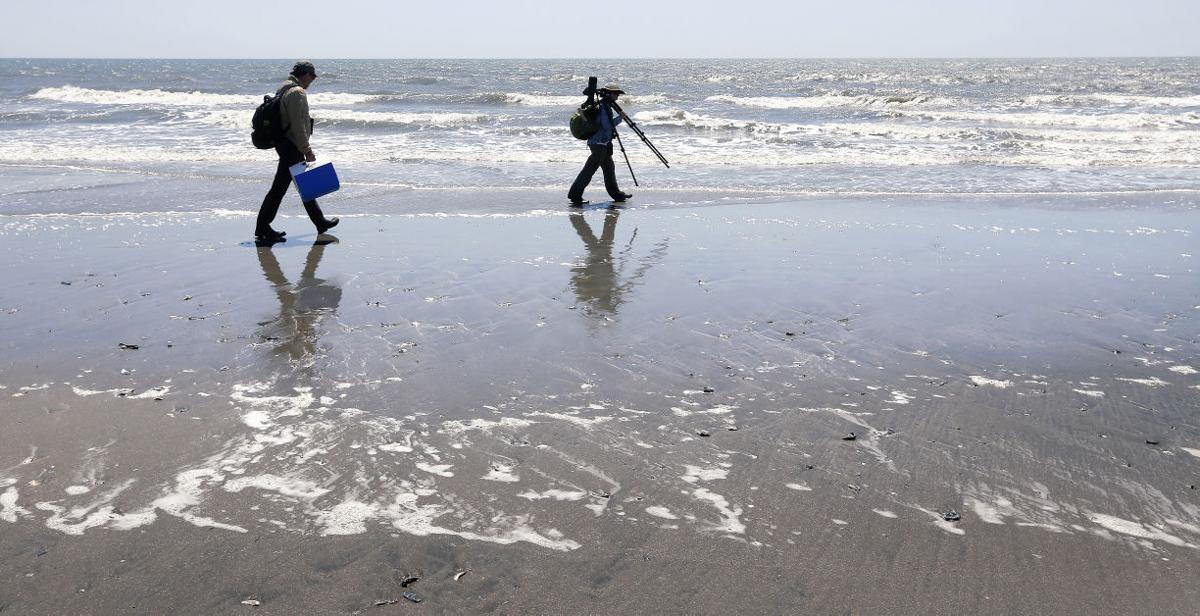 Bird expert Bryan Watts and Alex Wilke of The Nature Conservancy's Virginia Coast Reserve walk along the beach on Metompkin Island Tuesday, May 26, 2015.

Red knot birds stop off to feed on the barrier islands of the Eastern Shore before continuing their 9,000-mile journey from South American to the high Arctic.

Red knots fly over a peat inlet on Metompkin Island.

Red knots fly over a peat inlet on Metompkin Island Tuesday, May 26, 2015.

Bird expert Bryan Watts and Alex Wilke of The Nature Conservancy's Virginia Coast Reserve walk along the beach on Metompkin Island Tuesday, May 26, 2015.

Red knots are about the size of doves, and many sport reddish breasts, leading some people over the years to call them robin snipes or beach robins. They migrate north and south, of course, but it’s the spring migration that drives the birds frantically and inspires human fascination.

The knots must reach their rugged Arctic nesting grounds in good shape so they can breed quickly before ice returns to chase them south.

For years, many people believed that the Delaware Bay was the last stop for the knots before they took off for the Arctic. But research by Watts and others has shown that many knots feed and rest — it’s called “staging” — along the coast of Virginia and well to the south before their final flight.

“No question, Delaware Bay is incredibly important, but to suggest that’s the only place the birds are staging isn’t really the case,” Watts said.

Much of that coastland has been taken over by hotels, homes and fun-seeking people. But a string of Virginia barrier islands, owned by conservation groups and government agencies, remains undisturbed.

That makes Virginia one of the most important restaurants along the red knot highway. Thousands of knots — up to 30 percent of the total feeding along the coast — refuel on Virginia’s islands before flying to the Arctic, Watts said.

Blue mussels are dark mollusks, 2 to 3 inches long, that you sometimes see on menus. Along the Atlantic coast, they once ranged from the Canadian Arctic to Cape Hatteras, N.C.

The creatures die out when temperatures get too high, and that’s exactly what has been happening in recent decades, scientists say.

The average ocean temperature for June increased about 4 degrees from 1982 to 2014 from Hatteras to southeastern Virginia, said David Wethey, a University of South Carolina biologist.

Young mussels can drift south to temporarily repopulate areas to the south, but overall the southernmost tip of the mussels’ range is moving north at about 4 miles a year.

“There is a long-term retreat that’s happening,” Wethey said.

If that trend continues, the mussels could disappear from Virginia in 30 to 40 years.

Well before the mussels would disappear altogether, their decline could make less food available to the knots in Virginia.

Wilke carried a spotting scope and Watts carried binoculars as they crept up on the 200 knots feeding in a patch of peat that lay exposed at low tide in an inlet between Metompkin and Assawoman islands.

Some knots were redder than others, since they had yet to get the bright plumage they develop at breeding time. It was hard to tell, from about 50 yards away, what they were eating.

Mussels are important because they can be extremely abundant at times and easy to find.

“It’s like going to the fridge,” Watts said. “You know something’s there.”

The landscape around the knots looked beautiful and alien to anyone used to busy Atlantic beaches.

Just to the east you could see and hear the crashing surf. About 2 miles to the west stood the trees and houses of the mainland. Underfoot lay this sandy island where nature ruled — including a pair of long-billed birds called oystercatchers with chicks, threatened piping plovers skittering on thin legs, and diamondback terrapins basking along the water’s edge.

While some knots make shorter flights, most migrate nearly from pole to pole. It was easy to see that this wild place would be an important stopover.

As long as there’s food in the fridge.