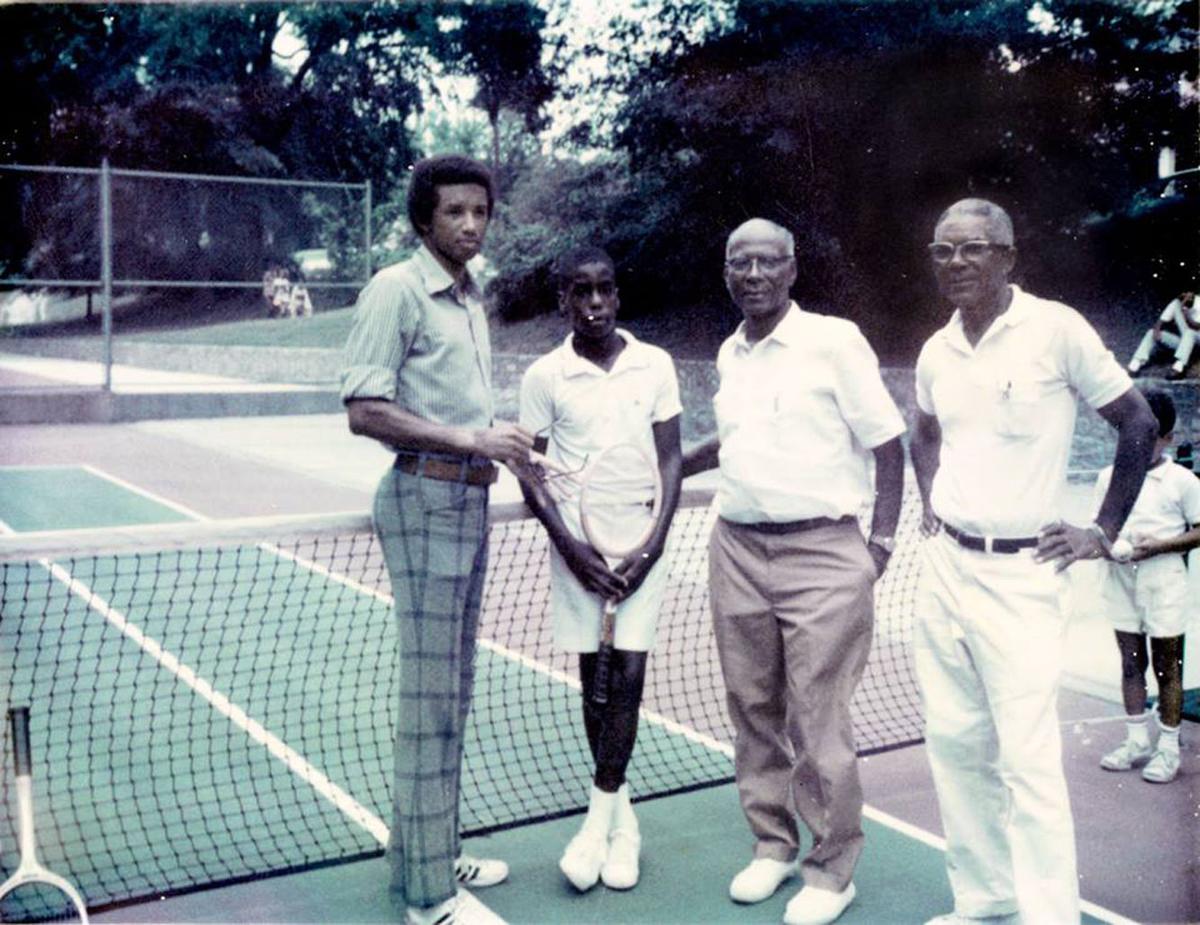 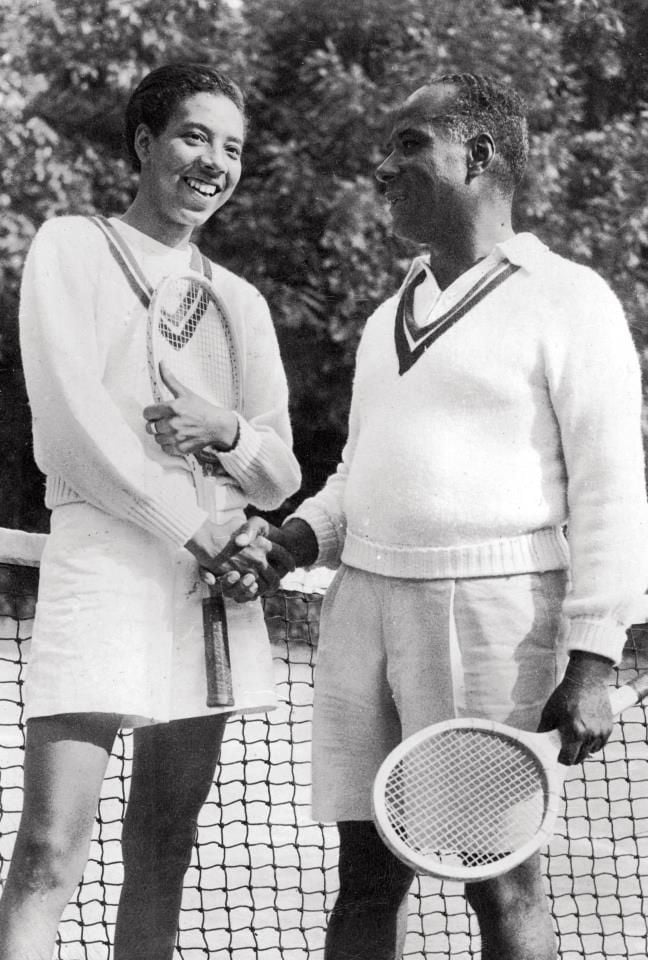 Some of the greatest players in tennis history once played on an ordinary court that sits beside a two-story house on Pierce Street in Lynchburg.

Richmond’s Arthur Ashe took the first major step toward what would become a legendary career there. Althea Gibson, the first African-American to win a Grand Slam title, mastered her craft on it. Wimbledon champions Bobby Riggs, Pauline Betz-Addie and Manuel Santana, as well as countless others who would go on to have success in other fields, all had a chance to perfect their serves, and other shots, from the baseline.

But today that tennis court, along with the house at 1422 Pierce St., has fallen into disrepair. The court is overgrown and unrecognizable; the house needs major repairs.

More importantly, most people passing by do not know what happened at the home and how the doctor who lived there helped make civil rights and tennis history.

The house belonged to Robert W. Johnson, who loved tennis and is credited with helping desegregate the sport through his efforts teaching Ashe, Gibson and others the skills they would need to succeed in tennis and in life.

Johnson’s grandchildren, who have worked for years to make sure he is remembered within the sport, are now focused on making sure the rest of the world also knows.

To do this, they have created the Whirlwind Johnson Foundation with the aim of restoring the courts and the house, and turning the home, owned by two of his grandchildren, into a museum honoring his legacy.

“This to me (is) the culmination of a lot of activity over many, many years,” said Lange Johnson, Robert Johnson’s grandson and a director on the foundation’s board.

“I’m exceptionally pleased by the amount of support, even thus far,” he said. “We are getting folks coming out of the woodwork offering to help support this initiative because it’s so critical.”

Robert Johnson, known as the godfather of black tennis, was born in Norfolk in 1899 and went to Lincoln University in Pennsylvania, where he played football and earned the nickname Whirlwind.

After attending medical school in Nashville, Tenn., Johnson took up tennis while doing his residency in Texas. He was in his 30s.

Johnson, a formidable doubles player, moved to Pierce Street in 1936 and built the court beside the house.

Wanting to foster an interest in the sport, he dedicated the court, and his time, to finding and mentoring young players by founding the Junior Development Program, a part of the American Tennis Association.

Johnson’s goal was to find opportunities for young black players to enter tournaments not open to them so they could compete at the highest levels possible.

Eric Allen Hall, author of “Arthur Ashe: Tennis and Justice in the Civil Rights Era,” wrote that Johnson’s camp was “rigorous and demanding.” Players would stay at the home, eating healthy, training and watching match films as well as doing household chores. They also learned etiquette.

“A participant in the civil rights movement, he was aware that his tennis pioneers had to have the right temperament and demeanor as well as athletic talent,” wrote Hall, a professor of history at Georgia Southern University.

While dozens of students went on to play professional tennis and have success in other fields, Johnson’s two best-known students were Ashe and Gibson.

Seven-year-old Ashe met Ronald Charity, a coach and one of the best black tennis players at the time, in 1950. Charity was practicing on the Brook Field courts in Richmond and introduced himself to the boy watching from the stands.

Charity would work with the young man and eventually introduced him to Johnson.

“When I first met Arthur Ashe, he was using a racquet much too heavy for his size,” Johnson recalled in a 1959 story in the Richmond Times-Dispatch. “Many facets of his game needed correcting, but his timing was perfect.”

Johnson was reluctant at the time to say whether Ashe could follow in Gibson’s footsteps, but noted his student’s steady improvement and observed: “He could go all the way.”

Ashe, a humanitarian known as much for his work off the court as on, was the first African-American man to win a Grand Slam title, eventually winning the U.S. Open, Australian Open and Wimbledon.

After watching her, Johnson and Hubert Eaton, another doctor and fellow promoter of black tennis players, declared that Gibson would break the game’s color barrier and develop as a Grand Slam champion, according to the foundation.

Gibson began spending her summers in Lynchburg focusing on tennis when she was 18 and would continue to do so until she was 22. Winters were spent with Eaton in Wilmington, N.C., where she focused on her education.

“If I ever amount to anything, it will be because of them,” Gibson once said.

Just how successful Johnson, who died in 1971, was is proven by the fact that what he helped Gibson accomplish was not duplicated until decades later when sisters Venus and Serena Williams broke through.

The Johnson family says refurbishing the house and court is the final step in a long process to tell Robert Johnson’s story and to assure he takes his rightful place in the history books of tennis.

That work has included having the home placed on the National Register of Historic Places in 2002 and getting Johnson inducted into the International Tennis Hall of Fame in 2009.

The foundation is now working to raise an estimated half-million dollars needed to refurbish the court and the home as it works on collecting memorabilia for the museum.

“The bigger thing is getting an awareness out there so we can get some donations to help us get this house squared away,” said Jolynn Johnson Smith, Johnson’s granddaughter, who lives in Richmond.

“It’s an exciting time … but there’s a lot of work needed … to get the word out to get this thing moving pretty quickly.”

Lange Johnson said the foundation has received a commitment from the U.S. Tennis Association to help with reconstructing the court and is also working with SportMaster Sport Surfaces.

The hope is to finish the court first to help draw attention to the rest of the project.

Lange Johnson said that once all the work is completed and the museum opens, the foundation will shift its aim to keeping his grandfather’s mission and legacy alive by helping other programs.

“That would be the ultimate goal: looking across and seeing where different organizations are mimicking or doing similar things to what Dr. Johnson was involved in and really giving back to them and helping them further their initiatives,” he said.

Tatum Sheppard, the newly crowned Miss Virginia, is no stranger to pageant titles — her mother, Kellye Cash, was named Miss America in 1987.