Chesterfield, GRTC officials at impasse with mobile home park manager over bus expansion plans in Chester
0 Comments
Share this
1 of 8 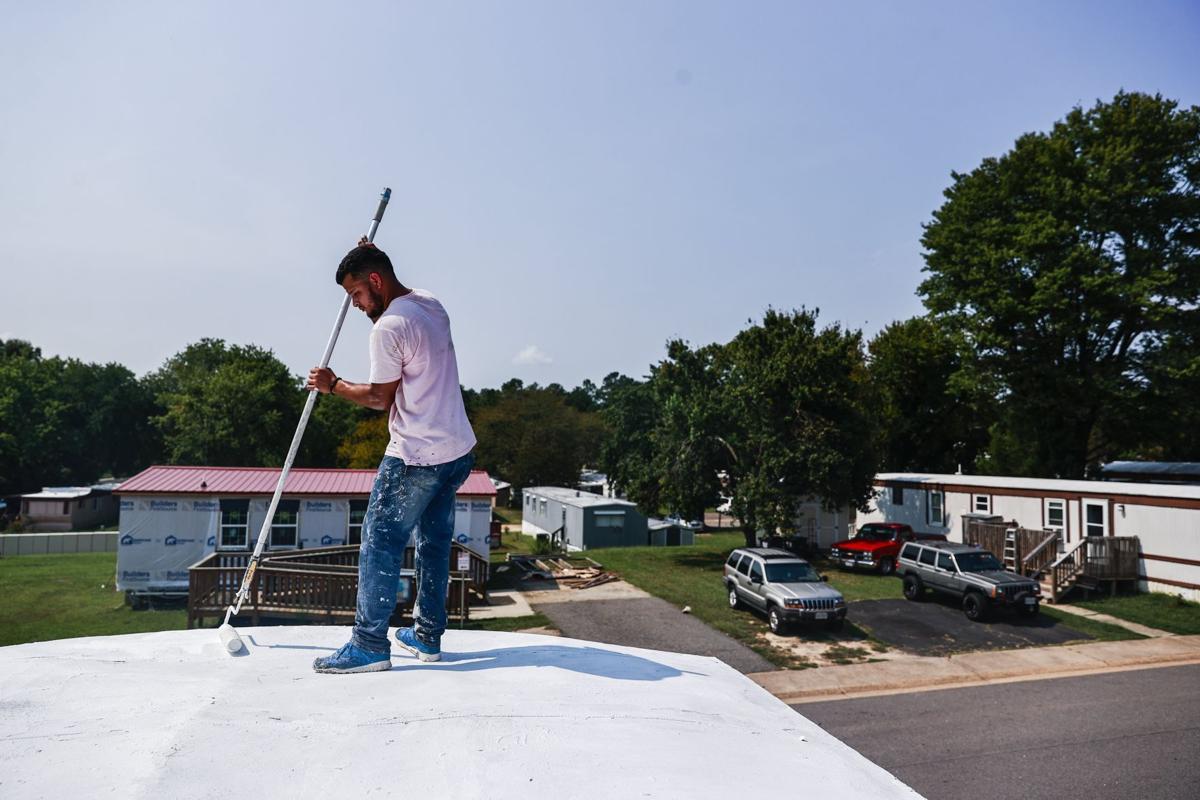 Jairo Lopes painted a roof in the Greenleigh mobile home park in Chesterfield County on Tuesday. As Chesterfield and the GRTC bus system plan to extend the transit line, the park’s manager has rebuffed the effort, saying residents have no interest. 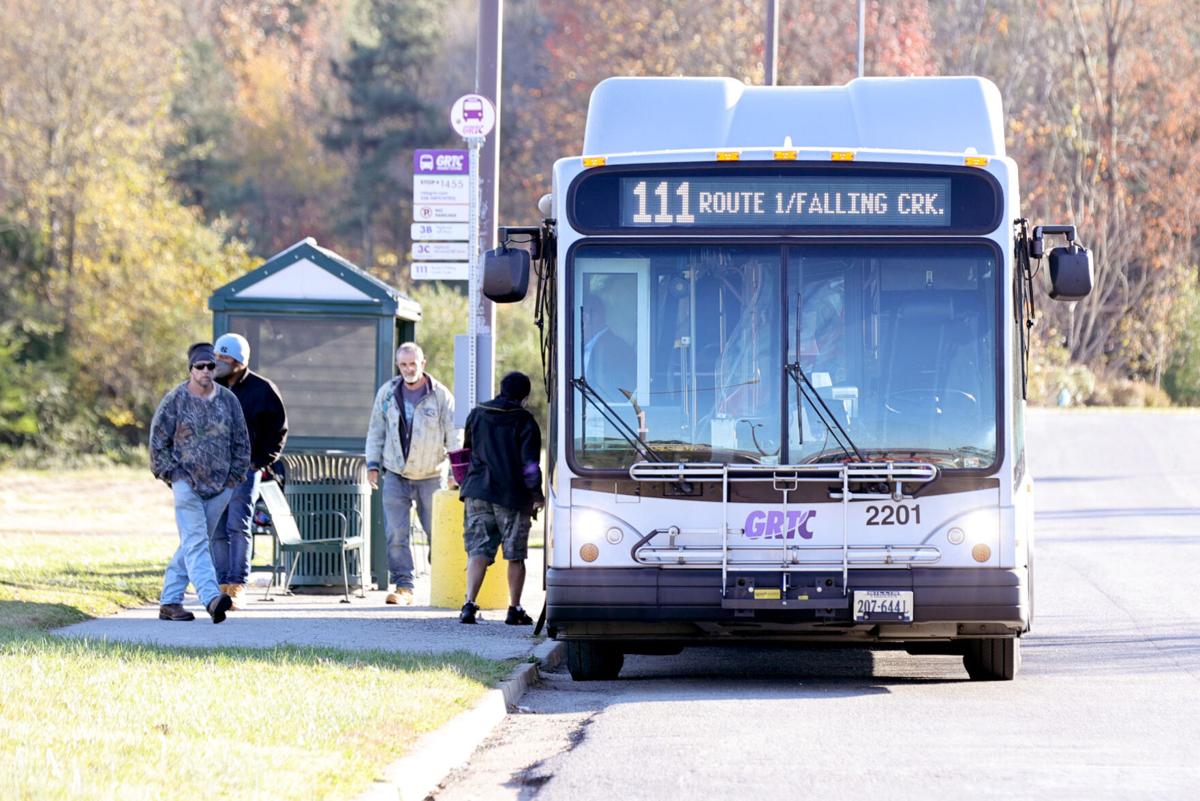 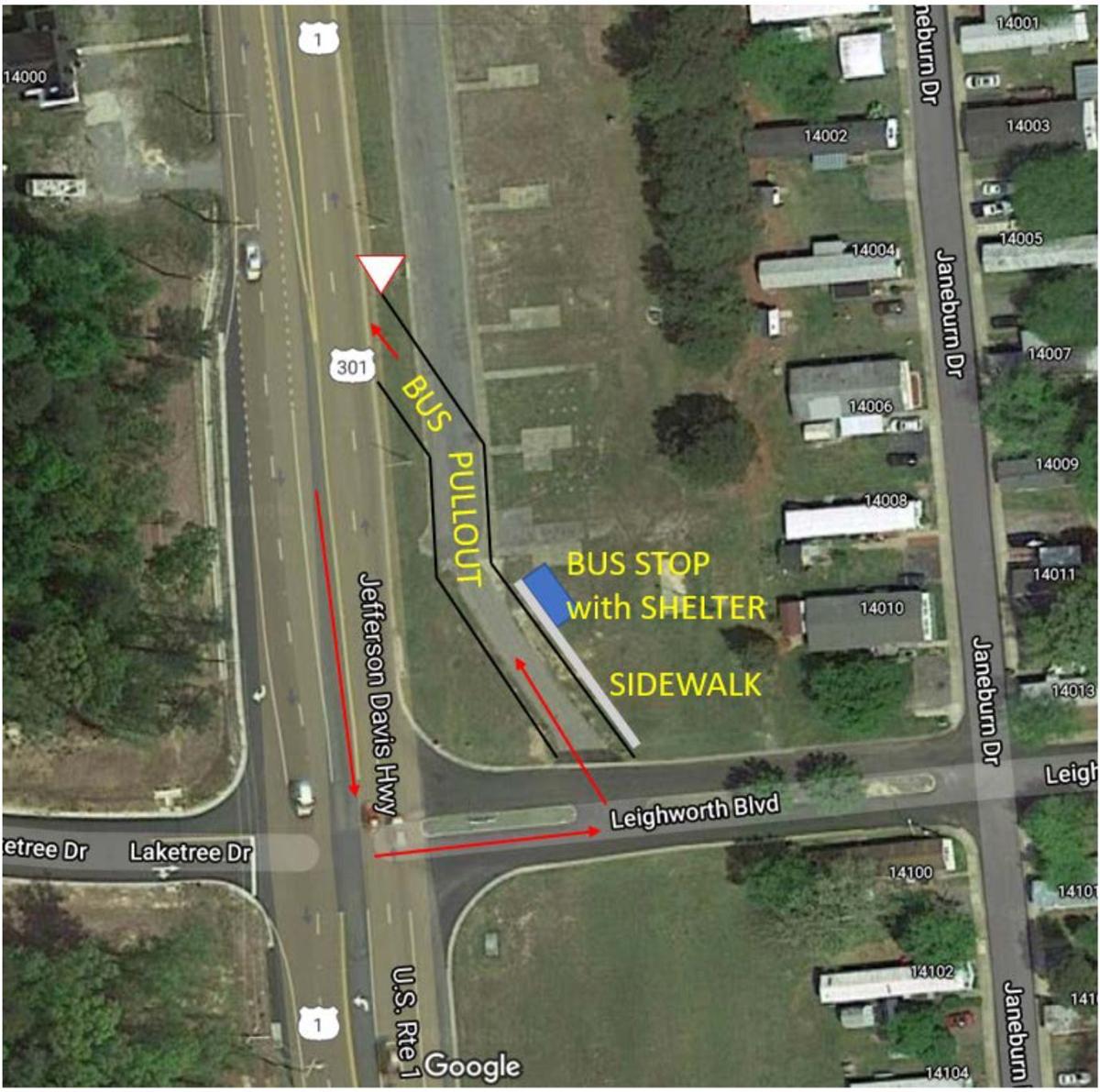 A conceptual sketch shows the proposed GRTC bus stop at the entrance of the Greenleigh trailer park in Chester. 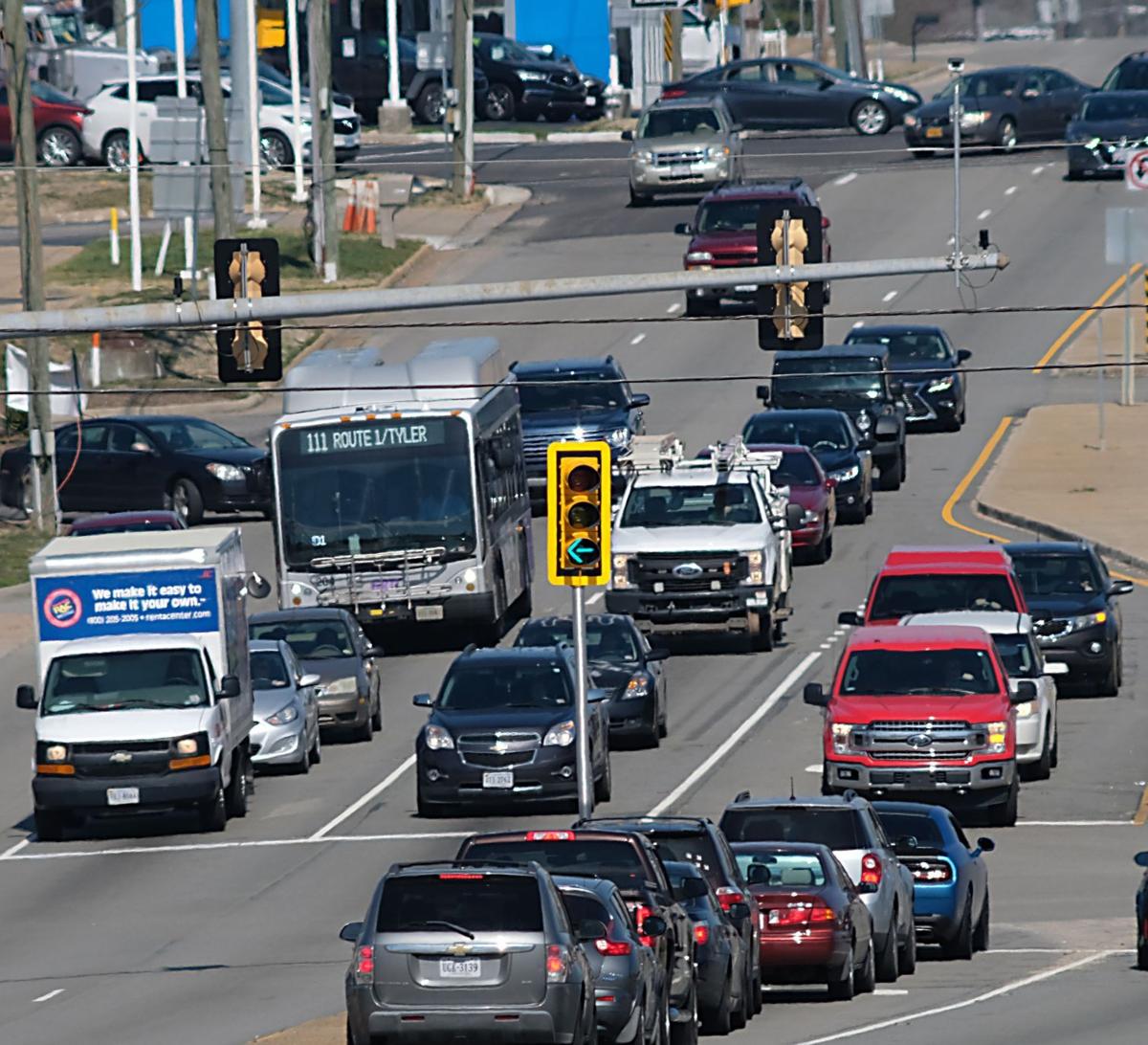 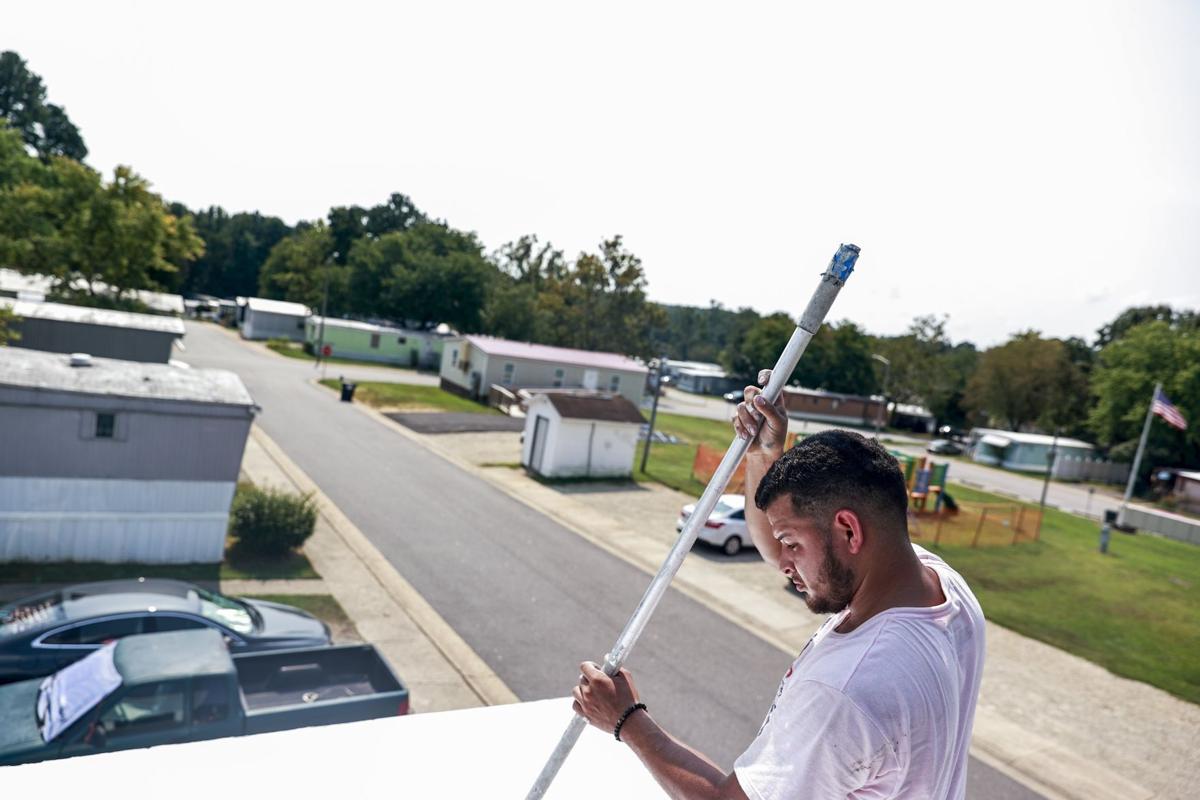 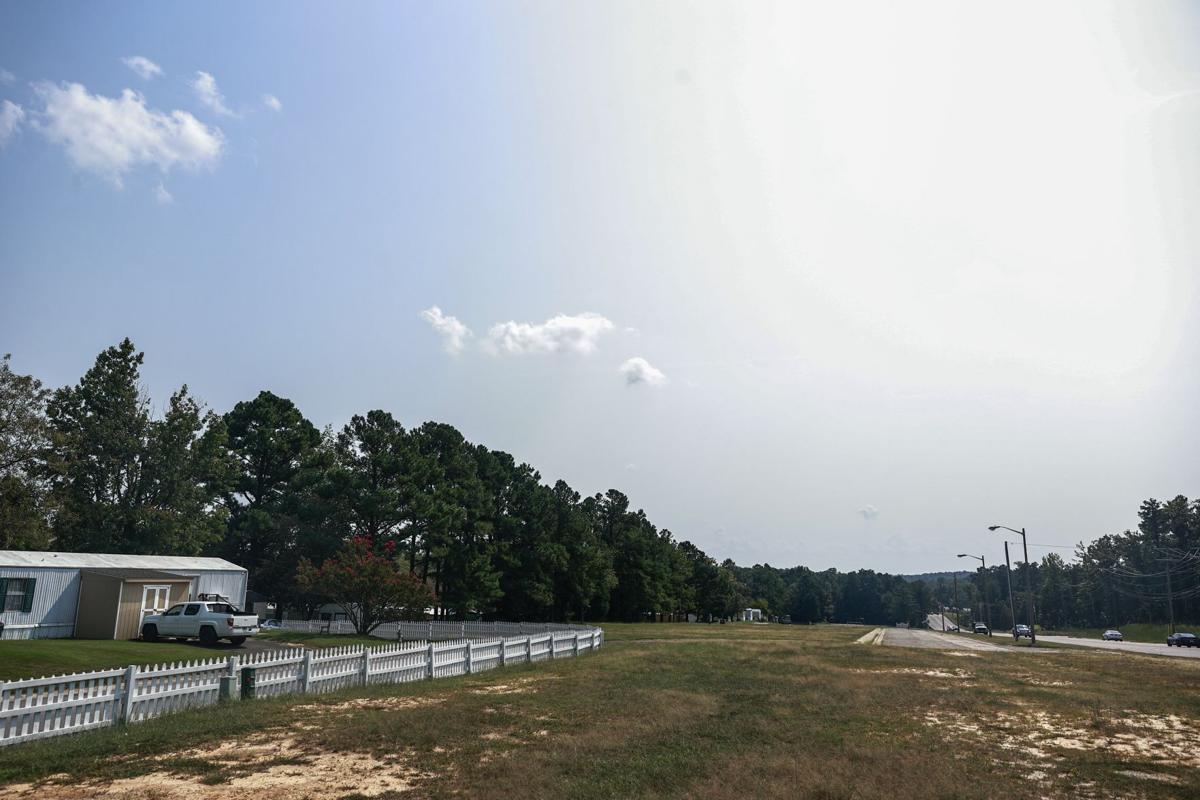 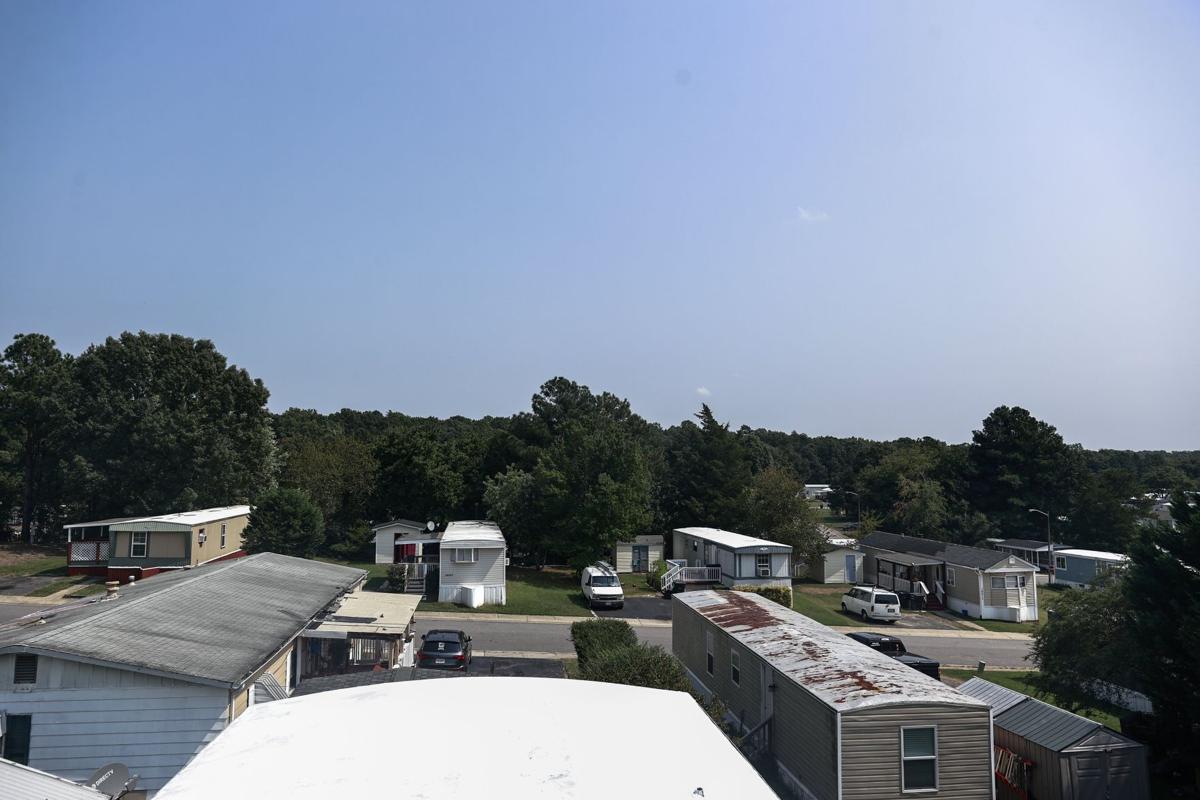 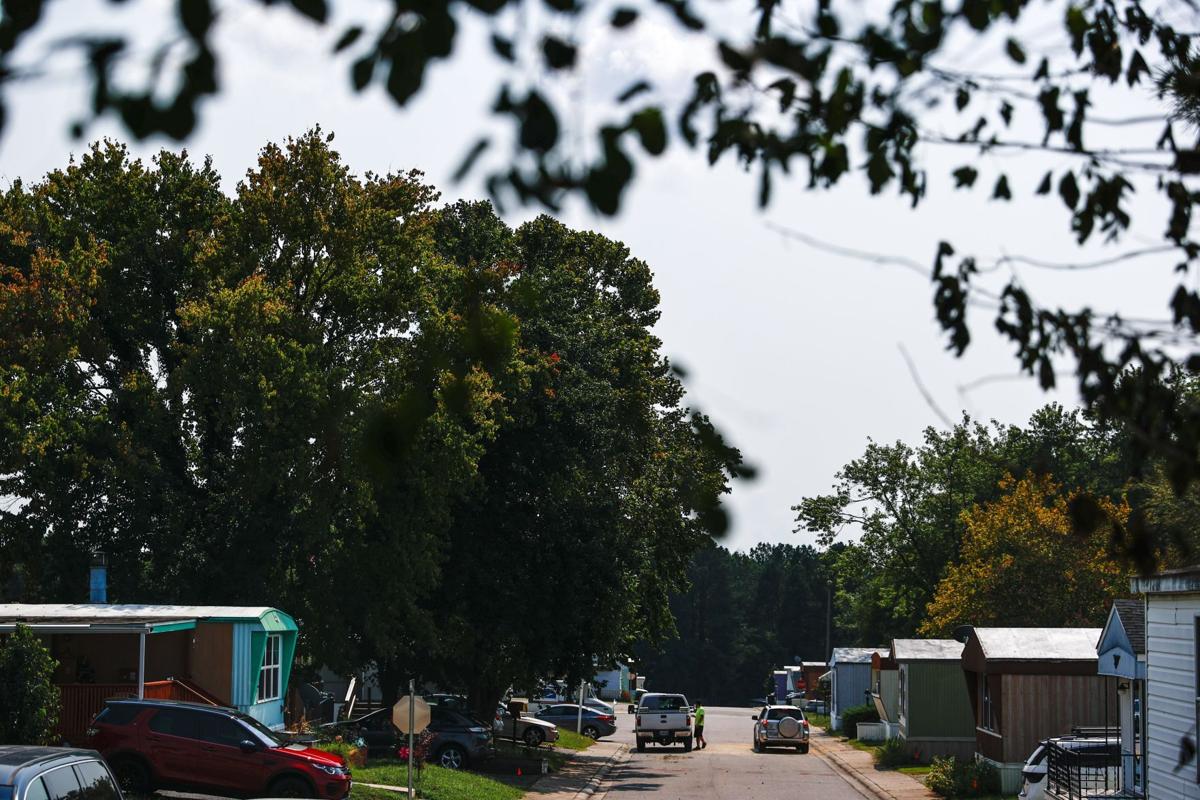 The Greenleigh mobile home park in Chester is more than a mile from a bus stop, forcing some to walk or arrange rides for work or errands.

Pickup trucks, sedans or SUVs line most driveways of the Greenleigh trailer park, but Claudia Rivera says neighbors often need to ask for rides to a job, the nearby Kroger grocery store or Nuevo Amanecer — one of the many Latino supermarkets along this stretch of U.S. Route 1 in Chesterfield County.

The community of more than 500 homes sits about 1.5 miles away from the closest bus stop, the new southern terminus for Route 3B at Brightpoint Community College. The transit company and the county want to extend the line, which recently merged with a pilot route the GRTC bus system launched last year to gauge area interest in public transit.

“Yes, there’s people who need it,” Rivera, 33, said in Spanish, while playing with her 18-month-old son in front of their home near the rear of the park, where the din of Interstate 95 traffic rumbles beyond a narrow screen of leafy trees. “When I didn’t have a car a few years ago, it was the same for me. I had to ask people for rides to the store or work.”

The company managing the property told the county earlier this year that tenants would have little interest in the service, rebuffing efforts that mark a continued pivot for Chesterfield, which historically has been unwilling to allow GRTC routes within its borders but saw ridership for the pilot route exceed targets in its first year.

“The community needs it,” said another Greenleigh resident, who declined to be identified, fearing retribution from the property manager. “I think it would be excellent. ... I’ve seen people walking [to Brightpoint] from here to catch the bus.”

Chesterfield officials contacted Greenleigh’s owner, Chesterfield MHC LC, in December about establishing a stop at the entrance of the community on May 1.

ARCAP LC, a property management company, replied two months later and declined to cooperate, citing financial and staffing constraints due to the COVID-19 pandemic, emergency regulations protecting tenants from eviction during the crisis, and concerns about “traffic safety, lack of signalization, historical lack of tenant interest in mass transit [and] effect on value and future use of the site.”

It’s unclear how the property management company concluded that residents would not be interested in bus service. Messages the Richmond Times-Dispatch left for ARCAP went unanswered.

The director of operations, who signed the letter to the county in February, said Friday that he is no longer affiliated with the group.

The pilot program for the county’s first fixed-route bus service, along the Route 1 corridor, surpassed its goals, officials said, with average weekday ridership increasing from 101 rides in the route’s first three months of operation to 186 rides between April 1 and June 30, according to GRTC data.

Despite Chesterfield’s 50% ownership stake in GRTC since the late 1980s, the expansion of bus service there last year marked a significant change in the county’s approach to public transit.

As Chesterfield’s demographics have changed in the last decade, transit planners and county officials have started to agree that there is a need for public transit service, particularly in the Route 1 corridor, to make jobs, groceries, health care and banking more accessible for area residents who are without cars or reliable transportation.

When GRTC and Chesterfield started collaborating several years ago to build the county route, some respondents to a county-commissioned survey specifically asked for buses at Greenleigh, said GRTC spokesperson Carrie Rose Pace.

“Other than the public comments specifically requesting the Greenleigh stop, the density of residences was also a data point considered for potential transit usage,” she said. “Greenleigh has more than 500 homes and is a significant residential destination along the corridor.”

The Greenleigh community, about 2 miles south of the Bermuda Square shopping center, is home to a large Hispanic community of people from such countries as Mexico and El Salvador.

Potted plants, gardens, bicycles, strollers and toys occupy many of the yards. Families proudly display red-and-black signs for their students who attend or recently graduated from Thomas Dale High School.

While the county bus route did not have service to Greenleigh when it launched in March 2020, transit officials said they felt it was still important to eventually expand that way to provide bus service to an area where hundreds of people in need of affordable housing have settled about 10 miles from the county’s border with the city of Richmond.

Chad Beck, an associate pastor at Chester United Methodist Church who is involved in outreach to the Hispanic community in the area, also thinks bus service at Greenleigh could benefit the community, but said the residents should be consulted.

“I want to make sure that the residents who live there, whose lives would be impacted by this, would have some voice or say in whether it comes closer to their doorstep,” he said in an interview Thursday. “Some residents have cars; some don’t. And there are some who share a car with other family members. ... I’ve seen some residents walking along the highway pushing baby strollers. I think a bus would make it safer and more convenient for them.”

Chesterfield officials tried to buy right-of-way access for the bus stop but were unable to reach a deal. A spokesperson for the county could not immediately say how much they were willing to pay.

GRTC and county officials said they recently pivoted to trying to create a bus stop in the PreCon manufacturing facility that is between Greenleigh and Brightpoint (formerly John Tyler Community College), where the Route 3B bus line currently ends.

Officials said they could not make that work either, though,citing problems bus drivers would have navigating in and out of the industrial campus about a mile south of the community college. GRTC officials said the pavement there, like at Greenleigh, would also need to be reinforced to handle the weight of idling buses.

“While the county remains committed to the future extension of the 3B line further south, transportation staff realize it may take longer to find a safe way for the bus to turnaround that meets the transit needs of our residents along Route 1,” the county said in a statement.

GRTC and county officials say there are tentative plans for a bus stop at a 166-unit apartment development the Better Housing Coalition plans to build across from Greenleigh at the former Colbrook Motel site. That project, however, is at least two years away.

While county officials said there are now no immediate plans to expand bus service past the community college, the county could pursue an eminent domain case to seize part of the Greenleigh property to build the bus stop.

Jim Ingle, who represents the area on the Chesterfield Board of Supervisors, said the legislative body earlier this year authorized the county administration to pursue that option. The county has not been in a hurry to initiate a case because of uncertainty about whether GRTC has the capacity to extend the route if they were to succeed, he added.

“I don’t like eminent domain. It’s not my intention to take it that way. But if all the people there want it and if the owner is being stubborn, I may be willing to go all the way with it,” he said.

Rose Pace said GRTC has enough drivers and buses for the expansion.

""They set out to do it, and they did it," the superintendent said. "It has no place in high school athletics."

Williams: Pharrell Williams is not happy. If his Virginia Beach music festival is to continue, that city's leadership must listen and learn

Pharrell Williams has reeled in a boatload of awards as a recording artist and producer. But the Virginia Beach native’s greatest hit may have…

Jairo Lopes painted a roof in the Greenleigh mobile home park in Chesterfield County on Tuesday. As Chesterfield and the GRTC bus system plan to extend the transit line, the park’s manager has rebuffed the effort, saying residents have no interest.

A conceptual sketch shows the proposed GRTC bus stop at the entrance of the Greenleigh trailer park in Chester.

The Greenleigh mobile home park in Chester is more than a mile from a bus stop, forcing some to walk or arrange rides for work or errands.