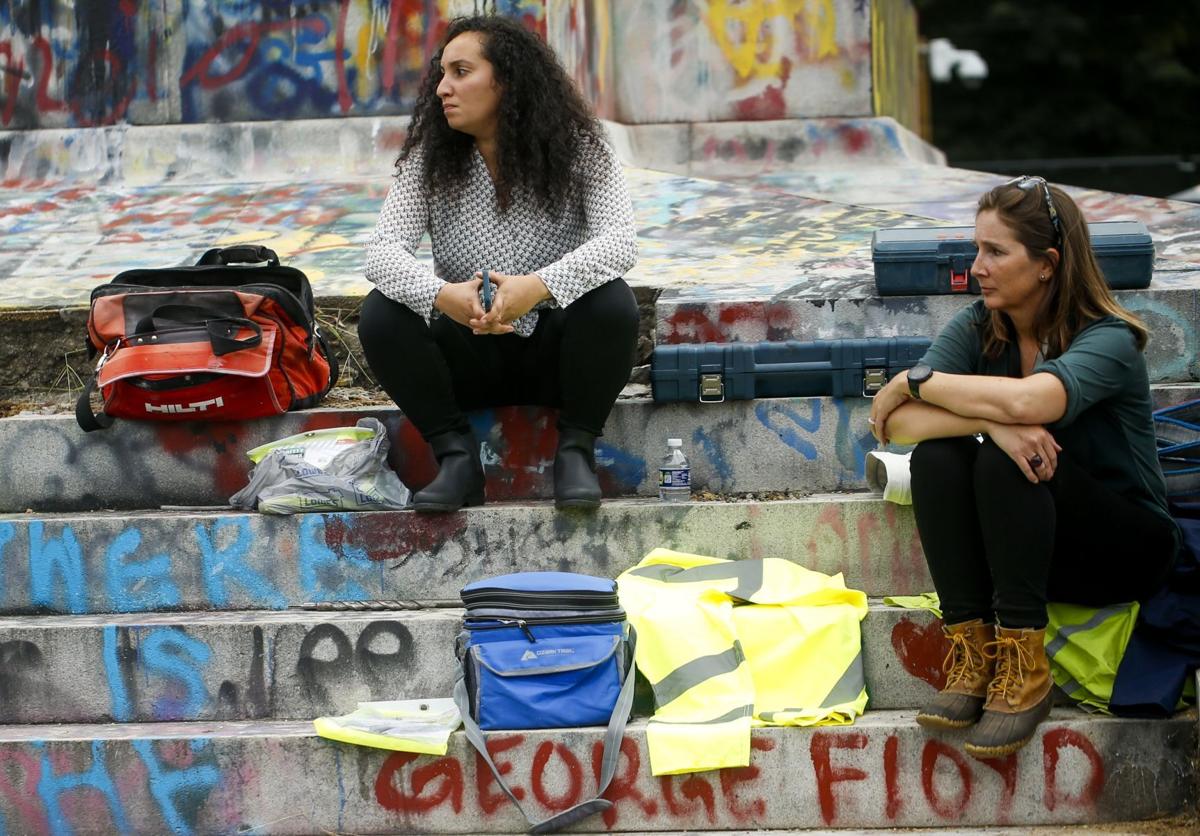 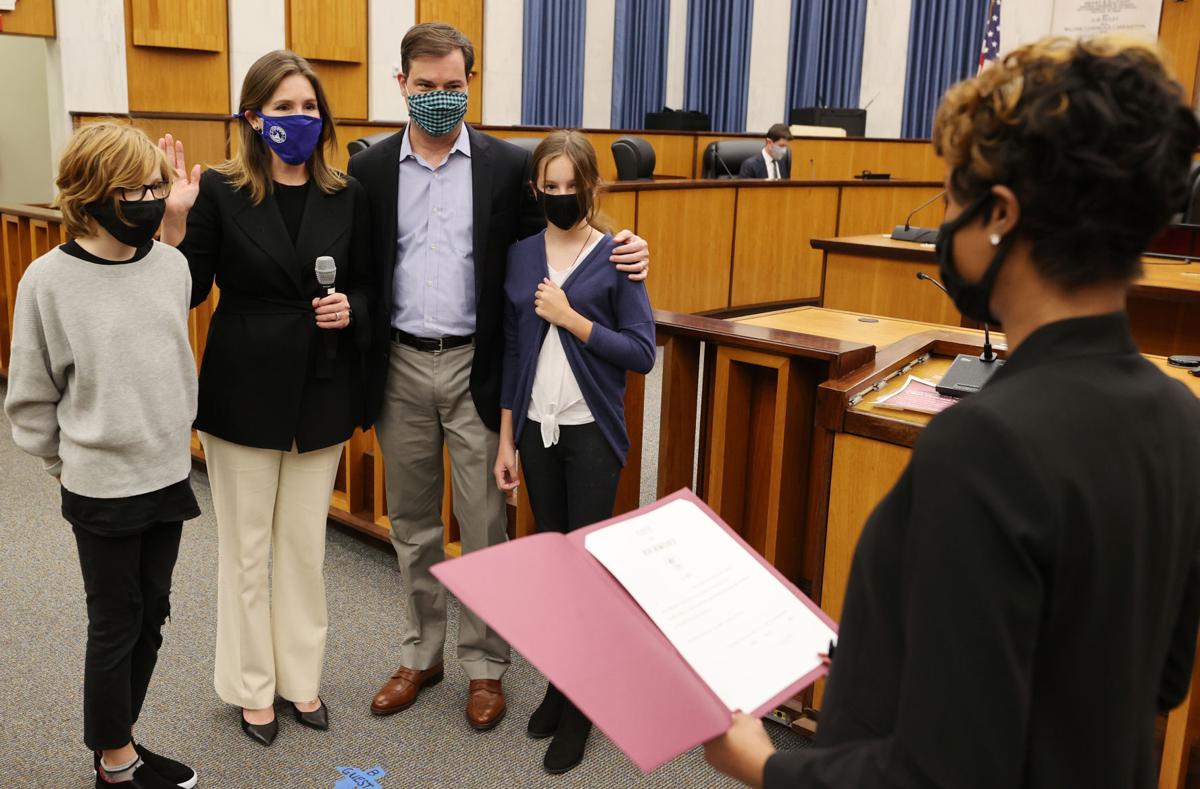 Flanked by family, Katherine Jordan, second from left, takes the oath administered by City Clerk Candice Reid, R, during an organizational meeting in the council chambers at City Hall where the 2 newest members of Richmond City Council were sworn in on Monday, January 4, 2021.

After her first year on the Richmond City Council, Katherine Jordan says she’s pleased that the job has enabled her to highlight environmental issues and advocate for residents of the 2nd District.

A Richmond area native, Jordan and her family returned seven years ago. She said it was during that period that recent political movements for environmental justice and gender equality motivated her to get involved in local civic matters, advocating for sustainable urban design, equal rights for women and better public schools.

After helping organize the March on Monument, a sister event to the 2017 Women’s March on Washington following the inauguration of President Donald J. Trump, Jordan, 47, saw an opportunity to serve her community when Councilwoman Kim Gray announced in 2020 that she would be running for mayor instead of re-election.

Despite the long hours and unpredictable schedule of a City Council member, Jordan says she’s cherished her time on the body so far, spearheading a climate emergency resolution, working with constituents and city officials to reach consensus on future growth plans in her district and casting the only council vote against a casino in the city, among other things.

“The march wasn’t supposed to be an isolated moment,” Jordan said. “It was supposed to be a call to action for people to get more engaged in what they felt passionate about.”

A professional urban and environmental planner, Jordan said she became involved in the Fan District Association and was appointed to the city’s Green City Commission when she stopped practicing her trade to focus on raising her two children. She said the timing of Gray’s decision to run for mayor gave her an opportunity to step up.

“It felt like the moment was right, my kids were at a stage where I could be more focused on trying to get back into the workforce and do other things,” Jordan said. “I felt like I had something to offer the city at the time.”

Jordan’s approach on the council has been much less bombastic than Gray’s, who had a reputation for frequently challenging and questioning Mayor Levar Stoney’s administration.

Nonetheless, Jordan showed ambition last year by crafting a resolution declaring a climate emergency in the city and state, joining approximately 2,000 localities and more than a dozen national governments in calling for action to save the planet from ecological destruction.

The council unanimously approved the resolution in September. Jordan, who grew up wanting to be a lawyer for the U.S. Environmental Protection Agency, said it was important to her that all her colleagues recognize the issue and support the legislation.

“I’m really proud of that specifically because it was community-driven document. We worked with myriad organizations and community activists to have broad objectives,” she said. “We could never capture everything that needs to be done, but I feel like we did a good job of laying out a framework for how we are going to back up the resolution.”

The resolution did not make any immediate changes to city operations, but outlined the existential threat and reiterated the city’s goal of reducing carbon dioxide emissions by 45% from 2010 levels by no later than 2030, and reaching net zero by 2040. It also outlined several objectives, such as the adoption of a plastic bag tax, and a statement about how “the continued operation of the city’s gas utility is an obstacle” to reach net-zero emissions.

Environmentalists cheered the resolution, but a writer for the news and commentary blog Bacon’s Rebellion who lives in the Richmond area said it was disturbing that the city would consider the elimination of its gas utility, which serves approximately 120,000 residential and business customers in Richmond and the counties of Chesterfield and Henrico.

Jordan said she understands why that might trigger alarm for some, but noted that she and other officials would not do that without developing alternative plans to provide warmth and power for homes and businesses.

“I think it’s important for anyone who reads it to read the whole language of it. We need to transition to renewable energy,” she said. “This isn’t about ... disconnecting gas accounts. This is a forward-looking document. We need to create a plan.”

Jordan also stood out in her first year as the only council member to vote against a casino in Richmond.

When the city initially received six casino development proposals earlier in the year, with officials planning to select only one for consideration in a November referendum, Jordan was the first city leader to publicly oppose plans for a casino resort on Arthur Ashe Boulevard at the 17-acre Movieland property in her district.

Jordan said it was a “no-brainer” to oppose the project, knowing that many of her constituents were against it. She said she also felt that the size and scale of the proposed $600 million development would be overkill next to the Diamond baseball stadium and the popular Scott’s Addition entertainment district.

“That was a terrible location,” she said. “I told the project team, ‘if you’re serious about building a casino in Richmond, you need to find another site because this is going nowhere.’”

Jordan said she was impressed with the development plans for a slightly less expensive casino resort in South Richmond and got along with the team pitching it. Still, Jordan said she couldn’t get past her own personal objections to casino gambling.

Richmond voters narrowly rejected the One Casino and Resort project by a margin of about 1,500 votes this fall.

When Jordan voted against the casino plan in June, 8th District Councilwoman Reva Trammell slammed her for going against the project in her district, which she and other project backers said would revolutionize a neglected and impoverished part of the city.

“While I knew everyone else was going to vote yes, I thought there needed to be at least one voice for a very large chunk of people who were not OK with it,” Jordan said.

As her second year on the council begins to ramp up, Jordan said she intends to focus on traffic safety, implementing plans for the climate emergency resolution and continuing to help residents and businesses recover from the COVID-19 pandemic.

“What I like about Katherine is that not only does she look at what’s important to the district, but also the impact of the city as well,” said Jerome Legions, president of the Carver Civic Association in the 2nd District. “I’m really happy with the way she’s been acting as our council person.”

Zoning issues and development are also likely to continue taking up her time, especially as the city is seeking development proposals to replace the Diamond and foster growth around it.

Jonathan Marcus, a resident of the Fan District and president of the RVA Coalition of Civic Association, said some neighborhood residents also remain frustrated about new zoning regulations the city adopted last year to encourage high-density development along the West Broad Street corridor.

Nonetheless, Marcus said he and others have found Jordan to be a committed representative for their community.

“She did her homework and listened to the interests of the various groups, including the neighborhood,” Marcus said. “I don’t think a perfect outcome was going to be possible, but I appreciate her thoroughness.”

“I’ve been pleased working with her. She’s very thoughtful.”

Flanked by family, Katherine Jordan, second from left, takes the oath administered by City Clerk Candice Reid, R, during an organizational meeting in the council chambers at City Hall where the 2 newest members of Richmond City Council were sworn in on Monday, January 4, 2021. 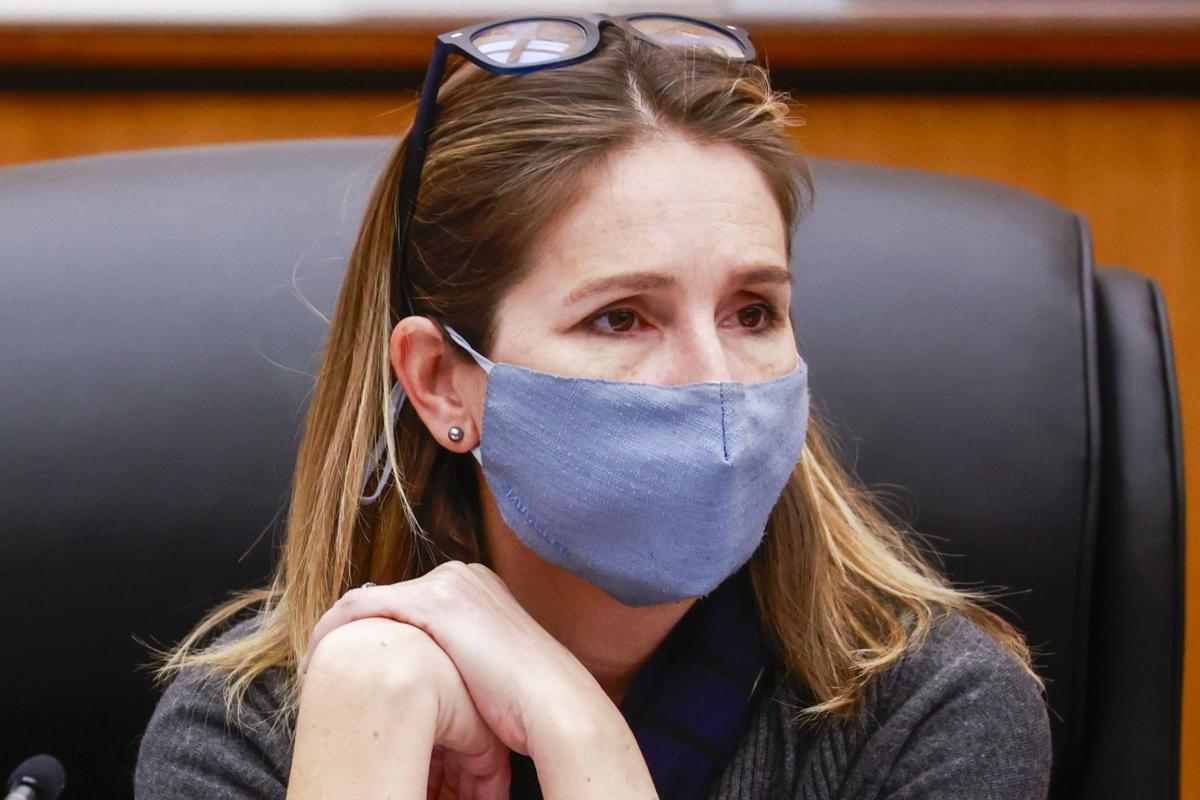