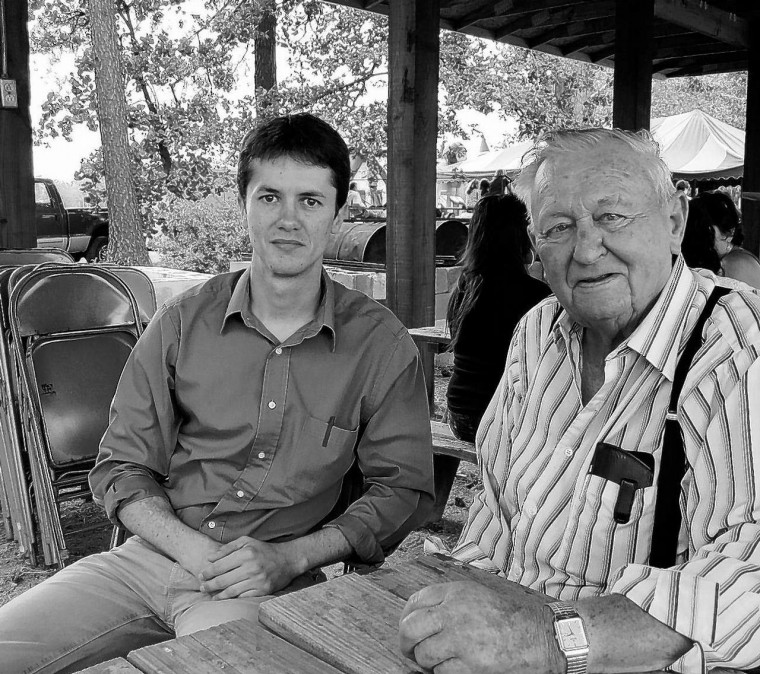 The author with Joseph W. Hanzlik at the St. Wenceslas Day festival in New Bohemia in September 2010. 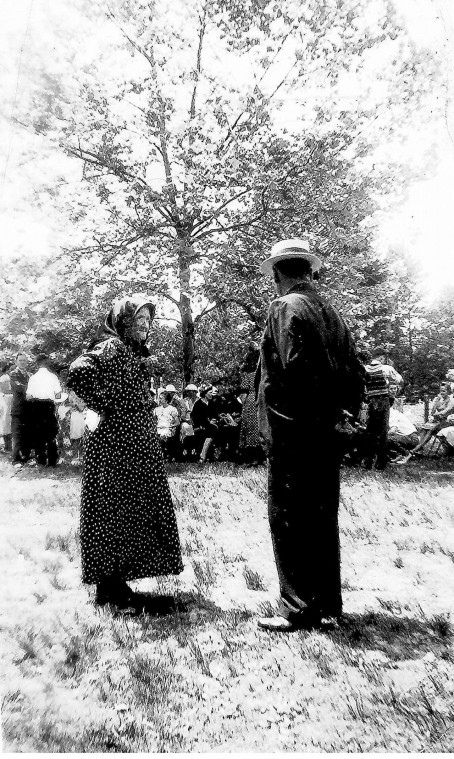 Czechoslovak parishioner Frantiska Blaha and an unknown man at a church social in the 1930s.

Polka dances in Prince George County? Decades ago this was a regular weekend occurrence in rural communities some 30 miles south of Richmond.

Drawn by land agents, these industrious Czechoslovakian farmers would provide the transition to the new era of farming. Called "Bohunks" by native Virginians, they initially were not welcome.

These communities were centered on the various church denominations. They included Baptist, Catholic, Congregationalist, Lutheran and Presbyterian churches. Up until the 1950s, their memberships were exclusively immigrant.

Eventually, through hard work and perseverance, they became a part of the local community. As their economic station in life improved, they became more assimilated to mainstream American culture.

In the post-World War II boom, farming as the primary occupation gave way to opportunities in nearby cities. People from the Czech and Slovak communities went on to work in factories and at Fort Lee, started businesses and began to hold positions in local government. Their story of assimilation is parallel to the story of the loss of small-scale farms in America.

As a native of Prince George County, I recently embarked on an oral history project to record the experiences of the elder Czechoslovaks. While their parents' and grandparents' generations have been well-documented, this generation had not been studied as much.

Those interviewed grew up in the Great Depression, served in World War II and saw our country become a superpower. This generation proved to be quite pivotal, and their story of assimilation deserves documentation.

More than 30 people were interviewed, and their ages ranged from 76 to 93 years old. Amazingly, many could remember events from when they were only 3 or 4 years old. More than one recalled "chopping peanuts" as a youth, working in the fields with their family.

Based on the interviews, they had much in common. For example, this generation is possibly the last one to understand their ancestors' language, let alone still speak it.

Most had a good sense of their cultural identity as a people. They spoke of their forefathers being hard working and honest, traits that they hold in the highest regard.

Similarly, they conveyed how the Czechoslovaks were known for being thrifty and frugal in order to survive. Humorously, many recounted how Czechoslovaks enjoyed spirited discussions or even arguments about trivial matters, such as farming techniques.

One woman recalled, "Now the old farmers who loved to get into arguments — that was typical. They didn't have many of them, so they had to think of something to rile up everybody."

They also lamented experiences and customs lost. As a musical people, the Czechoslovaks used to hold regular church dances. Many marriages began from a simple dance at these popular social events.

Family bands used to play polka music and other popular tunes in the 1950s and 1960s. Nearly all talked about how families used to visit one another on weekends. This loss of familial visits may not necessarily be unique to the Czechoslovaks, as this has changed in modern society as well. Distractions from everyday life and a faster-paced lifestyle have helped to erode close family ties.

In addition to the fading use of native languages, many family surnames have died out. Those interviewed are truly a transitional generation. Many of them had one foot in their parents' native culture and one foot in mainstream American culture. As teenagers they were often caught in the middle between pressures from family and the influence of their Virginian peers.

What I found most rewarding from the interviews was learning the individual stories. A few had tried to dissuade me by saying they did not know much. However, their individual life stories are important, especially to their families. After all, the younger generations did not live through the interesting times that the older generation had.

I challenge readers to find an area of interest to record for future generations, even if it is your own family's story. Some interviewed had family history documents created for their grandchildren. Once our cherished elders are gone, their valuable memories of times past leave us as well.

The author with Joseph W. Hanzlik at the St. Wenceslas Day festival in New Bohemia in September 2010.

Czechoslovak parishioner Frantiska Blaha and an unknown man at a church social in the 1930s.