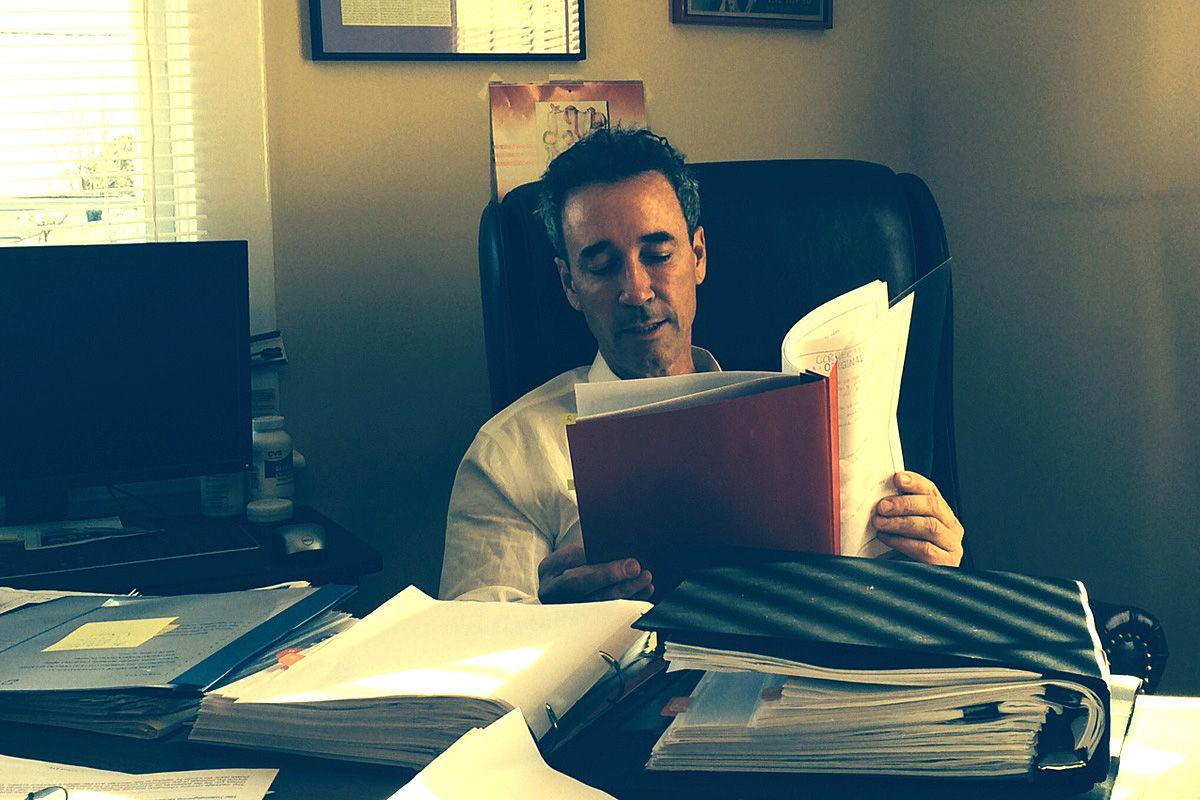 Less than 24 hours after he was sent to jail, Joe Morrissey was back in his law office, on work release. 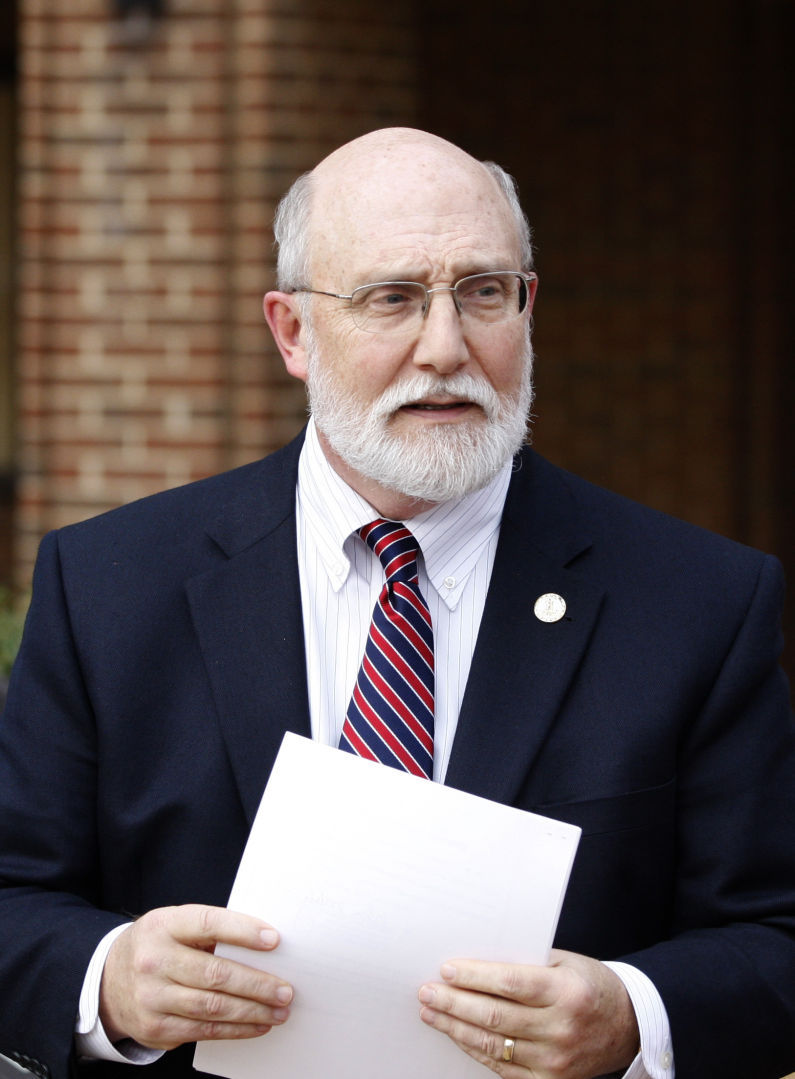 An unrepentant Joseph Dee Morrissey, one day after being sentenced to jail, vowed Saturday to file a civil suit against those who he says conspired against him.

In a two-hour interview with the Richmond Times-Dispatch at his Highland Springs office, Morrissey said he plans to bring to the public’s attention his full innocence regarding his relationship with an underage office assistant.

The House of Delegates member said court proceedings will reveal how he was targeted by police and victimized by a lovers’ quarrel. Morrissey, D-Henrico, said he entered a plea Friday in order to preserve his young daughter’s future, as well as his own.

Morrissey explained what he believes would have happened had he gone to trial, reading from court documents and witness exhibits and showing evidence that he said proves his innocence.

He had gotten a ride to his law office Saturday from a friend, leaving Henrico County’s Jail East in New Kent County, 26 miles away, at 6 a.m.

“I am a fighter; I’ve always been a fighter, and I will show the public what really happened in this case,” Morrissey said. “I’m going to have my day in court.”

Morrissey, 57, entered an Alford plea on Friday to a single misdemeanor count of contributing to the delinquency of a minor and was sentenced to 12 months in jail, with six months suspended. By entering an Alford plea, Morrissey did not admit wrongdoing but acknowledged that the prosecution had enough evidence to convict him.

After Friday’s hearing, he immediately went to jail to begin serving his sentence, which will allow him to engage in a work-release program and maintain his legislative and legal duties.

He is eligible to be freed in 90 days because an inmate serving a misdemeanor sentence earns credit of one day for each day served. He had potentially faced more than 40 years in prison.

Special prosecutor William Neely said Saturday that, had the case gone to trial, the prosecution’s experts would have testified that the cellphones of Morrissey and the then-17-year-old girl placed them together at the time the sexual relations between the two allegedly occurred in August 2013.

Neely emphatically stressed that the prosecution’s evidence would have shown that both Morrissey and the girl sent text messages stating that the two had had sexual intercourse the night of Aug. 20, 2013.

But Morrissey vowed that his relationship with the girl, who was a receptionist in his office, was not sexual; that he believed she was 22 years old, based on her own assertions and job application; and that he will file a civil suit against those whose testimony helped bring him to trial.

He denounced Neely, who oversaw a special grand jury this summer that issued a multicount indictment against Morrissey.

Among the items Morrissey said he would have introduced had he gone to trial is a blowup of the job application form of the teenager whom Morrissey hired as a receptionist and who was the alleged victim of Morrissey’s sexual advances. The exhibit shows a birthday in 1991, five years before her actual birth. The prosecution would have argued that Morrissey knew or should have known her actual age.

Morrissey said the alleged victim will come forward to disclose a conspiracy from a jilted lover who hacked volatile text messages and images into various cellphones. The texts and images became the foundation of the case against him, Morrissey said.

Morrissey also presented a map of the Greater Richmond area illustrating his and the receptionist’s locations, based on cellphone usage and pictures, the night of Aug. 20, 2013. That is the night that Morrissey and the receptionist allegedly had sexual intercourse at his office, prompting an alleged text message from the victim that she had just had sex with her boss. “OMG,” it began.

The map, as well as photographs, show that the receptionist and Morrissey were together at a Farm Bureau event in Charles City County at 8 p.m. The time can be seen on the teenager’s watch in one of the photos.

According to Morrissey’s defense exhibits, she then traveled back to Richmond and on to her residence in Chesterfield County, while Morrissey headed northeast of the city, where pictures and other evidence show that he was with witnesses, including a minister, who could corroborate seeing him alone.

Three days later, on Aug. 23, Morrissey was with the teenager at his home near Virginia Center Commons when police arrived. The girl’s father had asked for police help in removing her from Morrissey’s home. The investigation into their relationship began that night.

Morrissey also said investigators are aware that there is a recording the receptionist made of a former friend describing how she hacked into cellphones to plant false information and pictures.

Morrissey said he does not foresee his jail sentence impeding his law practice or his plans to file the civil action against people who he said conspired against him and the teenager. He denied having sex with the now-18-year-old but declined to discuss her pregnancy, which was revealed by Neely at a news conference Friday.

“It wouldn’t be appropriate” to discuss her condition, Morrissey said Saturday.

Morrissey — whose long career is laced with self-destructive acts that he has had to overcome, from a brief jail term for a courthouse fight to a revoked law license — said the latest ordeal has simply hardened his resolve not to surrender.

He likened the 90-day jail sentence to a setback in high school in Arlington County in 1975. An injury threatened his wrestling career toward the close of his last high school season. He ended up winning the state championship. Back then, Morrissey weighed 107 pounds.

“I’m not backing away from a fight,” he said yesterday. “I don’t give up, and I’m going to have my day in court.”

Later on Saturday, the road ahead grew a bit more difficult, when key House Democrats in the General Assembly and Gov. Terry McAuliffe called for Morrissey to resign his House seat.

Neely said Friday that he is obligated to forward investigative documents to the Virginia State Bar, which could set in motion another review of Morrissey’s law license.

But within the sanctity of Morrissey’s office, which is festooned with reminders of his notoriety, Morrissey projects an image of a boxer charging forward at the opening bell, rather than a fallen fighter blinking skyward at a referee’s 10-count.

Among the mementos is a cabinet of 12 boxing gloves autographed by world champions, and a

T-shirt is inscribed with “To err is human, to lose is unheard of ...”

“I feel like a little kid getting hit by his big brother but who knows his day will come,” Morrissey said. “I’m not distracted. I have an ability to compartmentalize and take things as they come. I stay focused.”

His work-release terms allow him 10 hours a day of work, seven days a week, he said. So he can return to jail each night in his trademark Jaguar as late as 10 p.m. Breakfast is at 4:30 a.m., and he’s confident that if the General Assembly meets late into the night he’ll be OK. A GPS monitor tracks his whereabouts.

So he will fight to keep the law license, fight to keep his 2-year-old daughter well cared for, fight to show the public the truth, fight to preserve the integrity of the receptionist, and fight his adversaries and the governor in the General Assembly.

All of which belies the bumper sticker on the rear of the Jaguar with House of Delegates license plate number 41: “I’d rather be fighting global warming.”

But Morrissey — at least part of the day — could not be in a more appropriate place to keep his spirits up. The longtime criminal defense lawyer said he’ll always recall the greeting he received from inmates Friday when he was booked at Henrico County Jail West after sentencing.

“There was clapping and shouting,” Morrissey said. “You can imagine the hooping and hollering. They said, ‘Fightin’ Joe is with us now!’ ”

Morrissey to address demands by McAuliffe, Democrats that he resign

Del. Joseph D. Morrissey plans to appear before a church congregation this morning in Richmond, where he will address the demands of fellow De…

Morrissey withholds decision on whether to quit House

Lawyer-legislator convicted of contributing to the delinquency of a minor talks with reporters after church service Sunday, adds that he is intent on filing a civil suit.

Less than 24 hours after he was sent to jail, Joe Morrissey was back in his law office, on work release.