My experience with racism began early.

When I was 5, I started school at Cooper Elementary in Clayton, N.C., and I later attended Cooper High School. My schools and community were segregated and unequal. As a small child, I recited a poem at church about the forced segregation of schools that I still remember.

When I was in the 10th grade, my family moved to Raleigh, where I attended, along with eight other Black students, one of the best white public schools. Social isolation and racial taunting with the n-word were my first experiences with integration. I graduated with honors but felt separate and unequal on many days.

I enrolled in college at North Carolina A&T State University, a historical Black university, where the Greensboro Four successfully led the Woolworth lunch counter sit-in. From there, nonviolent protest spread across the nation.

In 1969, while I was studying, the campus was surrounded by police and National Guard troops. Over three days, 600 troops were on campus, along with tanks and helicopters. Eight students were wounded, one died, and others were arrested.

The scars of the largest military presence on a college campus was memorialized with over 60 bullet holes on the side of two men’s dorms.

I’ve listened to the words of Dr. King and other voices of the civil rights struggle. Read about protests and the death of Emmett Till. Heard stories of beatings and lynchings by ordinary white citizens, police and hate groups.

While these horrific events were part of my experience in a racialized America, I can’t discount the accumulating physical and emotional effects of institutional racism. I’ve felt the cost of being the first in my class, first faculty member, first dean. I paid the price of living up to higher standards, working in subtle hostile environments and overcoming the image of the stereotypical angry Black woman.

Progress has been made, and I have benefited from it. I’ve achieved middle-class privilege as a first-generation college graduate and employment as a university professor. I’ve been blessed and have cracked glass ceilings, only to find that there were others above — thicker and higher.

I have witnessed the deaths of Black men and women by overly aggressive police officers. I gave the “talk” to my son and cautioned my daughters on how to interact with police. The recent death of George Floyd is just the latest.

However, I’m not numbed by violence. I’m angrier and disappointed that injustice has endured for centuries without resolution. I’m tired of poverty and unequal access to quality education, affordable housing, decent jobs and health care.

I pray that we are at a turning point in this nation. In the past, religion has been bedfellow to bondage and annihilation. People seemingly held strong beliefs in God and professed Christian values while depriving others of their human rights. Self-interest and greed have co-existed and overpowered love for neighbor. Generations of whites have benefited and profited from these past exploitations.

This is not the kind of faith to embrace. Faith is the substance of things hoped for, the evidence of things not seen (Hebrews 11:1).

This is my story, although it’s not unique. Other African Americans have experienced similar or more disturbing stories. Painful stories give us reasons to talk about resurrecting the soul of this nation, a soul dead to its founding promises.

We need to expunge hatred, prejudice and discrimination from its core. We require a soul that cares for the humanity of others. A soul that values the worth and dignity of all human beings regardless of race, ethnicity, socioeconomic status and gender identity. I want a soul grounded in religious values.

This rebirth cannot be done by legislation and social protests alone without changes in hearts. We must be open to the pain and agony of others in a visceral way. Moral outrage must be translated into moral action.

As a nation, we must seek faith that allows regret, apology, repentance, reconciliation and forgiveness. In other countries, Germany and South Africa tried reconciliation in the 1990s. We can unite and move forward to co-create a just America and put our national movement into action.

My hope is for reparative justice and that we will listen respectfully, follow the commandment to love thy neighbor as thyself and heal the soul of these United States. We must be bold and have a soul revolution. We should seek real solutions to real problems. Have faith, hope — and believe.

Inez Tuck is a spiritual counselor, consultant, author and nurse professor emeritus who lives in Richmond. She can be reached at ineztuck19@gmail.com.

INEZ TUCK ….. I share your sorrow … Like Ernest T. Bass used to say when talking about the weather …. “I was right out there in it”. I was too, working in Greensboro., Hey, I even used to eat at Woolworth’s till someone make it a statue of sorts so folks would not forget history …. Not sure why, but it is still standing …. I guess it is further down the list of things that need to go.

A friend of mine, who died some time ago, was even closer to it than myself, he had a painful reminder for years as the result of a brick thrown from a window of a dorm at NC A&T, when he was a Guardsmen, trying to keep the peace.

But …. Inez … I fear your dream of “It’s time for a revolution of the soul”, will have to wait till the “Revolution of Revenge is completed” …. which your guess is as good as mine as to when that will be. Period.

Thank you for sharing your story, Ms. Tuck... Greensboro, N.C. was one of the most racist cities in the entire South... In 1979 there was a protest and several of the protesters were shot by KKK low-lifes who shot them from the side of the street and no charges were ever brought... Morris Deese of the Southern Poverty Law Center said the only time he was ever scared in a courthouse was in Greensboro... So you survived the worst of the worse... Sadly, the "worse" are everywhere... And yes, we have a serious morality gap in America and have a long way to go... ~~~ Bob

~~~ Bob ..... I lived in Greensboro for 30 some years, and you didn't so that means it was less racist than it could have been if you had been there.

Youse would be proud if you lived there now …… The Rev. Nelson Johnson still lives there and he was the one history will credit with “daring the KKK to come to a rally being held by the Communist Workers Party, welcomed by those in a black neighborhood, that ended up with lots of blood flowing … It too is now a shrine of how well humans react to a dare.

Also, the City Council now has no white men, two white women and the rest are people of color .... Maybe after Richmond goes down, you could ease on down that way and be accepting as another great American whose love overflowed. Period. ~~~ Tracy 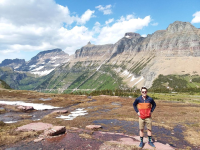 Powerful article. I hope this sinks in for those still on the other side of this debate. Thank you for your contribution!