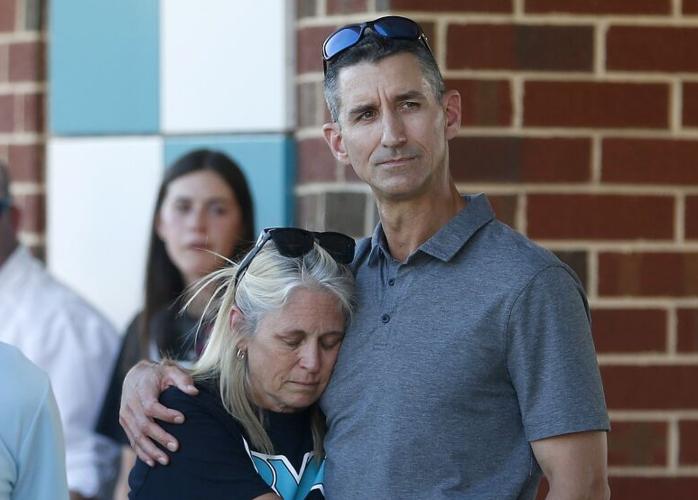 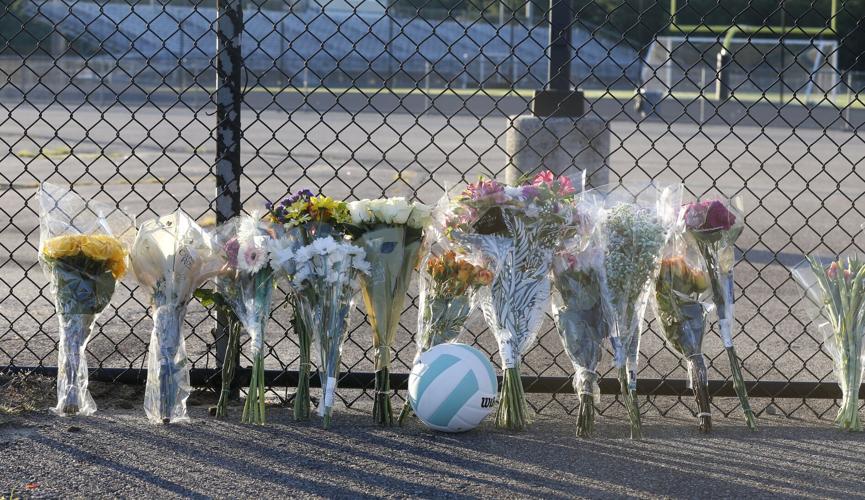 Flowers and a soccer ball were placed at Glen Allen High School on July 3 as a makeshift memorial for student Julia Budzinski, who died in a boating accident the previous day. 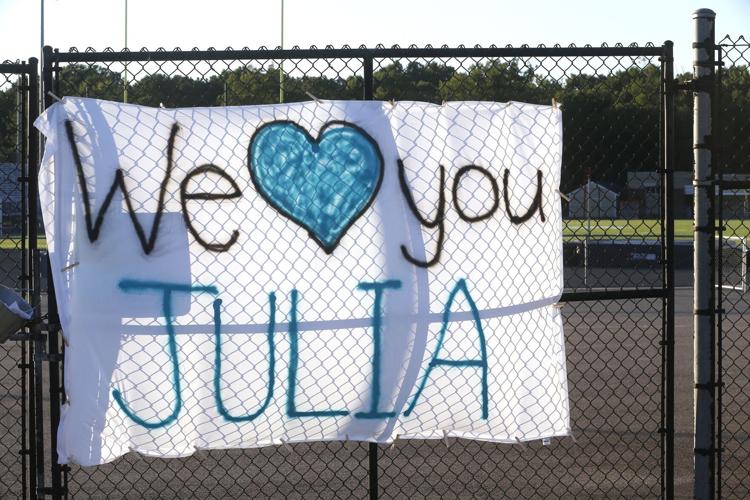 A banner was placed on a fence by the Glen Allen High School athletic field Sunday to remember student Julia Budzinski, who died Saturday in a boating accident.

As family and friends of Julia Budzinski continue to mourn her death in a Saturday boating accident, the mother of the 17-year-old Glen Allen High student addressed the crowd that gathered Sunday night at the school in remembrance of the teenager.

“She had just the best year. She had an awesome year,” Monica Budzinski said of her daughter.

Monica Budzinski said she spoke with Julia on Saturday before the accident and “it was a very happy, fun last day on earth for her, sadly, obviously. But it was happy, laughing, having a good time.

“That’s the way I’m going to remember her, and that’s the way everybody needs to. She loved life. She loved being outside, sports, everything. She’ll live on through all you guys.”

Budzinski was a rising senior who played varsity soccer and volleyball at Glen Allen, was vice president of the school’s National Honor Society chapter, volunteered with organizations that assist individuals with developmental, intellectual or physical differences, and was involved with the Fellowship of Christian Athletes.

She died during a recreational trip to the James River. According to Paige Pearson, the public information officer for the Virginia Department of Wildlife Resources, Budzinski and another rider were being pulled by a boat on a tube and fell off the tube.

Pearson said Monday that as the boat, operated by a family friend, turned back toward the other tube-rider and Budzinski to pick them up, she was struck by the boat. Pearson said her understanding of the situation is that a wave came and moved the boat, which caused the accident.

Budzinski “was recovered very quickly,” said Pearson, who added that a final report had not been completed.

Luchel Sylvain coached Budzinski in recreational league basketball and then later during AAU competition, through the RockIt Sports organization in the Richmond area.

“First thing, she was just such a doggone good teammate,” an emotional Sylvain said Monday. “It was an absolute pleasure every single time going to practice, or workouts, or games, with her. She always had an unbelievably positive attitude, and she was a competitor with a no-back-down attitude.

“You could just feel her energy from three miles away, just exhilarating. Every time she came to the gym, she was ready to work, but she had fun in everything she did.”

Jac White coached Budzinski through three years (under 15 to under 17) of Richmond Kickers competition — a spring and a fall season each year — and he described her Monday as “a great athlete and even better person. She was always positive. She was humble. There wasn’t a person that didn’t like her.

“She was always happy. She was always laughing and smiling and working hard. ... She always brought an energy that was uplifting. ... She held herself to a high standard.”

Monica Budzinski and Mark Budzinski, Budzinski’s father, are University of Richmond graduates. Mark Budzinski, a former professional baseball player who reached the big leagues with the Cincinnati Reds in 2003, is in his fourth season as the first-base coach for the Toronto Blue Jays.

Ms. Budzinski was recalled as teenager with a fondness for sunsets, and a loyal friend who loved to laugh.

Flowers and a soccer ball were placed at Glen Allen High School on July 3 as a makeshift memorial for student Julia Budzinski, who died in a boating accident the previous day.

A banner was placed on a fence by the Glen Allen High School athletic field Sunday to remember student Julia Budzinski, who died Saturday in a boating accident.