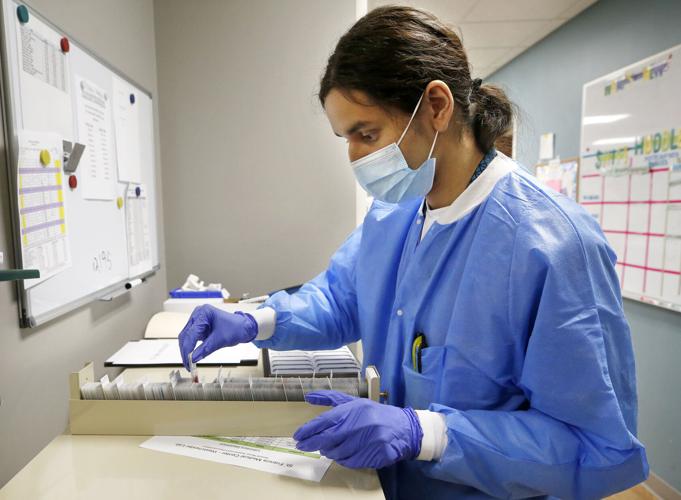 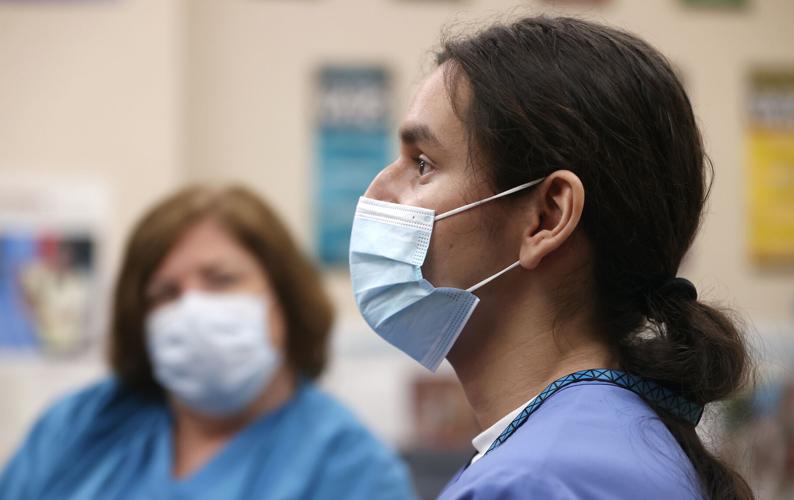 Nancy Paul listens as Xander Ferguson, a recent graduate of the Project SEARCH program, speaks with a reporter at St. Francis Medical Center where he works in the laboratory. Paul is an employment specialist with the program at VCU’s Rehabilitation Research and Training Center. Photo was taken on Tuesday, June 14, 2022. 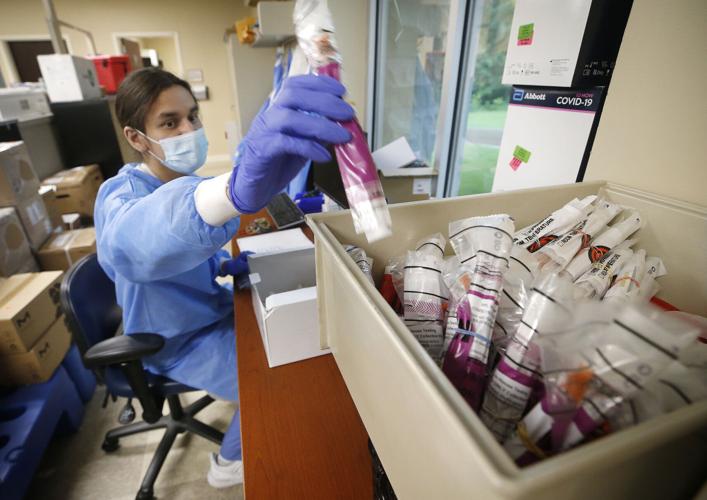 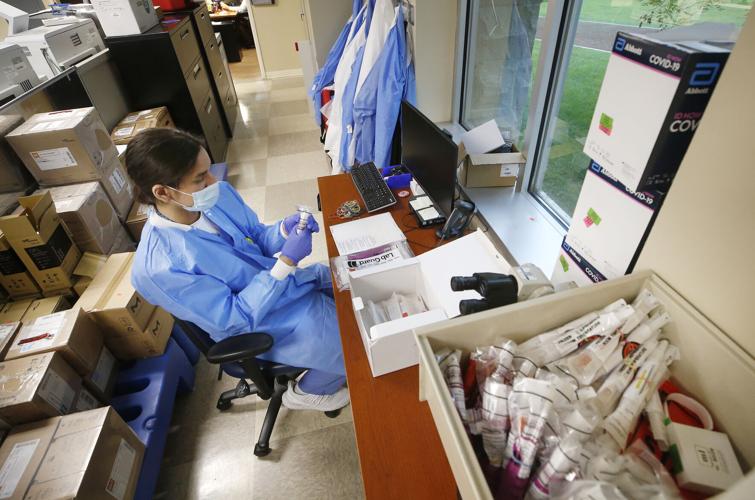 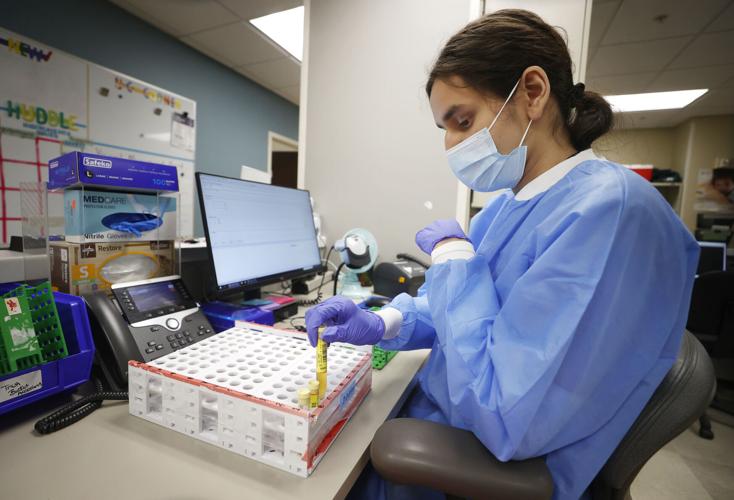 Xander Ferguson graduated from the Project SEARCH program in May. He works in the lab at St. Francis Medical Center in Chesterfield County. 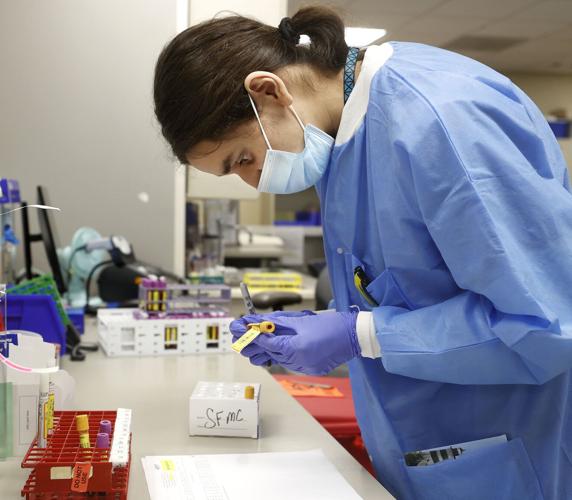 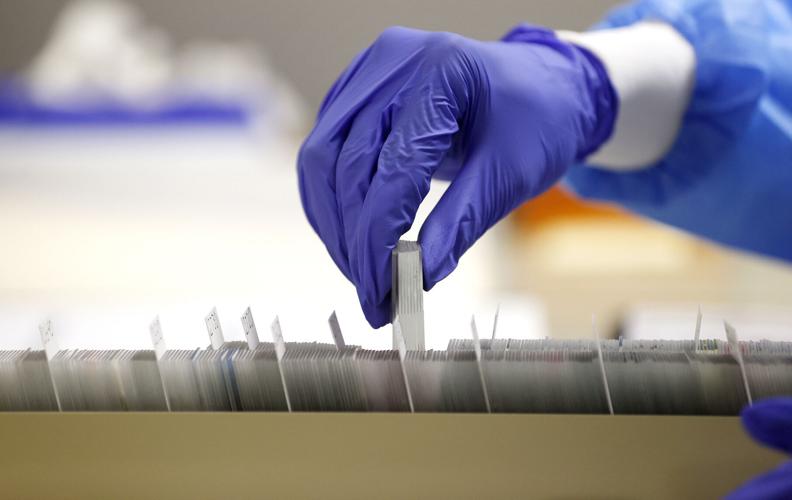 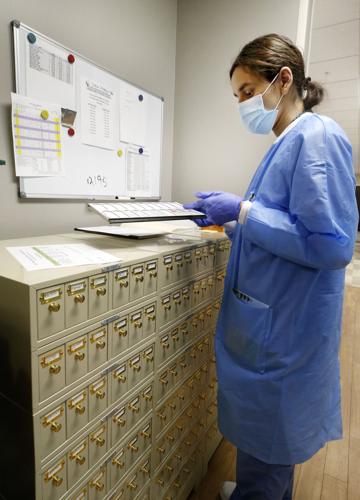 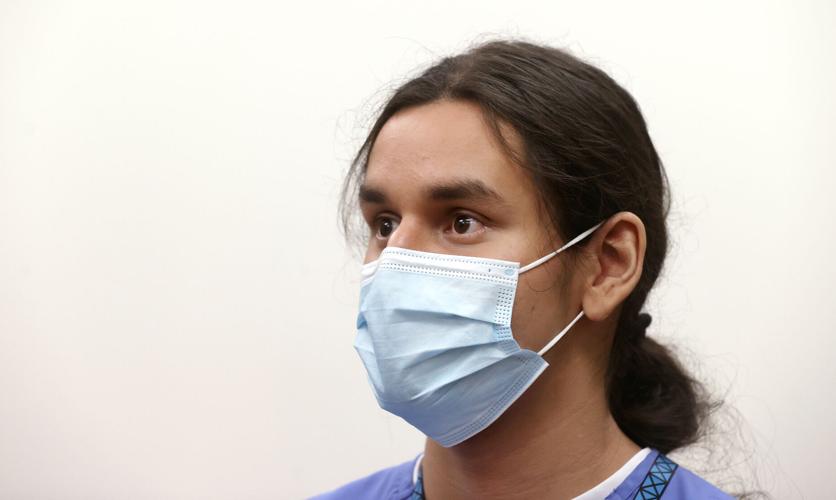 Xander Ferguson, a recent graduate of the Project SEARCH program, speaks with a reporter at St. Francis Medical Center where he works in the laboratory. Photo was taken on Tuesday, June 14, 2022.

In the main lab on the first floor of Bon Secours St. Francis Medical Center in Chesterfield County, machines beeped and whirred with activity as hospital staff worked late Tuesday morning. It was a busy scene.

One staffer was preparing specimens to be transferred to Bon Secours St. Mary’s Hospital in Henrico County. Wearing a blue medical gown and mask with hair pulled into a ponytail was Xander Ferguson, 18, who was putting the tracking information on the vials. In the lab, he can usually be found filing slides, making COVID-19 kits and scanning in lab specimens.

“Once the last names are on there, mark it off with a check,” he said, walking through the instructions as he carried them out.

Once the preparations were done, Ferguson put the vials in a refrigerator that had a basket for specimens that were ready to be transported, completing the task in only a few minutes.

“I love it,” Bertha Truman Smith, a lead medical laboratory assistant technician working alongside Ferguson, said. She was sitting in the break room located at the back of the lab.

“He’s very attentive,” she said. “He’s a perfectionist, actually. He listens when we give him instructions, and he knows exactly what he needs to do.”

Ferguson and five others graduated from Project SEARCH, a national school-to-work program for students with autism spectrum disorders, intellectual and developmental disabilities, this past May. The program provides “hands-on training to students with disabilities through internships at health care facilities and other businesses, with a goal of employment in a business that matches their skills and preferences upon completion of the program,” according to a news release from Bon Secours.

Through the program, students take on three internships over the course of about nine months. Their schedule at St. Francis coincides with the academic calendar for Chesterfield County Public Schools. The internships are meant to help students determine what they want to do with their careers.

Project SEARCH is operating at four Bon Secours sites within Virginia, three in Richmond and one in Portsmouth. Local public education systems, Virginia Commonwealth University’s Rehabilitation Research and Training Center and the Virginia Department for Aging and Rehabilitative Services provide funding, coaching and other support services at each site in Richmond.

“It’s significant because they teach them skills that can be transferable to working anywhere,” Nancy Paul, an employment specialist at VCU RRTC, said while sitting in the Project SEARCH classroom.

On a typical day, the interns come up to the fifth floor of St. Francis for classroom time. In the classroom, chairs are gathered around a group of tables in the middle of the room. A “Be your own kind of beautiful” poster hung on the far end of the wall. Three more colorful posters displayed instructions on how to greet others, how to make a request and how to follow instructions.

The classroom is “where they learn various employment skills and social skills — and then they go out to work,” Paul said.

As they go about their internships, the students have job coaches and instructors who periodically check in with them based on their level of familiarity with the tasks and confidence that they can get done.

“What we do is we stay with them until they have the job, their routine, and they feel that they’re competent,” Paul said. “And then we begin to fade. We do periodic checks throughout their shifts. And then we try to make them go independent, and then the checks are less and less — maybe once or twice a shift.”

Seeing where the students end up after graduation is rewarding, Paul said. Of the six graduates, they had gone on to work at UPS, Home Depot and in environmental services.

For Ferguson, working in the lab is “so brilliant.”

“I see myself always working in the lab,” he said.

Working with the slides was Ferguson’s favorite part of working in the lab. While he was a student at Monacan High School, his favorite subject was math, which he’d always been good at, he said.

“There are lots of numbers at the ends of the vial slides,” he added.

Back in the lab, it was about time for Ferguson to go on his lunch break. The machines and staffers in the room continued buzzing with activity.

“The program [Project SEARCH] gives them the opportunity to see that they have the ability and the capability of doing the same job that we do,” Smith said. “I think it’s about learning — educating and learning. It’s important to society.”

Although Virginia's abortion laws have not changed, elected commonwealth attorneys in Richmond and Henrico County preemptively have pledged not to prosecute anyone who receives an abortion or provides a woman with the procedure in the wake of the U.S. Supreme Court's decision last week to overturn Roe V. Wade.

Chesterfield County police found a juvenile male who had been shot to death in the bathroom at a birthday party on Saturday night.

Nancy Paul listens as Xander Ferguson, a recent graduate of the Project SEARCH program, speaks with a reporter at St. Francis Medical Center where he works in the laboratory. Paul is an employment specialist with the program at VCU’s Rehabilitation Research and Training Center. Photo was taken on Tuesday, June 14, 2022.

Xander Ferguson graduated from the Project SEARCH program in May. He works in the lab at St. Francis Medical Center in Chesterfield County.

Xander Ferguson, a recent graduate of the Project SEARCH program, speaks with a reporter at St. Francis Medical Center where he works in the laboratory. Photo was taken on Tuesday, June 14, 2022.