People lined up for COVID tests during a drive-thru event at The Diamond last year. RPS has opted in to a new testing program. 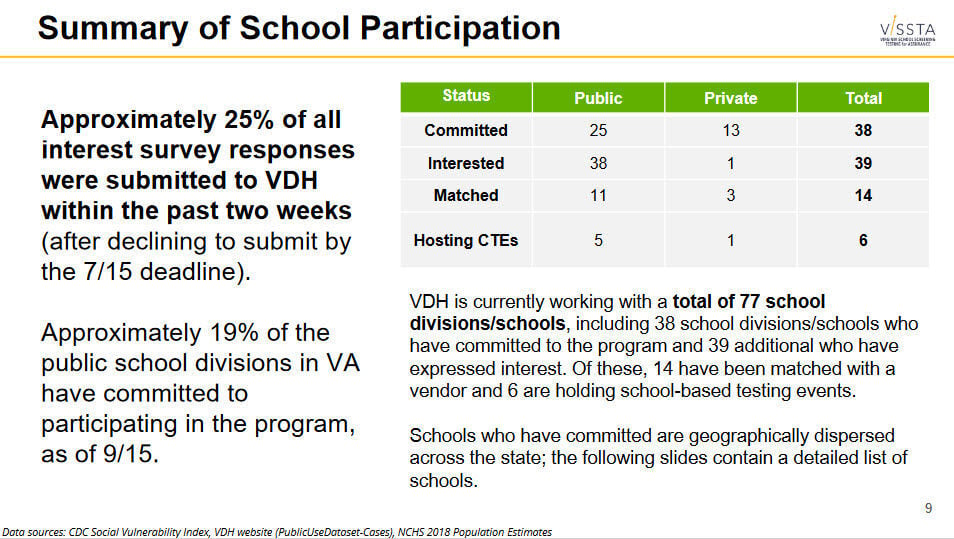 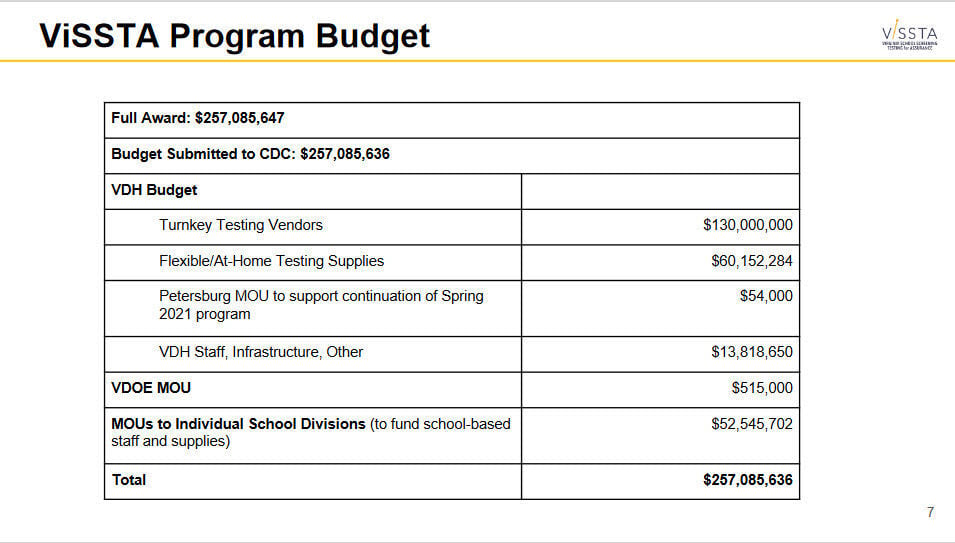 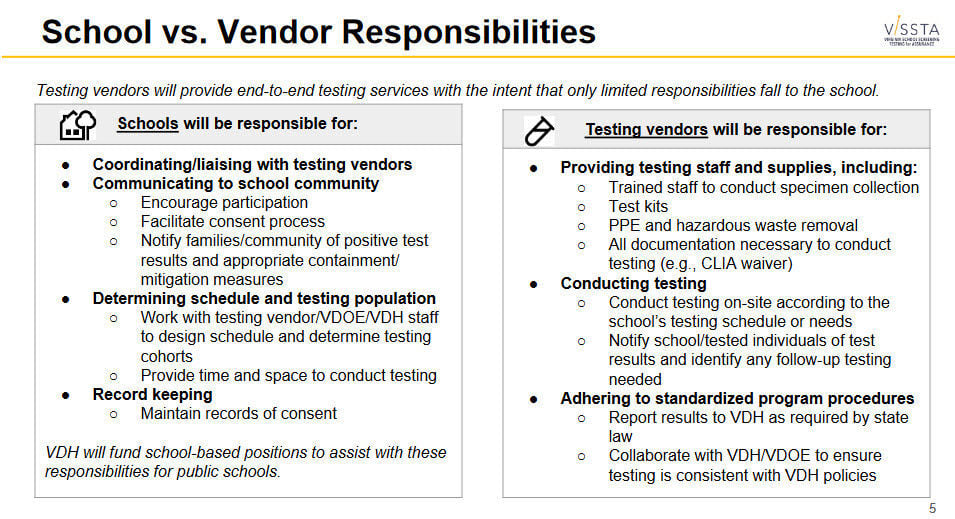 Weekly coronavirus testing among K-12 students and staff, a critical anchor in identifying the level of COVID-19 spread within schools, is being rebuffed by more than half of Virginia’s 132 public school districts.

Yet as school-age children statewide are nearly 1 in 4 of the cases caused by the hyper-transmissible delta variant, more than 80% of public school divisions in Virginia haven’t signed up.

Potential exposures have prompted temporary closures among some schools confronted with a growing number of quarantined students and staff. During the week of Sept. 12, those under 20 had the most infections reported of any age group statewide.

But only five school systems have begun hosting community testing sites since the money from the Centers for Disease Control and Prevention’s $257 million grant was announced in April.

Dr. Laurie Forlano, the VDH’s deputy commissioner for population health, acknowledged in a House Appropriations committee meeting on Monday that while extensive outreach was done throughout the summer to all public and private schools, the timing of the grant wasn’t optimal.

“It is important to remember that most schools in Virginia were opening their doors to students for the first in a year or more,” Forlano said. “Most school divisions, understandably, were focused mostly on simply operating ... on safely getting to the end of the school year.”

With the stakes now changed, interest has picked up.

About a quarter of intent forms were submitted to the health agency in the past two weeks, months after the initial July 15 deadline. It’s not enough to include the majority of public schools.

Districts that remain skeptical of the undertaking, such as Chesterfield County Public Schools, continue to cite staffing capacity — which has hemorrhaged throughout the pandemic — as a hindrance to successfully implementing routine testing.

In a School Board meeting last Tuesday, Chesterfield’s superintendent, Merv Daugherty, said the state may have the money to add positions, but “there aren’t enough people in the system to hire.”

“We cannot ask our nurses to do any more,” Daugherty said. “They’re working overtime. There’s money out there from the federal government for testing, but there aren’t people to do the testing.”

The Chesterfield school district was among the first in the state to release a public dashboard outlining the percentage of students and staff who have tested positive in the past week and how many are quarantined. While the positivity rate remains well below 1% for students and staff, figures depend on whether people get tested and tell the school system.

Forlano clarified on Monday that Virginia’s testing program doesn’t require schools to conduct the testing and that the person slated to be a coordinator between the schools and vendors doesn’t need to be a nurse.

The grant program relies heavily on testing vendors — which make up $130 million or half of the federal grant — in an effort to alleviate the existing strain on schools by having contractors handle the testing and results. Schools would be responsible for coordinating with testing vendors, communicating containment measures to families and maintaining records of consent.

Almost $53 million is to fund school-based staff and supplies and half a million is allotted for the Virginia Department of Education to support three positions to help coordinate and plan with schools.

Out of the districts in the Richmond area, Richmond Public Schools and Hopewell City are the only ones to have already opted in to the state program. Maggie L. Walker Governor’s School, Colonial Heights, Dinwiddie, Powhatan and Petersburg have expressed interest.

Chesterfield schools spokesperson Shawn Smith said in a statement Monday night that the district had expressed interest late last week, although it was not listed on the VDH’s presentation.

Henrico County Public Schools has indicated plans to join as well, according to Dr. Beth Teigen, the district’s chief of staff.

Teigen said that in recent weeks, HCPS has been learning “how a school system of our size can feasibly establish regular screening testing protocols” for unvaccinated staff and student athletes and make tests available for those who are isolating due to potential exposure or quarantined because they have COVID. Teachers and students are not required to get vaccinated for the coronavirus in Virginia outside of districts like Richmond, which has a mandate in place for faculty and staff.

“We are examining all options to determine what might be possible given a number of factors, including available staffing to assist with an endeavor such as large-scale screening tests,” Teigen said in a statement.

On Monday, Forlano noted that COVID testing is voluntary and only individuals who sign consent forms will be tested. The testing would also be for students and staff who do not have symptoms and have not had a potential exposure — two groups previously not prioritized in testing procedures.

In conversations with other districts that have already implemented similar testing strategies in K-12 schools, Forlano said the percentage of people tested was about 30%. No other states have reported a 100% uptake, but even if that were to change, Forlano said the infrastructure is in place to meet the demand.

The current plan sends enough testing kits for up to 5% of a school division’s enrollment, and any future shipments will be determined based on need. The first shipments for those who have opted in are expected this week with the full program beginning in October.

Schools can still request community testing events or submit commitment surveys to the VDH to be included in the program. More than 20 school-based testing events are scheduled through mid-October. School divisions wanting to be part of the state-funded ViSSTA program can fill out an intent form here.

People lined up for COVID tests during a drive-thru event at The Diamond last year. RPS has opted in to a new testing program.