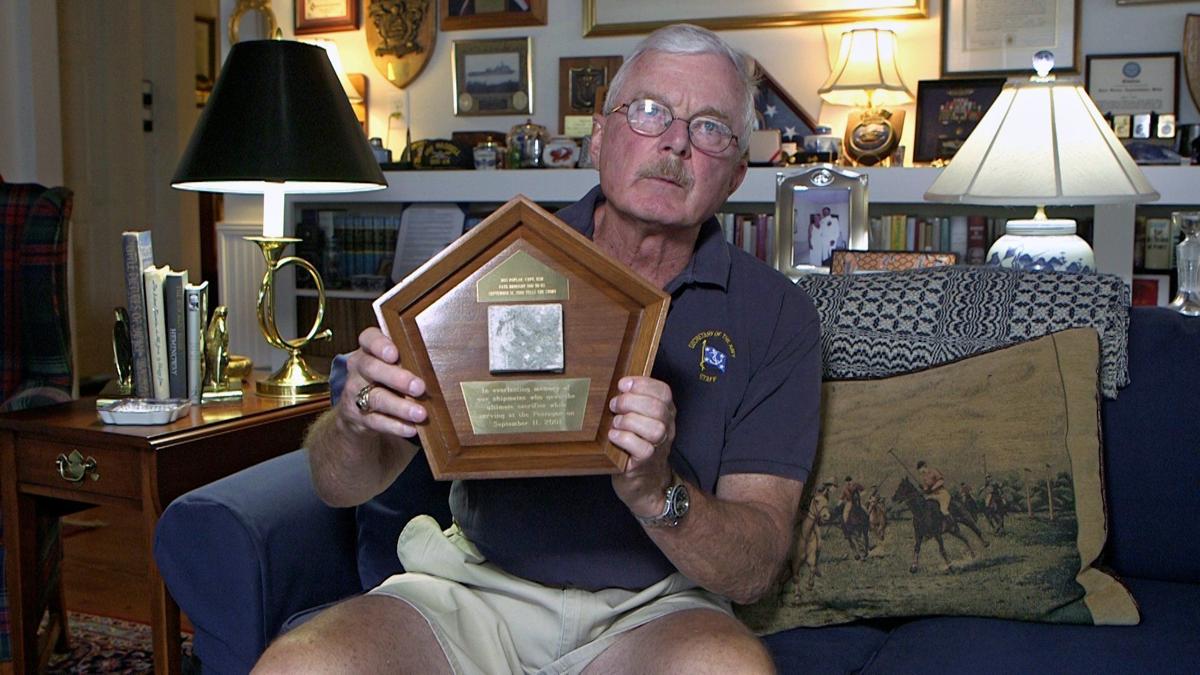 Navy Capt. James “Ros” Poplar, who was working in the Pentagon on Sept. 11, 2001, holds a plaque with a piece of the wall from his old office. It was struck by American Airlines Flight 77 as it crashed into the U.S. Department of Defense headquarters in Arlington. 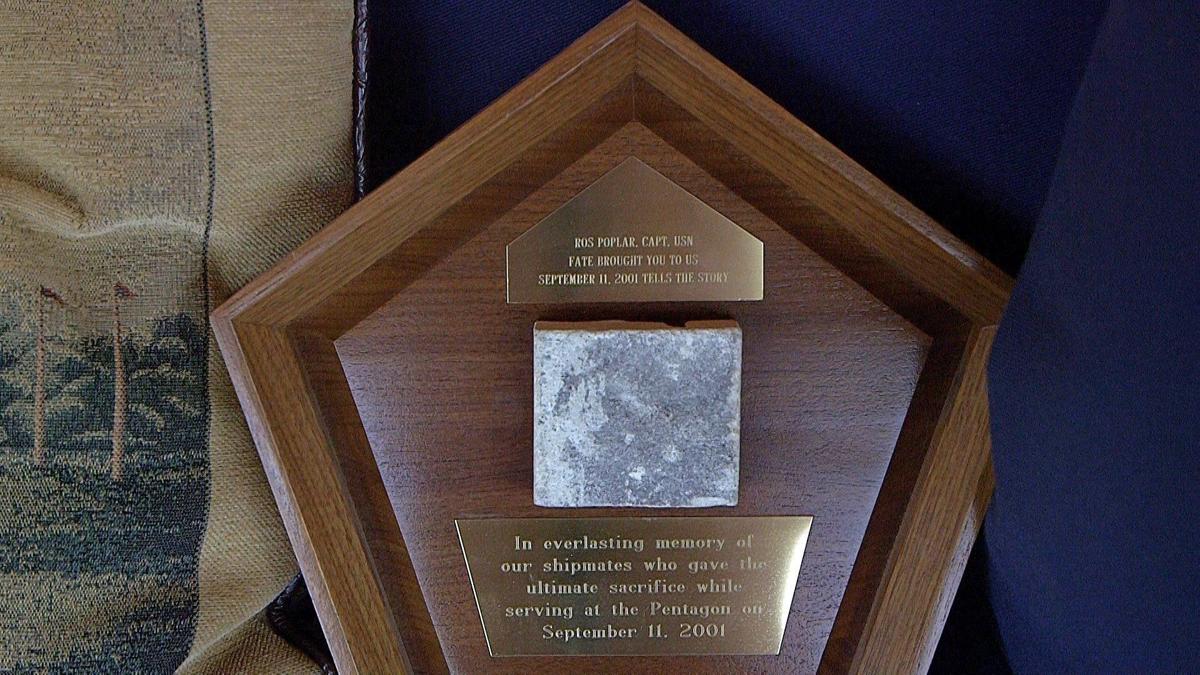 Capt. James “Ros” Poplar speaks about his experience working in the Pentagon on September 11, 2001. Here, he shows a plaque with a piece of the wall from his old office, which was the site of impact of American Airlines flight 77. 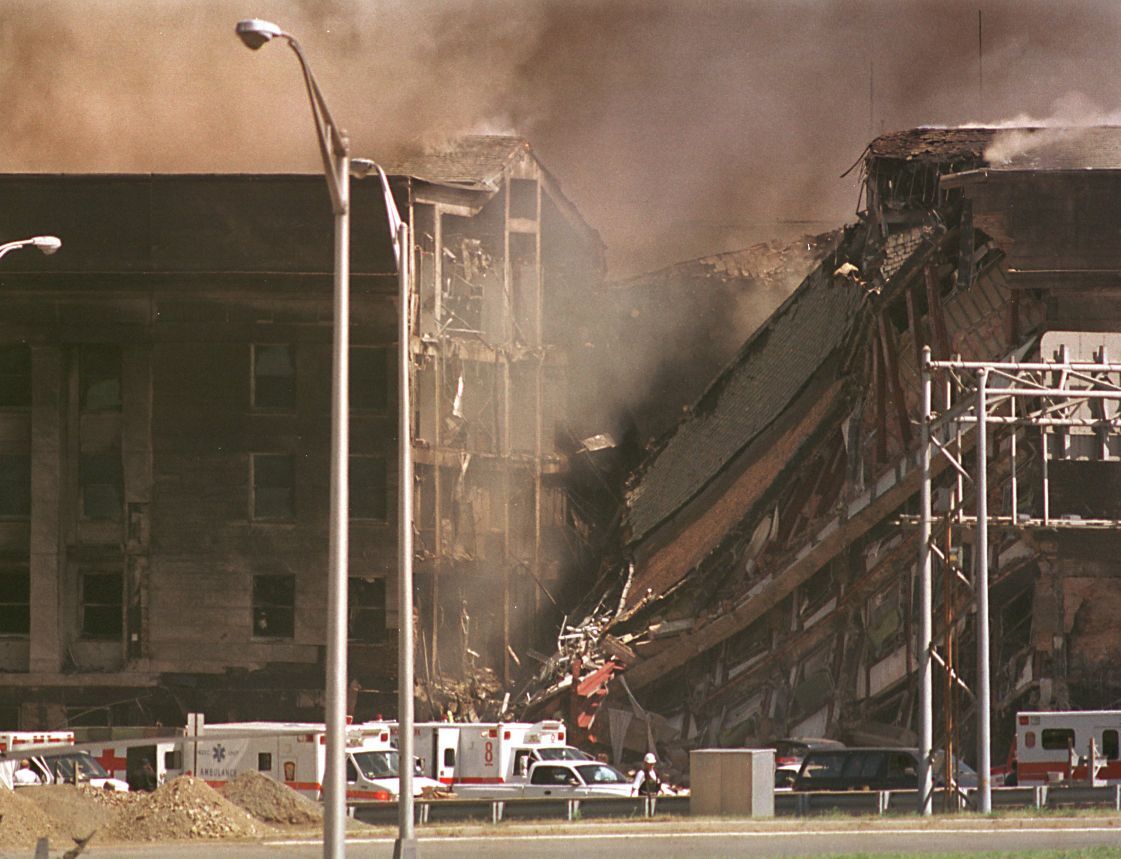 As American Airlines Flight 77 hurtled toward the Pentagon at 530 miles per hour, the Boeing 757 passed over Arlington National Cemetery and the fresh grave of Helene Poplar, whose husband, Navy Capt. James “Ros” Poplar, would have been in the plane’s path if not for his late wife’s presence in his dreams.

Poplar had reluctantly accepted a new job at the Pentagon two weeks earlier — prodded by Helene in a dream to move on with his life — that shifted him from the Navy Command Center to an office on another side of the massive building at the heart of the United States military.

Ground was broken for the Pentagon on Sept. 11, 1941, less than three months before the Japanese attack on Pearl Harbor and exactly 60 years before an attack that killed 125 people inside the building and 59 on the commercial jet that hit it.

Twenty years later, as the United States observes the anniversary of one of its darkest days, Poplar, 67, still ponders how fate spared him, but not 27 of his close colleagues in the command center who died in the attack as they watched televised coverage of coordinated attacks on the World Trade Center in New York City that killed 2,753 people.

“9/11 is a difficult day for me,” said the 30-year U.S. Navy veteran, now living in the Shenandoah Valley with his second wife, Joanne. “I’ve struggled with the memories over the years.”

“There is no doubt that if I had been in [the Navy Command Center] I would have perished with the rest of my friends and co-workers,” he said.

Surviving the attack on the Pentagon was a matter of chance and heroism, depending where the fuel-laden plane hit the fabled five-sided building, whether employees were sitting at their desk or using the bathroom, and the response of co-workers who rescued some from flames and smoke after a fireball that rose 200 feet high at the moment of impact at 9:37:45 a.m.

At that moment, Poplar was accompanying his new boss, then-Assistant Secretary of the Navy Hansford T. Johnson, in a routine meeting on the outer ring of the Pentagon just a few hundred feet from where Flight 77 plowed into a portion of the building recently renovated with reinforced steel walls and blast-resistant windows.

They didn’t feel a thing during the meeting, held in another of the five enormous wedges that comprise the Pentagon. They didn’t know that two hijacked airplanes had crashed into the twin towers in New York. A fire alarm sounded, but “as sailors, we ignored that alarm,” he said.

Then Poplar smelled smoke and the unmistakable odor of jet fuel. He excused himself from the meeting, went into the corridor and looked to his left to see flames, smoke and people fleeing. “I told my boss and the others in the meeting, ‘We need to leave the Pentagon now,’” he remembered.

They left the building on the northwest side of the Pentagon and looked up to see two F-16 fighter jets streaking overhead at supersonic speed as they sped north to intercept a fourth hijacked plane. United Airlines Flight 93 was headed for Washington before crashing in a field in Shanksville, Pa., killing all 40 passengers and crew members after a struggle between the passengers and hijackers.

Poplar noticed a streetlight pole lying on its side, but still didn’t realize what had happened — whether a truck bomb had exploded or a cruise missile hit the building — until he turned the building’s corner.

“Everybody literally was in shock to see the huge gaping hole in that side of the Pentagon,” he said.

Hani Hanjour, one of five hijackers on the flight and the presumed pilot, had flown the airplane low over the national cemetery from the southwest and hit the Pentagon’s western wall at a 42-degree angle just below the second floor of the E-Ring, one of five concentric rings in the five-story, five-sided building.

The exploding airplane cut through the inner three rings of Wedge 1 into the adjacent Wedge 2, which was largely unoccupied for impending renovations, with the tragic exception of the Defense Intelligence Agency. Wedge 1, was within days of formally completing its renovation, and about 3,800 of the normal level of 5,000 employees had returned to their offices. The Pentagon work force that day was almost 20,000 people.

“If it had hit anywhere else, the losses probably would have exceeded the [2,753] at the World Trade Center,” said Jim Schwartz, then assistant fire chief for operations at the Arlington County Fire Department and incident commander for a remarkably unified local, federal and state response to the disaster.

Schwartz arrived at 9:48 a.m., 11 minutes after the attack and one minute before FBI Special Agent Chris Combs, with whom he already had a close working relationship in preparing for potential disasters in the national capital region. It paid off that day as Arlington led the unified response to the attack and fire that engulfed parts of the building.

Within 20 minutes of the crash, signs of a potential building collapse prompted Schwartz to pull back firefighters at 9:57 a.m. The upper floors of the E-Ring collapsed at 10:15 a.m., a nearly 40-minute delay that enabled many employees to escape, according to the Defense Department history.

Soon after the collapse, word came that another plane — United Flight 93 — was headed toward Washington, so he moved the command post back beneath the Interstate 395 overpass, although firefighters remained on the job in the Pentagon.

“We’re part of something bigger than we’ve ever encountered before,” said Schwartz, now retired after a career that included service as Arlington fire chief and deputy county manager for public safety.

The Rev. Larry Tingle, a Methodist pastor who served as Arlington Police chaplain, was recovering from knee surgery the previous day at his home in Arlington when he saw the news of the Pentagon attack. He called the county emergency communications center and police officials asked if he could report for duty.

“I got my crutches and off I went,” said Tingle, who has served for 16 years as chaplain for the Chesterfield County Police Department after retiring to the Richmond area.

On his way to the Pentagon, he said a customary prayer, “God give me what I need to be present.”

That day, Tingle said he repeated the prayer “more than once” as he offered emotional support to police, firefighters and emergency dispatchers.

At the stricken building, military and civilian employees needed prayers to escape what had become three rings of hell.

The newly reinforced walls and blast resistant windows in the renovated Wedge 1 “held up under extraordinary pressures,” the DOD report said, but the improvements “diminished venting of the fires, heat, and smoke” and sent the fireball coursing through the building.

“The furious energy of the explosion made the bottom two floors in the immediate vicinity of the crash site death traps, compromised stairwells as escape routes, and made firefighting more difficult,” the report stated.

The U.S. Army took the brunt of the attack, with 75 employees — civilian and military — killed, most of them in the Resource Services-Washington administrative offices at the point of impact in the outer ring.

Among them was David Laychak, 40, who had moved back to the Washington area from Fort Huachuca in Arizona eight months earlier to work in the budget division in an office directly across the hall from one where his father had served.

The program, budget and management accounting division lost 34 of its 40 employees there that day.

“You don’t think about something like that until after it happens,” said Laychak’s brother, Jim, who serves as executive director of the 9/11 Pentagon Memorial Fund.

The memorial fund is raising money to match federal funds to build a visitors education center next to the national cemetery to teach young people about what happened that day.

“We’ve got a whole generation growing up that has no memory of 9/11,” Laychak said.

The memory is vivid and painful for Poplar, whose study in his Shenandoah County home features tributes to the colleagues he lost, and a charred, 3-inch square from the wall of the office he had vacated for his new job two weeks before the attack. The Navy Command Center, covering more than one-third of an acre within the Pentagon, lost 42 military and civilian employees in the attack.

One of those colleagues stands out in memory — Capt. Jack Punches, a retired Navy aviator who had returned as a senior civilian employee for the Navy at the Pentagon nine months before the attack.

Poplar remembers Punches as “one of those great, happy-go-lucky fellows who would do anything for you.”

Punches died at his desk, while a pair of Navy officers rescued his chief, Jerry Henson, and two Navy petty officers who were trapped in the office as fire spread through the building.

“For me, it was just incomprehensible that people like Jack Punches could be there talking with you, laughing with you and drinking a cup of coffee one minute, and then in a split second he and 26 of his office mates are gone in a flash,” Poplar said.

Three years ago — 17 years after the attack — Poplar sought counseling and medication for what was diagnosed as post-traumatic stress disorder.

9/11 Memories: A collection of remembrances from Richmonders and Virginians

It’s been two decades, and we haven’t forgotten. For the 20th anniversary of 9/11, the Richmond Times-Dispatch presents this collection of sto…

9/11 Memories: A collection of remembrances from Richmonders and Virginians

Navy Capt. James “Ros” Poplar, who was working in the Pentagon on Sept. 11, 2001, holds a plaque with a piece of the wall from his old office. It was struck by American Airlines Flight 77 as it crashed into the U.S. Department of Defense headquarters in Arlington.

Capt. James “Ros” Poplar speaks about his experience working in the Pentagon on September 11, 2001. Here, he shows a plaque with a piece of the wall from his old office, which was the site of impact of American Airlines flight 77.