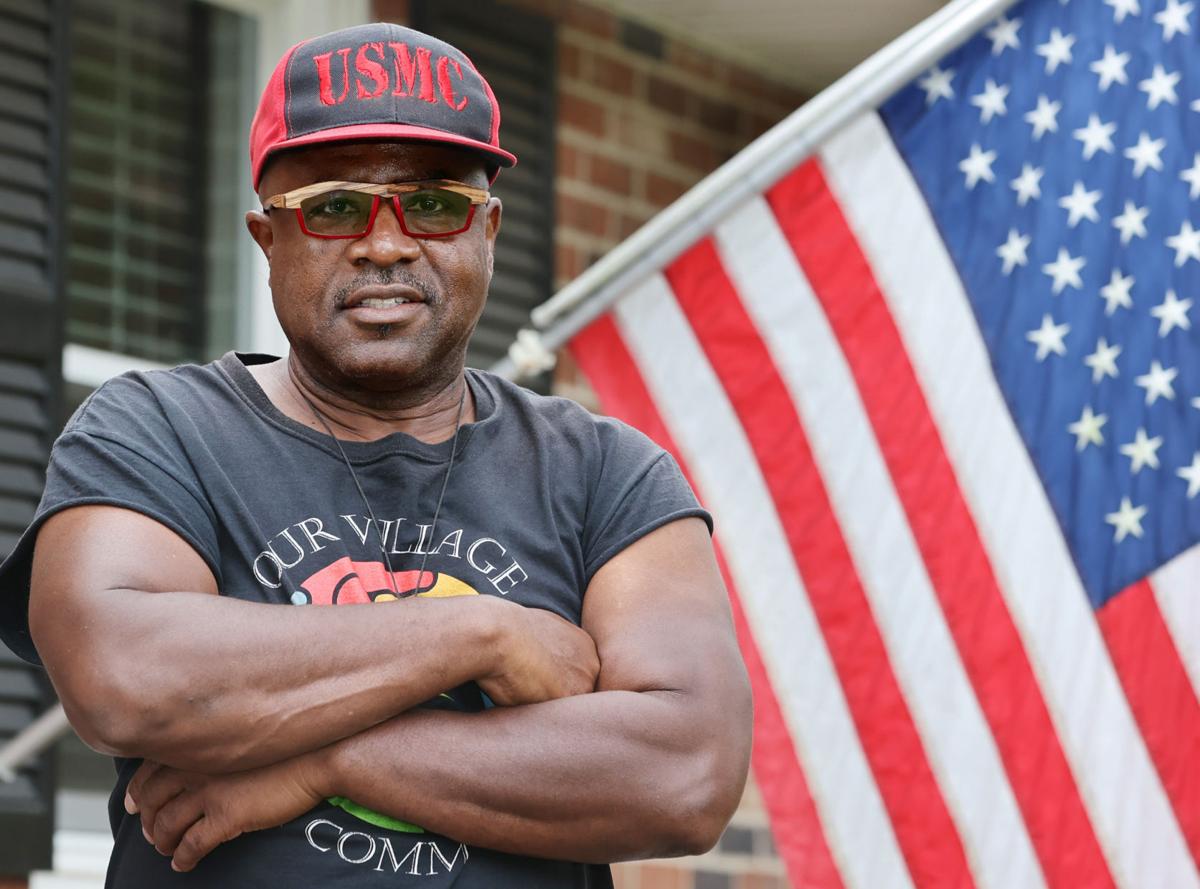 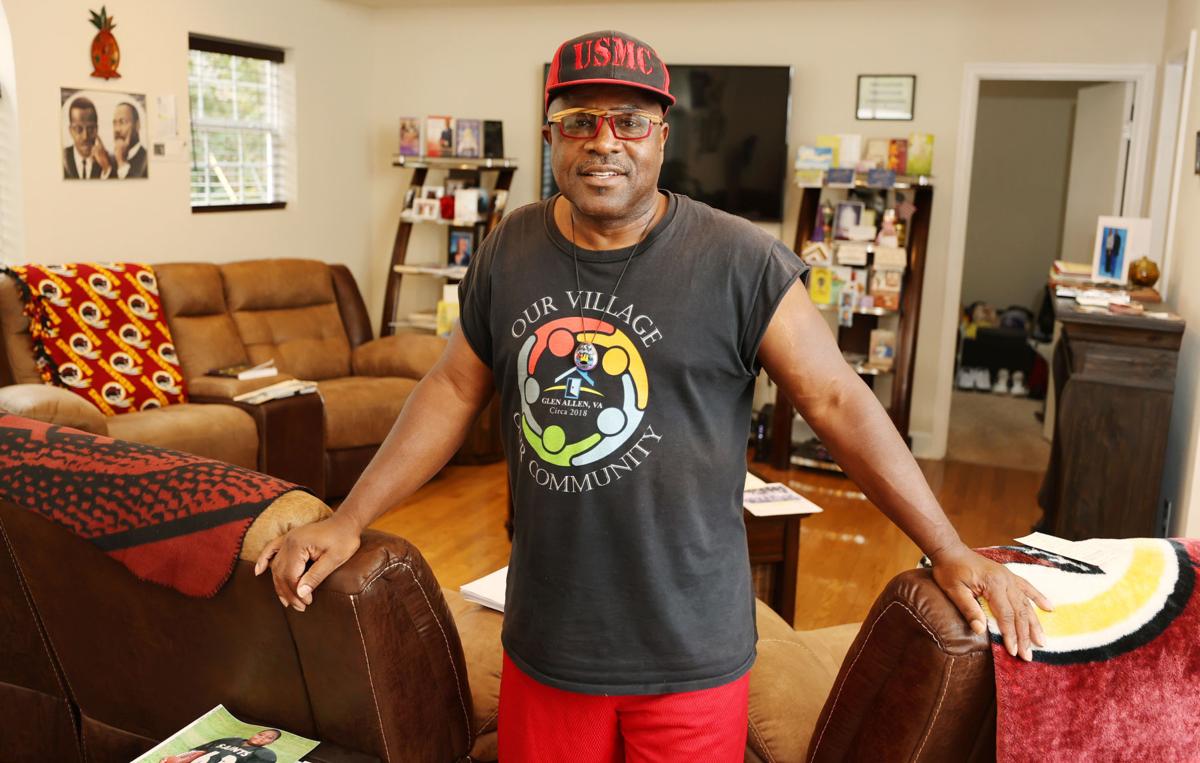 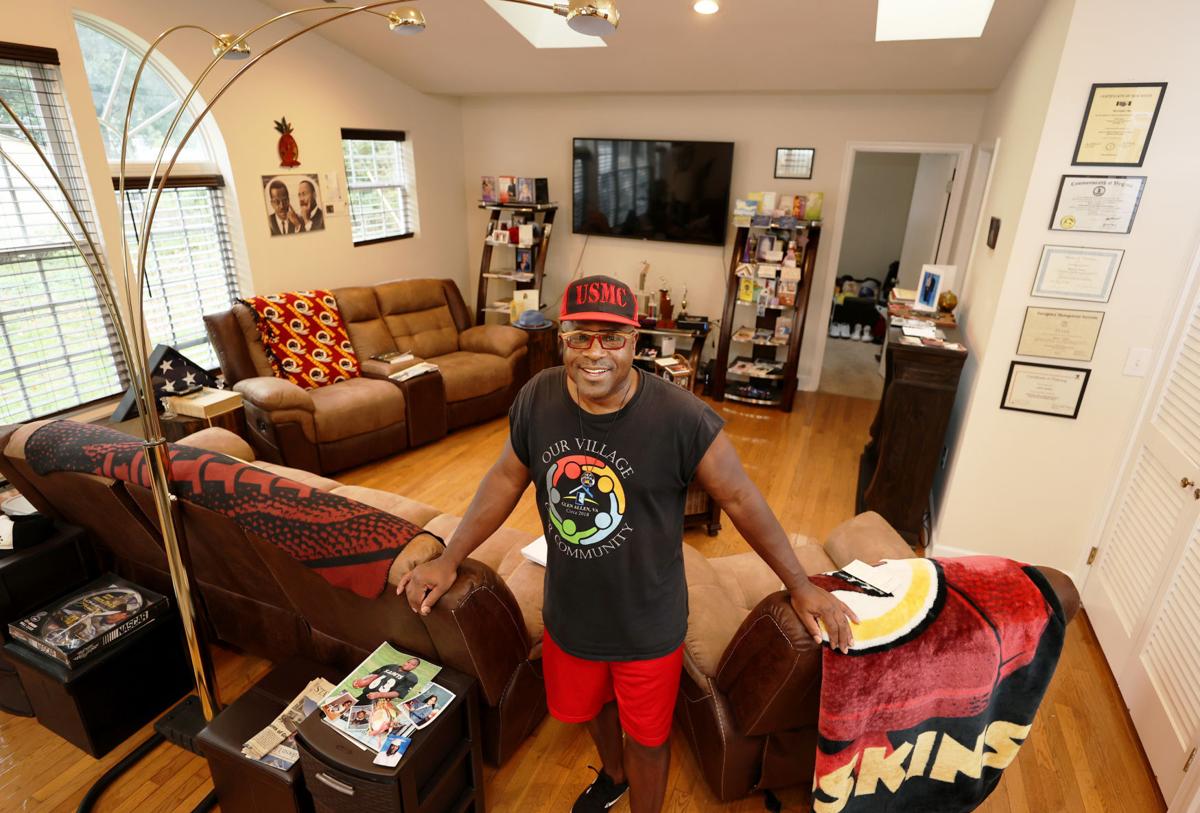 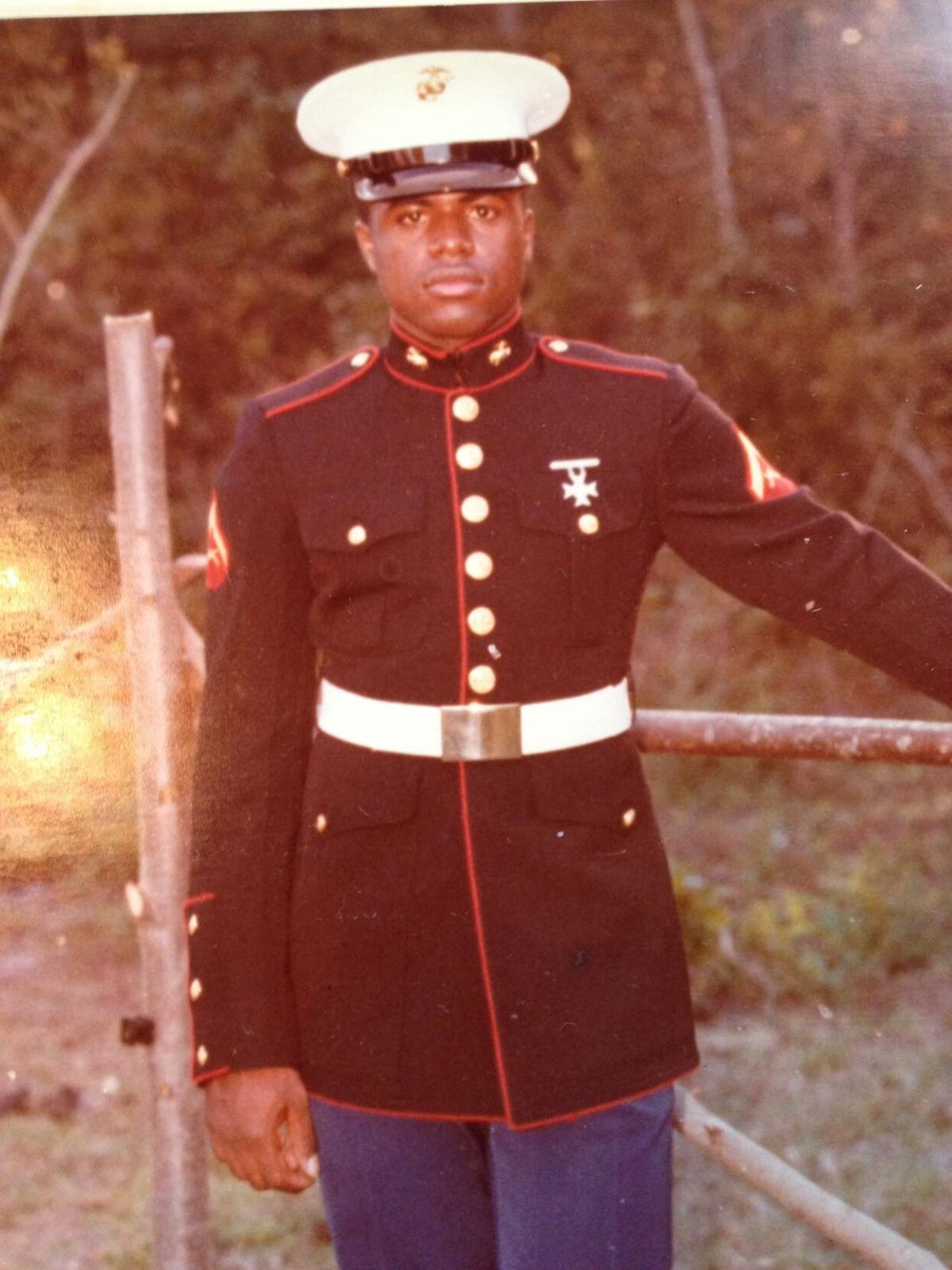 Mosby went to Hermitage High School. He served four years in the Marines and 20 with the National Guard. 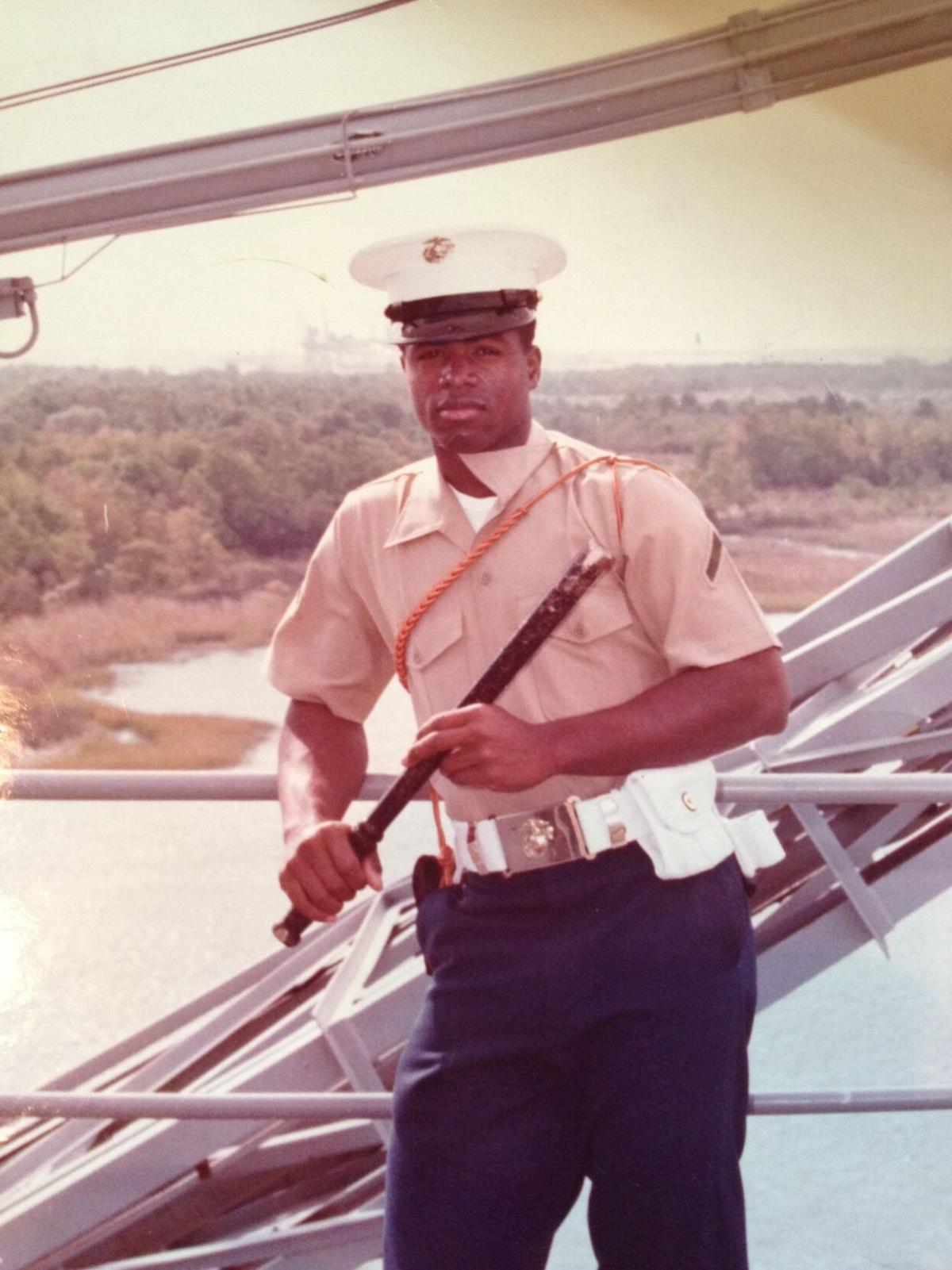 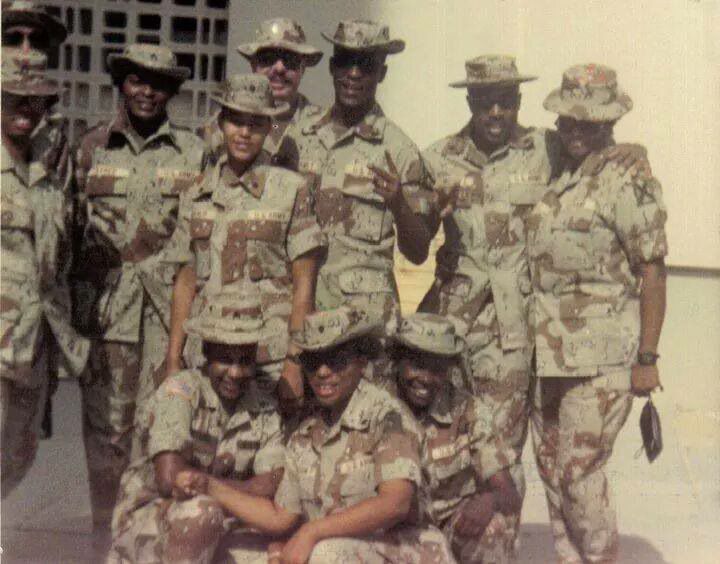 Mosby (second from right) is seen during a deployment to Saudi Arabia in 1991 during Desert Storm. 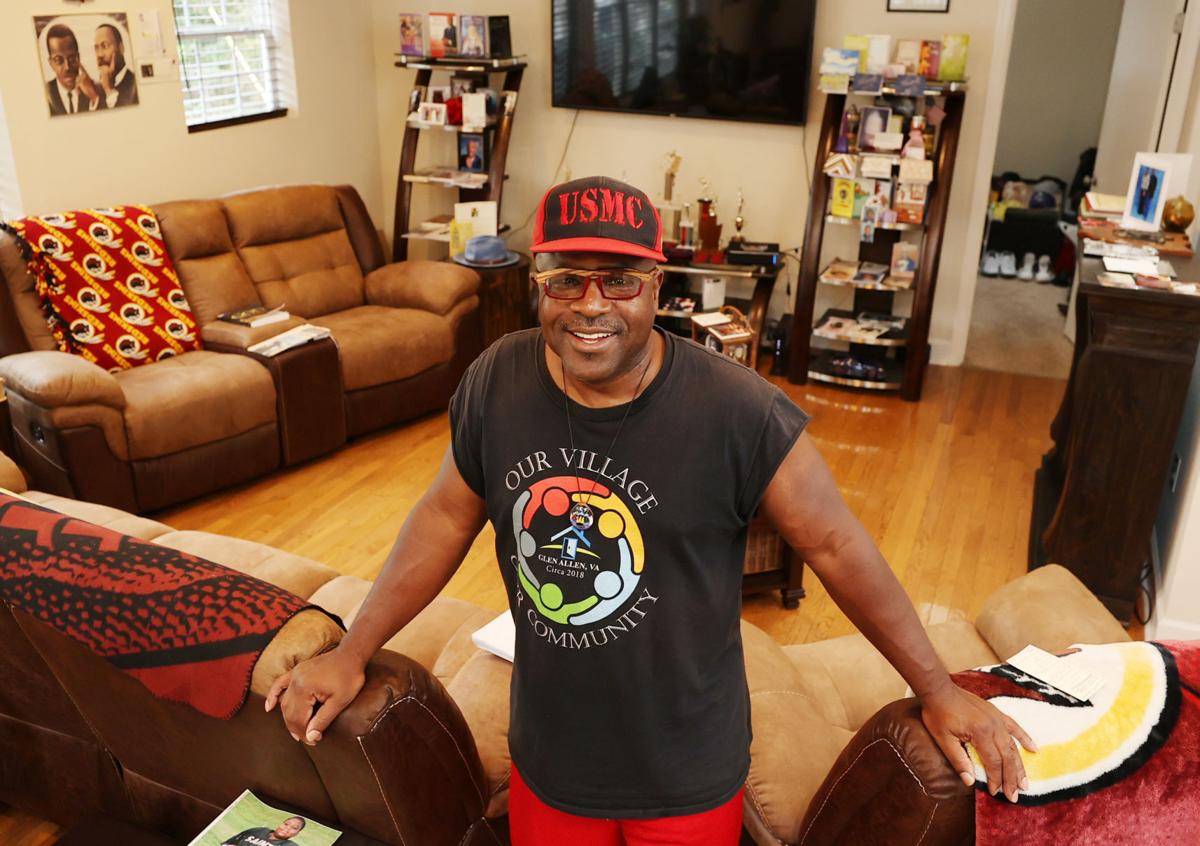 As a Marine, Erwin Mosby went on winter NATO maneuvers in the mountains of Norway, hauling a belt-fed machine gun and full pack through the snow until his field parka was soaked with sweat.

As a Virginia National Guardsman at a camp in the Saudi Arabian desert, Mosby organized Iraqi prisoners for incarceration during the first Gulf War, working through the heat of the day and the chill of the night.

“I loved the military because I got away and it teaches you life,” said Mosby, a 61-year-old Henrico County native who grew up in Randolph Ridge, a suburb in the county’s northwestern corner that still has a hint of country about it. “If you don’t go to school, you go to the military.”

That was pretty much Mosby’s path, having graduated from Hermitage High School, where he played football and basketball and was a hurdler on the track team.

Four years in the Marine Corps and 20 years with the National Guard — adventure, notwithstanding — was not without its trials for Mosby, the most demanding of which would not manifest itself until 2009: post-traumatic stress disorder, triggered, he said, by the accidental death during the Gulf War of a fellow trooper from his Virginia unit, the suicides later of two others and troubling memories of combat’s aftermath.

Mosby, diagnosed with PTSD by Veterans Affairs doctors, twice hospitalized for a total of nearly four months, and declared 100% disabled, volunteered for The Times-Dispatch Veterans Day project because, he said, talking publicly about the trauma with which he wrestles daily, through tears and gasps, is therapeutic: “It’s something that I wanted to talk about it. It’s been a struggle.”

But one, Mosby said, that is not without its promising moments, despite two failed marriages and recovery from alcoholism. Mosby said with a laugh, “I’m 61 going on 28. I hurt every day. And if it goes away, it’s time for me to go.”

The military also was another window on something that Mosby faced at home in Virginia: racial tension.

He recalled a white officer from his first Marine assignment who said he “wasn’t used to working with Black people” and a Black enlisted man from rural Arkansas who said he “wasn’t comfortable with whites.” Such friction played out in disciplinary proceedings, Mosby said.

Mosby, among the first Black students to attend Hermitage, described himself as someone who “doesn’t see color.” But his experience has shown him that others do: “Black people have to work at what they do.”

The son of an alcoholic postal worker who had side jobs as a chef and bartender — and who had been an Army medic — Mosby joined the Marine Corps in December 1977, mustering out as a corporal in November 1981.

After basic training at Parris Island, S.C., he became a shipboard Marine, assigned as a security guard on the USS Simon Lake, a tender based in Charleston, S.C., that supplied equipment, including weapons, to nuclear submarines. That duty lasted 2½ years.

Mosby then transferred to the 2nd Marine Division at Camp Lejeune, N.C., up the Atlantic coast from his initial posting.

An infantry unit — “the real Marines,” said Mosby — the division spent several months training abroad, preparing with European NATO allies for possible winter warfare against the Soviet Union, which in the early 1980s was still considered very much a threat to the West.

That training mission overseas — it included stops in Scotland and Norway — was Mosby’s last major assignment in the Marines. He returned to Camp Lejeune to complete his four-year hitch and resisted overtures in 1981 to re-enlist.

Suddenly, Mosby was again a civilian and was back in Richmond, working for a commercial printer. But the tug of the armed services endured.

In February 1982, Mosby joined the Virginia National Guard and was assigned to an administrative unit, the 183rd Personnel Services Detachment, posted to the now-shuttered armory on Richmond’s Dove Street.

It was, as National Guard duty is, a part-time gig in which so-called weekend warriors occasionally trained at Fort A.P. Hill, in the countryside north of Richmond, and at Fort Pickett, in the rural Southside.

The mundane gave way to mobilization when Iraq invaded Kuwait in 1990 and Mosby’s unit — mostly Black and heavily female — was sent to the Gulf to handle prisoners of war. Among his colleagues was Pfc. Pam Gay, a 19-year-old from Surry County — “my little buddy,” said Mosby — who was fatally injured when the 2½-ton truck in which she was traveling was clipped by a passing tank in the middle of the night.

Mosby and Gay had spoken the day of the accident — a day that had been memorable for her in another way. “She was baptized the morning she was killed,” said Mosby, choking back tears. He was seared by Gay’s death — Mosby keeps among his mementos a newspaper account of the fatal collision — but would not realize how deeply until 2009.

Life stateside after Desert Storm was tumultuous. Mosby’s marriage, which had produced a son, now 33, would disintegrate. He had difficulties on the job and was briefly suspended for cursing out a manager. Mosby found another position with a Richmond manufacturer, but that didn’t work out. He was jobless for two years and would later be homeless.

Mosby went to a job fair at Fort Lee, near Petersburg, and sat in on a presentation on the trauma faced by men and women sent to war zones: “I found myself in this room, crying. There were 200 or something people there. A nurse saw that I was in distress and said I should get help.”

Mosby consulted with Veterans Affairs doctors, spent three months at a hospital in Hampton and a month at one in Richmond and began psychotherapy. Last October, he said, he was declared fully disabled with PTSD.

Though life’s tests continued — he lost his home and fell in with some sketch people — Mosby has a new house in eastern Henrico where the walls are adorned with photos from his years in the military. His Baptist faith has been strengthened, in part, by a missionary trip to Niger this year.

Adele - Easy On Me (Official Video)

Dan Roberts got negative reviews when he volunteered to serve in Vietnam. His commanding officer called him an idiot, and his father-in-law an…

From serving in Vietnam to officiating in the NFL, Leslie Speight reminisces on what he's accomplished

It was 3:30 a.m. on April 4, 1968, and Leslie Speight was sound asleep in his bunker in Vietnam. A fellow soldier was smoking a cigarette, whi…

Mosby went to Hermitage High School. He served four years in the Marines and 20 with the National Guard.

Mosby (second from right) is seen during a deployment to Saudi Arabia in 1991 during Desert Storm.