Gov. Ralph Northam plans to remove a time capsule placed under the Robert E. Lee statue on Monument Avenue in 1887 and replace it with a new one, he announced Tuesday, as the state begins to form its plans for the future of the much-contested monument.

The capsule was placed in the northeast cornerstone of the 40-foot-tall granite pedestal on Oct. 27, 1887, and contains about 60 objects largely related to the Confederacy, including a picture of Abraham Lincoln lying in his coffin, according a story in the archives of The Richmond Dispatch — a predecessor to the Richmond Times-Dispatch.

To mark the occasion, the city held a massive celebration attended by 25,000 Confederate veterans and supporters from across the South that filled local hotels. The Richmond Dispatch called it a “brilliant street parade” and reported that hotels were full across the city and armed guards would be stationed near the site of the monument’s pedestal.

One of the speakers was Col. Charles Marshall, who blamed the Civil War on Lincoln and told the crowd that Lincoln’s only motive for freeing the slaves was to win the war. Three years later, in 1890, the 21-foot-tall Lee statue was unveiled and another celebration was held.

Lee, the first of five monuments to Confederate military figures along Monument Avenue in the Fan District, is the only one that remains standing after a summer of protests against racial injustice.

Northam ordered the statue’s removal more than a year ago, but its future remains in limbo as two lawsuits work their way through the state’s courts. The Supreme Court of Virginia heard arguments earlier this month and is expected to issue a ruling this summer.

“It’s time to say to the world, this is today’s Virginia, not yesterday’s,” Northam said in a statement. “And one day, when future generations look back at this moment, they will be able to learn about the inclusive, welcoming Commonwealth that we are building together. I encourage Virginians to be part of this unique effort to tell our shared story.”

Staff members from Historic Jamestowne scanned the pedestal on March 22 and identified a void where they believe the capsule is located. That result matches research that historian Dale Brumfield outlined in a 2017 Richmond Magazine article about the capsule and its contents.

A copper box measuring 14 by 14 by 8 inches was created to serve as the time capsule by Capt. J.E. Phillips, one of the engineers excavating the property, according to Brumfield’s research. Thirty-seven Richmond residents, organizations and businesses contributed artifacts.

• A history of Monumental Church donated by George Fisher;

• A collection of Confederate buttons from Cyrus Bossieux;

• A copy of Carlton McCarthy's "Detailed Minutiae of Soldier Life in the Army of Northern Virginia" given by J.W. Randolph & English publishers;

• A guide to Richmond with a map of the city and a map of Virginia;

• Three bullets, a piece of shell and a Minie ball lodged in a piece of wood from a Fredericksburg battle field, given by Frank Brown;

• A bible from Thomas J. Starke;

• Statistics of the city of Richmond from J.B. Halyburton;

• A battle flag and a square and compass made from a tree over Stonewall Jackson's grave from J.W. Talley;

The picture of Lincoln in his coffin was donated by a Hanover County principal named Pattie Leake, and it’s unclear why it was included. Brumfield has a theory: Because the picture depicts a deceased Lincoln, he sees its placement under the Lee statue as a middle finger toward the former president.

“A dead president in the bottom of a Confederate general’s memorial,” Brumfield said. “That speaks volumes to me.”

It is believed that only one photo of Lincoln was taken after his death, by Jeremiah Gurney in New York in 1865. If the artifact under the Lee statue is an original photo, it could be worth $250,000, Brumfield estimated.

But it could also be a fake — some were circulated after Lincoln’s death — or an illustration.

One major question is the condition of the photo and the other artifacts. If the capsule’s lid came open at any point in the past 134 years, moisture would have crept into the box and destroyed many of its contents. There are no details explaining the picture’s type. If it is made of paper, it may be destroyed regardless. If it is a glass plate negative, it might be in good shape, Brumfield said.

Because the capsule is located on the flat outermost edge of the base, it can be removed without threatening the integrity of the monument. The state is committed to following best practices for historic preservation, said Matthew J. Strickler, secretary of natural and historic resources.

The contents of the old capsule will be taken to the Department of Historic Resources’ conservation lab, where staff members will examine them, the governor’s office said.

The General Assembly this year awarded $1 million to create a plan to reimagine Monument Avenue. The Virginia Museum of Fine Arts and the city of Richmond will lead the planning effort, and a concept is due Sept. 1, 2022. The state said it won’t remove the pedestal until after the VMFA has completed its project.

Though Northam announced plans to remove the capsule and replace it with a new one, it’s unclear if the pedestal will remain in the long term. The state intends to remove the statue as soon as it is allowed if it prevails in court but leave the base, which last summer was covered in graffiti with messages against police and racism.

Some local residents believe the base of the statue is worth keeping because of the role the monument played in 2020, when it was the hub for racial injustice protests following the murder of George Floyd by police in Minneapolis.

“The Lee pedestal has really taken new meaning and new significance,” Brumfield said. “It probably should be left there without the statue on top.”

Lee’s statue isn’t the only one with a time capsule beneath it, Brumfield said. The bases for the statues of Stonewall Jackson, Jefferson Davis and Matthew Fontaine Maury have them, too.

The June 4, 1915, edition of the Richmond Times-Dispatch reported that “interesting relics” were placed in the base of Jackson’s statue, which was located at the intersection of Monument Avenue and Arthur Ashe Boulevard. When the cornerstone was set, an article in The Times-Dispatch called the addition of Jackson “a fourth heroic figure to the three that now look down upon Richmond’s tree-lined avenue of fame.”

Richmond officials have introduced plans to remove the other four pedestals, which stand on city property and whose statues were removed in 2020. But the state has asked Richmond to pump the brakes. Local residents have suggested repurposing them into new works of art.

The city has not independently confirmed the existence of time capsules in the other pedestals, a spokesman for the mayor said. If they are located, the city would pause its work and ask the Virginia Department of Historic Resources to investigate.

“This project is an opportunity to replace relics of the Lost Cause with items that represent the Commonwealth’s strength in diversity and unite us around the progress we are making together,” she said.

The state will consider submissions for the new time capsule until July 20. Residents of Virginia who wish to submit an item must contact the governor’s office, detailing its size and material and explaining how it represents Virginia.

What's in the time capsule?

A time capsule was placed in the pedestal of the Robert E. Lee monument in 1887 when it was built. According to newspaper archives, a rare picture of President Abraham Lincoln lying in his coffin was put in the time capsule. Here are some of other items donated for the time capsule, which Gov. Ralph Northam plans to remove:

• a battle flag and a square and compass made from a tree over Stonewall Jackson's grave from J.W. Talley;

• a history of Monumental Church donated by George Fisher;

• a collection of Confederate buttons from Cyrus Bossieux;

• a copy of Carlton McCarthy's "Detailed Minutiae of Soldier Life in the Army of Northern Virginia" given by J.W. Randolph & English publishers;

• a guide to Richmond with a map of the city and a map of Virginia;

• three bullets, a piece of shell and a Minie ball lodged in a piece of wood from a Fredericksburg battle field, given by Frank Brown;

• a bible from Thomas J. Starke;

• statistics of the city of Richmond from J.B. Halyburton;

An heir of persons who donated the land for Richmond’s Robert E. Lee statue and five nearby property owners told the Virginia Supreme Court on…

​'We get to tell a different story:' Virginia unveils what will replace the 1887 time capsule inside Lee monument

The Robert E. Lee statue on Monument Avenue is coming down Wednesday morning. The day before the planned removal, Virginia officials unveiled the 39 artifacts chosen to capture the modern era.

UPDATED: 'It’s not the void they hoped it would be': 1890 time capsule under Lee statue could not be found

After 12 hours of work Thursday, and after 19 granite blocks weighing up to 8,000 pounds were removed from the pedestal, no one could locate the time capsule that is believed to exist there. 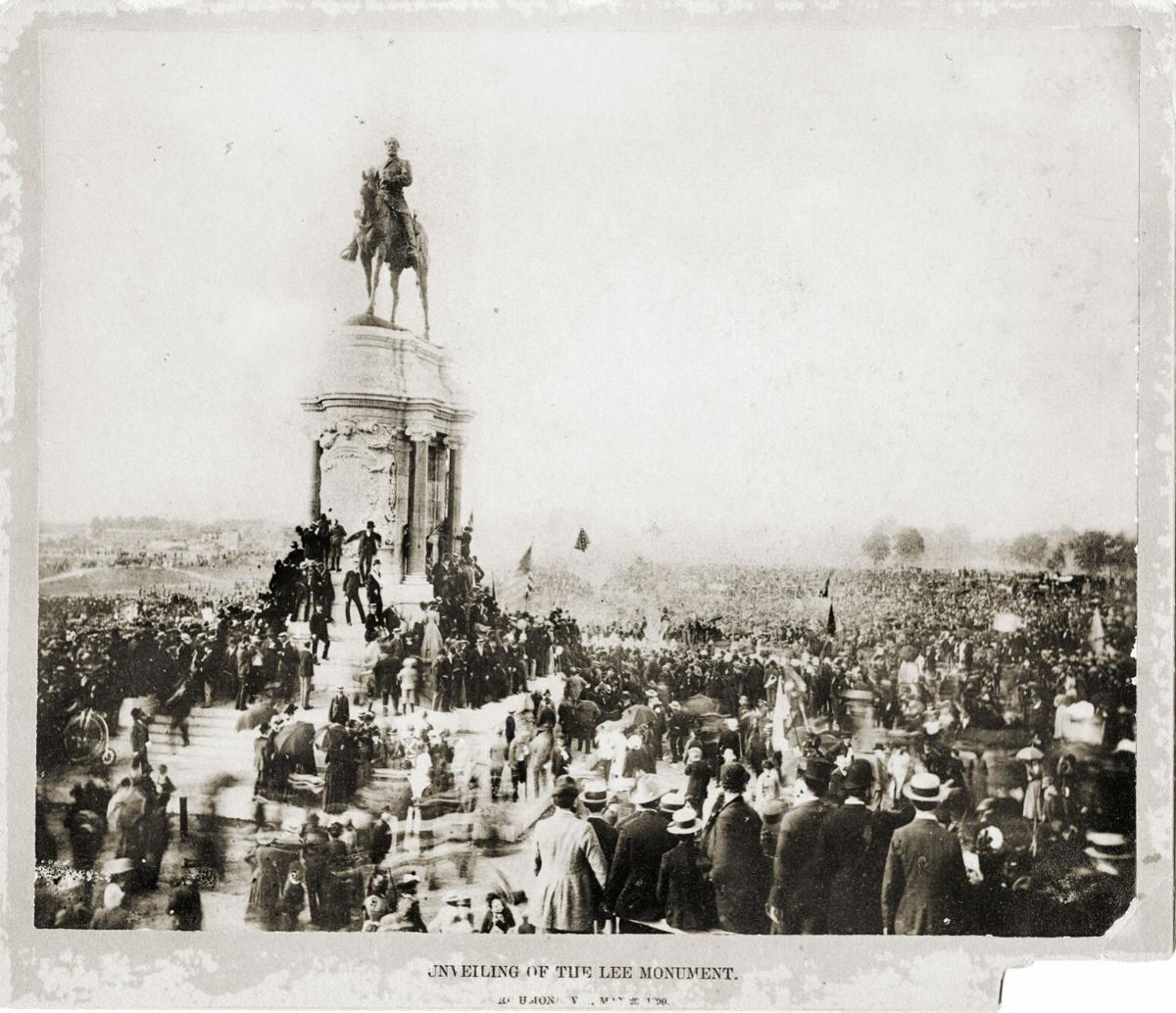 The Lee statue was unveiled in 1890, three years after the capsule was placed in a pedestal cornerstone. 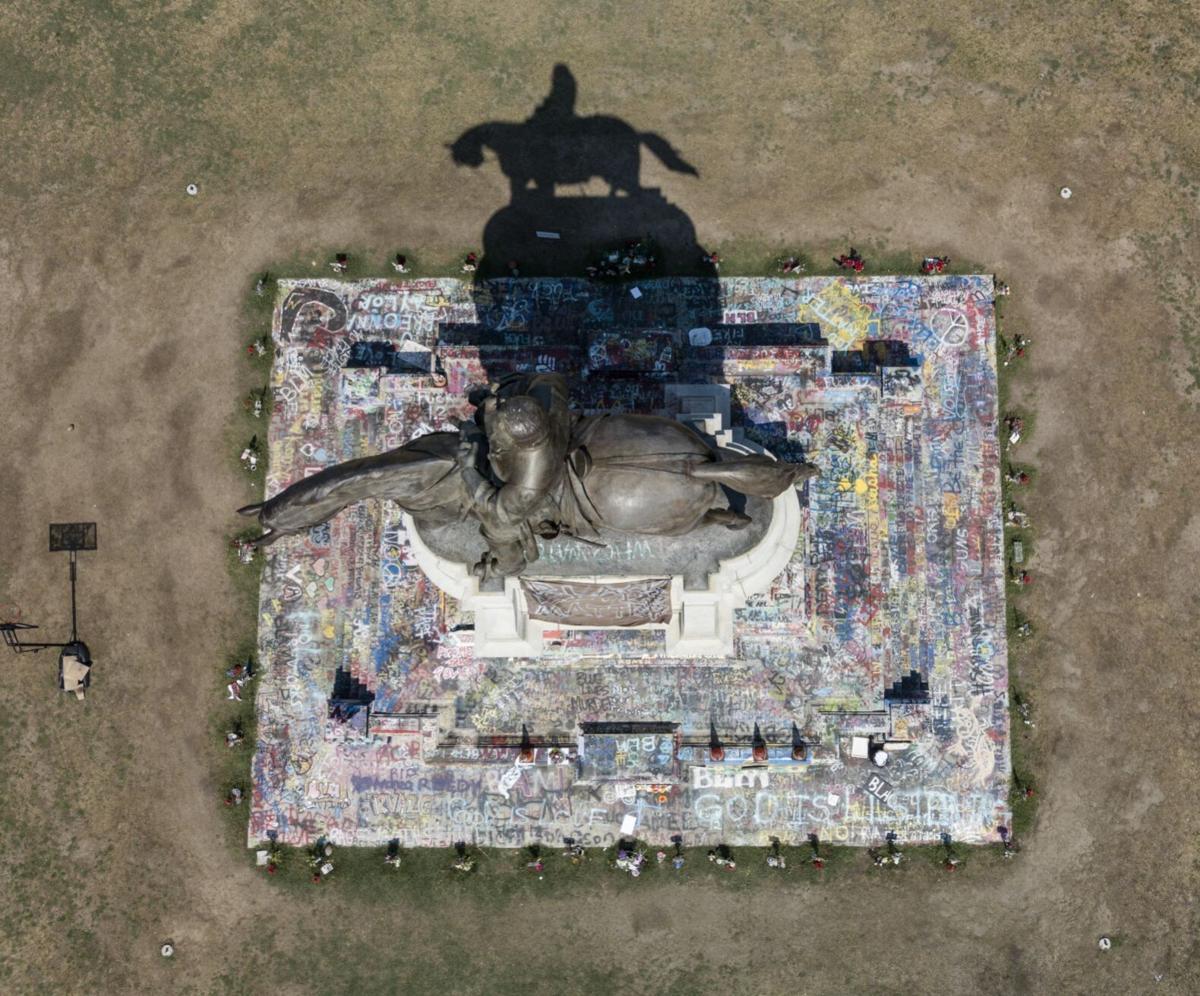 The fate of the Lee statue is currently before the Supreme Court of Virginia. Some say its pedestal should remain to mark the site’s role during last year’s protests against racial injustice.