Richmond’s Robert E. Lee statue, which was erected on Monument Avenue in 1890 and has become the focal point for local protests against racial injustice, will continue standing until at least October.

Gov. Ralph Northam has pledged to take down the monument, calling it a racist symbol. But nearby residents filed a lawsuit to keep it in its place, and a judge ruled Tuesday that the suit will proceed to trial Oct. 19.

Virginia Attorney General Mark Herring, who filed a motion to dismiss the suit, will continue to aid the governor in removing the 11-ton bronze statue that sits on state-owned land, said Herring spokeswoman Charlotte Gomer.

“Attorney General Herring remains committed to ensuring this divisive and antiquated relic of a bygone era is removed as quickly as possible,” Gomer said.

Northam’s order to remove the Lee monument came June 4. The other Confederate statues along Monument Avenue stood on city-owned land and were quickly dismantled at Mayor Levar Stoney’s direction, but the Lee statue has defied a quick resolution.

Carl Tobias, a law professor at the University of Richmond, said Marchant apparently wants more facts and evidence before making a final judgment.

“The process grinds slowly sometimes,” Tobias said. “I think the judge is being careful and trying to treat everyone fairly and resolve the dispute.”

They argue that an 1887 deed that conveyed the circle to the Monument Avenue Association included in it a covenant that required the recipient to “have and to hold the said property or ‘Circle,’ to the following uses and purposes and none other, to wit, as a site for the Monument to General Robert E. Lee, which it is the end and object of the Monument Association to erect.”

The plaintiffs said taking down the statue would cause an emotional loss and that if the area loses its National Historic Landmark designation, property values would be reduced.

But the state argued that even though the General Assembly accepted the property in 1890, that action didn’t impose a legal obligation for the governor to keep the statue in place. It also argued that Virginia law does not allow restrictive covenants to be enforced that are contrary to public policy.

“Any requirement that the Commonwealth maintain in perpetuity a massive monument to anyone would be void as ‘against public policy,’” Virginia’s solicitor general, Toby Heytens, wrote in a brief filed earlier with the court.

The contractual decisions made in 1890 cannot bind Virginians 130 years later or beyond, Heytens argued. When the monument was erected, Lee was seen as a heroic figure whose failed cause should be mourned, the solicitor general wrote, but now Lee and other Confederate leaders are regarded as symbols of racism, injustice and oppression and their cause a blight on our nation’s history.

“The statue has become an ever-more-painful wound and a focus of the anger and frustration felt by many who continue to suffer the effects of the disgraceful institution the Confederacy fought to protect,” Heytens wrote.

On Tuesday, Marchant dismissed the lawsuit’s Count 5, which claimed that taking down the statue violated Virginia Code. Even if Northam is violating state law by taking down the statue, the judge said, in this instance the state code does not give citizens the power to enforce the law by filing a suit.

“The statute provides under what conditions a work of art may be accepted, removed, relocated or altered by the Commonwealth and under what conditions a structure intended primarily for ornamental or memorial purposes may be procured, removed, remodeled or added to by the Commonwealth,” Marchant said. “It is completely silent as to authorizing any public action.”

Tobias, the UR professor, said that no matter what ruling Marchant eventually issues, it seems likely that the losing side will appeal, potentially sending the matter to the Virginia Supreme Court and possibly delaying a final decision until 2021.

“I think everybody knows this is headed there,” Tobias said.

Less than a week after dropping a similar lawsuit, five Richmond residents who live in the Monument Avenue Historic District are suing Virgini…

The Robert E. Lee statue on Monument Avenue will continue to stand on the famous street after a Richmond judge declined Thursday to issue an i…

Richmond Circuit Court Judge W. Reilly Marchant said Tuesday he expects to rule within a week on a request from the Virginia attorney general’…

The Richmond Circuit Court judge who has blocked Gov. Ralph Northam’s plan to take down the Robert E. Lee statue on Monument Avenue is no long… 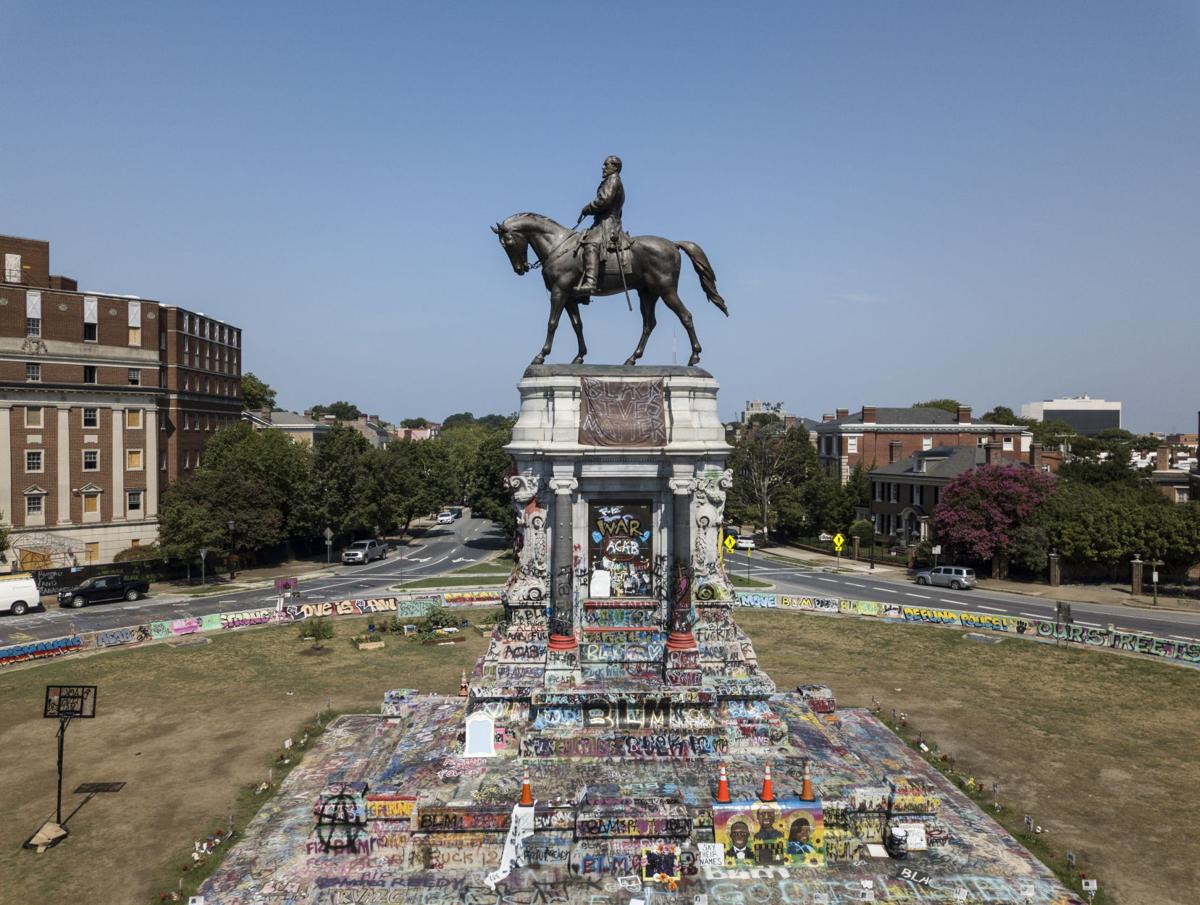 Aerial photo of the Robert E. Lee statue on Monument Avenue in Richmond on Tuesday, July 11, 2020. 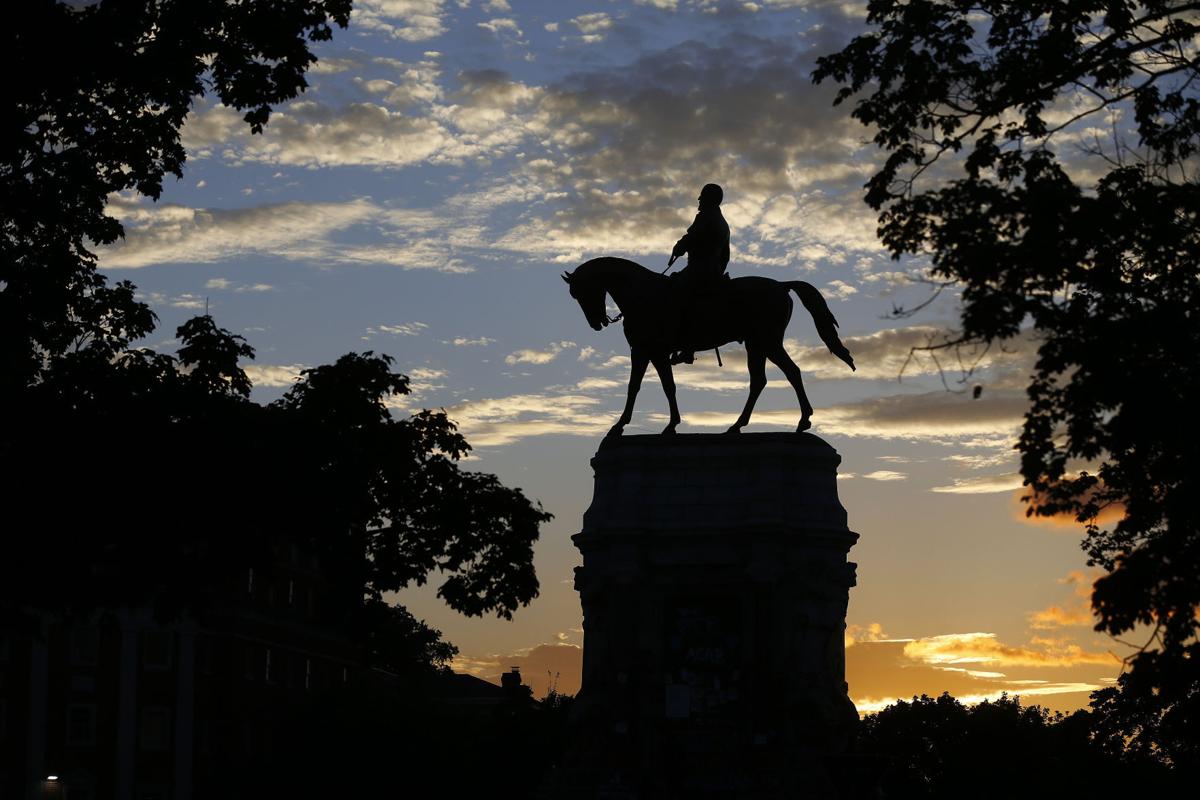 The Robert E. Lee statute on Monument Avenue after sunset in early August.