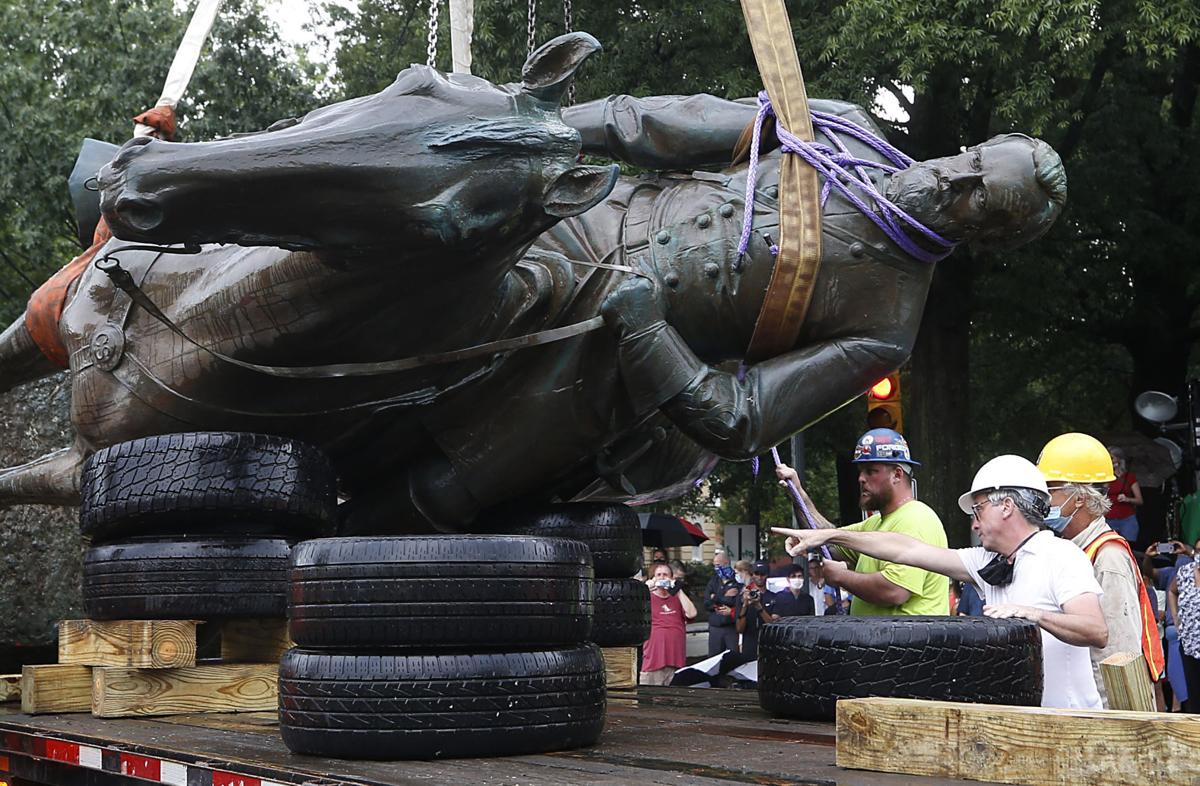 Work crews removed the Stonewall Jackson statue from from Monument Avenue in Richmond on July 1. 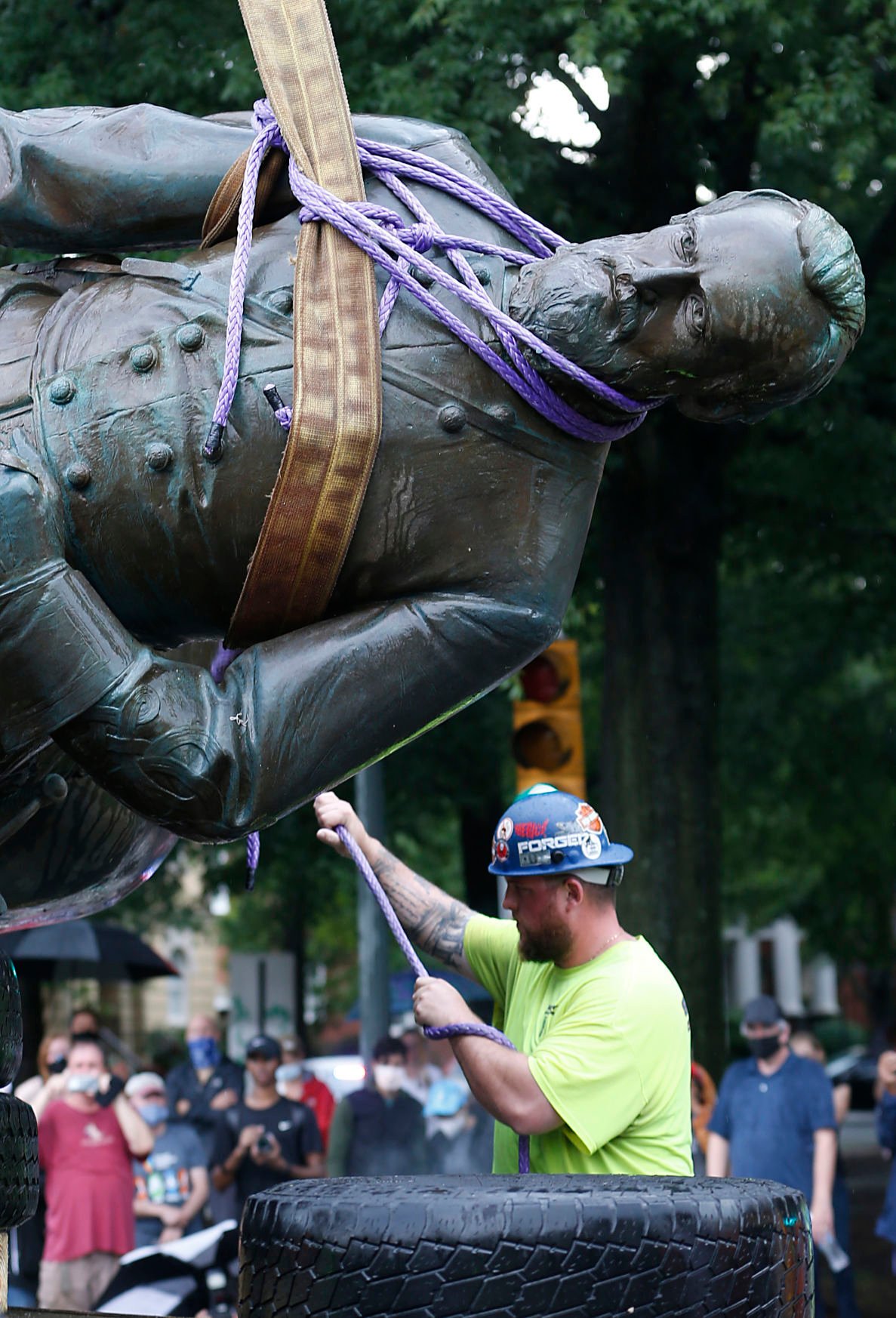 A worker guided the Stonewall Jackson statue to a truck after it was removed from Arthur Ashe Boulevard on July 1. 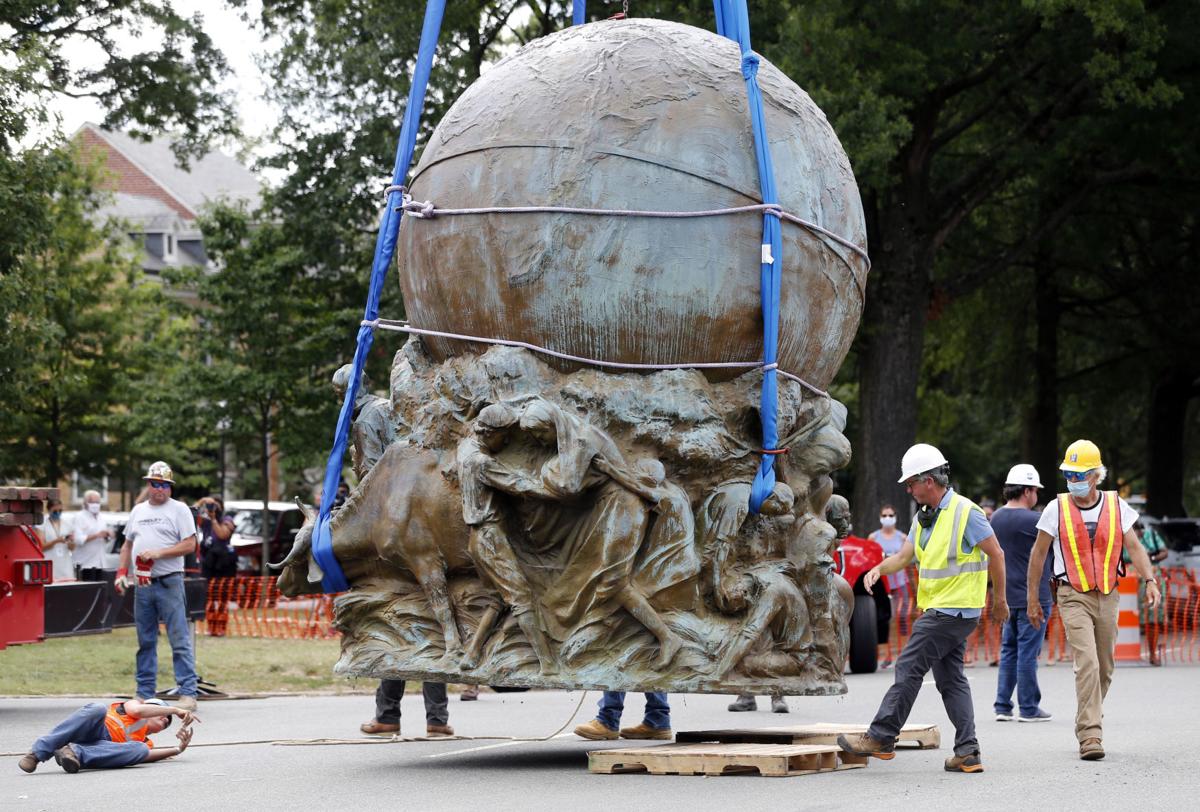 Already pulled from their pedestals and put in temporary storage at a sewage plant, Richmond’s Confederate statues are now officially up for grabs.

The Richmond City Council on Monday voted unanimously to permanently remove the statues already being held in storage, the result of Mayor Levar Stoney’s decision last month to take them down as protests gripped the city.

The council decision begins an offering period during which museums, historical societies, localities and other groups can submit proposals for the statues, including those of Thomas “Stonewall” Jackson and J.E.B. Stuart.

As soon as early September, the council can finalize a relocation plan for each statue with an additional vote.

“We really need to figure out what we can do with these statues,” said Chris Hilbert, the council’s vice president and 3rd District representative. “I think they should be sold at auction and placed on private property.”

The council’s staff will field and review offers for the statues and present a list of recommendations to the council next month to decide upon, said Lawrence Anderson, the council’s chief of staff.

Protesters called the statues symbols of systemic racism and white supremacy. They defaced the most prominent ones along Monument Avenue with graffiti and called on city leaders to take them down.

In a matter of days, daily demonstrations compelled what years of debate and discussion had not: political consensus among city leaders that the statues should come down.

In early June, Stoney said he and Councilman Michael Jones of the 9th District would introduce an ordinance on July 1 when a new state law granted the city control of its monuments.

Soon after, all nine members of the City Council pledged to support that course. It was a dramatic turnaround for a body that had twice voted against even requesting control of its statues from the state.

As the protests continued, demonstrators began tearing down statues themselves — most notably, the one depicting Confederate President Jefferson Davis that stood on Monument Avenue .

The scene played out in other cities, including Portsmouth, where a man was seriously injured when a falling Confederate statue struck him in the head. Locally, the incident led some on the council to call for the immediate removal of the statues for public safety, ahead of the state law taking effect.

Richmond’s interim city attorney, Haskell Brown, advised against pursuing removal outside of the state process. Bucking that advice, Stoney on July 1 ordered crews to begin taking the statues down immediately, citing “emergency powers” he said he had and the threat to public safety he said the statues presented.

Over the course of a week, contractors removed statues across the city at a cost of $1.8 million. They hauled them to the city’s wastewater treatment plant in South Richmond to be stored until the council determines their fate.

Stoney’s decision drew a lawsuit in early July from an anonymous Virginian, who challenged his authority to remove the statues outside of the state-mandated process.

Richmond Circuit Judge Bradley Cavedo issued a temporary injunction in the case. By then, only one city-controlled statue remained on display, that of Confederate Lt. Gen. A.P. Hill in North Side.

Cavedo ordered the injunction after aiming a tongue-lashing at Stoney for his handling of the protests. Cavedo, a resident of the Monument Avenue Historic District, has since recused himself from the case. The lawsuit is still pending. Stoney appealed Cavedo’s original order to the Supreme Court of Virginia.

The state-owned Robert E. Lee monument still towers over Monument Avenue, though Gov. Ralph Northam has promised to remove it. A judge on Monday issued a 90-day injunction while a lawsuit seeking to block the removal is litigated.

Though unanimous, Monday’s vote did not occur without some tension. Councilwoman Reva Trammell, the 8th District representative, criticized Stoney for taking the statues down without first securing the council’s approval.

“I’m going to vote yes, but I don’t think that we should,” Trammell said.

The council’s next meeting is scheduled for Aug. 10.

Work crews removed the Stonewall Jackson statue from from Monument Avenue in Richmond on July 1.

A worker guided the Stonewall Jackson statue to a truck after it was removed from Arthur Ashe Boulevard on July 1.