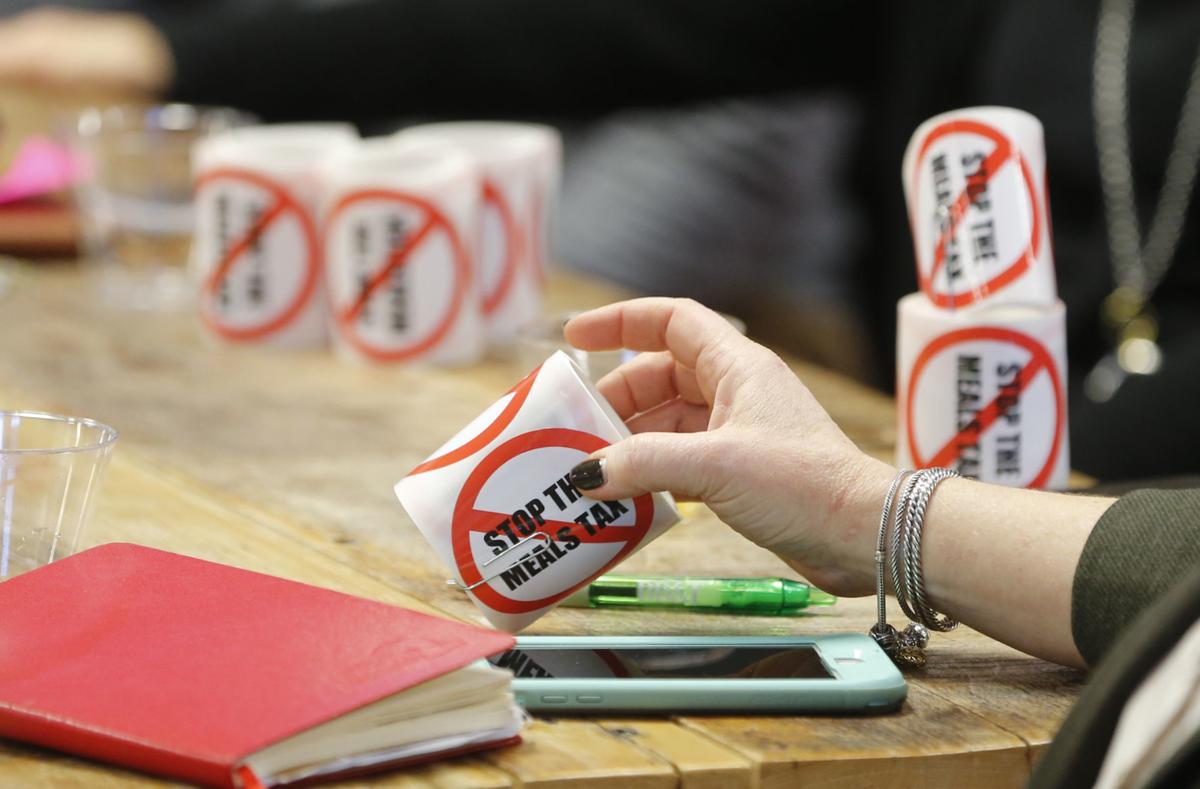 Stickers that said “Stop the meals tax” were distributed at a meeting of restaurant owners and trade groups. 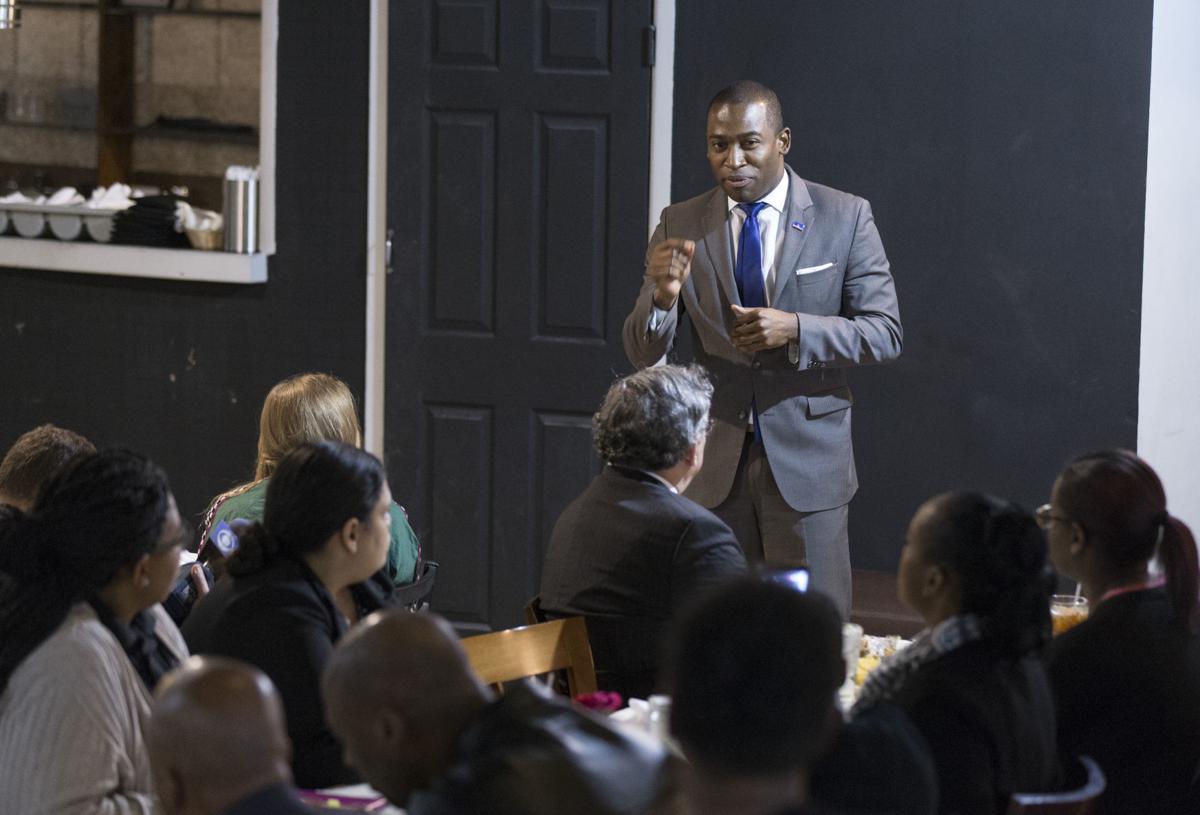 Restaurant owners immediately voiced their opposition to a proposal they say unfairly targets them. Others, though, came out supporting the proposal, saying the city can’t wait to improve decrepit school facilities.

It’s been two weeks since the mayor made his initial proposal, and the debate since then has been robust and lively. Elected officials have met and argued over both the proposed tax increase for school construction and repairs and the merits of the five-year plan passed by the School Board.

“We have a lot of work to do,” Stoney said at the start of Monday’s Education Compact meeting between the mayor, City Council and School Board.

As the proposal is considered, here are answers to common questions about the meals tax, school facilities and the politics of it all.

What is the meals tax plan?

Stoney’s proposal calls for the meals tax to increase from 6 percent to 7.5 percent, a 25 percent increase. The current combined sales and city meals tax rate is 11.3 percent. If the mayor’s proposal passes, it would increase to 12.8 percent.

The higher meals tax would generate $9.1 million in new revenue, allowing the city to borrow $150 million to fund improvements to school facilities over the next five years. Without the tax, the city has $66 million in debt capacity through fiscal year 2023.

In fiscal year 2017, Richmond brought in $35.6 million in meals tax revenue. Given the city’s growing restaurant scene, the $9.1 million projection is a tick above a quarter of last year’s revenue.

Are there other options besides a meals tax increase?

There are options, but each has its own downside, the administration says.

Stoney and the city’s financial advisers say an increase to the meals tax is the only viable way to create the additional $150 million in debt capacity. About 1 in 3 patrons at city eateries comes from outside a 50-mile radius of Richmond, according to figures touted by the mayor, meaning Richmond residents wouldn’t solely pick up the tab for the increase. A property tax increase, for example, would all be collected from city home owners.

Others, including one member of the City Council, want a cigarette tax implemented.

Parker Agelasto, who represents the city’s 5th District on the council, said Monday night that he plans to reintroduce a cigarette tax, a measure he introduced last year that gained support from just one colleague.

Stoney, citing a report from Richmond’s financial advisers, has said a cigarette tax wouldn’t generate enough revenue and is a declining source given the decreasing number of smokers each year.

Henrico County residents have to vote to approve a meals tax. Why don’t Richmond’s?

Virginia counties can levy meals tax rates of up to 4 percent, but they must be approved by voters through a referendum. Cities and towns, however, aren’t subject to the 4 percent cap and can levy the taxes through ordinance rather than referendum.

Chesterfield — whose voters rejected it — and Hanover counties do not have a meals tax. In 2014, Henrico instituted a 4 percent meals tax. More than 100 localities have a meals tax higher than 4 percent, according to a University of Virginia study released last year. Covington, a small city in the western part of the state, has the highest at 8 percent. If Stoney’s proposal passes, Richmond would join Hampton and Newport News at 7.5 percent.

Why do people support the proposal?

Supporters of Stoney’s proposal say school infrastructure has been neglected for too long. The mayor has held multiple events since the idea’s initial introduction to say the city can’t delay action.

“The future is now. No more delaying. No more waiting. No more punting,” he said at an event Tuesday.

“I believe the time is now because the longer we wait, the cost will increase, our buildings will continue to age and our children will continue not to have the opportunity to learn in a state-of-the-art facility,” said School Board Chair Dawn Page at Monday’s Education Compact meeting.

Why do people oppose the proposal?

The main objection to the proposal is from restaurant owners who feel they’ve been unfairly targeted.

Owners have organized and said the increase would mean more diners eating out in one of the counties around Richmond with little or no meals tax. They’ve also raised concern that restaurant owners will have to pay higher credit card fees when it comes to collecting a higher meals tax.

“We know that there is a problem with the schools, we know they need to be fixed, and we know restaurants should not be the one bearing the full cost of that burden,” said Frank Brunetto, the president of the Richmond branch of the Virginia Restaurant, Lodging and Travel Association, at a meeting Tuesday.

What happened with the mayor’s appointee who called for a boycott?

Cindy Menz-Erb, a former interim School Board member who was eventually appointed by Stoney to the Education Compact, sent an email calling for a boycott of restaurants whose owners didn’t support the mayor’s proposal.

Stoney endorsed Menz-Erb in her failed 3rd District election campaign last fall. The mayor quickly distanced himself from the email and the boycott, saying he doesn’t support “penalizing anyone, or any business, for their beliefs.”

Less than 24 hours after Menz-Erb sent the email, she withdrew her nomination for the Education Compact.

Are Richmond’s schools really in as bad of shape as I hear they are?

Yes. Schools across the division continue to face severe issues, from heating problems to overcrowding. Broad Rock Elementary School, for example, is overcrowded to the point where school officials have placed more than 20 modular classrooms and a modular lunchroom on the South Side campus.

The issues, from heating and cooling to rodents, of George Mason Elementary School in the East End have been well-chronicled, but the problems stretch beyond just one school or one district.

Is this a new problem?

No. Richmond schools have suffered from years of deferred maintenance — a nicer way of saying neglect — and plans to improve them divisionwide have stalled, mostly because of the city’s debt capacity and its inability to afford the plans.

What has the School Board done to fix it?

The board in December passed a five-year, $224.8 million facilities plan. The plan is made up of what the board considers the division’s most pressing facilities needs.

Some council members — and some School Board members — have criticized the plan, specifically arguing for more consolidation and further analysis of the schools being built. Council member Kim Gray of the 2nd District, for example, has raised questions about the School Board’s plan of building a 1,000-student elementary school on the South Side, but not consolidating two East End elementary schools that are both slated to be rebuilt.

“I believe that the facilities plan that the board passed last year is imperfect,” School Board 1st District representative Liz Doerr wrote. “I believe that school consolidations need to be on the table and that we need to use every tool in our toolbox to stretch each dollar including historic tax credits and energy performance contracting.”

Doerr still supports the mayor’s proposal, saying, “If we wait until the process is perfect, we’ll miss out on another generation of students — the time to act is now.”

How much does it cost to build a new school?

The new George Wythe High School would cost $85 million, according to the School Board’s plan. That’s the biggest school that would be built.

A new elementary school like George Mason is estimated to cost $25 million.

Where does the schools referendum that voters passed on the November ballot fit into all of this?

You might recall the ballot measure 85 percent of Richmond voters approved in November that said the mayor must present a fully funded facilities plan without raising taxes.

The measure is currently being taken up in the General Assembly, but this proposed tax increase is not affected by the outcome of the assembly’s action because the bills wouldn’t become law until July 1 — months after the meals tax proposal is expected to be voted on.

Who has the power to actually raise the meals tax?

Ultimately it must be approved by the City Council. Council members are currently split on the idea.

What will happen if the proposal passes?

The School Board will have to go back to the drawing board and account for the $74.8 million gap between the mayor’s proposal and the plan it passed in December. Stoney has said the Education Compact would still vet the adjustments.

What will happen if the proposal fails?

City officials will have to find another way to fund school improvements.

Stoney said Thursday he hopes the council will vote on the proposal at its Feb. 12 meeting. It’s on the agenda for Monday night’s council organizational development meeting.

The mayor has also enlisted the help of Capital Results LLC, a government affairs and public relations company that has donated to Stoney’s political action committee, to push the proposal.

Williams: Welcome to Richmond, Mr. Superintendent, where drama is always on the menu

It was a day when promise, change and educational equity were supposed to be the featured items on the menu.

The Richmond School Board on Wednesday took its first crack at tinkering with the school division’s budget for next year.

Richmond’s elected officials continue to be at odds over the best way forward for a Richmond Public Schools facilities plan.

Chesterfield County’s elected leaders moved forward with knocking a penny off the real estate tax rate Wednesday, riling some in the community…

Richmond Superintendent Jason Kamras wants you to eat out more, for the schools' sake

Stickers that said “Stop the meals tax” were distributed at a meeting of restaurant owners and trade groups.