Art and activism in Richmond have long been intertwined. Nightly protests made that relationship more visible than ever.
0 Comments
Share this
1 of 2 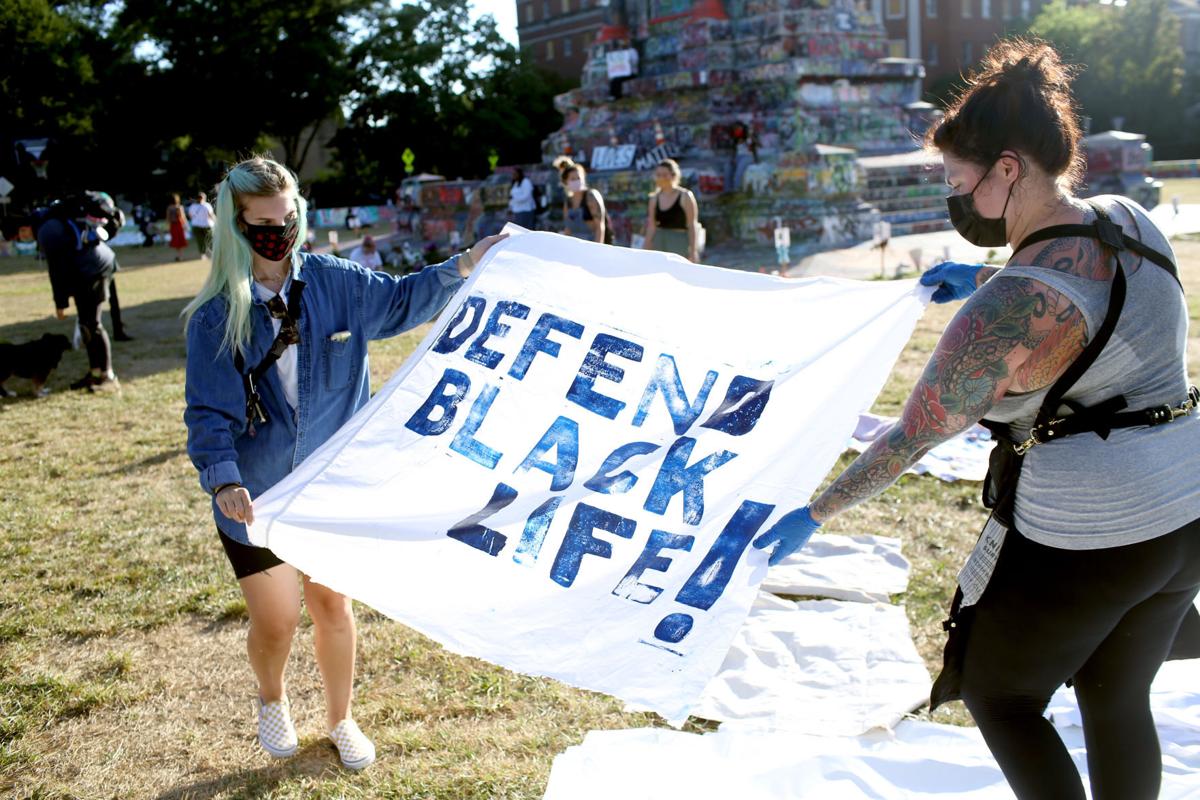 Ashley Hawkins (right), the executive director and co-founder of Studio Two Three, helped Jade Giddens of Richmond use a printmaking process to create a banner beside the Lee statue on Monument Avenue in Richmond earlier this month. 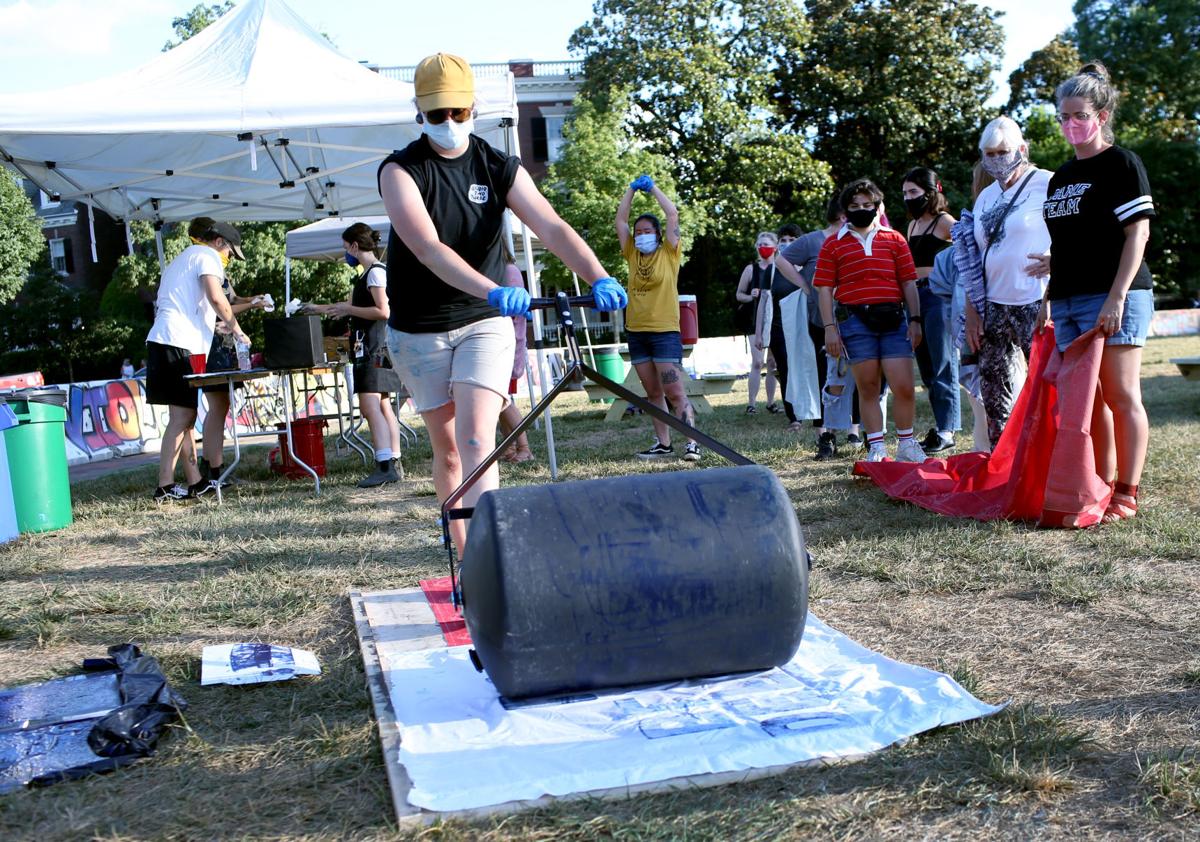 KB Brown of Studio Two Three uses a roller to help visitors make a printmaking banner with themes of Black Lives Matter at the circle of Lee monument in Richmond on Thursday, July 9, 2020.

A Richmond art organization is printing a message across the city: “DEFEND BLACK LIFE!”

The phrase, often written in the negative space of a rainbow, can be seen printed on T-shirts and jackets, posters and banners throughout Richmond. Each one was printed by Studio Two Three, a Richmond grassroots organization that has held three free print events at the Lee monument — now known colloquially as the Marcus-David Peters Circle — in recent weeks.

Studio Two Three’s staffers opted to use the phrase “DEFEND BLACK LIFE!” after Chelsea Higgs Wise, a prominent Richmond organizer and social worker, encouraged them to put something other than Black Lives Matter on their shirts.

“That’s the most basic statement you can make, that Black lives matter,” explained the studio’s development director, Kate Fowler. “We’re entering into a space of calling for people to defend Black lives, to take an active position.”

Along with holding print events, the studio also decided to make commemorative prints of photographs taken by community members of the ongoing unrest.

The goal, said Fowler, is to “celebrate this moment in history, put a date on it and reflect back what’s happening on the streets.”

The now-empty base of the Stonewall Jackson monument, as photographed from a bird’s-eye perspective, is the subject of one of the prints.

Another shows a young Black man donning graduation regalia in front of the Lee monument.

Studio Two Three has always been focused on uplifting the community, but its community print events and commemorative print sales have inspired an unprecedented level of connection. Local print shops have offered to work with Studio Two Three pro bono on projects.

Studios as far away as rural North Carolina have asked to use Studio Two Three’s designs on signs and banners in their own communities.

And, of course, it has collaborated with the various local artists who are featured on its commemorative prints.

When Turner began photographing the protests in early June, his goal was to document what was really happening, rather than the sensationalized version of events that he saw being spread on social media and in the news.

“Even my parents [thought] that everyone was looting,” Turner said. “I just wanted to show what I was seeing, which was the complete other side, because I was seeing nothing but peace.”

He combined digital and film photography to create “Rumors of War Wasn’t a Rumor,” overlaying an image of the Lee monument with two pictures of protesters’ signs — one of which became the work’s namesake — and cut-out images of graffiti.

Studio Two Three reached out to Turner after he posted the collage and other photos from the protests’ first weeks on his Instagram, mellowmarshal, to ask if it could use the image as one of its commemorative prints.

Later, when he asked if he could have a copy of the print, Fowler invited him to the studio to see the printing process, where, Turner said, he “fangirled” over the analog process. Soon after, Studio Two Three’s staff invited him to be an intern.

Lily Lamberta, founder of Richmond’s All the Saints Theater Company, spent three to four nights a week during the first few weeks of the city’s protests bringing art out into the streets to share with protesters. They distributed items for protesters to carry, including painted cloth banners, flat cardboard fists (called “flatsos”) and, of course, papier-mâché hands.

Political puppet theater is nothing new to Lamberta, who has been doing this work for more than 20 years and who founded All the Saints in 2006.

The idea behind bringing puppets to protests has various aims. “It’s a common language that unifies us all,” they said. “It makes us look bigger, it confuses our opposition, it unifies us: all ages, children and elders, and all races.” Puppets can even psychically protect demonstrators, forming a barricade between them and police.

Throughout the weeks of protests, Lamberta has given away flatsos to any person of color who wants to take one home. So far, they estimate they have given away (and subsequently remade) over 30.

At one protest, they recall standing beside a 13-year-old Black teen who held onto a large cloth banner, displaying a fist, for hours. At the end, they told him to keep it.

“If you give something away, that person might become an artist, might become an activist for the rest of his life, if he’s staring at a 12-foot banner of a fist in his bedroom,” they said.

Collaboration has always been an important part of Lamberta’s street theater, in no small part due to necessity; the larger-than-life puppets they make cannot be carried by just one person. They also invite members of the community to join the puppet-making processes, to help craft the massive papier-mâché figures and, in doing so, to learn about how to make art out of recycled, accessible materials.

“It’s really about sharing knowledge,” Lamberta said. “That’s why the work I do is so radical, even without the politics.”

Of course, the most collaborative work to have sprung out of recent protests is undoubtedly the base of the Lee monument. Covered in colorful graffiti, the monument has been photographed innumerable times, appearing across social media and in national news outlets.

“We had the Monument Avenue Commission; there were papers and meetings and this notion of recontextualization. And in the span of a week, our city recontextualized everything — our community did — for them, free of charge,” said Ashley Hawkins, the executive director and co-founder of Studio Two Three. “To me, that’s a testament to art and to the power of movements to change cities in an immediate fashion.”

Lamberta sees the reclaimed Lee monument as “a sacred altar space, remembering the violence that’s been done onto Black and brown and Indigenous people for hundreds of centuries.”

Richmond’s artists are not slowing down anytime soon. Lamberta continues to make their art available, encouraging activists and organizers of color to reach out to them via email at all thesaintstheatercompany@gmail.com about bringing their banners, puppets and signs to demonstrations.

Additionally, 6-foot-tall banners of its commemorative prints, created by Richmond Professional Lab, will soon appear across the city, gracing storefronts on Broad Street as well as appearing at The Valentine museum and at the Institute for Contemporary Art at VCU.

For Fowler, Richmond’s demonstrations against police brutality are not only the beginning of lasting civic change, but also of lasting change to the city’s relationship with art and activism.

“Unless they shut this building down, they can’t stop us and our artists from continuing to produce this material, because it’s our civic right and it’s our civic duty,” Fowler said. “So even if things start to backslide a little bit ... we can just keep producing, all day.”

Ashley Hawkins (right), the executive director and co-founder of Studio Two Three, helped Jade Giddens of Richmond use a printmaking process to create a banner beside the Lee statue on Monument Avenue in Richmond earlier this month.

KB Brown of Studio Two Three uses a roller to help visitors make a printmaking banner with themes of Black Lives Matter at the circle of Lee monument in Richmond on Thursday, July 9, 2020.