Making a Difference: He loved Thomas Jefferson High School as a student, as a teacher and now as a volunteer
0 Comments
Share this
1 of 5 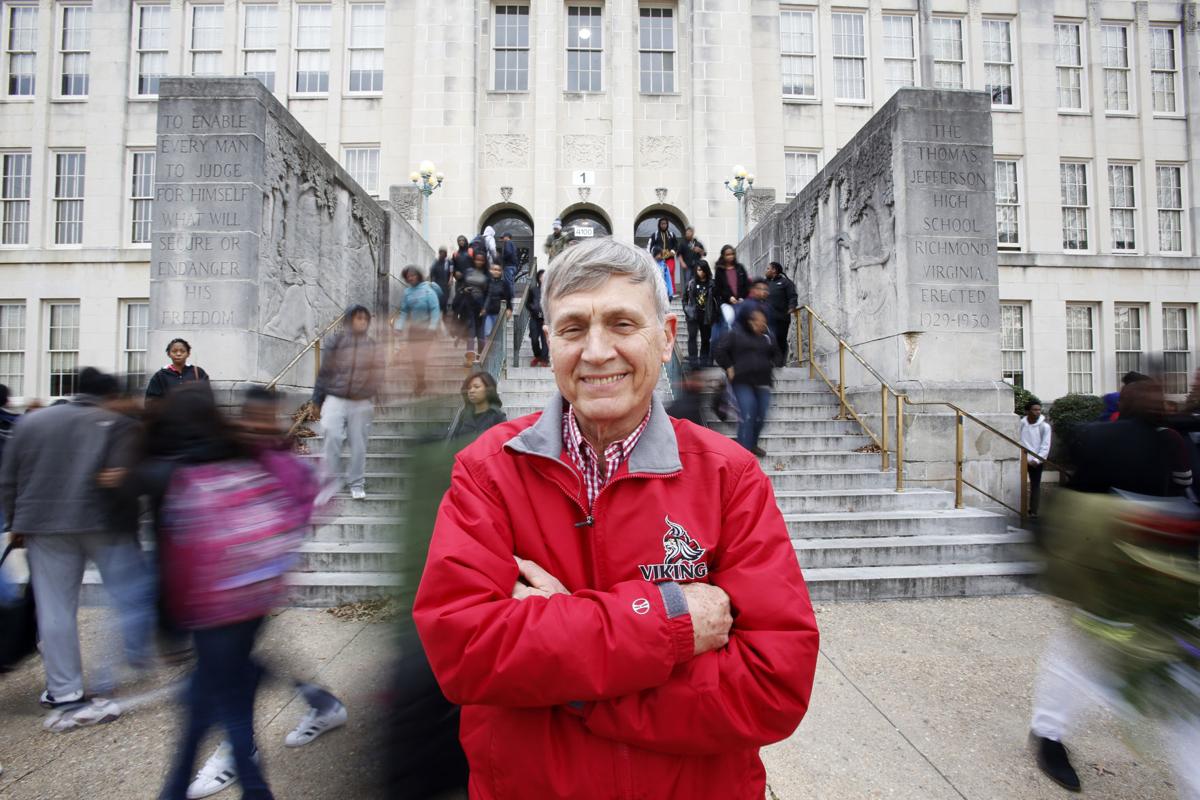 Russell Flammia is a Thomas Jefferson High School graduate, retired teacher and now volunteer at the school. Including his time as a student, he has been a fixture at the Richmond school for more than 50 years. 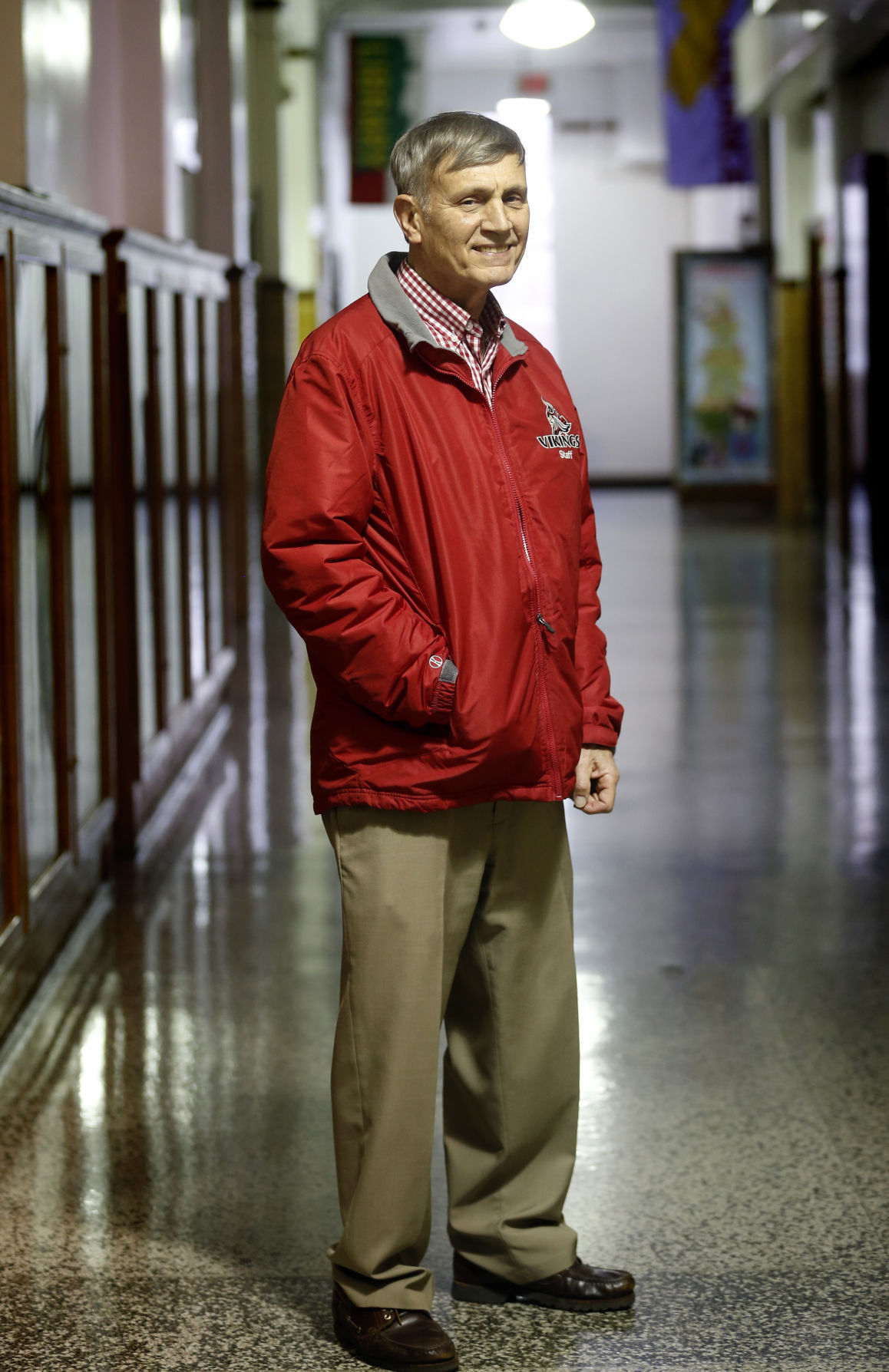 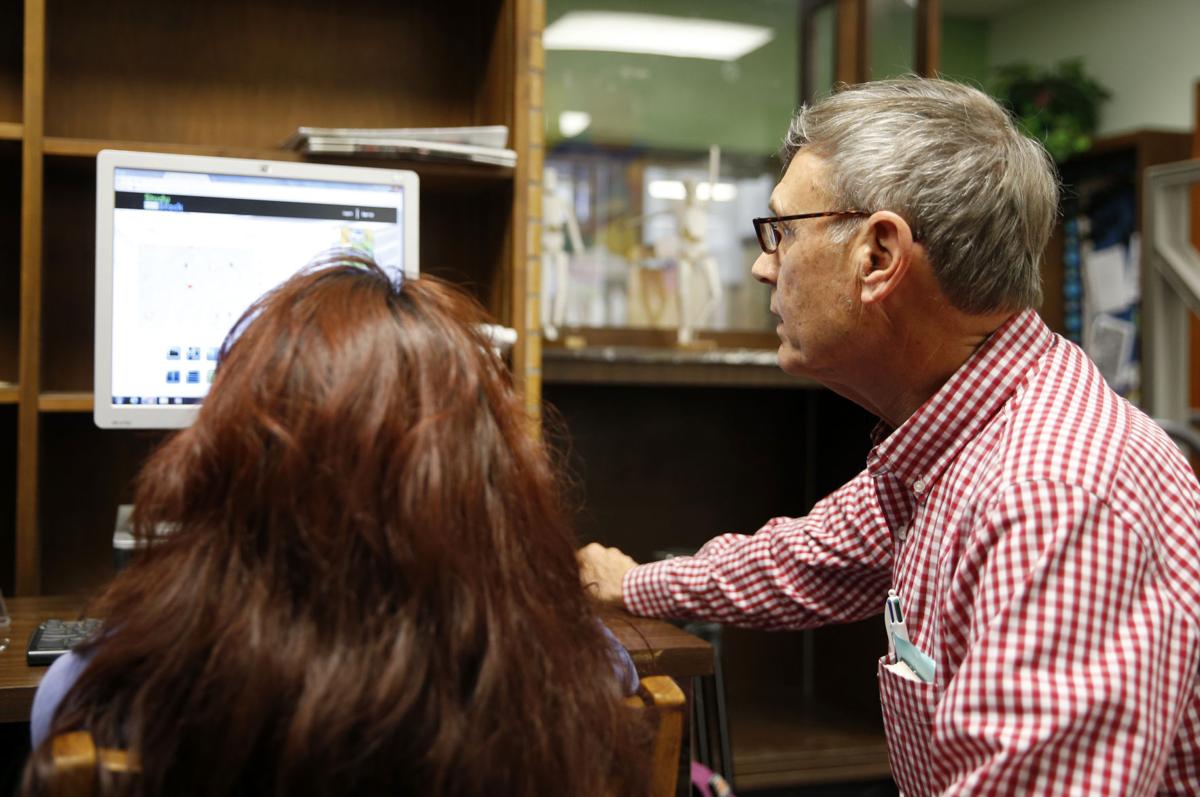 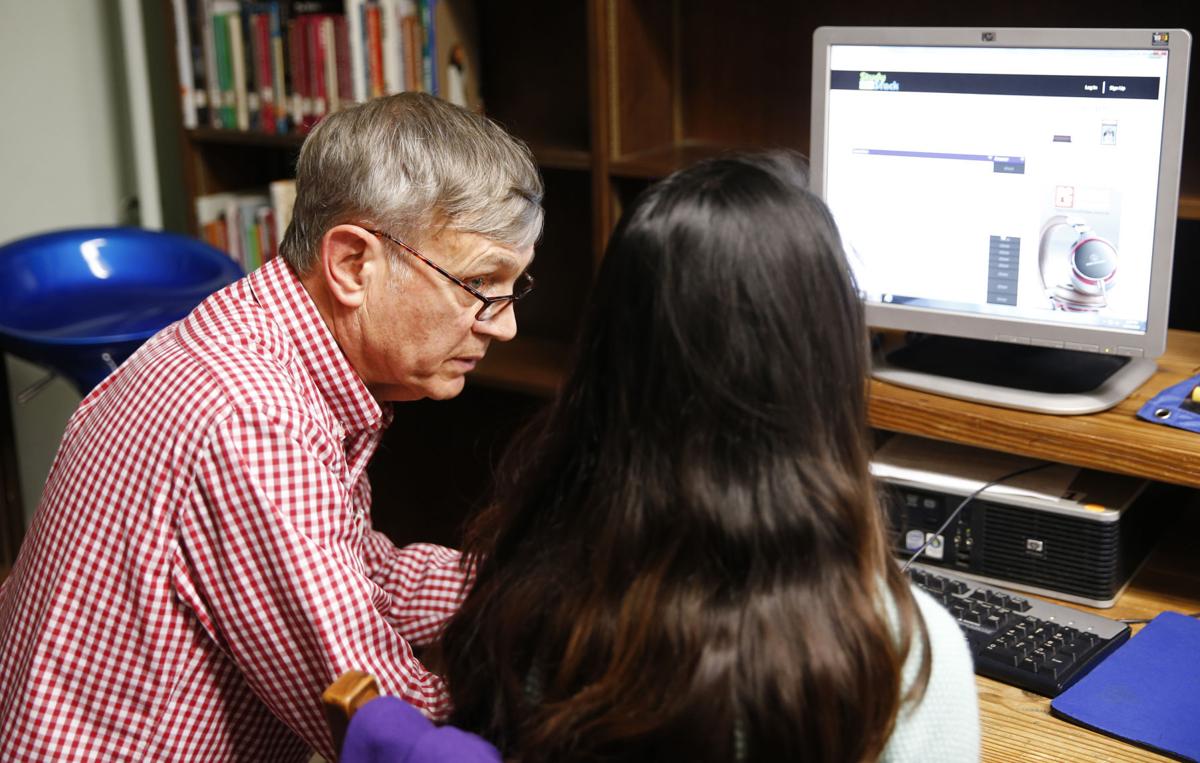 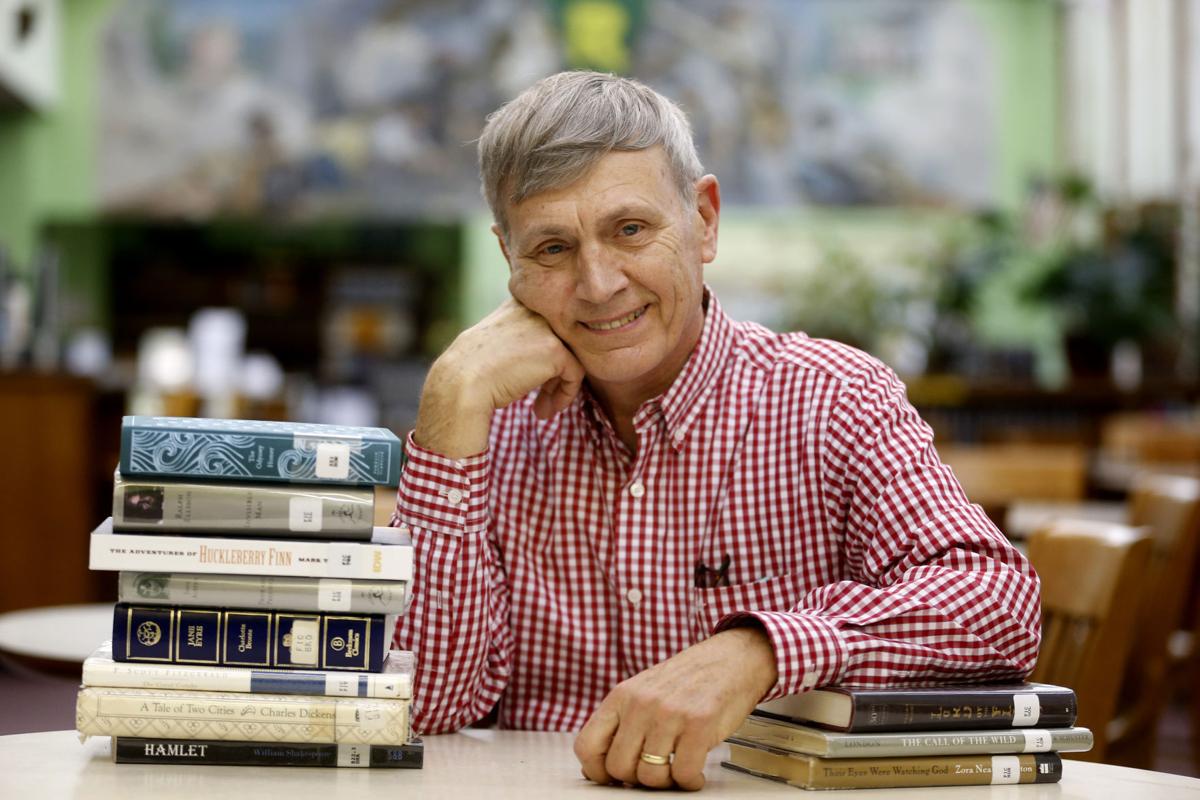 Russell Flammia is a Thomas Jefferson High School graduate, retired teacher and now volunteer at the school. Here he is photographed in the library at the school which he said is his favorite place there. Dec. 14, 2016.

If the three years as a student at Thomas Jefferson High School weren’t enough for Russell Flammia, then surely the 34 years as a teacher at the Richmond school would have given him his fill of the place.

Since 2001, a year after his retirement from teaching (“I took a year off, and then I failed at retirement,” Flammia said with a laugh), he has been the most faithful of school volunteers. He shows up to tutor students but also raises money for the nonprofit Tee Jay Vikings Fund and helps to organize class reunions.

“Here’s the joke: It took him 37 years to get out of TJ,” said a friend and classmate, Sidney Padow, “and then he went back, anyway.”

You could say he loves the place and just can’t stay away, though the allure is not just the school’s impressive art deco architecture.

“It means a lot,” Flammia said of the building, “but the students mean more.

“I do it because I like to see students achieve. This is a measure of their success. There’s a great deal of satisfaction when you accomplish something. I think it is for my students, too.

“To see the look on their faces when they’ve passed a test is pretty good. It’s very good, as a matter of fact.”

Flammia, 72, has devoted more than five decades of his life to the school — and you could say his devotion to TJ extends well beyond campus: His wife, Jackie, graduated from TJ a year after her husband.

She also is an educator, and they celebrated their 50th anniversary last June.

His mother completed the seventh grade, and his father — a second-generation Italian immigrant who worked as a caretaker for a West End estate — finished the fifth grade.

Flammia’s goal when he arrived at TJ was to finish high school, get a job, and go to work.

His aspirations were about to change — though he didn’t realize it at the time — when Charlie Cooper walked in the door of Flammia’s Spanish classroom in February 1960.

Cooper, the football coach and also the track coach, had noticed eye-catching running times Flammia had posted in his physical education class.

“Why don’t you come out for the track team?” Cooper suggested.

“It was a life-changing thing,” recalled Flammia, a sprinter. “I went out for track, and I had some success. I met people I would not have met otherwise who were very much upward-bound, and I got on the bandwagon.”

His participation with the track team led Flammia to the Key Club, where he encountered another role model: Russell Norment, the club’s sponsor.

“Mr. Norment taught me a lot about service and leadership,” Flammia said. “I’m indebted to (Cooper and Norment). They deserve a lot of credit. They inspired a lot of people.”

After he graduated from TJ in 1962, Flammia attended the now-defunct Frederick College near Portsmouth. Four years later, he returned to work at TJ, where he taught U.S. history, government and economics for 34 years.

He also coached a variety of sports, including the boys soccer team, which won three district titles, a regional championship and a state championship.

In the classroom, he enjoyed going from being a new teacher surrounded by teachers he recalled from his student days to the veteran teacher watching his students succeed in the wider world.

“That’s really satisfying for any teacher — to see students you taught grow up and become productive citizens,” he said.

That’s a feeling that has continued for Flammia through his volunteering at the school, where he helps students primarily with preparation for Standards of Learning tests. Beginning in October, he comes to school every day, pretty much all day, and works with whomever needs the help.

“When we’re together at a VCU basketball game or on the street, his old students come up to him and hug him and kiss him and praise him,” Padow said. “It’s just really unbelievable.”

“He’s amazing,” said Albert Negrin, a 1976 graduate of the school. Negrin knows Flammia from their work together for the Tee Jay Vikings Fund, a 501(c)(3) nonprofit that Negrin and Flammia helped to start.

During the past four years, the Vikings Fund — through donations from businesses, the community and TJ alumni — has raised more than $175,000 that has been used to renovate the school’s locker room; build a fitness center; purchase a new marquee and a baseball scoreboard; install whiteboards in classrooms; restore the Julian Binford mural in the library; and award scholarships.

The Vikings Fund also has partnered with neighborhood churches on an after-school meals program for students participating in extracurricular activities.

“Part of my motivation in helping alumni plan their reunions was to foster a continuing interest and support of our students,” said Flammia, who invites returning classes as part of their reunions to tour the school, eat lunch and enjoy a listen to the Tee Jay Cadet Corps Alumni Band.

Ask him to name his favorite place in the school, and “library” is first on the list. That’s usually where you can find him during the school day.

On a recent afternoon in Flammia’s working corner of the library, four students were seated in front of computers, researching one aspect of history or another. On bended knee so he could be at eye level with the computer screen, Flammia was chatting with one student about the Industrial Revolution.

Even after all of these years in the classroom, Flammia never quite knows what will reach a student. He was trying to help one youngster understand the significance and the human toll of the Battle of Iwo Jima during World War II.

“As soon as I showed him that, you could see a light bulb go on in his head,” Flammia said. “It got through.

“You never know what’s going to click, but when you see it click, it’s great. It’s great.”

Our annual "Making a Difference" series highlights the work of everyday people doing extraordinary work in our community. Readers nominated dozens of people whose work is improving the lives of others.

Tuesday: A mother's experience with her dyslexic son led her to help raise awareness of the disorder.

Today: For almost 60 years, this Thomas Jefferson High grad has been true to his school.

Look for profiles every day through Saturday.

The regional board of the Maggie L. Walker Governor’s School voted unanimously Thursday to remove the achievement portion of a two-part admiss…

Russell Flammia is a Thomas Jefferson High School graduate, retired teacher and now volunteer at the school. Including his time as a student, he has been a fixture at the Richmond school for more than 50 years.

Russell Flammia is a Thomas Jefferson High School graduate, retired teacher and now volunteer at the school. Here he is photographed in the library at the school which he said is his favorite place there. Dec. 14, 2016.