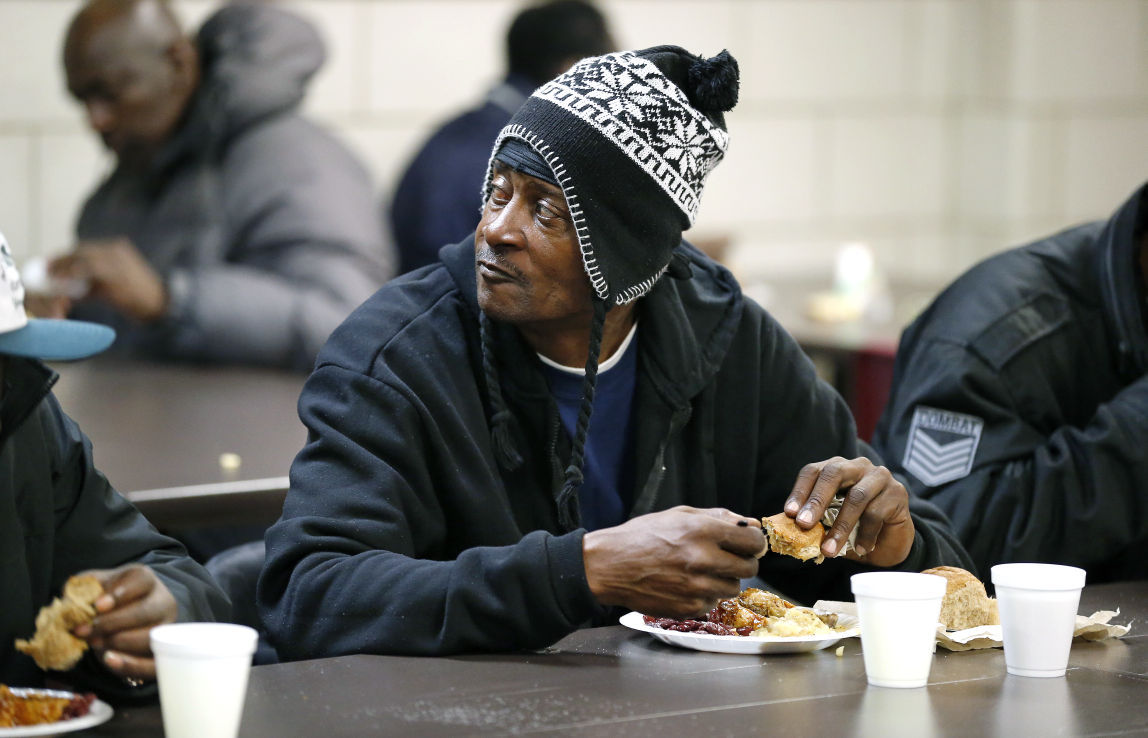 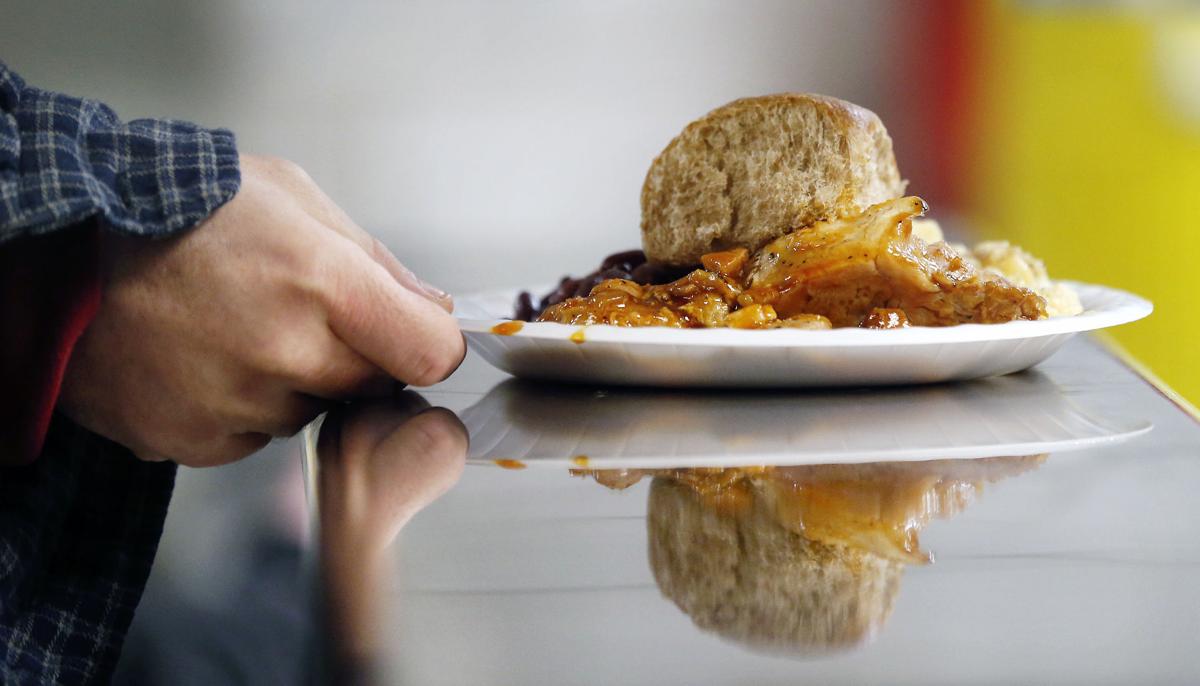 A diner picks up his plate of food during dinner service at the Salvation Army on West Grace Street Wednesday, January 27, 2016. They are ending the program because of violence and staffing issues. 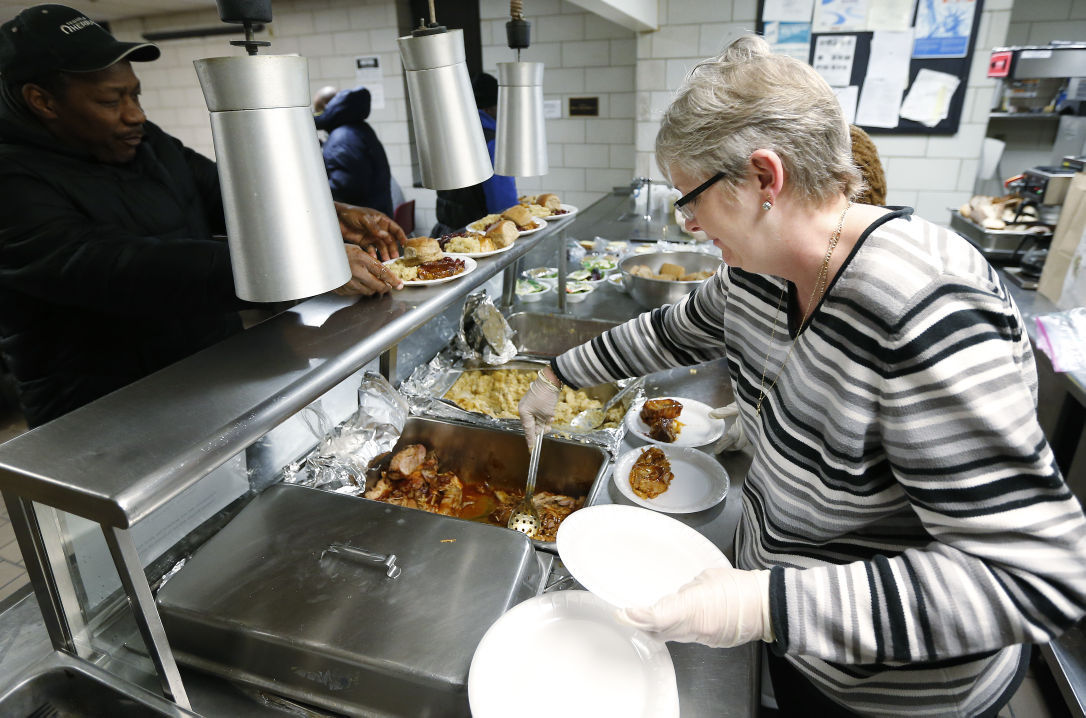 Barbara Washington serves dinner to the the needy at the Salvation Army on West Grace Street Wednesday, January 27, 2016. The program is being stopped because of violence and staffing issues.

One after another, they called it a blessing as they shuffled through the line, picking up plates with barbecued ribs, chicken, butter beans and mashed potatoes.

“If they close it down, I don’t know what they’ll do,” said Tyrone Orr, 51, of South Richmond, one of 131 people who were fed by volunteers at the Salvation Army of Central Virginia’s shelter at 2 W. Grace St. Wednesday night. “A lot of people depend on it.”

“Midway through 2015, we began review of the community meals program and whether the growing number of calls to the police, property damage and staff strain justified continuing the service at the cost of serving our shelter residents,” wrote Timothy Carter, the organization’s area commander, in a statement posted on its website last week and sent to community groups and churches that assist the program.

Since 2013, when Freedom House shut down its Conrad Center soup kitchen and intake and two shelters amid financial struggles, the Salvation Army has offered breakfast from Monday through Friday and dinner seven days a week at the downtown office and shelter.

“It’s always kind of been our hope that it would be a temporary type thing,” said Matt Pochily, a Salvation Army spokesman. “Two-and-a-half years later, we’re still doing it.”

Pochily and many of the people who stopped by for food Wednesday night said the community meals program is the largest in the area and the only one that offers a meal every day.

Some people in line for a meal said they were living on the streets, crashing somewhere new every few weeks or just having a hard time scraping together enough money for food.

“I’m not homeless, I’m just poor,” said David Jackson, 53, who says he spent two years in jail after a felony burglary conviction and has struggled to find a job ever since. He has come to the West Grace Street center for several years and has seen brawling and the erratic behavior that comes with the population it serves, though with Richmond Police headquarters two blocks away he says it has rarely gotten serious.

“I’ve seen guys fight. I’ve seen guys say they’re going to murder somebody. It’s crazy,” he said. “I don’t know where a lot of these guys are going to get their meals. ... Eighty percent of the people are some kind of addict. I’m an alcoholic.”

The Salvation Army shelter houses and provides employment, education, addiction treatment and other “transformational services” for about 60 residents. The police were called more than two dozen times in 2015, mostly because of fights between the visitors but also occasionally involving shelter residents, one of whom got a black eye in one such encounter last week, Pochily said. Shelter workers and their guests Wednesday night said another man who came for the community meal broke a window recently in a fit of rage.

Pochily said the meals program has also taken time away from case workers at the expense of working to keep their clients in the shelter off the streets.

State and local agencies and community organizations that serve the homeless have been notified.

For Kelly King Horne, executive director of Homeward, the nonprofit planning and coordination organization for homeless services in the Richmond region, how big a void the Salvation Army’s decision will leave remains to be seen. Many of the people the meal program serves aren’t homeless but “food insecure,” Pochily said, evidenced by increases in attendance near the end of the month when food stamps run out.

Homeward will be participating in a statewide homelessness count tonight and Thursday. Last year, the eight-county region that includes the city counted 818 men, women and children, most in shelters.

“Where we’ve seen the change in homeless services is to get people in housing,” she said. “Then they don’t need these kinds of services in the same kind of way. But we don’t want people to suffer in the short term, either.”

Lorae Ponder, executive director of HomeAgain, which houses 73 people at emergency shelters and one transitional housing program, said some of her men use the Salvation Army program when meals from other organizations aren’t available.

“I definitely support their assessment of their own capacity. Those issues are very real in homeless services,” she said.

But as she and her fellow volunteers doled out the last of the food from the metal pans at the shelter’s small kitchen Wednesday night, Denise Winfree, who lives in Mosby Court and has been volunteering at the Salvation Army for about a year, couldn’t contain her disappointment.

“We need more love and unity,” she said. “They should keep this. Some people can’t take care of themselves. Some were never taught to, some don’t know how. ... They’re still human beings and they need help.”

Next month the Salvation Army will stop serving meals because of concerns about violence and staffing.

A diner picks up his plate of food during dinner service at the Salvation Army on West Grace Street Wednesday, January 27, 2016. They are ending the program because of violence and staffing issues.

Barbara Washington serves dinner to the the needy at the Salvation Army on West Grace Street Wednesday, January 27, 2016. The program is being stopped because of violence and staffing issues.