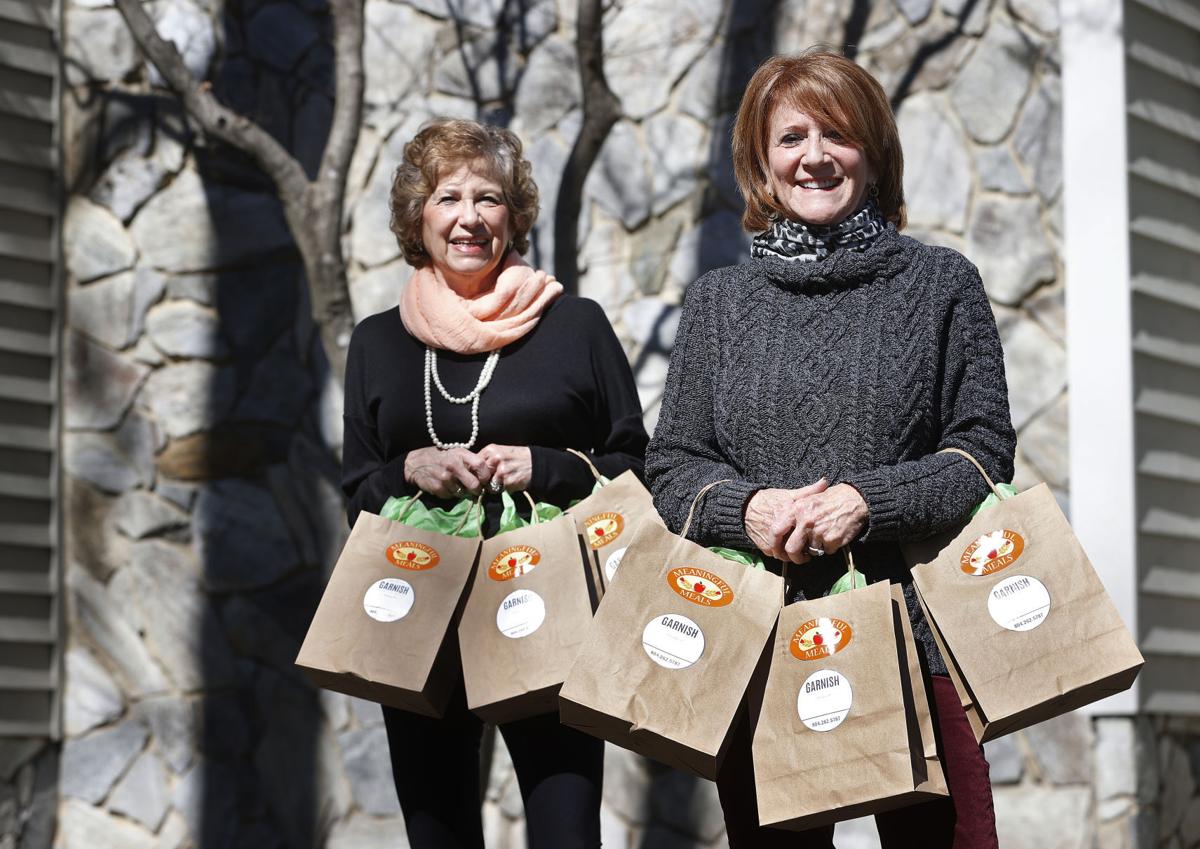 Janet Meyers (left) and Claudia Biegler, who live in Henrico County and have known each other since high school, hold bags they use to deliver Meaningful Meals to Richmond-area front-line workers. Louis Campbell of Garnish Catering is their “third partner.” 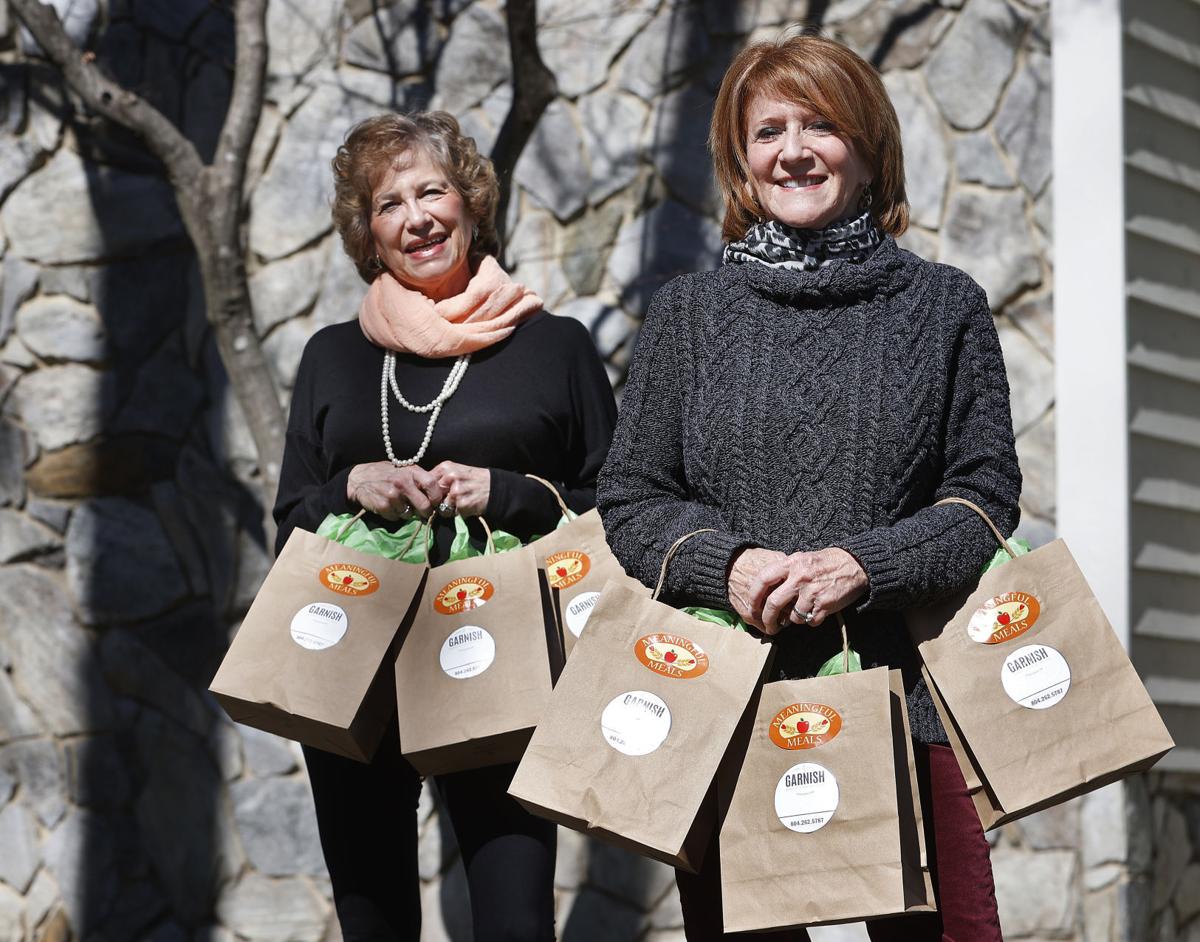 (L-R) Janet Myers and Claudia Biegler, founders of Meaningful Meals, hold bags they use to deliver meals to frontline workers in the Richmond area. Photo was taken on Wednesday, March 3, 2021.

As COVID-19 began its spread through the region, Claudia Biegler and Janet Meyers and a few friends got together to send lunches to a friend’s daughter and her co-workers on the recreation staff at a local senior assisted living community.

“We knew how stressed she was, and we knew how hard they were working,” Meyers said. “We just wanted to do something. We felt really kind of helpless like everybody else in the community.”

It was a nice gesture, warmly received by those who enjoyed the lunches.

“That was that,” Biegler recalled, “until Janet and I were taking a walk, and we said, ‘What are we going to do in April?’”

For April, they did the same for a group of nurses at a local hospital, and they were off and running.

Almost a year later, Biegler and Meyers marvel at the community support that has coalesced around them as they arranged for meals to be delivered — 10 or 20 or 75 at a time — to all sorts of front-line workers, not just those working in health care, but educators, pharmacists, 911 call center operators and numerous nonprofit organizations working with underserved communities, among others.

The upshot is, they are on pace to deliver their 2,000th meal by the end of April. That’s a lot of sandwiches and salads.

Along the way, they picked up a name for their effort: Meaningful Meals.

“We’re retired teachers and community volunteers, never expecting, never dreaming it would turn into what it has,” Biegler said. “It’s just been extraordinary.”

Biegler and Meyers, both of whom live in Henrico County, have known each other since high school, but have become closer friends in more recent years as they are part of a circle of friends who travel together, have dinner together, and send meals to one another in times of need.

“It’s a group that’s warm, caring and loving,” Biegler said. “We love to feed each other.”

In a way, through Meaningful Meals, Biegler and Meyers have expanded the circle.

They have received monetary support from those who appreciate their mission, and more hands-on help from others, such as 13-year-old Morgan Smartt, who helped design the tags that go on bags of Hershey Kisses that she and her family, including her 8-year-old brother, Ethan, put together to accompany every meal.

The tags read: “Sending you kisses for helping others” at top and “Love … meaningfulmeals.org” at the bottom.

However, as things happened so quickly, Biegler and Meyers received a much-needed assist from the Richmond Jewish Foundation, a nonprofit that stepped in to manage receipt and disbursement of funds, allowing donors to receive a tax benefit and permitting Biegler and Meyers to focus on their mission of delivering meals.

The meals themselves are left to Louis Campbell — “our third partner,” Biegler says — who is owner of Garnish Catering. Campbell said he’s known Biegler and Meyers since he was a kid and that Biegler used to give him a ride to Sunday school.

“It’s kind of funny the way the world kind of circles around,” Campbell said.

Garnish has taken a “major hit” in its business having lost weddings and galas and other events because of the pandemic.

“We make money when we feed people in groups, so when you can’t feed people in groups, we pivot,” Campbell said. Besides shifting to meal deliveries and trying to capitalize on every holiday, part of the pivot has been involvement with Meaningful Meals, which has helped keep things going as Campbell committed early in the pandemic to not cut staff or pay despite the downturn in business.

“We’re kind of a family, so let’s just ride it out and see where it takes us,” he said.

And Meaningful Meals has been a gratifying part of that journey, Campbell said.

“When my guys do the deliveries, people are very thankful for them and excited to see them,” he said. “People love helping out other people, so we’re all in this together.

“If we can play a small part in this, we’re more than happy to.”

Those receiving the meals appreciate the acknowledgment of their work, and Biegler and Meyers appreciate being able to do that.

“It makes our hearts sing, and it brings us to tears,” Biegler said. “It has brought such joy to us to be able to do this for the community and for us to have such community support. It’s a feel-good for everybody.”

Before the pandemic, Biegler facilitated a volunteer mentor program at Laburnum Elementary in Henrico through the Richmond Jewish Coalition for Literacy.

“We could no longer mentor once the schools closed,” Biegler said. “I was grieving for my children I was working with. For me, it was a tremendous loss not to be with the children, so I was seeking something else to do to help the community.”

A year of COVID: Richmond stories about living through a pandemic the last year

Janet Meyers (left) and Claudia Biegler, who live in Henrico County and have known each other since high school, hold bags they use to deliver Meaningful Meals to Richmond-area front-line workers. Louis Campbell of Garnish Catering is their “third partner.”

(L-R) Janet Myers and Claudia Biegler, founders of Meaningful Meals, hold bags they use to deliver meals to frontline workers in the Richmond area. Photo was taken on Wednesday, March 3, 2021.