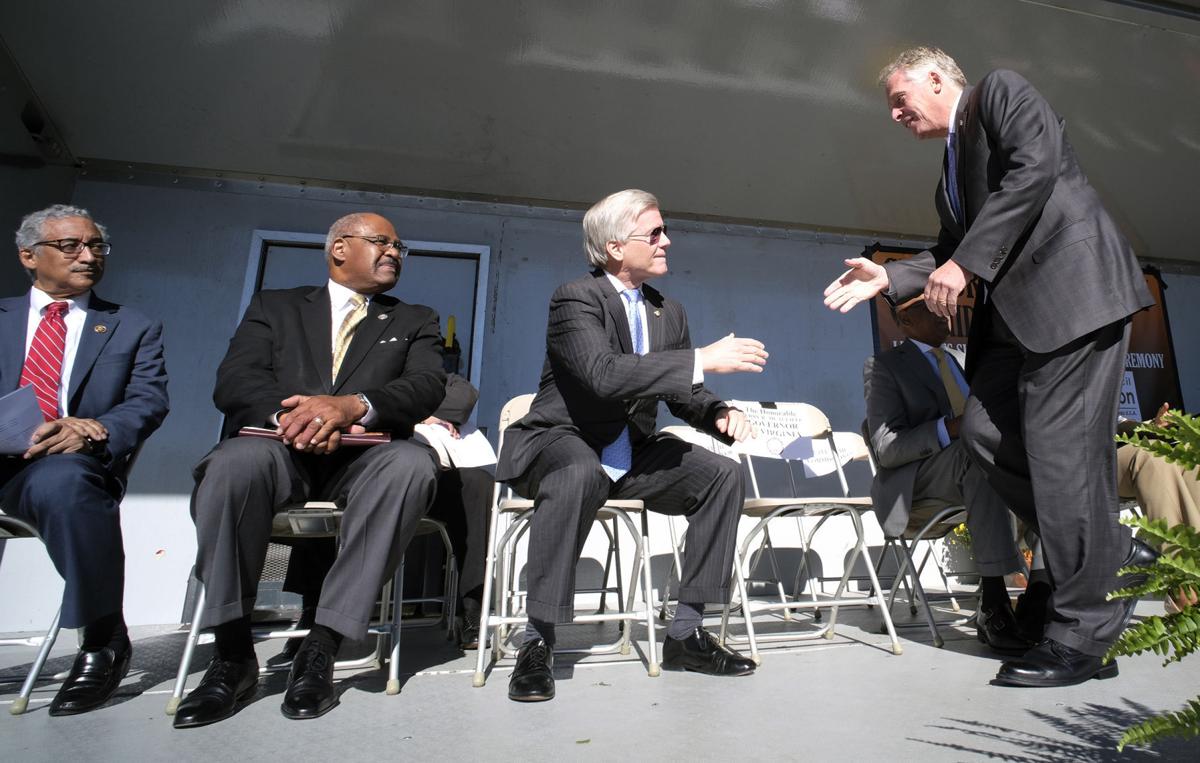 A marker near the site of the Lumpkin’s Slave Jail Development Ceremony in Richmond, VA Monday, Oct. 10, 2016. 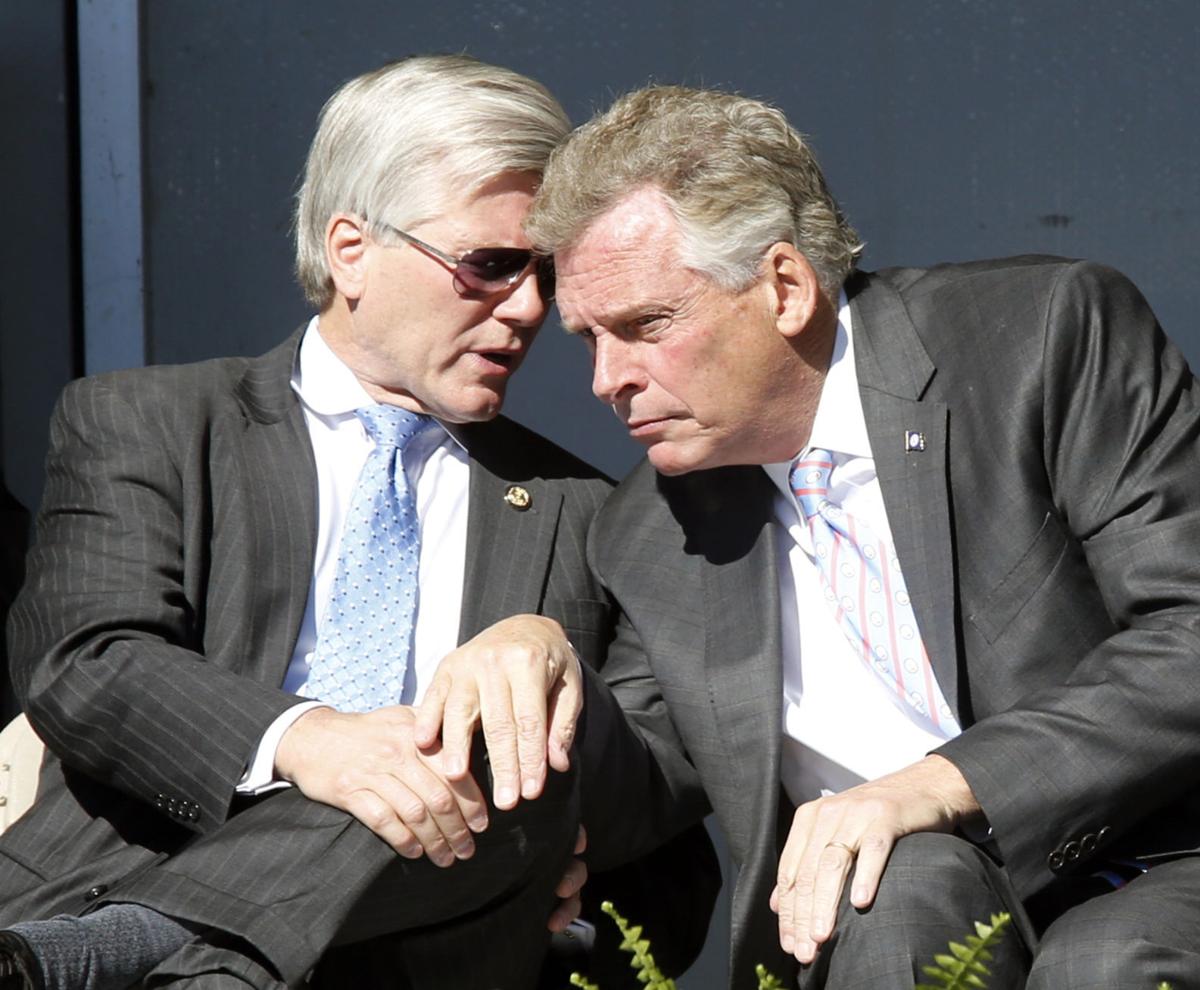 RIGHT: Former Gov. Bob McDonnell (left), who first allocated $11 million in state funding for the project in 2013, talked with Gov. Terry McAuliffe at Monday’s ceremony. ABOVE: The shadow of a fence fell across the walkway beside a marker at the Lumpkin’s Jail site. 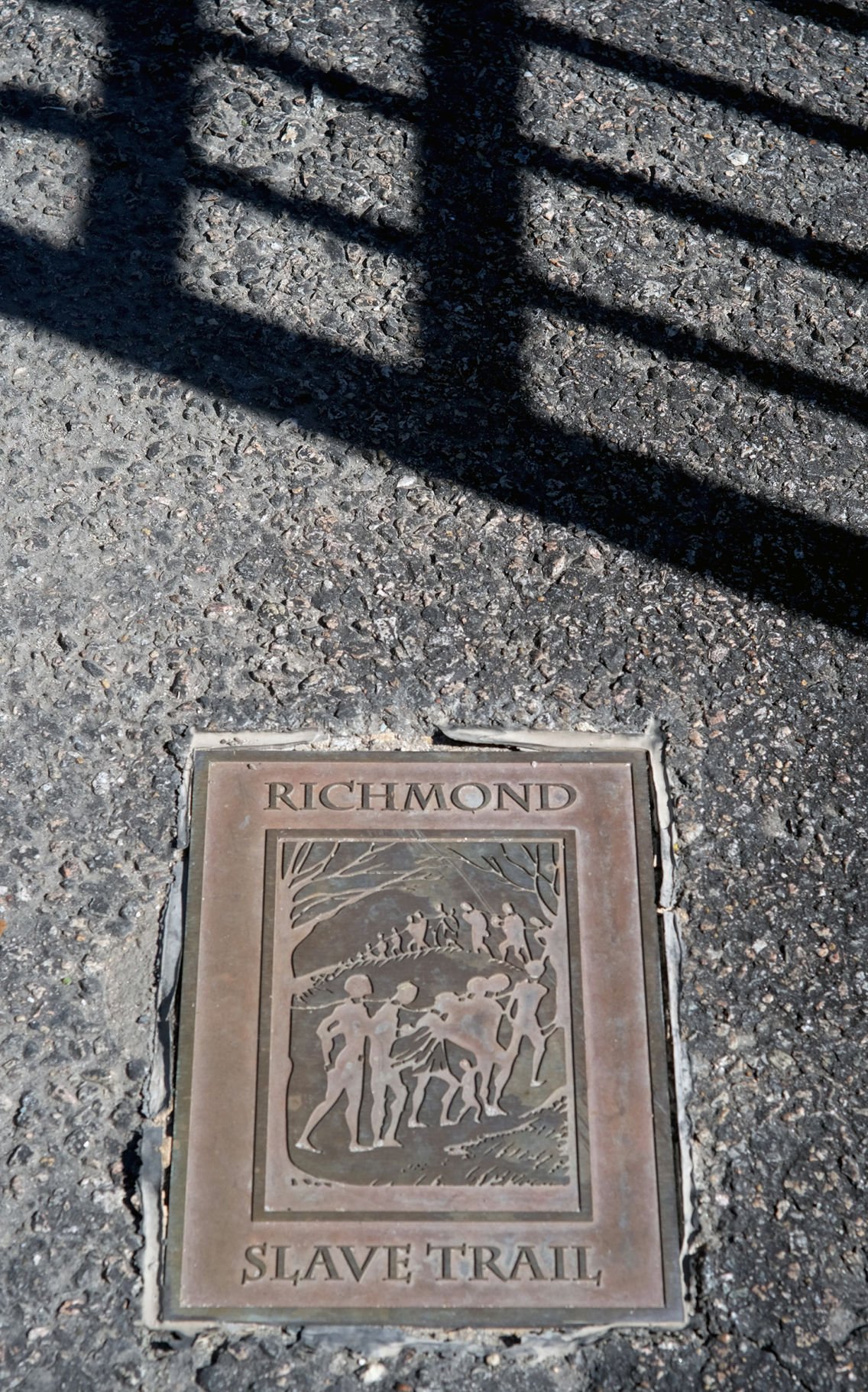 The shadow of a fence falls across the walkway beside a marker during the Lumpkin’s Slave Jail Development Ceremony in Richmond, VA Monday, Oct. 10, 2016. 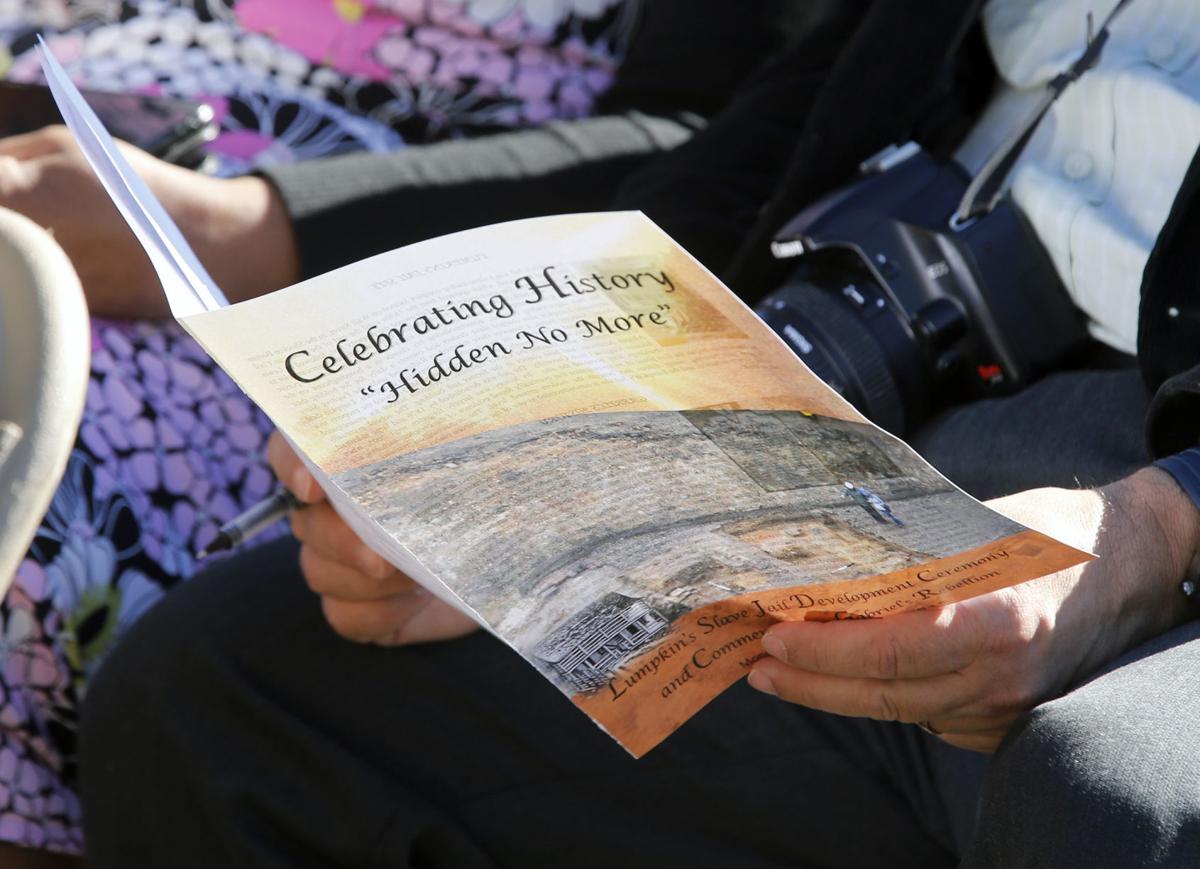 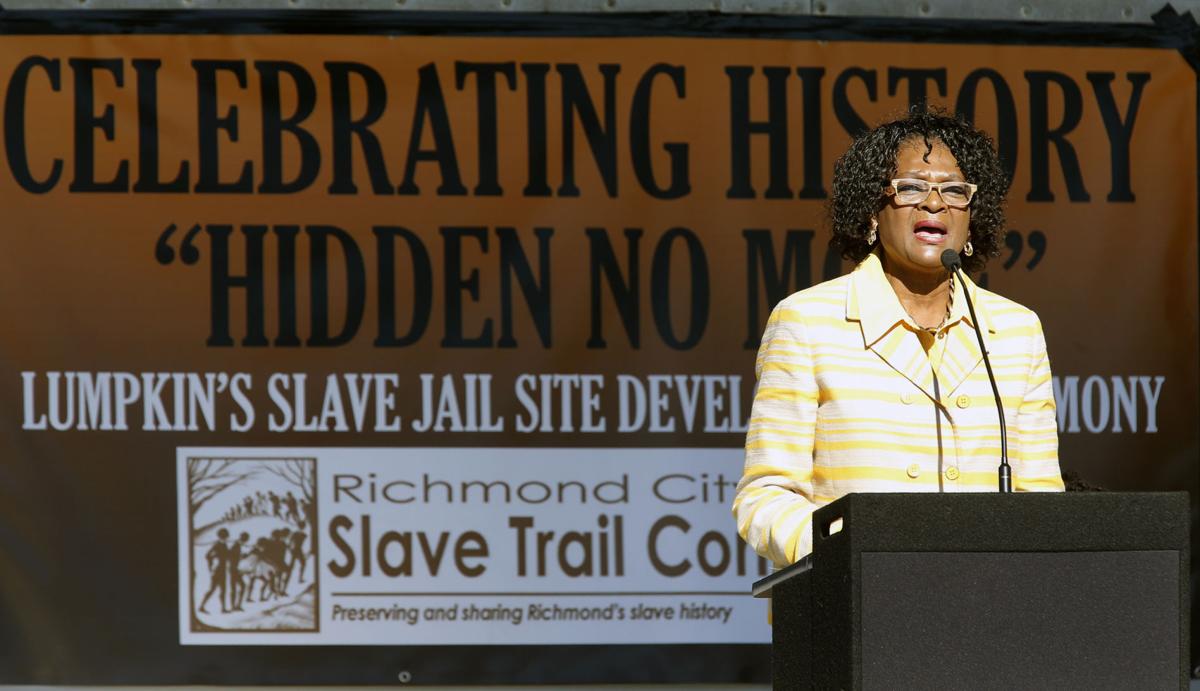 It was something less than a groundbreaking, but that did not stop a large assembly of state and local officials, including two Virginia governors, from breaking out the golden shovels Monday at the Lumpkin’s Jail site in Shockoe Bottom.

At the end of an elaborate, two-hour ceremony, officials huddled together to dedicate a tree at the remains of the infamous slave-trading facility long pegged for development as a historical center. It’s not yet clear what might grow around that tree, but officials promised Monday that, after years of talk, something will indeed happen.

With just a few months left in his term, Mayor Dwight C. Jones officially announced a $1.4 million contract award on a project he earlier linked to his failed 2013 proposal for a new minor league baseball stadium in Shockoe. He was joined by Gov. Terry McAuliffe, former Gov. Bob McDonnell and more than a dozen state lawmakers, City Council members and mayoral candidates.

In a speech, Jones stressed the importance of confronting and honoring the past, saying Richmonders need to be “comfortable making each other uncomfortable.”

“It is only through a true honoring of our complete history that we can hope to fully address the complexities of the race issues that remain so deeply rooted today,” said Jones, who will leave office in January. “All of us have got to live with the legacy of slavery, but we don’t have to be enslaved to the consequences of bitterness.”

McDonnell, who first allocated $11 million in state funding for the project in 2013, was a guest of honor at the ceremony, one of his most high-profile public appearances since the U.S. Supreme Court overturned his 2014 bribery convictions and prosecutors dropped the case.

The former governor said the project will be a much-needed “beacon of hope and reconciliation,” but he said bricks and mortar alone cannot mend the racial divide.

City officials announced the hiring of SmithGroupJJR, a firm that co-designed the just-opened National Museum of African American History and Culture on the National Mall in Washington. Lonnie G. Bunch III, the director of the new museum, will serve as a “scholarly adviser” to the local project, officials said.

With a new mayor and a remade City Council taking office early next year, activists pushing for a larger memorial park in Shockoe are hoping to continue to press their case as the city’s process unfolds. Officials acknowledged Monday that much about the project is still undetermined.

“We’re not sure how big this thing will be,” said Jeannie Welliver, a project manager with the city’s Department of Economic and Community Development. “Whether it’ll be a landscape, a small building, a large building. Whether it will require fundraising. But we will work as a community to figure that out. And that starts today.”

A total of $19 million in state and local funds has been allocated to the project.

McAuliffe, who has kept the Lumpkin’s Jail funding in the state budget since taking office, offered a suggestion for what could be built on the site. He recalled Abraham Lincoln entering Richmond at the end of the Civil War and addressing the former Confederate capital’s freed slaves, adding that he finds it “somewhat odd” that Richmond has no Lincoln statue.

“I’ll lead the fundraising effort,” McAuliffe said. “We need a statue of Abraham Lincoln right here at Lumpkin’s Jail to show the world the part of history that we have here.”

There is, in fact, a statue of Lincoln and his son, Tad, at the Richmond National Battlefield Park Visitor Center at Tredegar Iron Works. The life-size bronze statue was unveiled there in 2003.

A marker near the site of the Lumpkin’s Slave Jail Development Ceremony in Richmond, VA Monday, Oct. 10, 2016.

RIGHT: Former Gov. Bob McDonnell (left), who first allocated $11 million in state funding for the project in 2013, talked with Gov. Terry McAuliffe at Monday’s ceremony. ABOVE: The shadow of a fence fell across the walkway beside a marker at the Lumpkin’s Jail site.

The shadow of a fence falls across the walkway beside a marker during the Lumpkin’s Slave Jail Development Ceremony in Richmond, VA Monday, Oct. 10, 2016.