After weeks of protests and complaints from students and faculty, the University of Richmond board of trustees announced Monday it would hit the reset button on the controversial names of two campus buildings.

The board said it would form a commission to establish principles on renaming, ensuring a “fresh start.”

In a statement, the board said it and President Ronald Crutcher are “committed to ensuring a broader, more inclusive process to determine how decisions are made about questions of renaming going forward.”

The announcement came two hours before the faculty senate announced it had ratified a vote of no-confidence in the board’s top member, rector Paul Queally, calling for him to resign.

The no-confidence vote came a little more than a week after the faculty senate censured Queally for his comments during a meeting to discuss the building names, in which seven members of the faculty said he referred to students as Black, Brown and “regular students,” and a Black employee said she was interrupted and demeaned by Queally.

A university spokeswoman said Queally would have no comment Monday night.

Of the 352 faculty who cast a vote, 87% voted they had no confidence in Queally, 9% voted in support of the rector, and 4% voted to abstain; 82% of eligible voters cast a ballot.

“These results clearly show that the university faculty have lost confidence in the ability of rector Queally to lead the university community effectively in this challenging and important moment in our institutional history,” said Thad Williamson, faculty senate president, in a statement. “This vote is clear indication that something has gone seriously awry and needs to be addressed, for the good of the entire campus community.”

The vote from the faculty is purely symbolic, with no material effect on university leadership. The board has the power to remove its own members if their actions may negatively reflect on the university, the faculty’s motion said.

The debate over building names has centered around Ryland Hall and Mitchell-Freeman Hall. Robert Ryland, the university’s first president, owned at least 24 slaves. Douglas Southall Freeman, a UR trustee and rector from 1925 to 1950, spoke in support of segregation, white supremacy and eugenics.

In February, UR changed the name of Freeman Hall to Mitchell-Freeman Hall, adding the name of John Mitchell Jr., a former enslaved man who rose to the rank of editor of the Richmond Planet newspaper.

Crutcher, who is Black, said at the time that keeping the names of Ryland and Freeman would serve as a “braided narrative,” telling both the proud and ugly sides of university history. Weeks later, he admitted the university had not handled the renaming process as well as it should have.

Two trustees, Georgia Nugent and John Roush, will lead the commission, consulting with Crutcher and other senior leadership. Retired President Ed Ayers and professor Julian Hayter will serve as advisers, the board said. The commission will conduct substantive and inclusive conversations, the board said in a statement.

“In formulating their recommendations to the board, the planning group will carefully consider the approaches taken by other institutions,” the board said.

Virginia Commonwealth University, Virginia State University and James Madison University are among the Virginia schools that have changed building names associated with the Confederacy, slavery or segregation in the past year. VCU formed a group to study its building names two years before its board of visitors voted on changes.

Last week, the UR board said it had “suspended” its decision not to change the names of the two buildings. But that statement wasn’t enough to stop the Black Student Coalition from leading a march across campus on Wednesday or the faculty from proceeding with its vote of no confidence on Monday.

“It feels like an empty gesture,” Kayla Corbin, a 21-year-old UR senior who is Black, said Wednesday. “We want the university to explicitly commit to recognize us.”

Corbin held a megaphone in her hand, leading about 300 Richmond students, dressed in Black, around the south end of campus.

“No justice, no peace, no racist trustees,” the students chanted.

Kristen Starks, a 20-year-old junior biology major who is Black, said after the protest that there are many students, faculty and staff who make Black students feel welcome. But at an institutional level, UR isn’t completely compatible with the well-being and inclusion of Black students. How welcome she feels at UR depends on the place and the situation, she said.

There are about 4,000 students at UR, and 6% identify as Black, according to the school.

The Black Student Coalition originally made three demands of the board: that it change the names of Ryland Hall and Mitchell-Freeman Hall; that it allow students to designate one class as pass/fail; and that it subsidize off-campus counseling for Black students. The faculty agreed to let students convert one class from a traditional A to F grading model to pass/fail, noting the hardships of the semester.

When the students met with Queally on March 26, he asked them what other demands they had. The students came up with three more, asking for a terrace connected to Ryland Hall not be named for an enslaved person or people; that the university hire a chairperson for the nascent Africana Studies department; and that the university’s multicultural space be given its own building.

Starks said there are only two Black counselors on campus and that counseling is most beneficial when the counselor can identify with the client. The students asked the university to fund off-campus counseling services to “provide a supplement for the unique experiences and conditions Black students might face,” she said.

“The major narrative that we are trying to convey is that you need to listen to Black students,” Starks said.

The board’s lack of action seemingly has rankled alumni, too. Graduates of the university circulated flyers on Facebook urging others to withhold donations until the names were changed, to sign petitions urging change and to write messages to the board. One flyer read, “I’ll keep my dollars till you #change the names.”

Last week, the university announced it would reschedule its annual giving day, an event that raised $1.55 million last year. 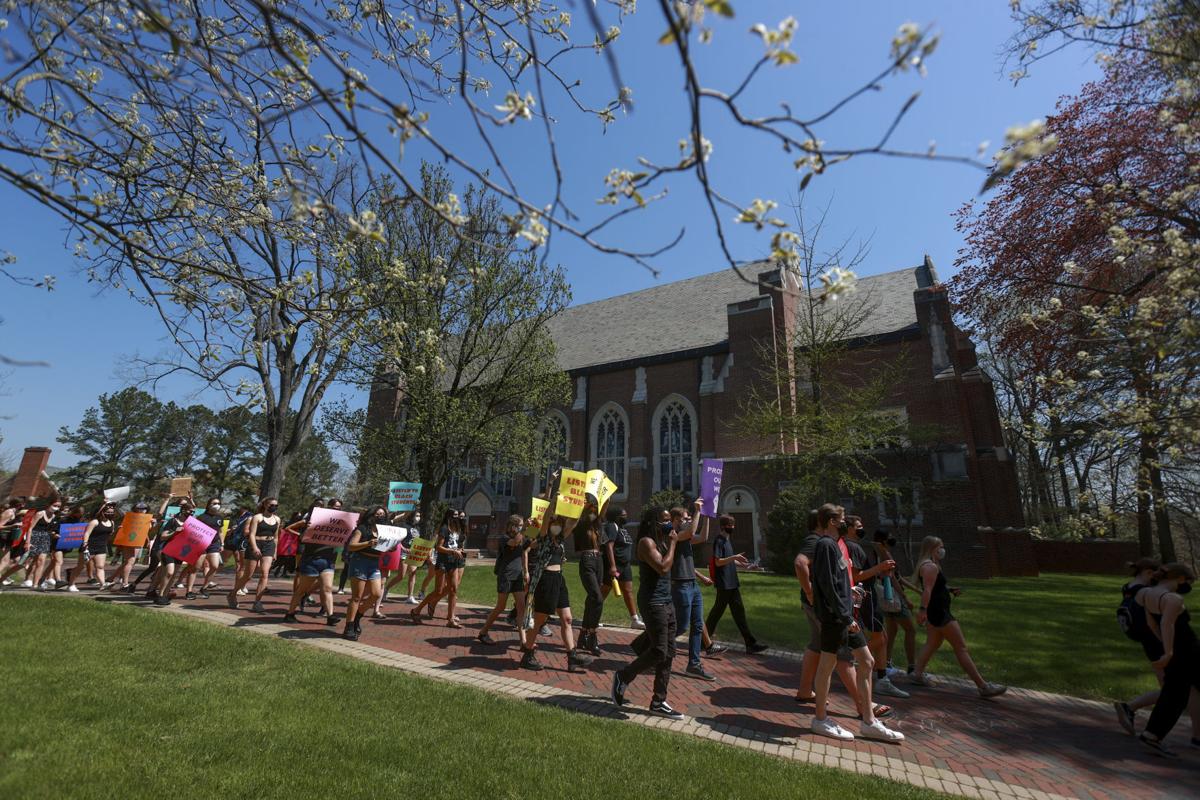 Students and faculty gathered for a march Wednesday, April 7, 2021, at the University of Richmond. They were protesting the school’s lack of action in changing the names of two campus buildings associated with slavery and segregation. 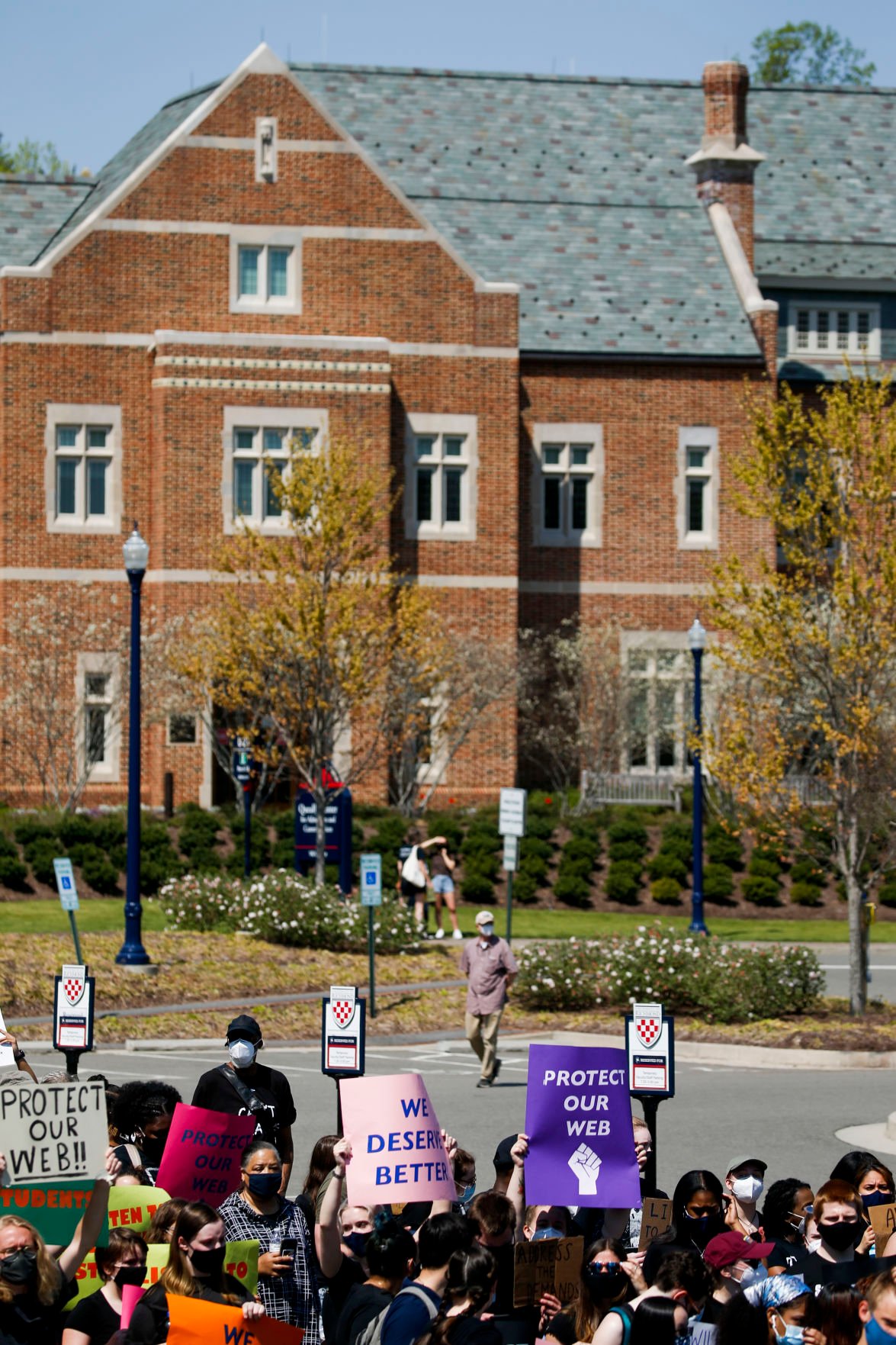 Students and faculty gathered at UR last week to protest names on campus buildings that are associated with slavery and segregation. 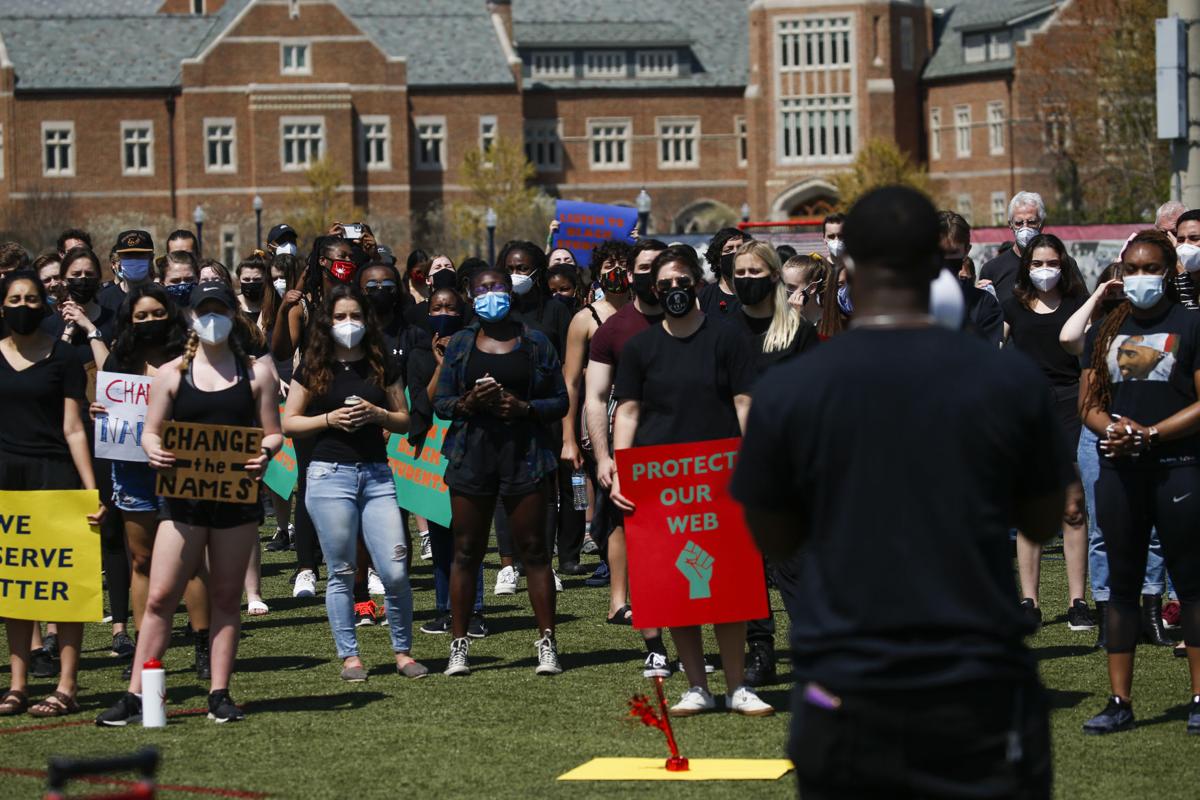