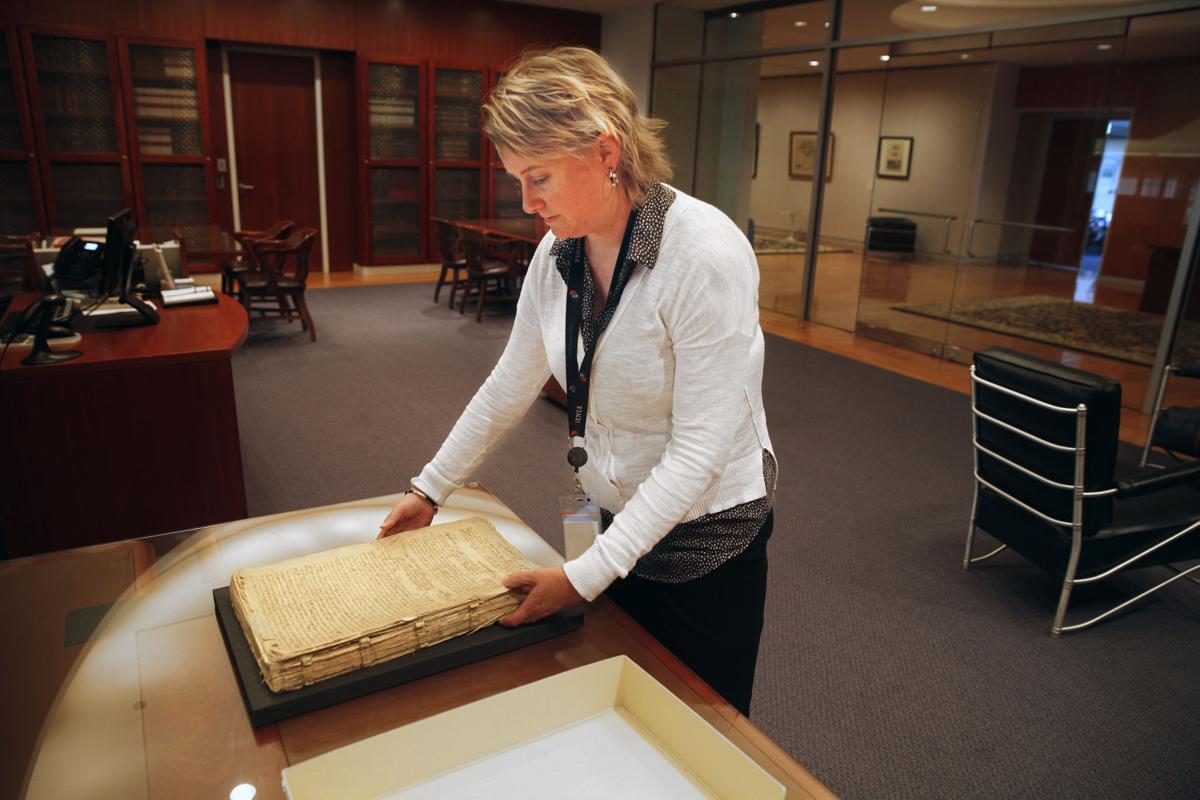 Audrey McElhinney, senior rare book librarian for the Library of Virginia, unboxes the Charles City County records that were taken by a Union soldier during the Civil War. 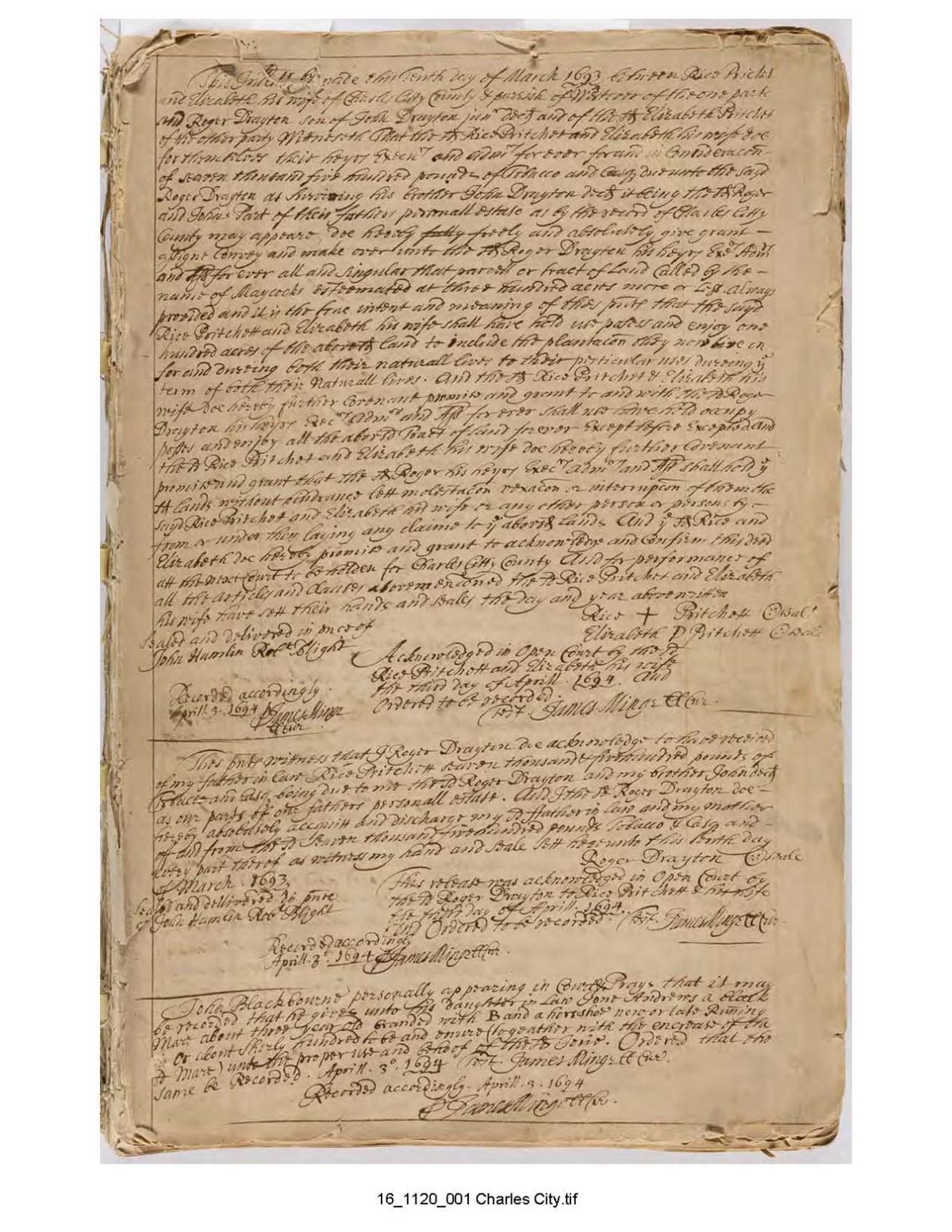 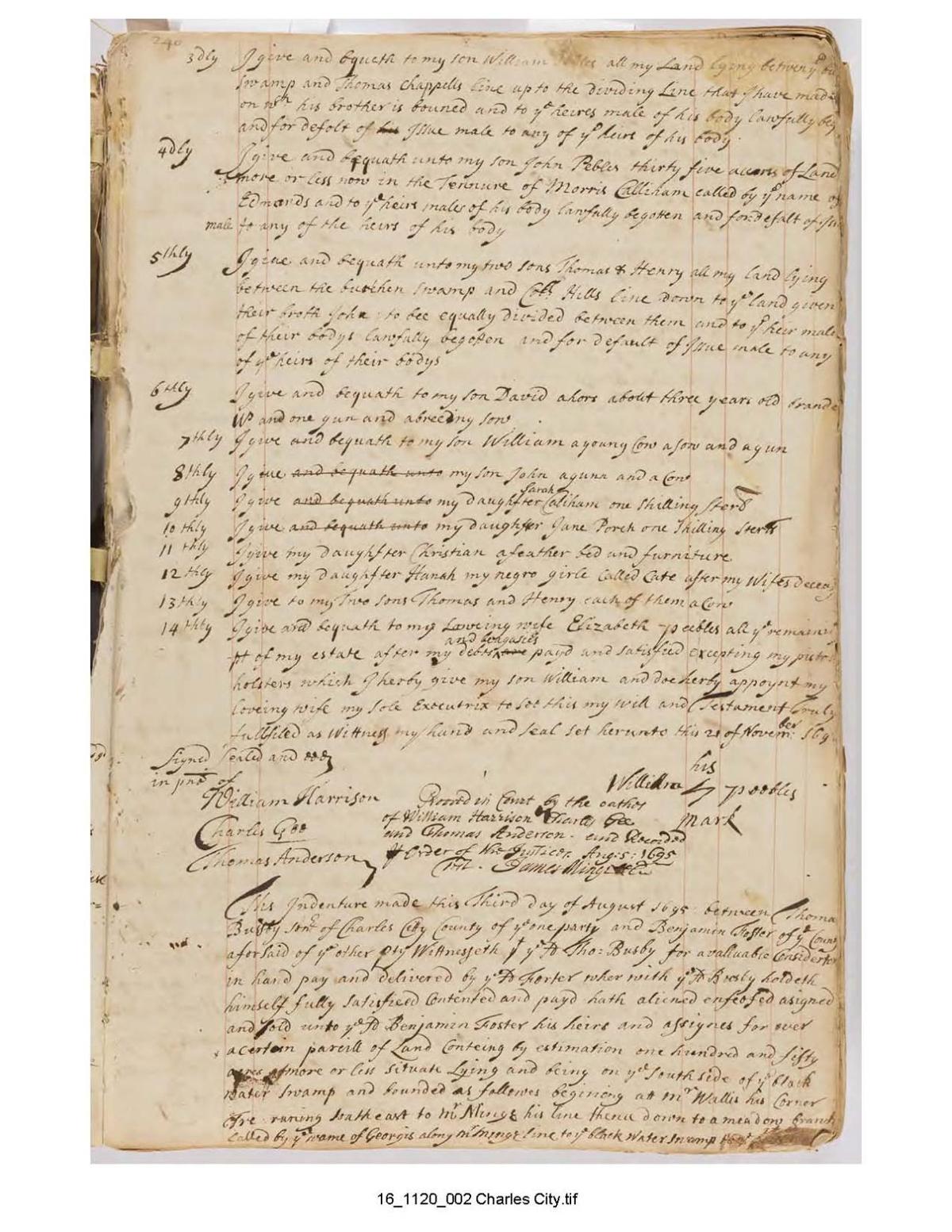 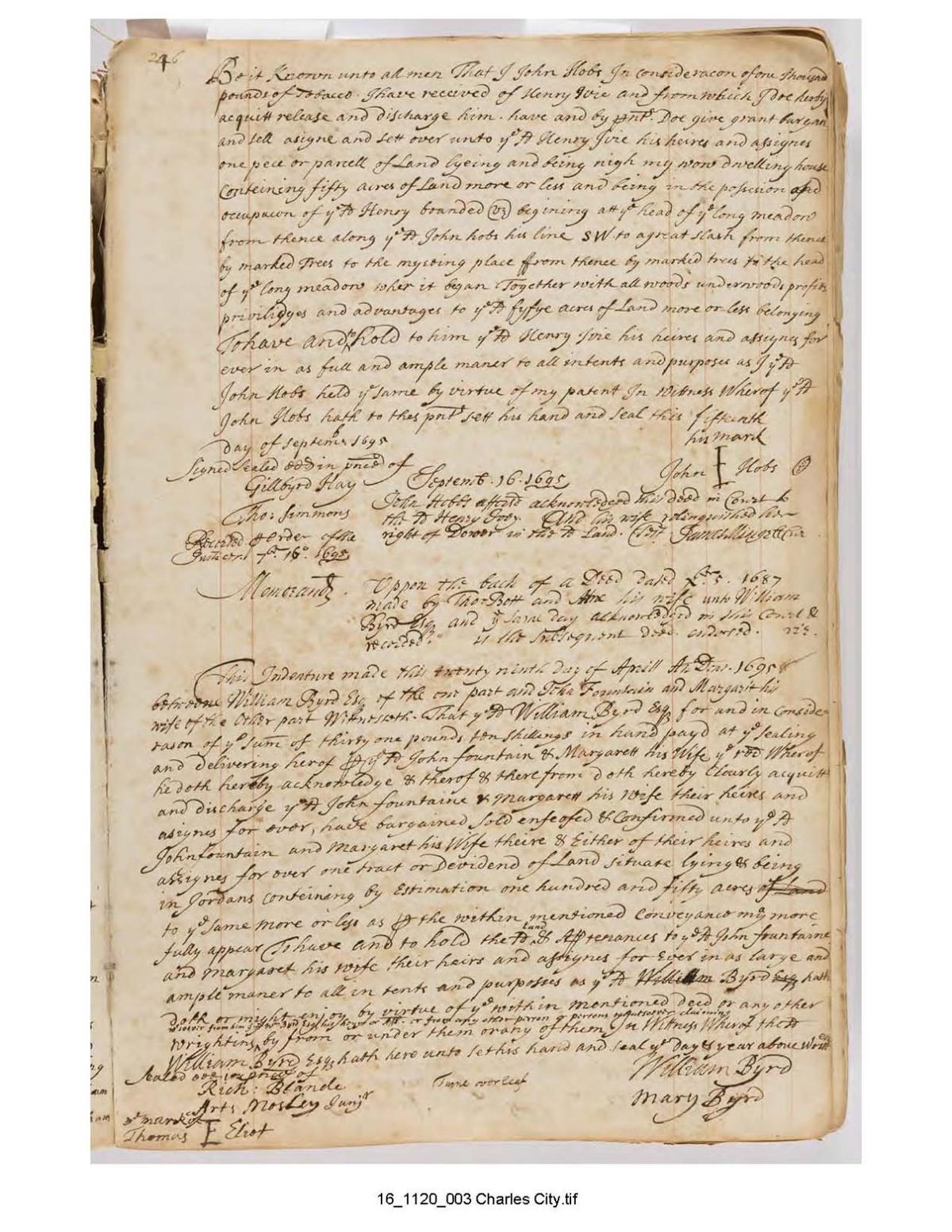 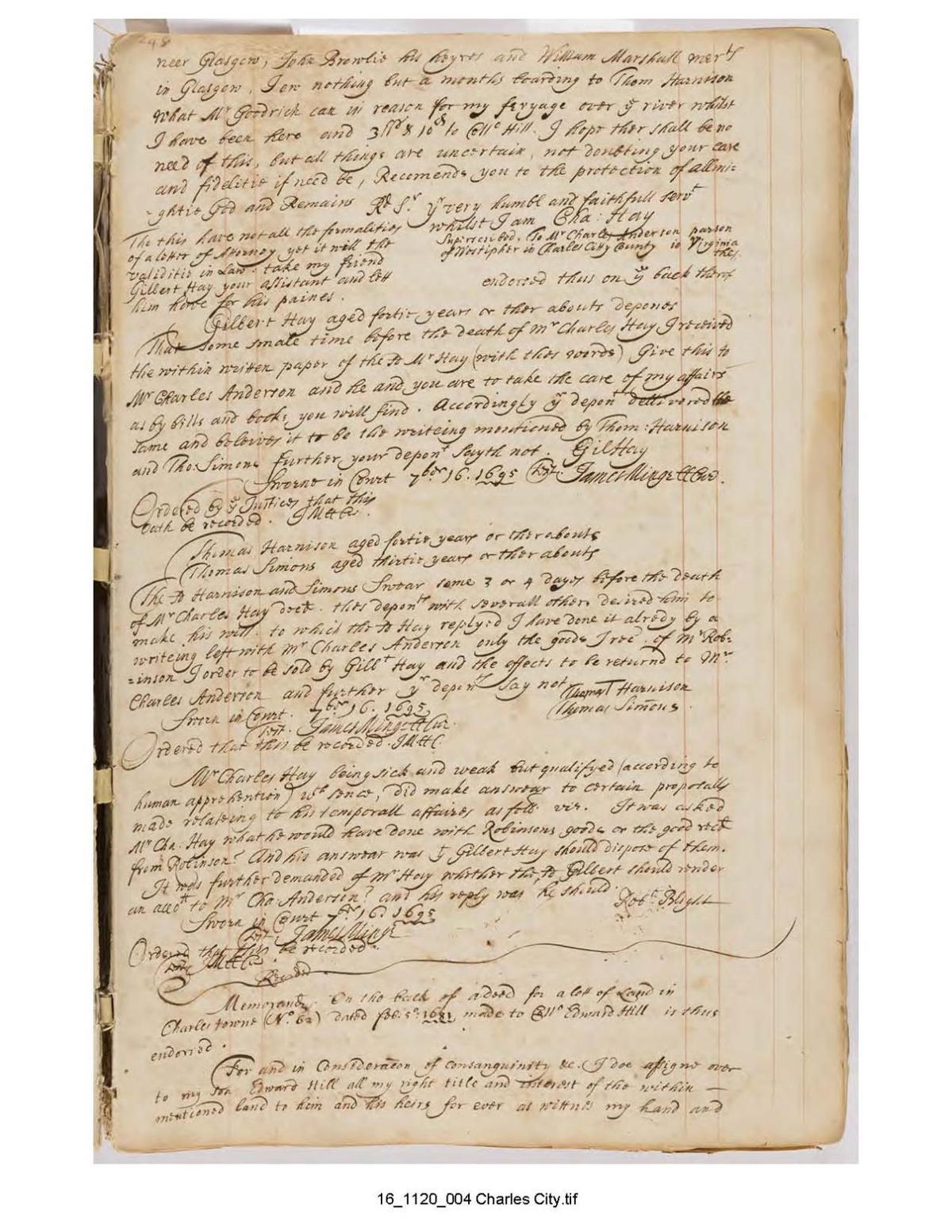 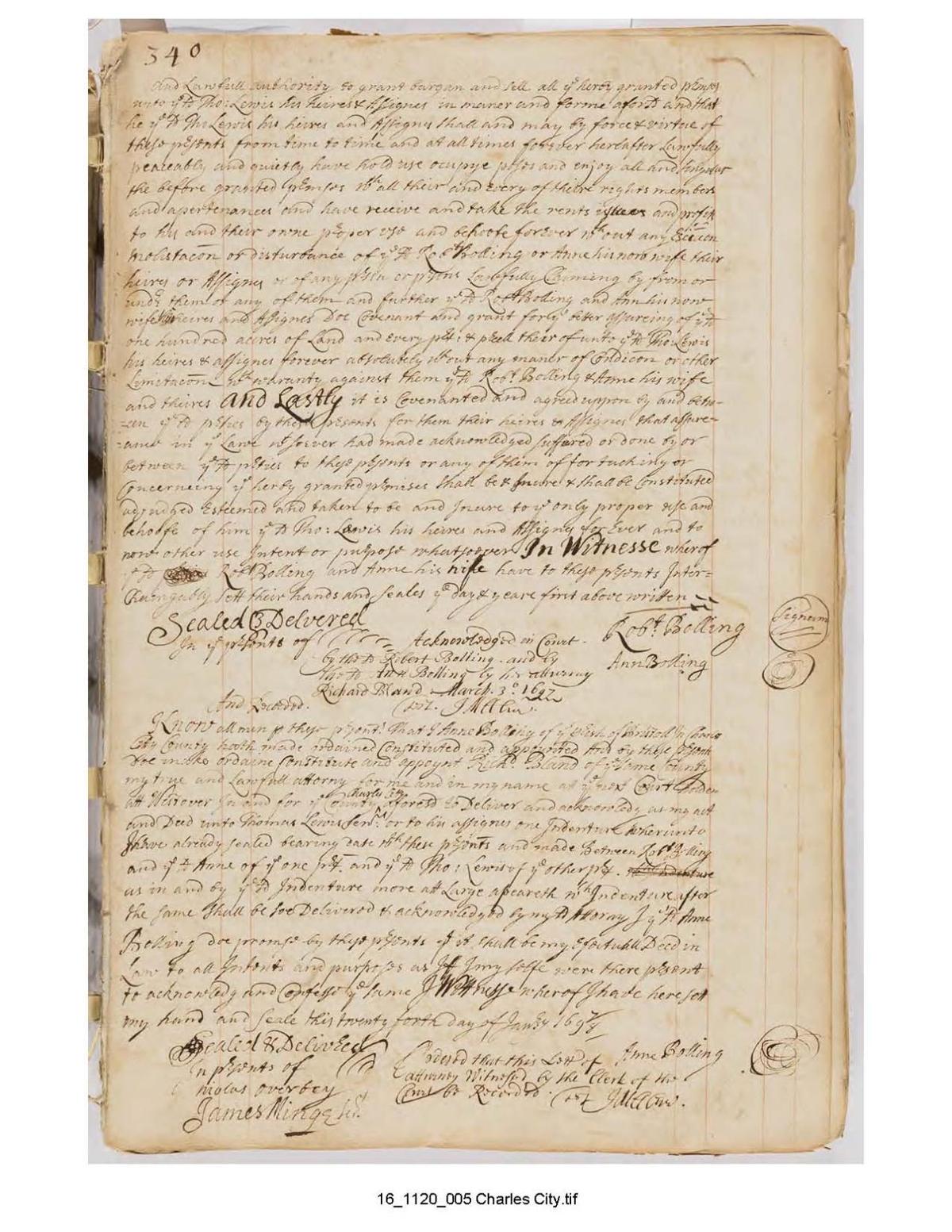 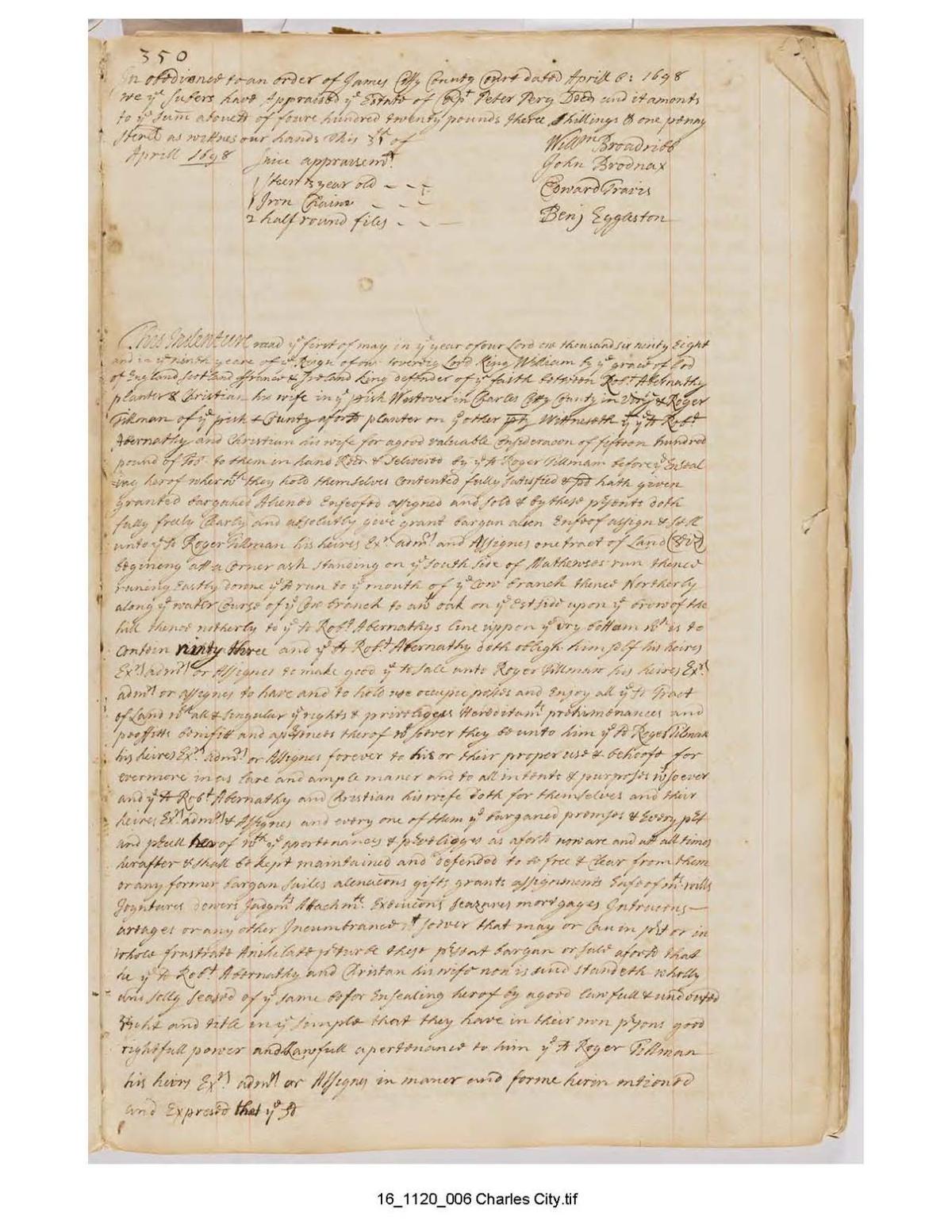 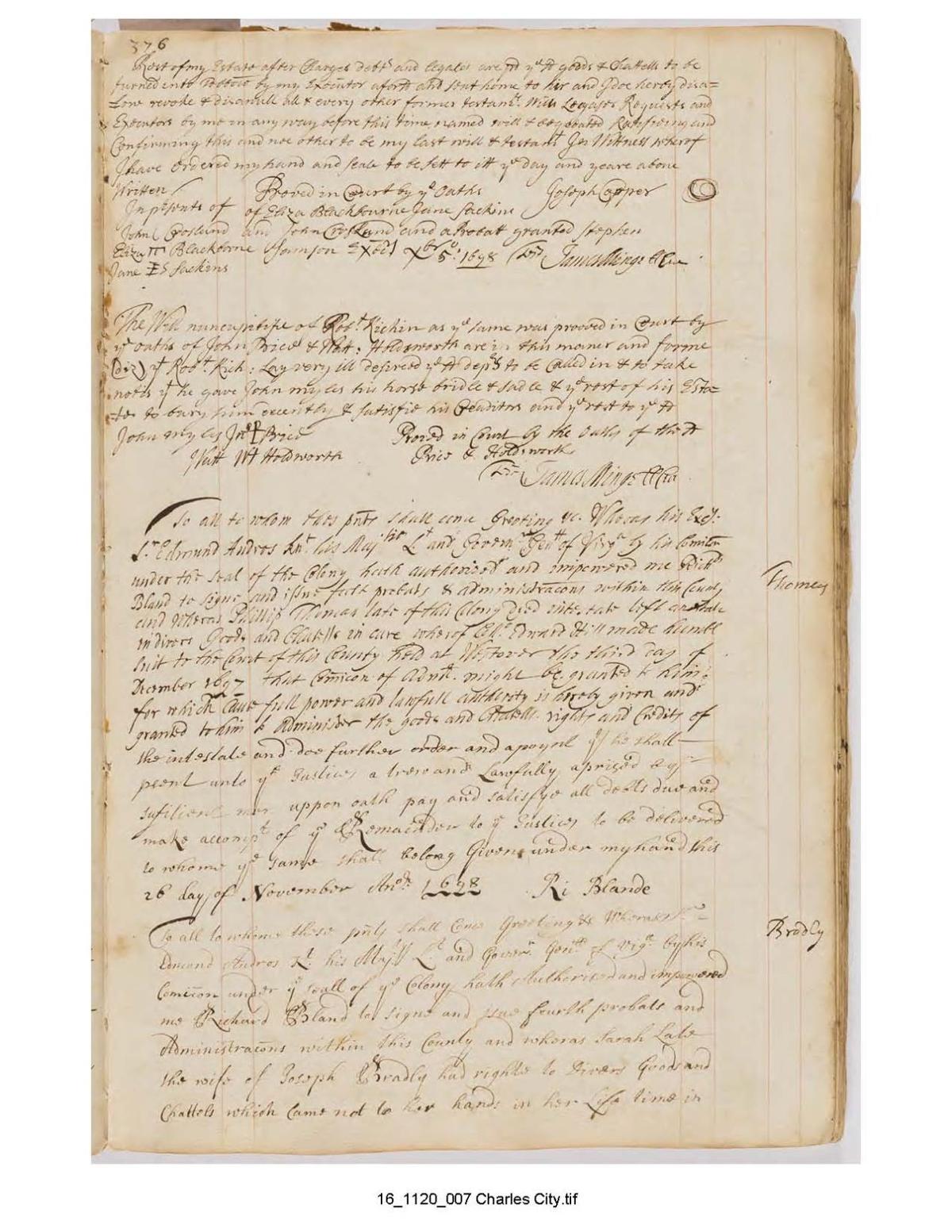 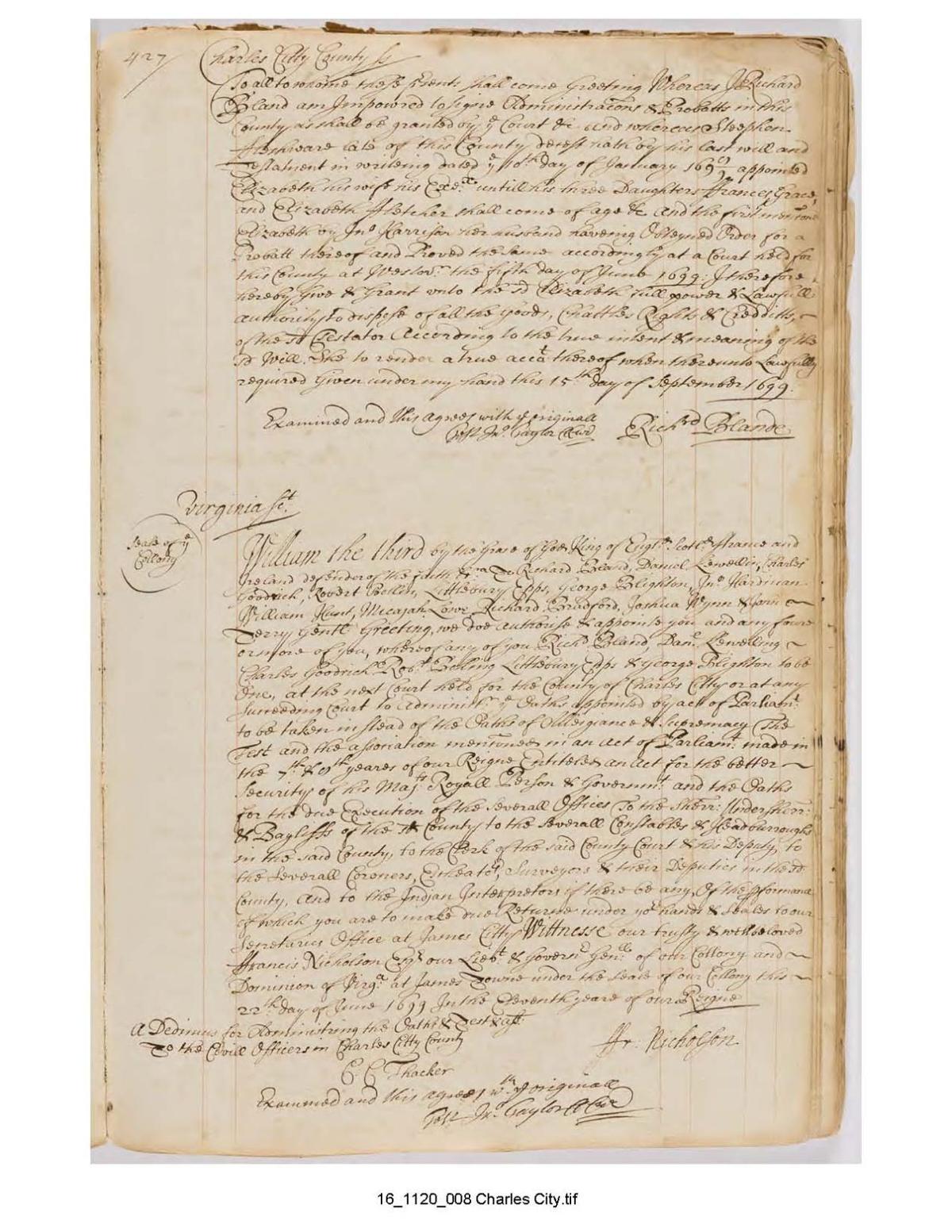 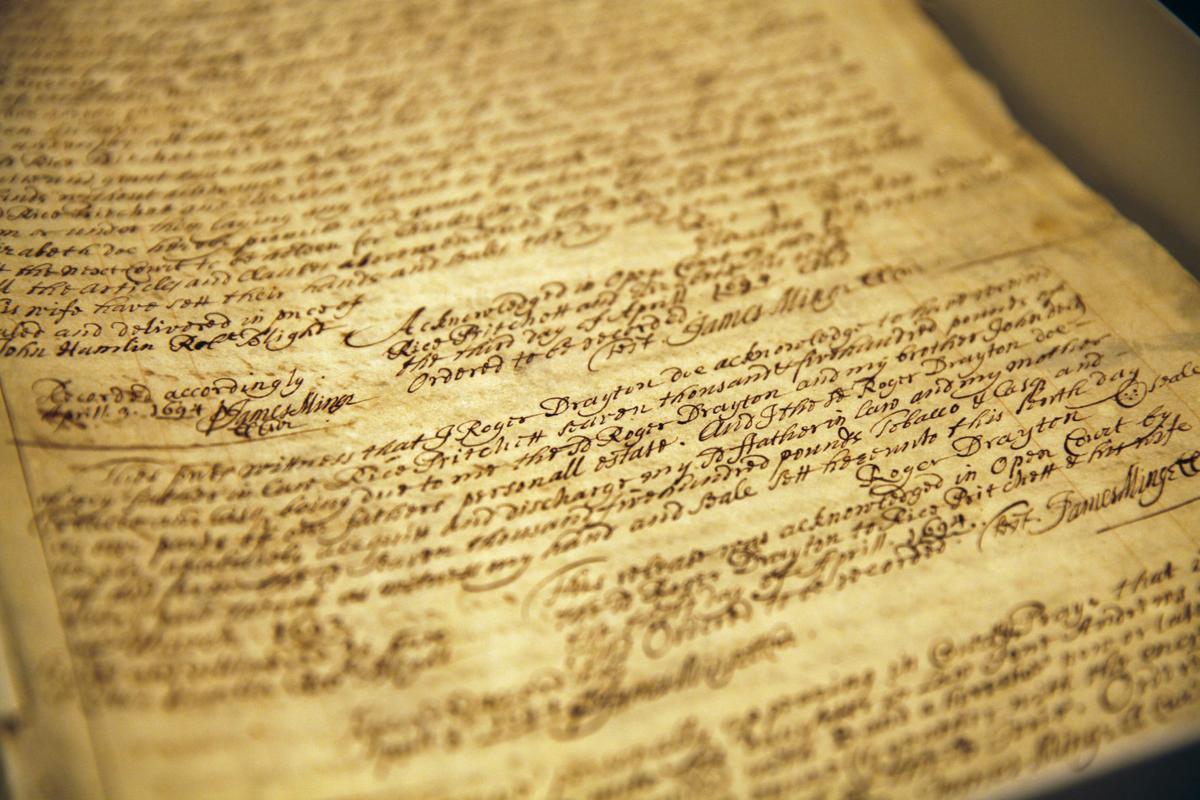 The recovered pages cover the period from 1694 through 1700. 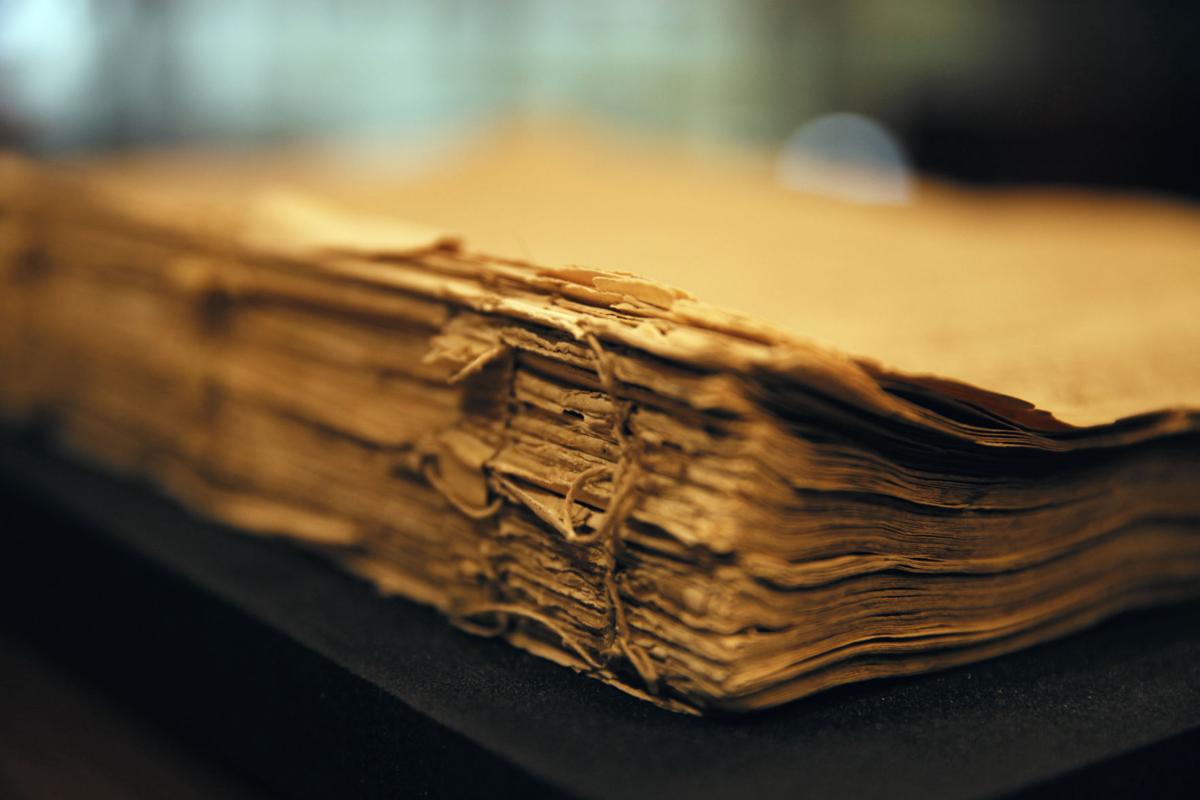 A detail view of the binding that once held the pages of Charles City County records that were taken during the Civil War.

Nearly 300 pages of Charles City County records that were pilfered by Union soldiers during the Civil War have returned to Virginia — filling in some of the blanks on wills, deeds and other court filings from the 1600s.

“It’s a godsend, an absolute godsend,” said John Metz, deputy of collections and programs at the Library of Virginia. “I’m a historian. This is the kind of thing we live for.”

“This is remarkable,” said Judith Ledbetter, historian with the Richard M. Bowman Center for Local History in Charles City. “Except for the 10 pages that the library already had of this book, it’s pretty much the earliest we have of Charles City records that would be complete deeds and wills.”

The recovered pages, numbered from 188 to 486 from a single book, cover the period from 1694 through 1700. Signatures on the laid rag paper in the book include many of the notable names in early American history, such as William Byrd, Benjamin Harrison Sr. and Capt. William Randolph.

Charles City was settled in 1613 and was one of four original boroughs created by the Great Charter delivered to Jamestown in 1618. Its records were among the oldest in the country when Union soldiers ransacked the courthouse in August 1862.

The New York Times reported on Aug. 20, 1862, that in Charles City, the records of real estate titles and other papers “have been wantonly scattered in confusion about the premises, covering the floors and dooryards, and are almost wholly destroyed. A more impressive exhibition of the destructive effects of war could scarcely be imagined, than to see those old and cherished books of record and title papers scattered to the winds or trodden under foot.”

On Aug. 15, the 154th anniversary of the day the records were carried away, local and state officials will meet at 10 a.m. in front of the old Charles City courthouse to celebrate the documents’ return.

The papers were preserved in recent decades by three generations of the Urbania family in New Jersey and Pennsylvania. The late Karl Urbania, a machinist, had bought them from an antiques dealer at some point, said Evan Urbania, his grandson.

“It was stored for so many years in a large shirt box in my father’s closet,” Evan Urbania said. Paul Urbania, Evan’s father, was a lawyer who “enjoyed reading through it and comparing it to history.”

“My dad showed it to me as a child,” Urbania said. “We figured out it was court records. At some point, we all looked at each other and said, ‘This needs to go back where it belongs.’ ”

Urbania took the records to Philadelphia, where he lives, and connected with Nathan Raab, a historical document dealer at the Raab Collection. Raab recalled the conversation starting out like many others regarding the value of a document.

“Probably within 24 hours, I had a sense that this was special and different. It had a lot of information that scholars would die to get at,” Raab said.

“The family was ready to find it the right home.” Neither the family nor Raab made any money on the donation, Raab said.

Charles City is among about 20 Virginia counties whose records were destroyed during the war, some by fire after they were sent to Richmond for safekeeping and others by marauding troops.

Thousands of Union troops were quartered in Charles City for 45 days in 1862 at the end of the Union Army’s unsuccessful Peninsula Campaign, said John Coski, historian at the American Civil War Museum.

“The irony, if you will, (is) a lot of Union soldiers were impressed with the history, to be in Virginia where the nation began,” Coski said. “For every soldier who ransacked, there was another who treated it with a certain amount of reverence.

“There were men of conscience who hated to see it happen. They tried to make sense of it and explain it away as the fortunes of war. ... ‘Such is war, and we didn’t start it.’ ”

The records will be conserved to clean and repair pages that haven’t been properly protected for more than 150 years. After that, they will be scanned to make them available to the public and research community, probably by December, said Metz, with the Library of Virginia.

Edward Mitchell of Charles City is already planning to look for some answers about his ancestral home. It has been owned continuously by Katherine Banks Royall Isham and her descendants for 375 years but has taken some unexplained detours from one side of the family to the other.

“How did Joseph (Royall) Jr. get the property back from his Isham half-sisters? Was it given to him by the sisters? Did he buy it? Or maybe they left it in their respective wills?” Mitchell said in an email.

The answers should be easy to read, if they’re in the section that was recovered. The pages are in great condition, considering what they’ve been through, said Vince Brooks, senior local records archivist at the Library of Virginia.

“I’ve seen many in the courthouse that were properly stored that look worse,” Brooks said.

A copy of the digitized records will go to the Urbania family.

“It’s through the good grace and generosity of people like the Urbania family, and through the incredible good nature and good will of Nathan Raab and his company,” that items like these pilfered records “make their way back to where they belong,” Metz said.

“We’re hoping a story like this gets people to look at what they’ve got and make sure these items make their way back to the right home, where a larger group of people can benefit from them.”

Where: In front of the old courthouse, 10702 Courthouse Road, Charles City

Building collapses into floodwaters in China

Astronaut captures the 'Southern Lights' aboard the ISS

Astronaut captures the 'Southern Lights' aboard the ISS

Audrey McElhinney, senior rare book librarian for the Library of Virginia, unboxes the Charles City County records that were taken by a Union soldier during the Civil War.

The recovered pages cover the period from 1694 through 1700.

A detail view of the binding that once held the pages of Charles City County records that were taken during the Civil War.