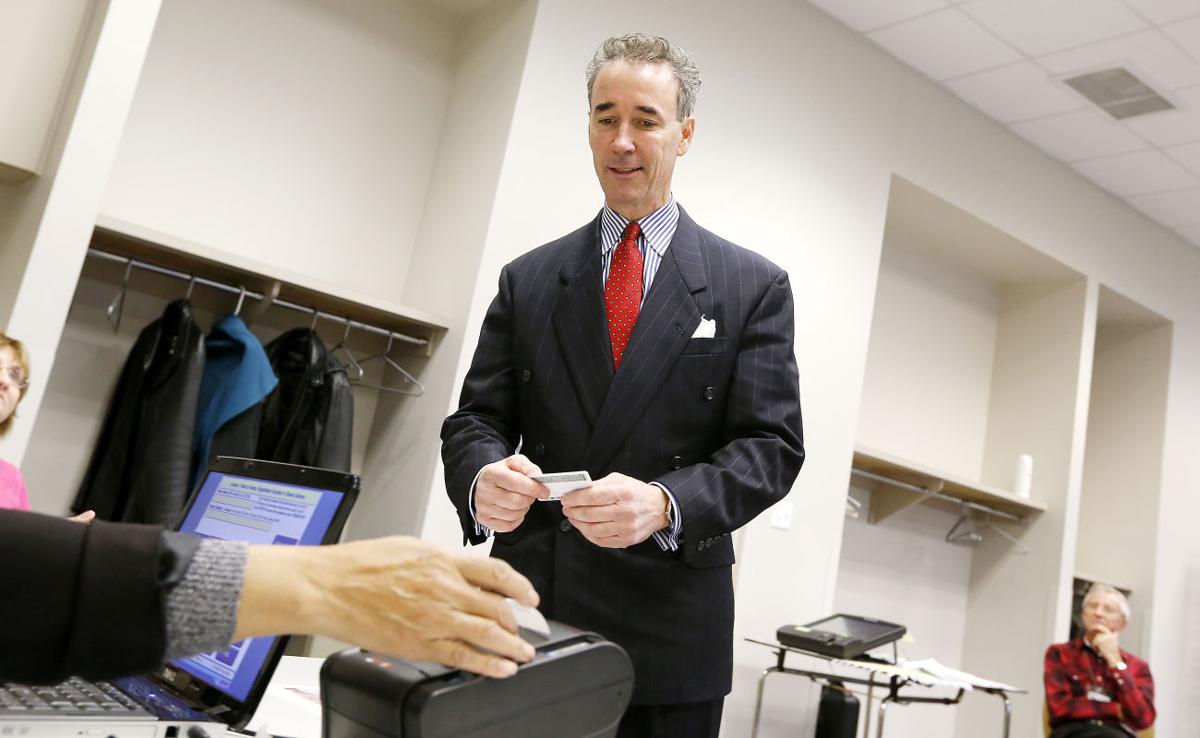 Joe Morrissey checks in to cast his vote at the North Park Library in Henrico County VA for the 74th District Tues. Jan. 13, 2015. 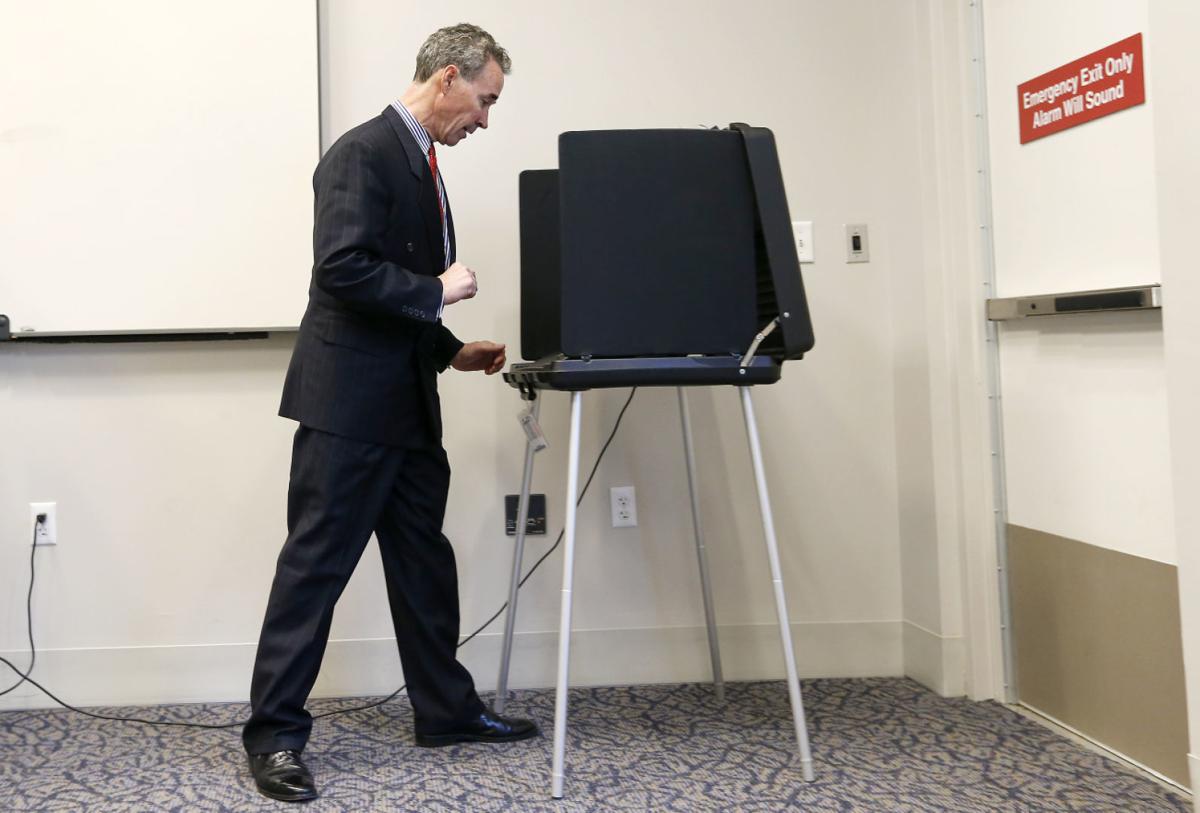 Del. Joseph D. Morrissey on Tuesday won a special election to keep his seat in the 74th House of Delegates district, making him the first jailed lawmaker in modern Virginia history to win reelection.

On the eve of the General Assembly session, Speaker of the House William J. Howell, R-Stafford and House Democratic leaders said they still find Morrissey's conduct unacceptable and will explore all options to oust him from the legislature.

Morrissey, the Democrat-turned-independent, defeated Democrat Kevin Sullivan and Republican Matt Walton in spite of Morrissey's ongoing legal woes and controversy over his conviction for contributing to the delinquency of a minor.

With all 33 precincts reporting, Morrissey had 42.26 percent of the tally, to Sullivan's 33.37 percent, according to the Virginia Department of Elections. Walton trailed with 24.13 percent of the vote.

Morrissey, who did not issue a statement after his victory, learned the results from behind bars at the Henrico County Jail East, where he has access to a pay phone and a television in the group room.

The lawmaker was sentenced in December to six months in jail after entering an Alford plea to a misdemeanor charge of contributing to the delinquency of a minor. He was allowed to campaign at daytime under a work release order, but had to report back to jail by 8 p.m. Tuesday, said Henrico County Sheriff Mike Wade.

Morrissey arrived at the jail seven minutes after his curfew, but Wade said there will be no consequences. “We’ve never taken anybody off of work release for being seven minutes late,” he said.

“This is a victory for the ages,” said Stephen J. Farnsworth, a professor for political science at the University of Mary Washington.

“Rarely has a politician with as many problems emerged victorious. For a man who has more baggage than Amtrak to win speaks volumes for his ability to connect with the district despite all of his liabilities.”

About 53,000 registered voters live in the majority-minority district that includes parts of Richmond, Henrico County and all of Charles City County. A total of 6,720 cast ballots in the special election.

Read a collection of Times-Dispatch coverage of the lawmaker-legislator from throughout his colorful career.

December 20, 1991: Richmond Commonwealth's Attorney Joseph D. Morrissey and lawyer David P. Baugh, two of the area's most combative, irreverent and high-profile courtroom personalities, were ruled in contempt of court yesterday after coming to blows in the middle of a drug trial.

From the archive: Prosecutor relishes life in limelight

December 22, 1991: In his 23 months in office, Joe Morrissey, the 34-year-old commonwealth's attorney, has become as much a personality as a prosecutor. "The Fonz, with curly hair," chortles Corey Dietz of WRVQ-FM's "Q Morning Zoo."

From the archive: Morrissey, Baugh get 5-day sentences; they apologize, but only to judge

From the archive: Morrissey convicted of lesser charge; lawyer fined $2,500 in assault on worker

October 8, 1999: The verdict in the aggravated malicious wounding trial of Richmond lawyer Joseph D. Morrissey was the only possible one with something for both sides: guilty of the lesser charge of misdemeanor assault and battery and a fine of $2,500.

From the archive: Morrissey makes plea for license; tells board he has changed

April 23, 2011: Del. Joseph D. Morrissey, D-Henrico, a former lawyer and Richmond commonwealth's attorney, took his case to win back his law license to a Virginia State Bar disciplinary board Friday.

June 15, 2012: Del. Joseph D. Morrissey and Paul Goldman are hanging out a shingle. Two of the most colorful fixtures in city and state politics say they are opening the Morrissey & Goldman LLC law practice in Highland Springs to "help give working families a fighting chance."

Morrissey has represented the district in the House of Delegates since 2007. He won four times prior to Tuesday's victory, each time with more than 70 percent of the vote.

But Morrissey’s fifth victory may be short lived, Farnsworth said. “There will be a significant interest in expelling him from the legislature, and that interest will not disappear in the wake of this victory,” he said.

Howell made that clear.

"Mr. Morrissey's election tonight does not change the fact that his actions fall grievously short of the standards of a public servant in the House of Delegates," he said.

"As speaker, I have an obligation to faithfully and impartially discharge my duties as presiding officer and a responsibility to protect the honor and integrity of the House of Delegates as an institution.

"There are a number of options available to the body to address questions of conduct regarding its members. These options are set out in the Constitution of Virginia and the rules of the House. Working with House Minority Leader David Toscano and other members of the House, we will begin the process of assessing these options in order to determine the appropriate path forward."

"His conviction and actions over the past two months were reprehensible, and we will be exploring every avenue in regard to his status as a member of the House of Delegates."

House leaders from both parties had previously vowed to seek Morrissey’s expulsion should he get reelected. But unless there is doubt that the election was properly administered, Morrissey will be sworn in today and take his seat before expulsion proceedings could begin.

Under House rules, a member can be expelled by a two-thirds majority for “disorderly conduct,” which is not defined further. The House Privileges and Elections Committee would have to investigate the matter and make a recommendation before the House could vote.

Democrat Sullivan, an ex-union official, said in a statement: "While we're disappointed with the results I'm very proud of the campaign we put together in such a short time frame.

"We met tons of voters who are dissatisfied in their representation and ready for effective leadership in the state house. I look forward to continuing my work on improving the lives of working class families."

Walton, the Republican, declined to comment on Morrissey’s victory, but said he wished the results were different.

“I am proud of the campaign that I ran and that I got to focus on the issues,” he said, adding that he appreciated those who supported him and his campaign.

Walton, a teacher at Glen Allen High School, did not say if he plans on running again in November. “Right now, my focus is getting my students ready for their exams next week and building the future for Henrico,” he said.

Police allege that documents entered during Joseph D. Morrissey's sentencing fraudulently claimed that the father of the 17-year-old who worked in the delegate's law office was liable for support payments.

Following widespread calls for his resignation after his conviction,  Morrissey in December had agreed to step down effective Tuesday. But his announcement that he would run for his seat again, as an independent candidate, angered Republicans and Democrats in the state legislature.

Howell called it a “despicable, arrogant political stunt that should disgust each and every citizen.”

But Morrissey maintained that he did what he was asked to do by relinquishing his seat. He said it was his right to run again and that voters, not politicians, should decide whether they want him to continue to represent the district.

Morrissey’s legal trouble, which has given him nearly non-stop media coverage since his conviction, spilled over into the last 24 hours before the election. An outraged Morrissey on Monday accused police of sabotaging his election chances after several Henrico County Police investigators had executed a late-day search warrant at his Highland Springs law office.

Documents made public in Henrico Circuit Court show that Morrissey's law office and that of another lawyer were both searched in connection with allegedly fraudulent documents that were made part of the record Morrissey’s case.

The matter relates to support payments that were allegedly demanded of Coleman Pride, the father of the then 17-year old receptionist in Morrissey's law office with whom Morrissey is alleged to have had a sexual relationship.

The lawmaker had faced in excess of 40 years in prison if convicted on multiple counts issued by a special grand jury but instead entered an Alford plea Dec.12 to a misdemeanor and was sentenced to six months in jail. An Alford plea does not admit guilt but acknowledges there is evidence sufficient for a conviction.

Pride also played a central role in the election, when Democrat Sullivan last week released a one-minute radio ad with Pride saying that Morrissey does “not belong in any public office” and should “not be making decisions for our family, because next time it could be your daughter or even your granddaughter.”

And Sullivan sent a mailer to hundreds of households in the district with the Pride’s picture, name and his claim that when Morrissey “took advantage of my teenage daughter, he violated our trust and yours.”

Del. Joseph D. Morrissey’s re-election to the House of Delegates by a wide margin has created a dilemma for House Democrats, who are grappling with how to punish their former colleague without thwarting the will of the district’s voters.

Jailed lawmaker Joseph D. Morrissey on Wednesday voted against a House measure that would keep pornographic material out of the hands of inmates.

WHY YOU KNOW HIM: Often controversial, Richmond-area politician Morrissey drew more attention than usual at the beginning of the year, when he…

Joe Morrissey checks in to cast his vote at the North Park Library in Henrico County VA for the 74th District Tues. Jan. 13, 2015.