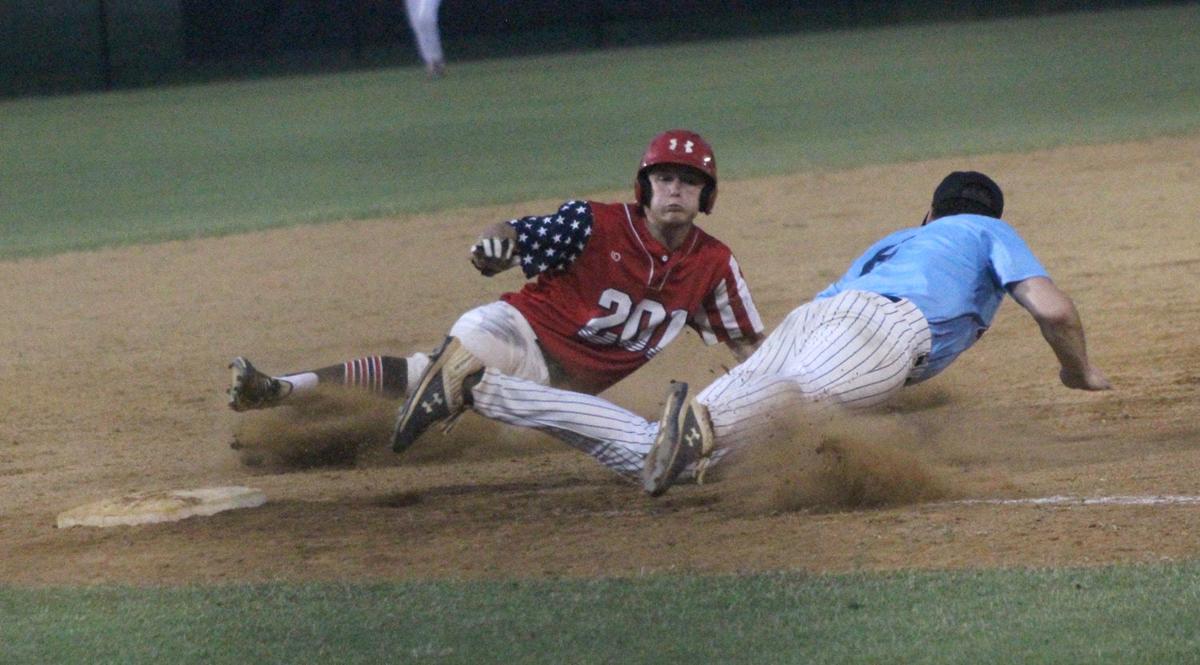 Alex Balisteri slides across third base to extend his bases-clearing hit into a triple in his Post 201 Seniors team's first game of the summer on Tuesday, July 7, 2020. The visiting team, Post 125, defeated Post 201, 11-9. 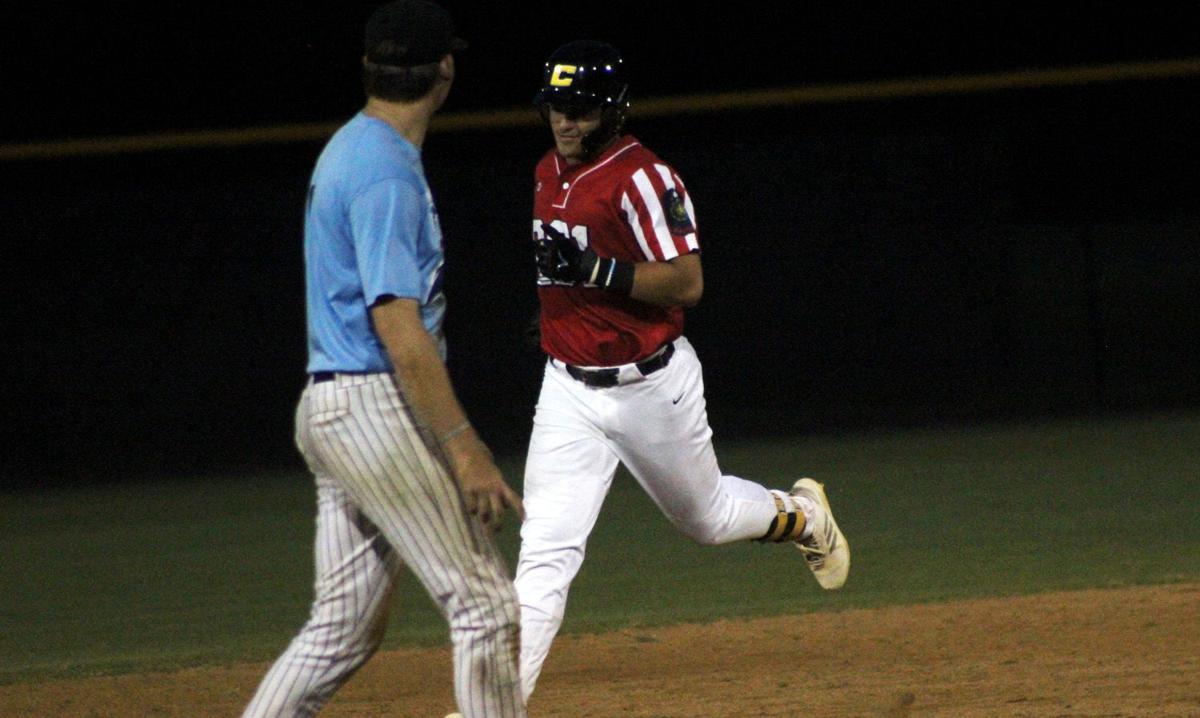 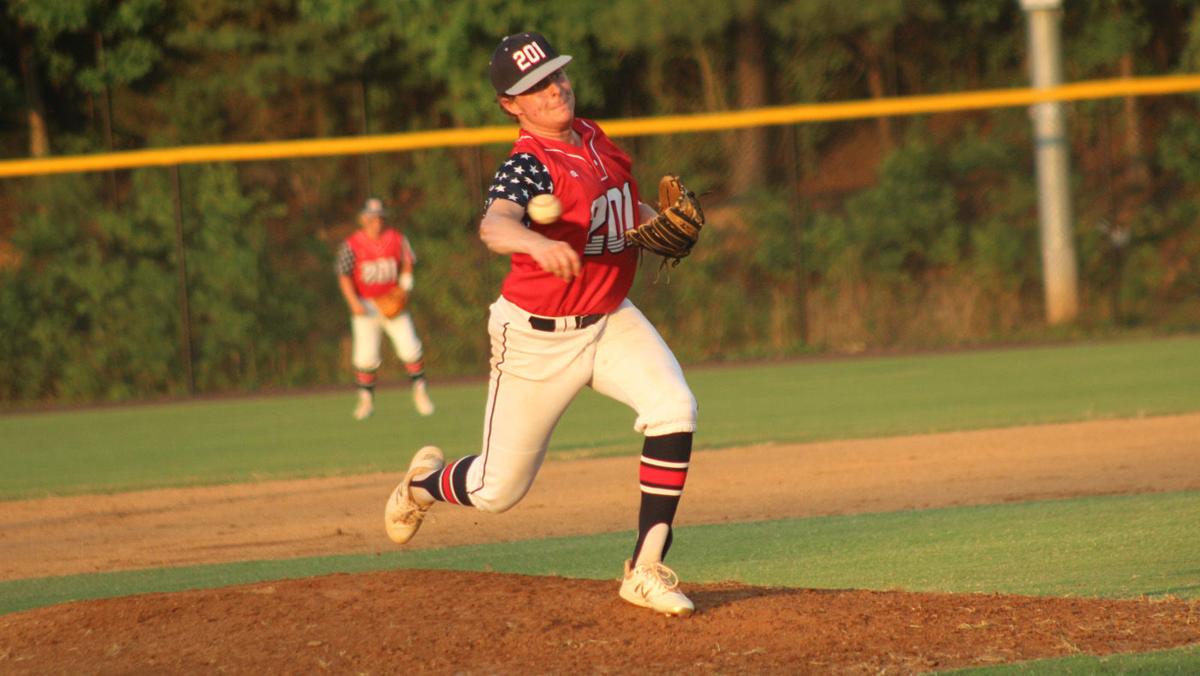 Goochland High School Class of 2020 alum Cole Bashinski throws a pitch in the Post 201 Seniors' first game of the summer on Tuesday, July 7, 2020.

To keep his swing sharp, the future North Carolina Tar Heel and 2020 Powhatan High School graduate had been lifting pretty much every day and going out to the field to get in batting reps on a daily basis.

His efforts more than showed on Tuesday.

Seeing a fastball with two runners on base and two outs in the books, Eike smashed the pitch into a towering trajectory across left-center field and on past the fence.

His tiebreaking three-run homer lifted his team, sponsored by Powhatan-based American Legion Post 201, into a 9-6 lead. But the visitors from Post 125, aided by errors from the home team, surged across the next two innings to tie it back up, and then Scott McDonough launched a go-ahead solo homer in the top of the seventh.

But no matter the score, for both teams, playing the game itself was a triumph.

Tuesday's game was the first of any kind for the players since the COVID-19 pandemic led to the cancellation of Virginia's spring sports seasons.

For Midlothian’s Christian Chambers, getting to play on the baseball field again was a blast.

“It kind of made you want to play baseball even more, just taking a break from it, see how much you missed the game,” said Chambers, who after this summer will attend and play baseball for JMU. “It’s awesome to be out there again.”

When Post 201’s Alex Kyte threw the first pitch of the game, his teammates in the dugout clapped. Cheering could be heard.

“It’s great – we’re out here with the boys, having a good time, having fun,” said Eike, who led the team with four RBI on Tuesday. “Just glad to be back.”

“It makes you realize how much you miss the little things, like just talking to everybody in the dugout,” said Balisteri, who had two extra-base hits, including a double and a three-run triple, and scored two runs.

The homer hammered by Eike in the bottom of the fourth inning capped a six-run rally that saw the Post 201 Seniors climb out of a 6-3 hole. They scored all six runs while facing two outs.

Before Eike, Balisteri slammed a game-tying bases-clearing rocket to the center field fence, then kicked up clouds of dirt on the slide across third base as he beat the attempted throwout to extend his explosive at-bat into a triple.

But in addition to stringing together five unanswered runs, Post 125's defense delivered two 6-4-3 double plays in the final two innings, including one to end the game. The visitors also moved several runners and scored a majority of their runs off of defensive errors, wild pitches, hits by pitches and walks.

After the game, Mead emphasized the importance of throwing strikes to his players.

On top of dealing with the summer heat and humidity, pitchers and hitters are coming in after having not been on their regular routines.

But he doesn’t think the turnaround’s going to take long.

“There’s a lot of talent in American Legion this year across the board,” he said.

And with four hits in the opening inning alone, Post 201’s offense quickly showed heavy promise for the games to come.

“I think our batting order’s really going to look good, especially as we get through a couple games,” Mead said.

Powhatan Class of 2020 grads Eike and Caleb Kersey are playing alongside fellow senior DJ Herring and several other former high school teammates, including catcher Trevor Waters, on this year's Post 201 team. They also have a few more players coming who weren’t available on Tuesday: James Nelson, a Trinity Episcopal graduate who is going to Longwood; Colby Cheatham, who attends Mary Baldwin; and last year's contributors Josh Boelt and Stone Talley.

“There’s a lot of talent out on this baseball field,” Mead said.

Waters sat down one runner trying to steal second on a throw he rifled from behind the plate in the second inning. And in addition to his homer, Eike hit a zipping grounder in the opening frame; it was a likely hit that was saved by a digging effort from Post 125 shortstop Ashwin Suresh for the out, but Eike's at-bat still plated Balisteri for Post 201's first run of the game.

Rising Powhatan junior Andrew Cheatham endured a scare in the top of the seventh when a baserunner, sprinting to first, slammed into him while he was trying to run down a popup in foul territory, sending him into a tumble.

Cheatham batted on the very next play, and he would've hit a single into right field, but in a rare sight, the second baseman, on the ground, flipped the ball from shallow right field to first base for the out. Mead said it was “just phenomenal” for Cheatham “to be able to get up to the plate after taking a hit like that and drive the ball like he did.”

Cheatham and Cameron Shields each had an RBI single in the opening inning. Shields in the fourth added a double to center field on the heels of Eike’s homer.

Post 201 will look to bounce-back this Thursday night at 7 p.m. at Powhatan High School with a home game versus Post 361’s team.

“I think, as we get into the following week, I think you’re really going to see some really good baseball all the way across the board,” Mead said.

Alex Balisteri slides across third base to extend his bases-clearing hit into a triple in his Post 201 Seniors team's first game of the summer on Tuesday, July 7, 2020. The visiting team, Post 125, defeated Post 201, 11-9.

Goochland High School Class of 2020 alum Cole Bashinski throws a pitch in the Post 201 Seniors' first game of the summer on Tuesday, July 7, 2020.