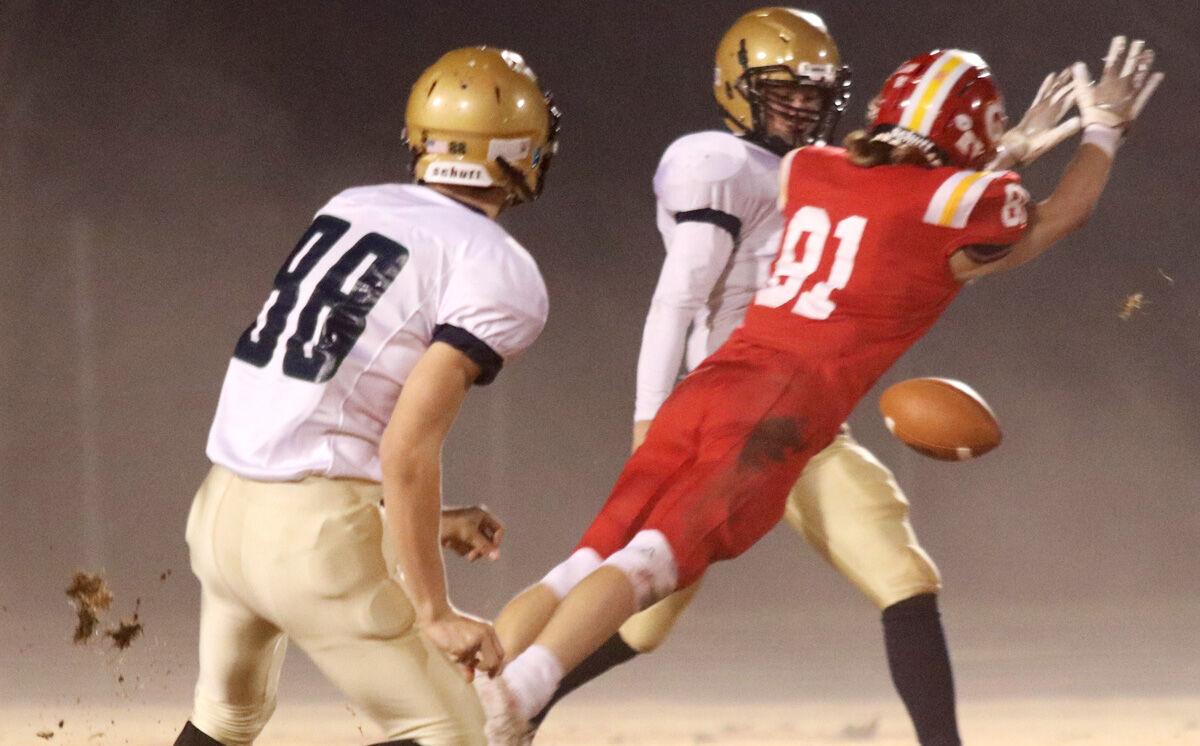 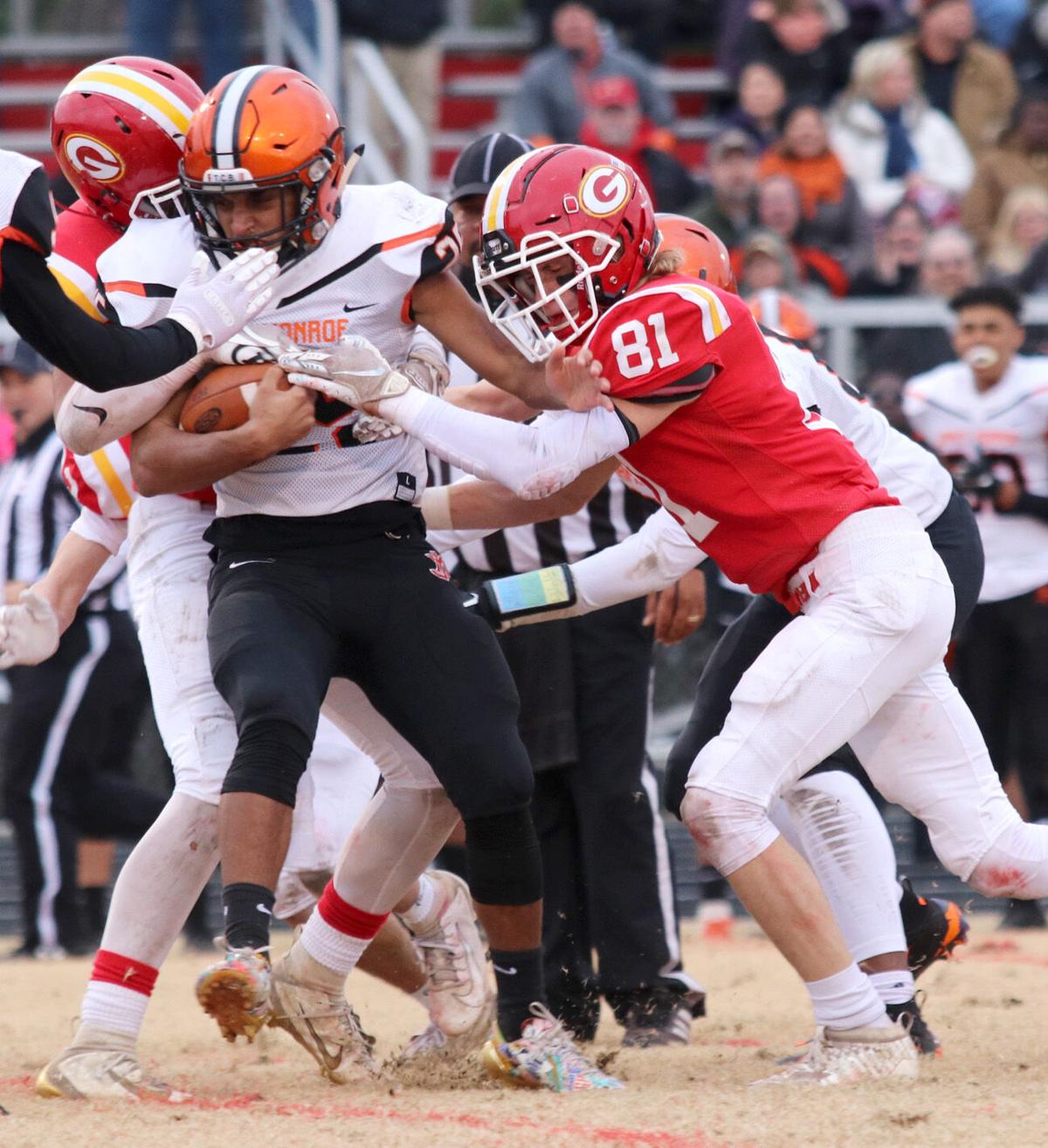 Goochland football’s Will Stratton (81) and his teammates tackle a James Monroe player in the 2019 regional title game.

It was Goochland’s second game of the 2019 season. Buckingham lined up for the field goal in the first overtime, looking to break a 7-7 tie. The ball was snapped, and the kicker ran to the ball.

His field goal attempt never had a chance.

Will Stratton came around the edge and blocked the Knights’ kick.

Goochland went on to win that game 13-7.

Blocking one kick in a season is a notable achievement.

Stratton did it seven times.

“That’s the kind of stuff you dream about,” Stratton said. “You never actually notice that it can happen until it does.”

And being able to do something like that really helped him.

“It made my life a lot better, knowing that I could do something to achieve that much of greatness,” Stratton said.

During those special teams plays, the 6-foot-2, 165-pound linebacker would normally line up on the outside – “the very outside of the last man on the line,” he said – and he would either take a step out and run under the outside of the back line, or he would take a step out and then cut back in if his opponents started to figure it out “just to keep them off-balance.”

Once he and his team saw it could happen once, they all started putting in their part, Stratton said.

“And it started happening over and over again.”

Blocking seven kicks in a season, he said, came down to continuous reps in practice.

“We are super aggressive and the boys buy into it. The fact that Will blocked all those kicks shows that 10 guys did their job for one guy to make a big-time play,” Fruth said. “But it takes a special kind of player to be willing to do that role of diving in there to block a ball exploding off the foot of a kicker. That is Will!”

Stratton’s standout efforts were among the highlights in another stellar season for the Bulldogs. They finished the 2019 season with a 12-2 record, a Class 3, Region B championship and an appearance in the Class 3 state semifinals. Stratton would go on to make the Times-Dispatch Second Team All-Metro for defense.

Stratton started with flag football when he was around 4 or 5 years old and came up playing for the Goochland Youth Athletic Association teams. Growing up, he always looked up to his older brother, Vincent Stratton Jr., who also played for the varsity team.

“I always used to sit on the sidelines with him and with his teammates,” Will said. “I fell in love with the game.”

It was around when he first got into pads – when he was able to tackle other players – that he started to see the impact he could make on the gridiron.

“When I hit somebody, it’s just like a rush that goes through my body and that makes me feel good,” he said. “I like being able to provide for a team.”

Stratton’s rare achievement on special teams wasn’t his only major contribution to Goochland football last year. He also led the way in fumble recoveries (five) and in defensive touchdowns (two). He was second on the team behind Anthony Holland in tackles made (80 total, 30 solo) and he joined teammate Kindrick Braxton in pacing the Bulldogs in tackles for loss with eight apiece. Stratton also had four sacks and added a forced fumble.

“Our coaches have always helped us, showed us the true meaning in the game and it’s all brought us together,” he said. “I feel like being on the defense, I played a big part and so did everybody else. I wouldn’t have been able to do that by myself.”

“Will is the continuation of a long line of outstanding linebackers we have had here at Goochland,” Fruth said. “Like the guys before him, you know when the whistle is blown, that Will will be at the ball.”

Fruth described how, each year, Stratton has been a spark plug for his team, making big plays at the right time.

“He just has a nose for the ball,” Fruth said. “Really looking forward to his senior year.”

As it stands, the football season is now slated to take place in the spring – nearly 15 months from when Stratton and his Goochland teammates last took the field against Hopewell on Dec. 7, 2019.

But his accomplishments from that year have motivated him a lot going into his next season.

“When you start blocking them, you just start getting a rush,” he said. “It pushes you harder, because if you can do that and achieve that, imagine what I could do my following year – maybe I get faster or I get bigger and I’m able to do more.”

It’s pushed him to build up. His main goals are to get bigger, stronger “and block a lot more punts this year” and keep working with his fellow Bulldogs as a team. He has his own weight room in his home’s basement, so he hasn’t had to worry about whether or not he’d be able to lift during the COVID-19 pandemic.

While he hasn’t yet really talked to any schools, Stratton is hoping that they’ve seen what he’s been able to do.

“Hopefully, my senior year, everything will start falling into place.”

Goochland football’s Will Stratton (81) and his teammates tackle a James Monroe player in the 2019 regional title game.