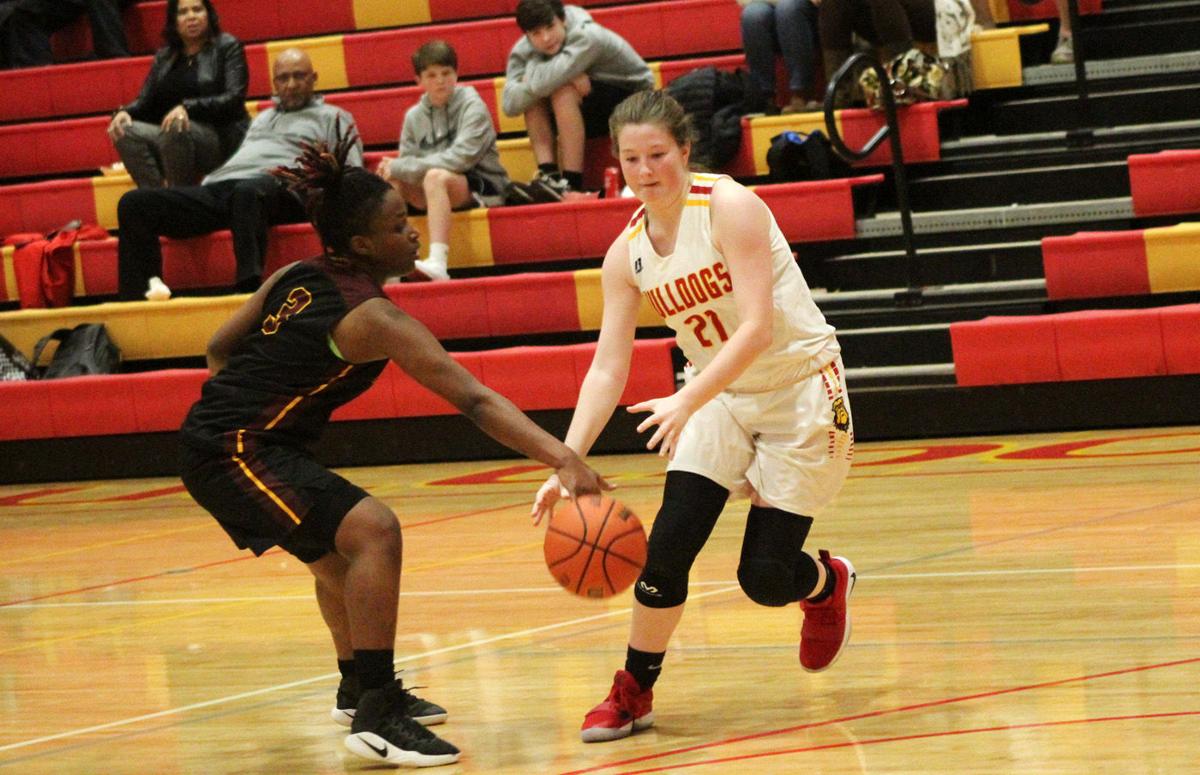 Goochland's Kenley Warren (21), seen attempting to keep possession on her drive as Nottoway's Breajha'a Adams (3) gets her hand on the ball, knocked down five jumpers, including a pair of 3-pointers, for a 14-point night in her Bulldogs' 59-49 win over Nottoway. 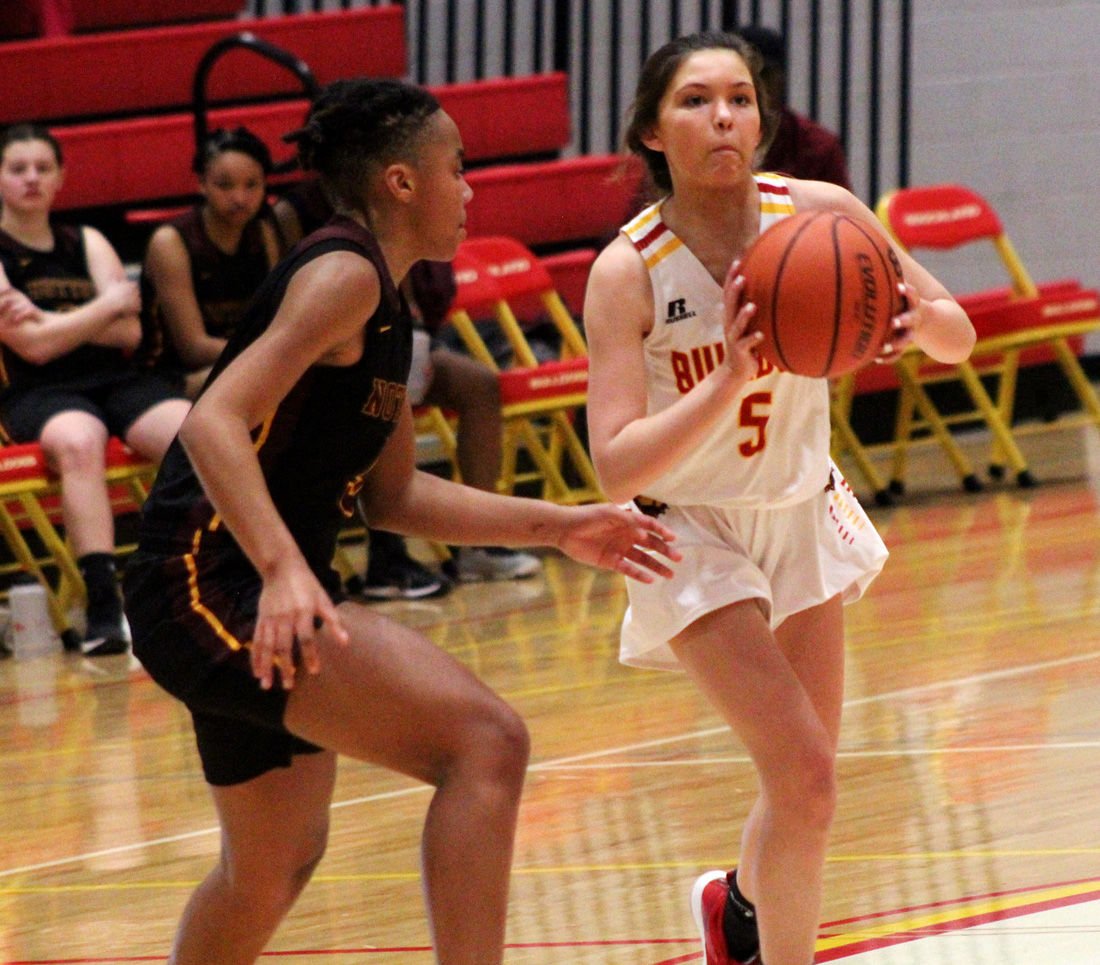 Goochland's Gabby Ragone (5) delivers a fourth-quarter pass to Kenley Warren (not pictured), who would go on to knock down the 3-pointer. Ragone led Goochland with 15 points in Monday's 59-49 win over Nottoway.

GOOCHLAND - Four quarters deep, junior Gabby Ragone was showing that she hadn't lost a step off of her hustle.

She dribbled around and on past defenders, zipped to the net on long drives with the help of her blistering pace and, in one particular second-half one-on-one matchup, snatched the ball away from her opponent around midcourt and dashed to the basket for the easy layup.

“Gabby, she’s always going to be a person that’s going to give 110 percent, even if she’s hurt or not hurt,” said Goochland head coach James Harris. “She’s that passionate about the game…she’s going to leave it all on the court.”

Ragone scored in every quarter and drained 8 of her 15 team-leading points in the fourth to help Goochland outlast Nottoway 59-49 and remain unbeaten in James River District play going into Tuesday's game.

After Nottoway poked into an early 8-7 lead with a 6-0 burst, Ragone followed up the go-ahead two-point shot off the short, aggressive drive from 6-foot-1 senior teammate Victoria Lopez by taking the ball away from the visitors, speeding down the court and drawing both the foul and the bonus free-throw attempt as she saw her layup fall through the hoop.

Ragone hit the shot from the line and ended the night by making all five of her free throws. She also got three of her assists in a 6-0 spurt that put the Bulldogs up 31-18 at the half, and joined teammates Lopez, senior Jalyn Burns and sophomore Emmy Paulin in getting the ball to a wide-open Kenley Warren, who knocked down five jumpshots for a 14-point evening.

Two of the senior’s jumpers were key 3-pointers that helped her Bulldogs keep their distance in the fourth after Nottoway slashed into their lead with a 12-0 run in the third.

The visitors had in fact battled back to make it a 3-point game late in the penultimate stanza, but Burns, receiving a teammate’s inbound pass, sent in the layup while drawing the foul, then landed the bonus point from the free-throw line. Burns knocked down 7 of her 12 game points in the second half and made four of her five free throws on Monday.

“She’s a senior, so it’s her last year, so I think...now she understands: Okay, it’s the second half of the season, I’ve got to give it all I’ve got,” Harris said of Burns. “I can trust her, she’s going to make those clutch shots.”

Lopez joined her teammates in netting double figures as she complemented her height, presence and rebounding efforts on the defensive end with 10 points on offense.

“Even when she’s not blocking shots, just being there, hands up, makes a big difference,” Harris said.

Paulin netted an early putback and added rebounds on both ends on the floor, but went out of the game due to injury with 2:44 remaining in the second quarter. The initial report was that she hurt her tailbone, but also that she went to the hospital to get the injury double-checked. Harris anticipates that she will be all right.

Goochland (11-5 overall, 11-0 in the James River District) heads into Tuesday’s 6 p.m. home game versus Prince Edward on a five-game winning streak. In order for the Bulldogs to keep that going, Harris said it’s a matter of “just putting in the hard work and just keep building from year to year.”

Goochland's Kenley Warren (21), seen attempting to keep possession on her drive as Nottoway's Breajha'a Adams (3) gets her hand on the ball, knocked down five jumpers, including a pair of 3-pointers, for a 14-point night in her Bulldogs' 59-49 win over Nottoway.

Goochland's Gabby Ragone (5) delivers a fourth-quarter pass to Kenley Warren (not pictured), who would go on to knock down the 3-pointer. Ragone led Goochland with 15 points in Monday's 59-49 win over Nottoway.