Goochland's Terry Stephenson's successes in, and longtime passion for, cowboy action shooting
0 Comments
Share this
1 of 2 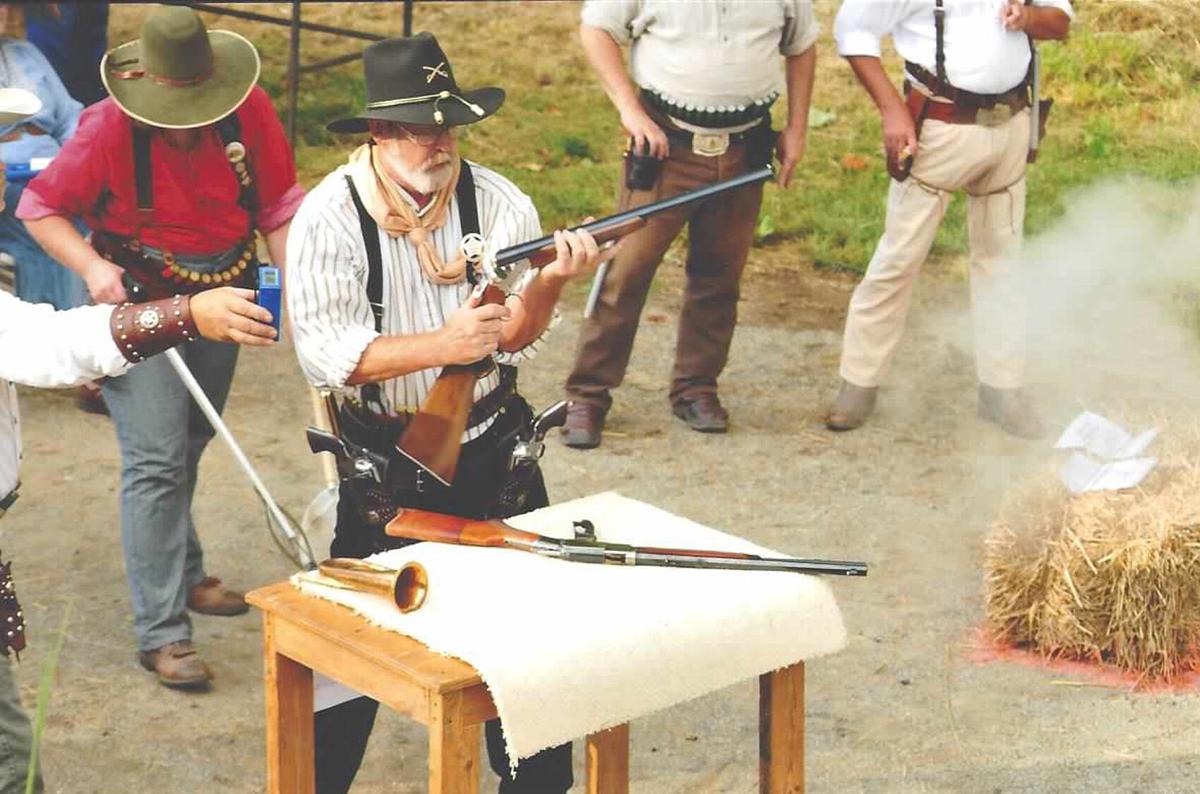 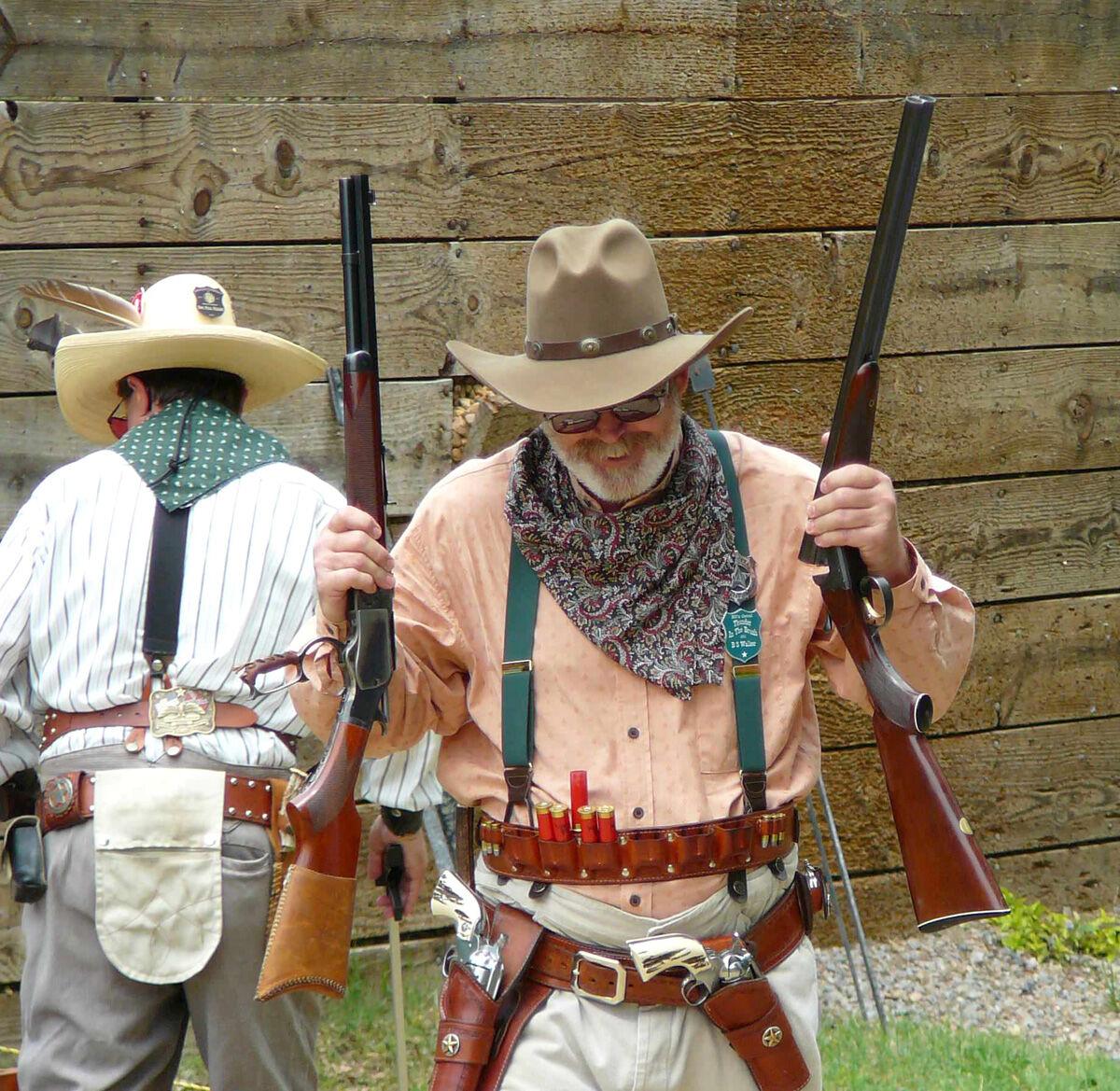 It was through a sporting show on cable television in 2009 that Terry Stephenson first heard of cowboy action shooting.

He watched the program and its featured match, and the sport appealed to him in multiple ways. He said he’d “always been a history nut,” and he grew up watching American Western series like "Gunsmoke," "Have Gun - Will Travel" and "Cheyenne."

A couple weeks later, he went in to DeGoff’s Firearms, and sitting on the counter was a card advertising Cowboy Action Shooting in Mechanicsville.

He asked the owner of the store if there was a cowboy club nearby, and the owner replied, “Oh yeah! I shoot Cowboy Action.”

The rest is history.

After he went to a couple of matches – watched the action, asked questions, started purchasing firearms – Stephenson, who goes by Major B.S. Walker in competitions, started shooting in January 2010.

The Goochland County resident is a seven-time category winner in the state black powder championship, and one time, he was the overall winner for the entire match.

Just about every match he goes to, Stephenson finishes between first and fifth. He was the overall match winner at the Mattaponi Sundowners Club this past Saturday.

But for Stephenson, the most enjoyable part of the entire sport is not the competition – it’s the camaraderie.

“When you walk in and introduce yourself, it’s like you’ve instantly just walked in to a crowd of your longtime friends!” he said. “Everybody is so nice and so friendly, you feel right at home right off the bat.”

There are several clubs across the state that feature cowboy action shooting, including the Montpelier-based Cavalier Cowboys, for which Stephenson is the match director. The clubs are affiliated with the Single Action Shooting Society (SASS) organization that oversees cowboy action shooting competitions worldwide.

A cowboy action shooting match normally consists of six different stages and lasts three to four hours, depending on the competitors and stage difficulty. In each stage, you shoot steel targets using three sets of guns, mainly replicas, from the 1860-1899 time period, and you get timed for the entire run.

You have to draw two single action revolvers from a holster, shoot five rounds each. You also pick up a western-style lever action rifle and shoot 10 rounds using the rifle. Additionally, you’ll pick up either an 1897 pump-action shotgun or a double-barrel shotgun and shoot four targets. The order in which you shoot the sets of guns can change from stage to stage.

Stephenson said the average competitor shoots 24 rounds in 35 seconds, while the faster shooters can typically move through the course in 24 seconds. In a normal match, you’ll expend 120 rifle and pistol rounds and 24 shotgun shells, he said.

They have categories for weapons like the cap and ball pistol, styles like duelist in which you shoot the gun one-handed, and age; Stephenson shoots in silver senior (age 65-69), and they allow competitors as young as 12 years old. They even have dress categories, including classic cowboy and B western, both of which have dress codes.

But with most of the other categories, you don’t necessarily have to look like a cowboy – you just have to wear attire that existed in the Old West, including jeans, long-sleeve shirts and leather shoes and boots. You’re also not required to wear a hat, but most everybody there will wear a cowboy hat.

And Stephenson and most of his fellow competitors like to dress the part. He was a brick contractor all his life, so he went to work in khakis and a tee-shirt. So when the weekend comes around, he relishes the opportunity to dress up as historical figures and archetypes – one week he’ll go as Wyatt Earp, the next he’ll go as Doc Holliday and then the next he might just go as a working cowboy.

“Most of the guys have a certain character and style,” he said. “Me, because my name is Major B.S. Walker, I lean to the military side a little more . . . but I just dress how I feel at the time.

“For me, it’s like Halloween every weekend; I can just dress up as a character,” he said, “and that makes it fun!”

All competitors also have to register an alias or cowboy name. Everyone locally, in the state and up and down the East Coast who has shot with Stephenson will call him by his cowboy name, Major B.S. Walker, even when they see him outside of matches.

Stephenson estimates he shoots with about 200 different people every month, and of those 200, he probably knows the real name of about 30 of them, and that’s because those 30 are club officers.

The world-building and fellowship go beyond the matches themselves. This weekend Stephenson is heading to Powhatan to attend the wedding of a couple whom he’s shot with, and he said they want everyone to dress in cowboy attire.

Stephenson also writes stories, poems and passages for the matches – once he featured a historical account on Kirk Douglas, another time he wrote about the Battle of the Alamo – and when the shooter is ready, instead of simply saying he or she is ready to shoot, he or she will instead say something related to the story, like “Remember the Alamo!” or “Mine Hit the Ground First” (Douglas’ quip to John Wayne in The War Wagon). Stephenson writes up and sends out the matches – including the targets and stage orders so that competitors can study them – every Monday before a weekend match.

“We try to make it playful,” he said, adding in an early-August match writeup: “What adding that story does is to cement together what our sport is really all about, a bunch of friends getting together to have fun. Having that story is showing the world that we aren’t there to stomp our competition and then strut away like the cock on the walk. It’s there to set an example that cowboy shooters as a whole are in fact a bunch of caring loving people that are there to have fun first and foremost.”

If a competitor’s gun breaks, Stephenson will lend that competitor his gun, even if his gun is faster.

“I would rather lose being beat than to win because the other guy couldn’t finish,” Stephenson said.

Between the various clubs both within the Richmond area and about an hour’s drive from the city in all directions, you can compete in cowboy action shooting every Saturday and Sunday on every weekend save for the second weekend, on which there’s not a Sunday match.

The first weekend of every month, you can shoot at Pungo Posse in Sussex County on Saturday and at Cavalier Rifle and Pistol Club in Montpelier – the closest club to everyone in Goochland – on Sunday.

You can also shoot at Pungo every second Saturday, and on the third weekend, there are competitions via K C’s Corral at Black Creek Gun Club in Mechanicsville every Saturday and via the Mattaponi Sundowners in Shacklefords near West Point every Sunday.

On the fourth weekend, the Sundowners shoot again every Saturday, and the Pepper Mill Creek Gang in King George typically shoots every Sunday, but they haven’t been shooting since the onset of the current COVID-19 pandemic.

There’s also Charlottesville’s Rivanna Ranger Company; Stephenson shoots with them on the second Saturday of every month since it is closer to where he lives near Hermitage Country Club.

As the territorial governor to four of the five clubs he shoots at, Stephenson is involved across the clubs; he promotes the sport, runs the timer and writes matches, and people ask him for information and tips on what they can do to improve their matches.

He’s had the honor of regulator bestowed upon him for going above and beyond the call of duty and putting in more work than what is normally expected.

One of the newer competitors, whom Stephenson has taken under his wing, and who has started to win against Stephenson sometimes, has commented on how impressed he was by how nice everyone is in cowboy action shooting – how they compete without being competitive, Stephenson recalled him saying.

“I’m there to compete, I want to win – I don’t argue that point; I like winning. Everybody does. But we don’t get awards for participation,” Stephenson said. “Our award is just being with likeminded people that are out having fun like you want to have.

“I look forward to seeing all my people every week,” he said, “and whether I win or lose, that’s secondary, and most other people I talk to, they’re all that way.”

To learn more about the Cavalier Cowboys, SASS and/or cowboy action shooting, how it works, how to get involved and where to find matches visit https://www.cavaliercowboys.org/ and https://sassnet.com/. The Cavalier Cowboys website has links to videos that cover a range of subjects from the history of SASS to how to get started in the sport (https://www.cavaliercowboys.org/new-shooter-information/new-shooter-info/), and the SASS website includes a comprehensive list of cowboy action shooting clubs in the State of Virginia (https://sassnet.com/clubs/Clubs_list.php?state=Virginia).

Scientists discover how to charge phone battery in 5 minutes

Scientists discover how to charge phone battery in 5 minutes

Something slithering got you scared? You’re probably safe

While many of us harbor a fear of snakes, expert says most around here are not dangerous to people

Obituaries for week of June 6

There is a story occasionally told in my family about my mom. Shortly after moving to Richmond, my mother came in from taking out the garbage …

Goochland Pet Lovers’ (GPL) Good Neighbor Fund has been renamed in Memory of William E. Quarles, Jr. who served as a board member for Goochlan…

In the garden: With pollination, it’s often the little things

Insects are so small they sometimes escape our notice. However, they are responsible for a huge task. Eighty-seven percent of plants are polli…