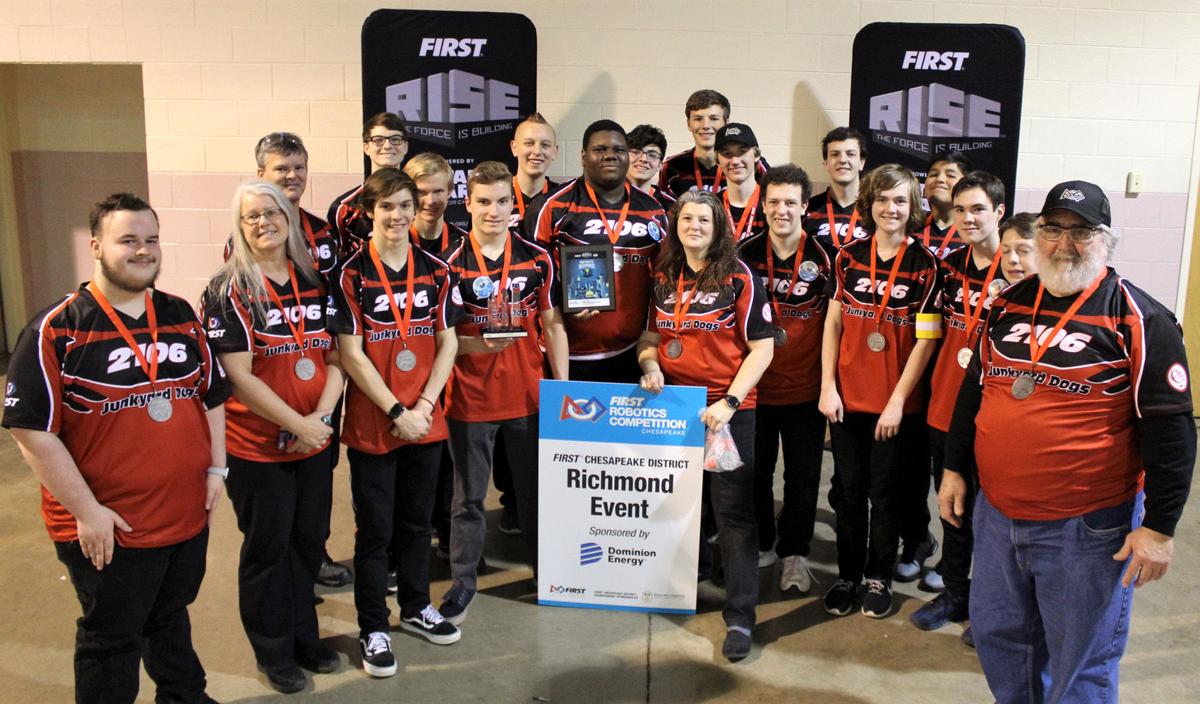 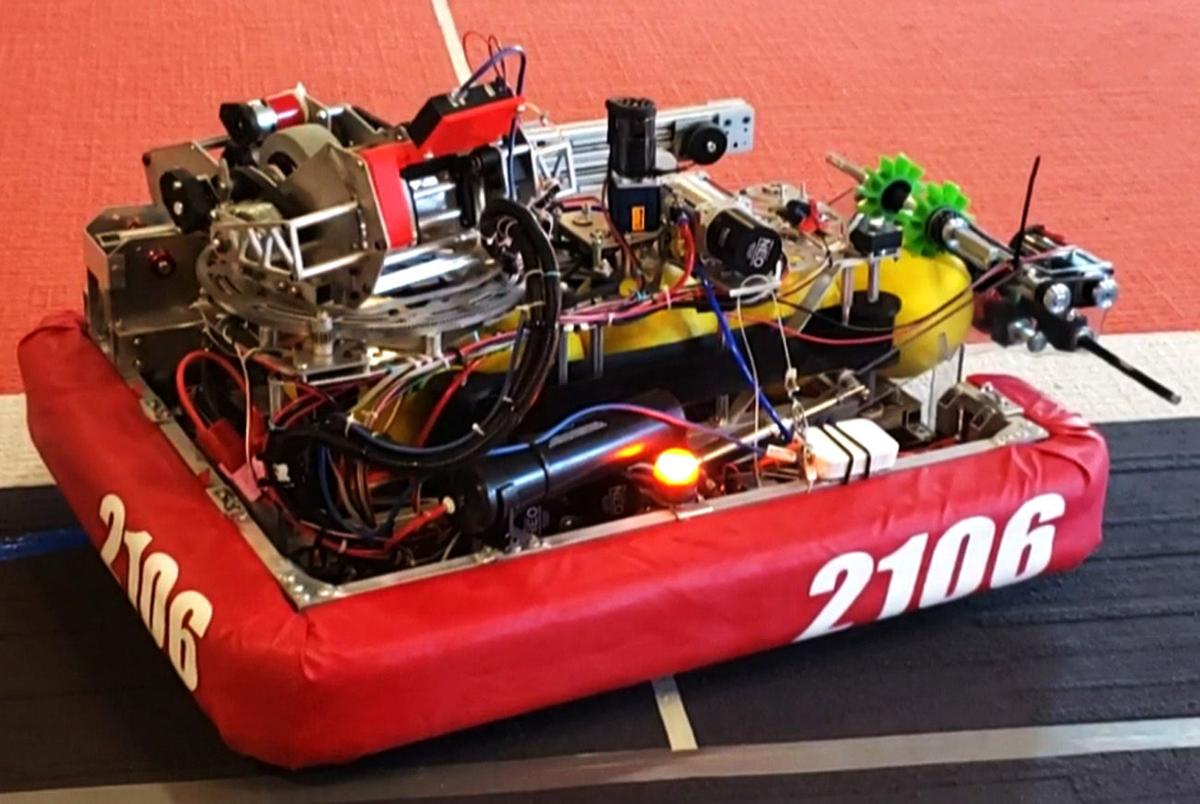 The Goochland Junkyard Dogs’ robot, which they affectionately nicknamed “Ankle Biter” for its short stature.

The Goochland High School robotics team, which featured several seniors this year, was confident in its ability to reach the 2020 For Inspiration and Recognition of Science and Technology (FIRST) world championships in Detroit after previously competing in regionals.

Ultimately, the Junkyard Dogs would only get to showcase the robot they created for this year, as well as the growth they’ve made since Stephanie DeLoach first took the helm of the program, in one competition: the Chesapeake District Richmond VA Event sponsored by Dominion Energy, held during the first weekend of March. The COVID-19 pandemic led to the closure of all Virginia schools and the subsequent cancellation of all Virginia High School League activities for the rest of the school year, as well as the cancellation of this year’s world championships.

But in their one competition, the Junkyard Dogs’ accomplishments went beyond their own performance.

They didn’t just rank first in the event with a 16-4 record – they also helped Danville-based TeamTalon build its own robot at the competition.

When they walked in during the day of load-in for their pits, DeLoach said they saw John Julock, who has been Goochland’s mentor for 11 years and a mentor for FIRST for 16, rushing about as he worked to help another team get things together.

“One of the other team coaches . . . that knew me very well, he said, ‘There’s a team over there that really needs a lot of help if you have time to help them,’” Julock recalled. “I said, ‘Where at?’ And he showed me where they were and I went over there and I looked.”

All there was to the robot at the time was a frame with a motor mounted in, and the wheels weren’t even connected.

TeamTalon was moving high schools, and in the transition, it had lost a lot of its robotics equipment. The team was working to complete its robot in time in order to get it inspected and have it participate.

So Julock and Goochland’s team members worked to put the drivetrain together and had it wired up in less than two hours.

“John, when he walked away from there, he was sweating, because he was like, ‘That’s the fastest I’ve ever wired a robot, before,’” DeLoach said. “He did a phenomenal job.”

Volunteers from FIRST pitched in on the programming side, and the Junkyard Dogs’ team captain, senior James DeLoach, brought their computer home, updated their software and programmed it so that TeamTalon’s robot would move.

TeamTalon was inspected before the competition started and given the go-ahead. The team’s robot completed all 12 qualifier matches and was part of three alliance victories.

The tasks of this year’s game, Infinite Recharge, included taking in and shooting gator balls that were seven inches in diameter into target holes, known as power ports, at the uppermost and bottom points of an eight-foot-tall structure. Other elements to the game included spinning a color wheel and then getting the robots to hang from and balance out both ends of an overhead, seesaw-like lever.

The game also pitted one alliance against another. Each alliance consisted of three teams – with one robot per team – and the teammates changed from match to match during the qualification rounds. The Junkyard Dogs got to team up with a wide range of different allies, who hailed from locations like Charlottesville, Mecklenburg and the Eastern Shore, before taking on the playoffs alongside teams from Fairfax and Franklin.

The Junkyard Dogs and their allies won two of three quarterfinal matches, then swept the semifinals with two wins to reach the finals. But they lost two of three to finish runner-up among the alliances.

But individually, it was Goochland’s first time ever ranking first in a competition. At the Richmond Event, the Junkyard Dogs claimed the top spot ahead of the runner-up, Deep Run High School’s Blue Cheese, and took home a Finalist Award plus the Gracious Professionalism Award.

Stephanie DeLoach said Gracious Professionalism is realizing that, even though you’re competing against others, you’re also working with them to learn, understand and accomplish tasks.

“I’m really proud of them,” Stephanie said of her team. “We had a couple of issues that night with our own robot, but they really were not worried about that.

“When I came home – I have two boys on the team – and they both said . . . the most important thing right now is helping them get out on the field, because they’re here, they want to play.’ And it didn’t matter that we had other things we needed to get done. It was like, ‘We need to help them because it’s important.’”

“We were able to basically take this piece of metal that had absolutely no function whatsoever and take all their electronics – I had to update all their firmware, do all that – and then we made it into an actual cohesive system in like no time at all,” James DeLoach said, “and we just got them up and running. It was really cool.”

“And the other team was extremely appreciative,” Stephanie said.

James also gave them some resources to continue their learning.

“It mostly reminded me of our team back in 2016,” James said. “That’s why I was like: I need to help these kids out, because they could be like us in the next four years, increasing their knowledge.”

“It’s gratifying because you see kids that, before they start robotics, they’ve never picked up a screwdriver, and at the end of the competition, they helped build a robot,” said Julock, who added it’s been nice to see how Stephanie has taken the program and “escalated it tremendously” over the past few years.

“Now we have two rooms there we can work on to build a robot in. Goochland’s been very good with supporting us, supporting the team,” Julock said. “They give us more facilities, they help us out financially, we get stuff to work on our robot and everything else. It’s been a very progressive, very uplifting experience over there.”

He’s gotten to see students in the program make the decision to go into mechanical engineering in college.

“And if it wasn’t for robotics, I don’t think they would’ve made that decision,” he said, “because they wouldn’t have been exposed to mechanical engineering.”

Stephanie said that this would’ve been the Junkyard Dogs’ best year ever, and that everyone was pretty disappointed about the season getting cut short.

“But I have to say, that when we found out that the season was going to be cancelled, I’m so proud of the kids, because as soon as we found out that it was cancelled, they immediately started talking about – while there was a little bit of, ‘Wow, I wish we could go [to worlds],’ there was also, ‘Okay, what can we do to make it better for next year? How are we going to make sure that this learning continues?’”

For James – who plans to study computer science and mechanical engineering as well as maybe electrical and computer engineering – the heartbreak of losing his senior robotics season didn’t really hit him until the day after.

“It was tough. My heart was definitely broken,” James said. “But I really want to see this team succeed.”

He started writing a message to everyone on the team talking about their plans for the next few months. In his message he said: “We can’t return to what we were back in 2016. We have to just keep on advancing.”

He asked his teammates for any knowledge or input on making a robot or any part of the robotics process – including sponsorship and graphic design – that he could include in a presentation or video, which would be uploaded to Goochland robotics’ website so that everyone would have access to it.

Losing the rest of the season has also shown James that he’s not done with robotics yet – he needs to keep going. He’s talked a lot about mentoring high school teams that are near Virginia Tech, where he’s slated to go for college.

Stephanie will miss all of her seniors, and she’s hoping they’ll be able to help the team down the road either as mentors or volunteers at future events.

The Goochland Junkyard Dogs’ robot, which they affectionately nicknamed “Ankle Biter” for its short stature.