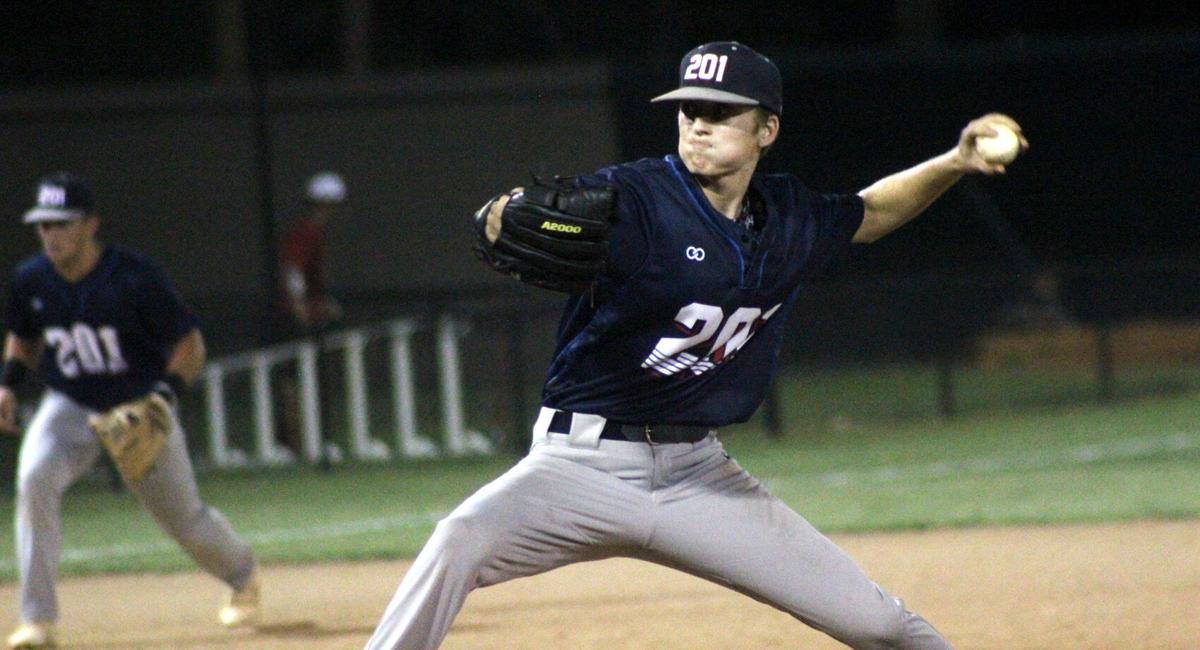 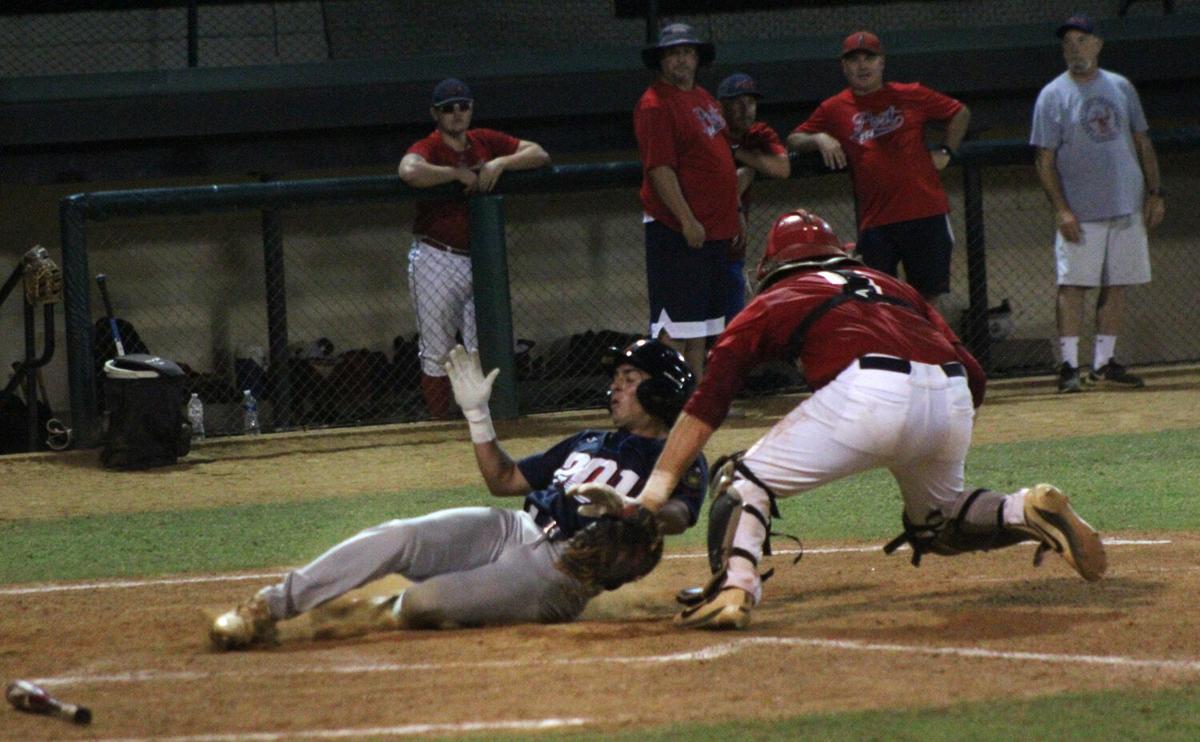 Post 201's Caleb Kersey beats the tag from the catcher to score a run on the slide home in his Seniors' game at Post 284 in Shepherd Stadium on July 28, 2020. 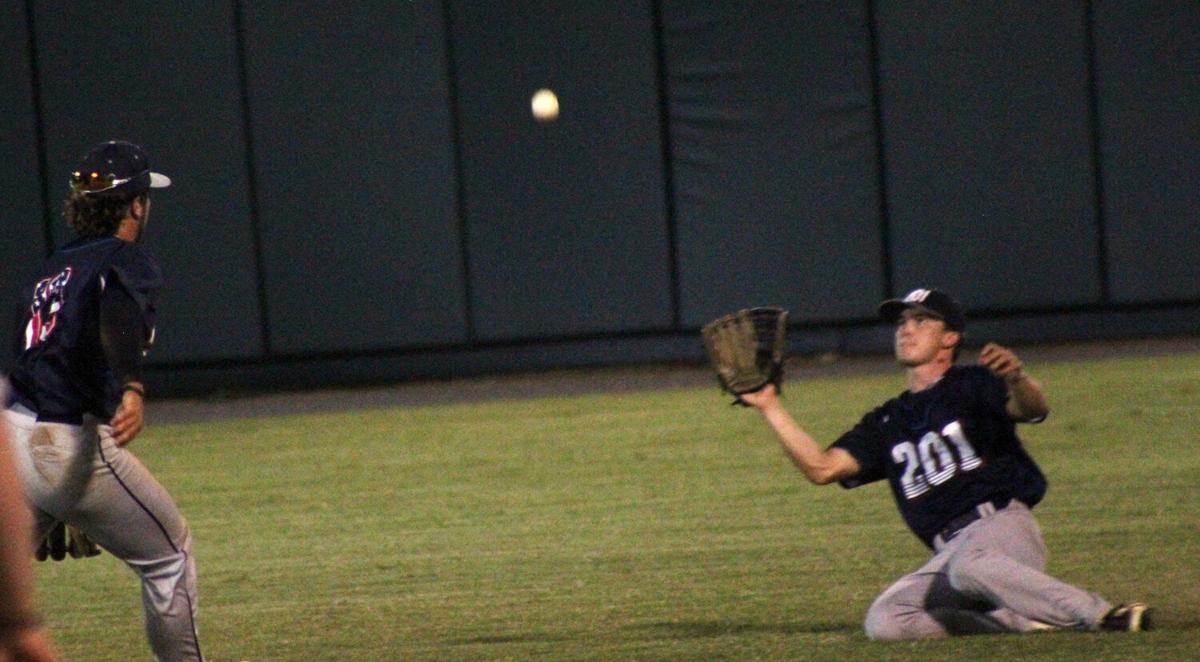 Post 201's Colby Cheatham hits the ground as he makes the catch in right field for an out early in his Seniors' July 28, 2020 game at Post 284 in Shepherd Stadium.

COLONIAL HEIGHTS – Going into Tuesday night’s game at Shepherd Stadium, American Legion Post 201 coach Eric Mead had made up his mind that his team would pitch by committee.

Four Post 201 pitchers held hosting Post 284’s bats to four hits and one run through the first six innings – a stretch that proved crucial for the visitors when 284 took advantage of a couple of fielding errors and tightened the lead to 7-5.

Drew Camp, always a home run threat, stepped up to the plate in the bottom of the seventh, representing the home team’s tying run as he also had a teammate on base.

Carter Dawson took over the mound to face him. “Don’t put it down the plate” was the thought that he said went through his mind. He was trying to work outside – his two-seam was working well – and he used commentary from the dugout to fuel himself.

Camp skied it high and deep into right field.

It fell into the waiting glove of Caleb Kersey.

“Those pitchers did a really good job all night long,” Mead said.

Goochland’s Billy Thackston, who attends Christ School in Arden, North Carolina, got the start for Post 201 on Tuesday night. He said the key was to “just throw strikes and let them hit it and let the defense do the work, knowing that I have a great defense behind me.” He struck out one batter on a full count and held Post 284’s first nine batters to two walks and one earned run off of two hits.

Behind Thackston in the second inning, Colby Cheatham hit the ground on a catch in right field, and Alex Balisteri, after just missing what would have been a spectacular diving catch on Camden Weston’s RBI single into the left field corner, quickly recovered to relay the ball to third baseman Brandon Eike, who tagged out Weston trying to stretch his double into a triple.

Carson Conner of Blessed Sacrament Huguenot made his first pitching appearance in a Senior Legion game during the fifth inning. While he walked two, he didn’t allow any hits or runs. Behind Conner, shortstop Josh Boelt pumped his fist shortly after flipping the ball to second baseman Cameron Shields, who in turn zipped it to first baseman James Nelson to complete a 6-4-3 double play.

Connor Woodel struck out the side in the sixth inning to go along with his two quality at-bats, which included a run scored and a line drive single into center field in the third.

While Stone Talley was on the hill for just two-thirds of the seventh inning, Mead said he pitched very well and noted that the fielders made two errors behind him on a dropped catch in shallow left-center and a missed grab on a ground ball down the first-base line.

Dawson closed out the game, facing only Camp. All six Post 201 pitchers combined to scatter four hits, five runs and eight walks and strike out seven.

Sitting fastball and adjusting to off-speed pitches, Woodel led off with a single to kick-start a five-run third inning in which Post 201 seized the lead for good. The visitors scored their five runs on a walk, a hit by pitch, two wild pitches and a groundout to the shortstop from Talley.

Woodel in the sixth helped stretch Post 201’s lead a little further when he advanced to first on a hard-hit ground ball and a shortstop error, allowing Kersey to dash home and beat the tag on the slide across the plate.

Nelson, who batted 2 for 3 with two RBI, a run and a double, gave Post 201 a 1-0 lead in the first inning when he smacked a single into right field to plate Christian Chambers, who overall scored two runs.

Eike walked in the go-ahead run in the third inning, scored a run in that same frame and doubled to the left field wall in the sixth. In addition to tagging out Weston in the second inning, he reacted in an instant to a line drive hit hard to him in the seventh, reaching over and snatching the laser out of the air from third base.

“You’ve got to be on your toes every play, ready to roll,” he said.

For Eike, who will soon be attending the University of North Carolina where he'll play for the Division I Tar Heels, it’s just been good to get back on the field this summer.

“I think we all needed it."

Post 201's Caleb Kersey beats the tag from the catcher to score a run on the slide home in his Seniors' game at Post 284 in Shepherd Stadium on July 28, 2020.

Post 201's Colby Cheatham hits the ground as he makes the catch in right field for an out early in his Seniors' July 28, 2020 game at Post 284 in Shepherd Stadium.