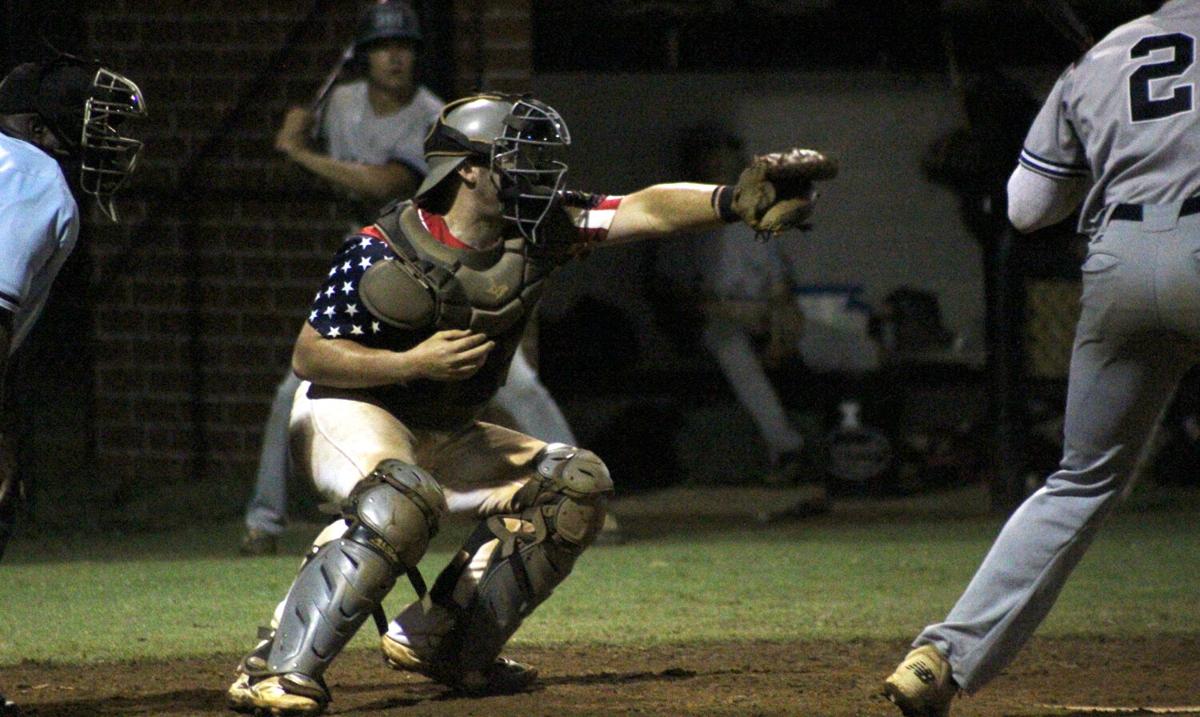 Powhatan High School Class of 2019 graduate Trevor Waters catches a pitch before rising to throw to third base in an attempt to catch a runner stealing in Post 201 baseball's home game versus Post 361 on July 30, 2020. 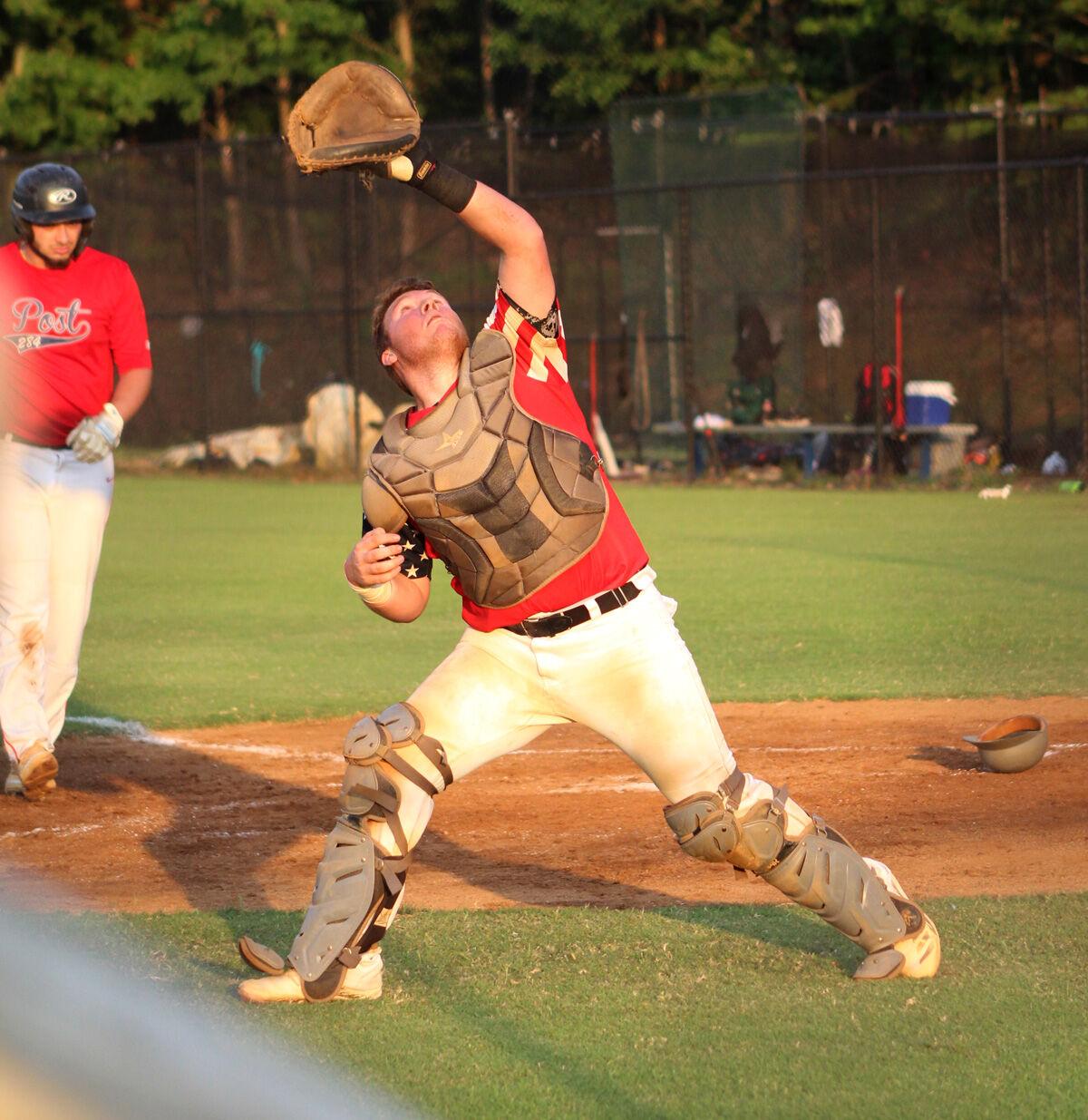 Trevor Waters tracks down a fly ball behind the plate in foul territory in Post 201's July 16, 2020 home game versus Post 284 at Powhatan High School.

POWHATAN – Trevor Waters had initially joined Longwood’s baseball team as a walk-on his freshman year. But before the spring season started, they let him go.

So during that season, the Powhatan High School Class of 2019 alum worked on his own, then came back out to play for American Legion Post 201’s team this summer. Waters got into the transfer portal, and he ended up hearing from Georgetown College in Kentucky. Waters recalled them saying that they liked what they saw based on the Longwood fall ball games he played, as well as on the rundowns and stats from this summer’s games with Post 201.

From there, Waters committed to Georgetown.

“It means so much because I thought that my career was going to be over,” said Waters, who will be going as a catcher. “To be able to keep playing baseball is just amazing.”

“When things didn’t work out good for Longwood, Trevor didn’t give up. He wanted to continue to play baseball. He loves the game,” said Waters’ Post 201 baseball coach Eric Mead. “For him to get an opportunity to go to Georgetown College and play, I think it’ll be a good fit for him. I think he’s going to enjoy himself and play good baseball down there for them."

Mead said Waters “does a very good job of running the infield and knowing the game and knowing where he’s at.”

“All year long, he’s called his own pitches. We haven’t called any pitches from the dugout at all,” Mead said. “He’s been very smart on his pitch selections. He’s just an all-around good guy that you love to have behind the plate.”

The Georgetown Tigers compete in the Mid-South Conference of the National Association of Intercollegiate Athletics. Waters, who this summer caught multiple base runners trying to steal second and third, loves that Georgetown values defense higher than offense.

“I believe a lot of teams, especially nowadays, are trying to get people to hit home runs, and then people score a lot of runs against them, and it’s counterproductive,” he said.

He's looking forward to fitting into whichever role they tell him he needs to be in, and also to doing the best he can.

Before he takes the next step, Waters has been able to enjoy one more summer playing with guys he’s known for more than a decade.

“Even the guys from Midlo, I’ve played with them my whole life,” he said. “Especially seeing guys like Brandon (Eike) who are going to top-tier ACC schools that I’ve been friends with since I was seven years old is just – it’s great.”

Their last game of the summer

Brandon Eike played his last game for Post 201 this summer on Thursday versus Post 361. Powhatan High School's Class of 2020 graduate leaves Sunday for the University of North Carolina, where he’ll play Division I baseball for the Tar Heels.

“It’s been a pleasure with him being here and being able to play with us. We’ve certainly enjoyed having him on the team,” Mead said of Eike. “He brought a big stick to the team, which is certainly going to be missed. But we’ve got a lot of big hitters on the team that we’ll be able to finish off the last week with no problem at all.”

Both Carter Dawson and Connor Woodel were able to pitch in their last game this summer with Post 201 before they go on vacation.

“Both of those guys, we’re looking for them to really contribute next year at Powhatan,” Mead said, adding: “All three of them are really great guys, really great baseball players and I’ve enjoyed having them and enjoyed playing with them.”

Post 361 tied the game in the third inning when Luke Schwartz scored his second run off of Chance Muir slamming a double to the fence, and Muir came home to lift his team into a 3-2 lead when Jack Anderson struck out on a wild pitch, then took off for first and safely reached base after the pitch flew past the catcher.

Post 361 steadily built its lead from there, adding a crucial insurance run in the fourth when Hayes Fallen came home before Post 201 completed a double play with the bases loaded, forcing out a runner at second and then tagging out another in between second and third. Fallen’s run helped Post 361 keep the lead when Post 201’s Cameron Shields in the bottom of the frame scored off of Stone Talley grounding out to the shortstop.

Shields and James Nelson combined on another double play for Post 201 in the second inning; Nelson shifted over and stopped cold a line drive hit by Fallen, then threw the ball to Shields to retire the runner in his bid to tag back up at third base.

Nelson was also quick to react after an attempted 5-3 play came up short in the fifth when he zipped the ball to his teammate at third to put out an incoming base runner.

Post 201 is slated to play its final summer contests this week with home games versus Post 125 (Tuesday) and Post 39 (Thursday) at Powhatan High School at 7 p.m., weather permitting.

“Every team out here can win or lose to another team that’s in this league. There are just so many good baseball players playing in the league,” Mead said. “We’re going to have to hit with 125, 125’s going to hit the ball. We’re going to have to come out and swing the bats a little bit better than we did tonight (Thursday). Our bats were dry tonight.”

Powhatan High School Class of 2019 graduate Trevor Waters catches a pitch before rising to throw to third base in an attempt to catch a runner stealing in Post 201 baseball's home game versus Post 361 on July 30, 2020.

Trevor Waters tracks down a fly ball behind the plate in foul territory in Post 201's July 16, 2020 home game versus Post 284 at Powhatan High School.