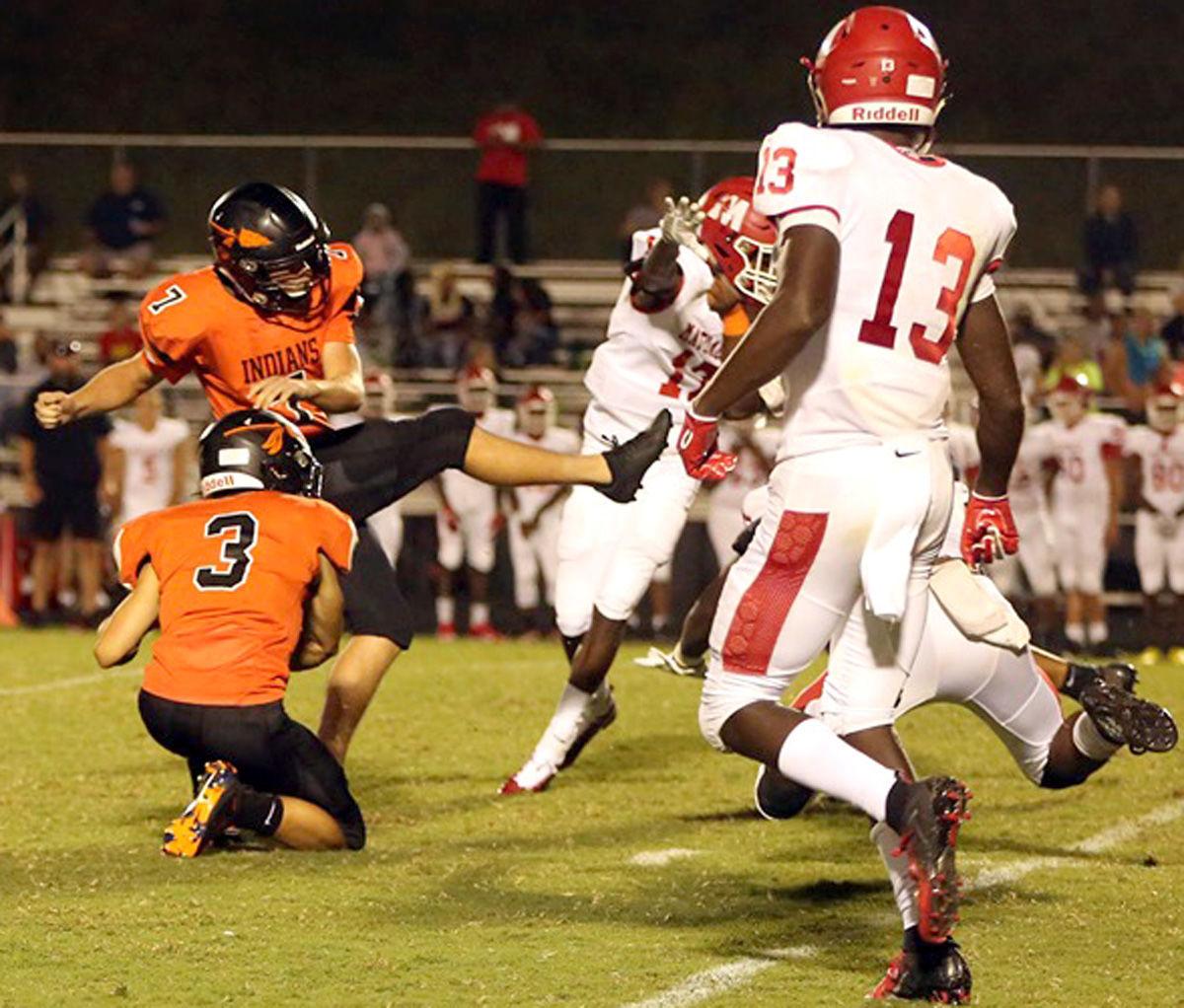 Powhatan senior Mason Pinnell (7) kicks for a field goal in the Indians’ 2019 season opener versus Matoaca on Sept. 6, 2019. 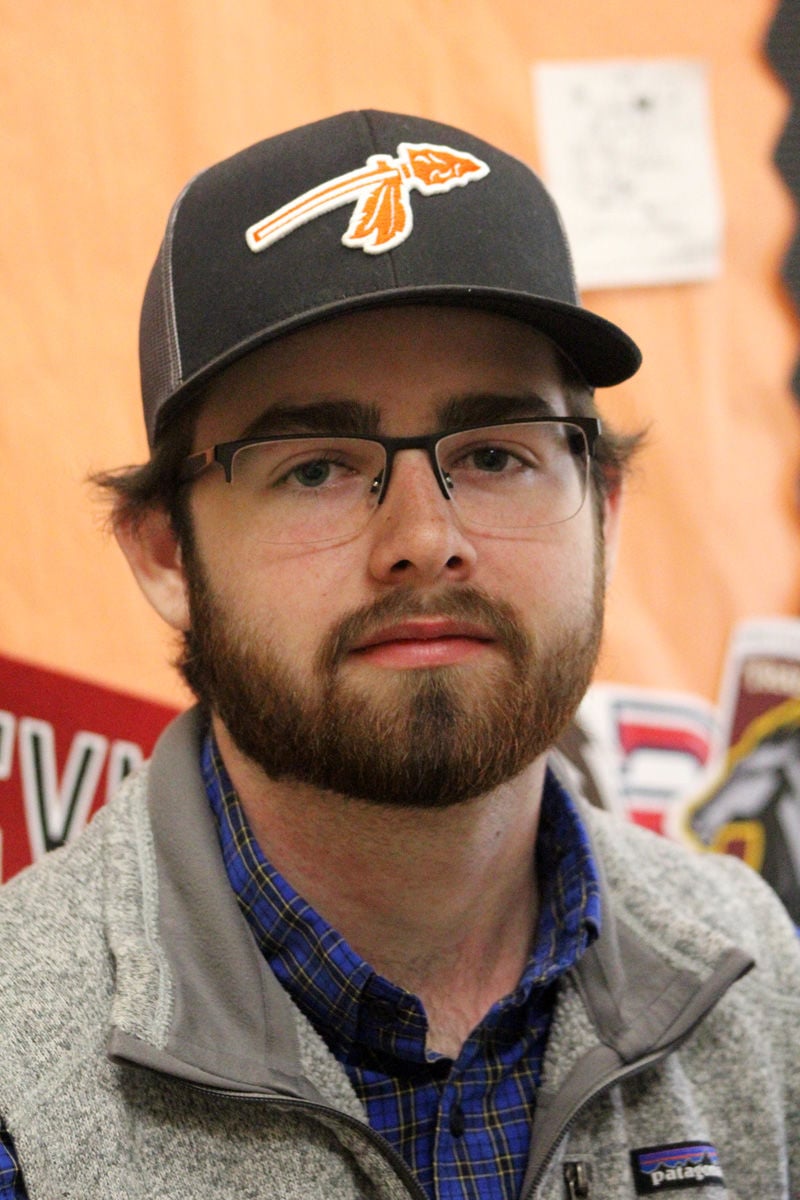 POWHATAN – Mason Pinnell played baseball throughout much of his life. It wasn’t until his eighth grade year that he would ask his parents if he could play football.

He'd go on to join the Powhatan Warriors’ team, and late in the season before a practice, he was among those kicking the ball just for fun.

He recalled his coach telling him: “Man, you can actually kick.” And then extra-point kicking practice came around.

Pinnell made 9 of 10 extra points.

His coach told him: “Man, I think you’re going to be a kicker.”

Pinnell took that with him, and while he still wanted to play baseball going into his freshman year, he tried out for football just to give it a shot. But he didn’t make the team, and he also didn’t make the baseball team that year. At that point, he didn’t want to continue playing sports.

But right before the next football season came around, coach C.J. Lindhjem texted Pinnell, asking him if he was going to try out for his team.

So Pinnell tried out his 10th grade year.

He made the team.

And now, more than two years later, the Powhatan senior is on his way to continuing his football career with NCAA Division III Averett University.

Pinnell in 2019 kicked three field goals in six tries, had two touchbacks and averaged 37.6 yards per punt. He made history when he recorded the longest field goal made by a Powhatan High School kicker in the Indians’ 2019 season opener versus Matoaca.

And then he heard the actual total on the loudspeaker.

He had just nailed a 46-yarder, eclipsing the previous school record of 41 yards set in 1996.

Pinnell has appreciated being able to participate with Powhatan’s team, as well as being able to keep his Indians in games when they’ve needed him. It means a lot to him that he’ll be able to represent Powhatan football at the collegiate level, and to do so as a kicker.

“I know that from Powhatan, a lot of guys don’t go and play on in college for football,” Pinnell said, “and to be able to continue the legacy for Powhatan and just bring Powhatan to another school, it’s nice to just get the name out there.”

Averett initially wasn’t among the colleges that Pinnell was looking at. But after his mom asked him if he had heard of the Danville-based school, he looked it up, saw that it had a good football team (the Cougars went 15-5 over the last two seasons), applied, got accepted in, talked to the coaches and went on an official visit to the campus.

“Everything they said, it just – it hit me,” Pinnell said. “I knew I needed to be there.”

He felt that connection with the coaches right away.

He observed that the players on the team are “all like one big family.”

“It’s not like, ‘We’re all just here.’ It’s…always together, always participating in things together,” said Pinnell, who added that the university’s facilities, including the turf football field, are “fantastic.”

He also likes how Averett is a small school.

“It’s smaller than other schools,” Pinnell said, “so in the classroom, you need help with a professor, you can go and talk to him.”

With the kicker position, Pinnell emphasizes how the technique and form have got to be there in order for the kicker to get the ball to where it’s supposed to be. And it’s not easy, he said.

“I like how I can go out and just be alone…I don’t have to have somebody throw the ball to me,” he said, “and just work on technique and form by myself – calm, relaxing – and just kind of get it right, reps over and over again.”

There are times where a win or loss can come down to a field goal or an extra point. The Indians got one of their biggest wins of the 2019 season that way when Pinnell footed through a 1-point kick after a game-tying touchdown catch made by his teammate Jaysun Carroll to put Powhatan ahead of Clover Hill, 21-20, in the closing seconds.

But when it comes to the missed kicks, Pinnell said that “you’ve kind of just got to let it go.”

“You can’t dwell on one kick,” he said. “You’re going to have plenty of kicks in your career, and one kick – if you lose a game by one kick, it’s not your fault.”

And you’re going to have bad kicks along the way, he added.

“You’re not perfect, nobody is,” he said. “You just can’t let it bother you. You’ve just got to keep going, focus [on] the next kick.”

The summer before his senior year, Pinnell participated in camps at Liberty and Duke universities. He got to work with the kickers and was able to see what he needed to improve on through reviewing videos of his performances.

As he moves forward, Pinnell wants to keep improving not only on his kicking distance, but also on not thinking about others kicks he’s made.

As for committing to Averett and getting to attend college, Pinnell said it means a lot to his family.

“Nobody in my immediate family has gone to a four-year school or any college such as that, and it’s just nice that I can do it for them and do it for my other family members,” Pinnell said.

“I just thank God,” he added, reciting “Joshua 1:9 - Have not I commanded thee? Be strong and of a good courage; be not afraid, neither be thou dismayed: for the Lord thy God is with thee whithersoever thou goest.”

Powhatan senior Mason Pinnell (7) kicks for a field goal in the Indians’ 2019 season opener versus Matoaca on Sept. 6, 2019.