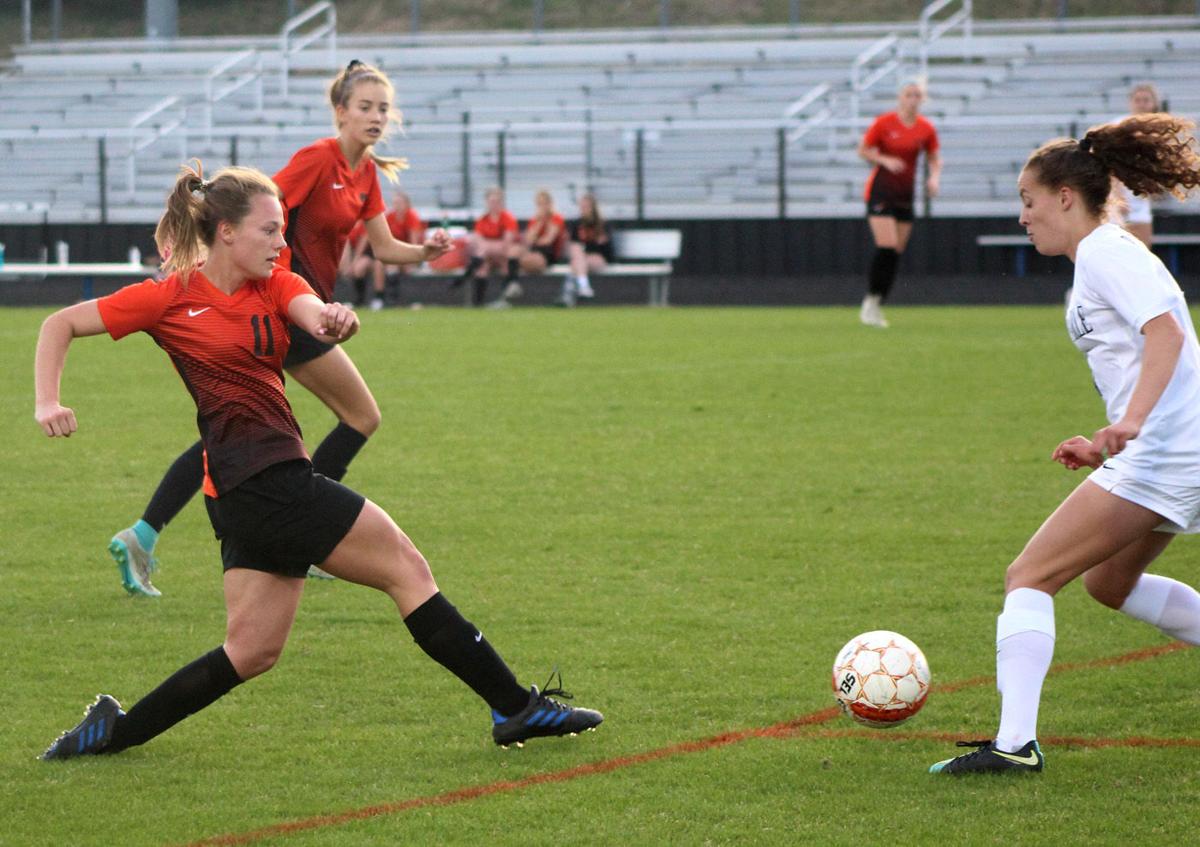 Powhatan High School’s Jeanne Wolkiewicz passes the ball during a 2019 regular season game. Wolkiewicz will be continuing her athletic and academic career at Bryn Mawr College in Pennsylvania near Philadelphia. 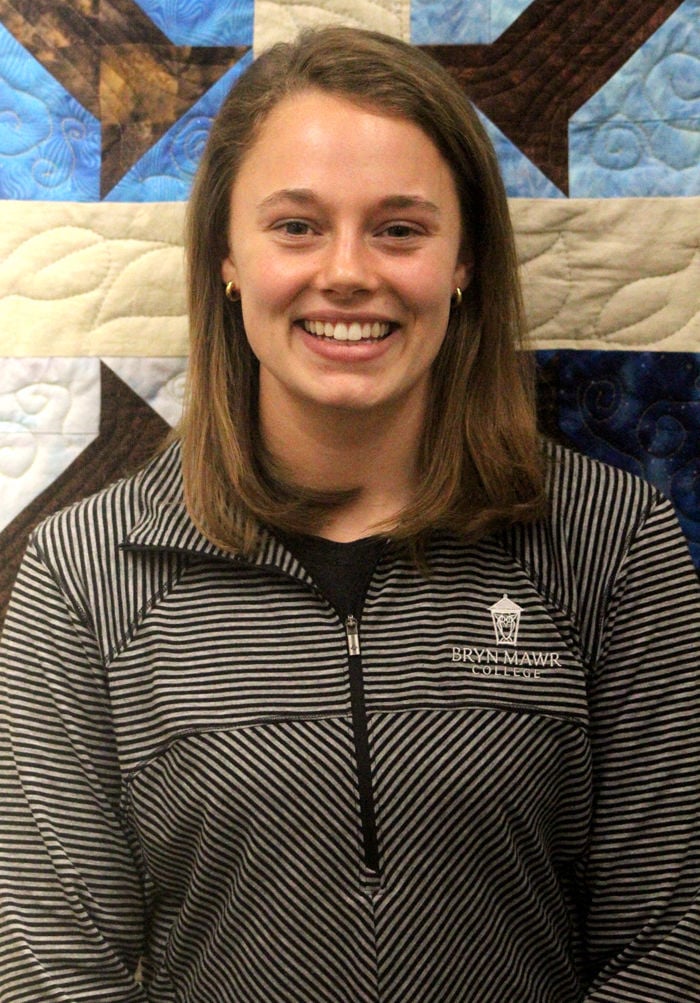 POWHATAN – It was a Monday afternoon.

The COVID-19 pandemic had reached the United States, altering life across the nation. Schools closed. Sports leagues cancelled their seasons. Businesses deemed essential adjusted their practices as the Stay at Home order, issued by Virginia Gov. Ralph Northam, was in effect.

Powhatan High School senior Jeanne Wolkiewicz received a text. It was from her neighbor and close friend.

“My mom needs you to come to work,” she recalled him saying in the text. “Can you please come in to work?”

She agreed to do so, and asked what it was that they did.

“Well, we’re testing for COVID,” he said, “and I really need you to pull through for me.”

She called Charnetta Williams, who said that she really needed people, and asked Wolkiewicz that, if she could come up with some other good people, to let her know.

She showed up to work at a building in Innsbrook that used to be a library, but when she walked in, she observed that it was a full laboratory. Up front were cubicles for billing, client services and offices.

During her first day – and for most of the first week – Wolkiewicz and her colleagues did kit building. At the lab, they put together kits with a swab, a requisition, a biohazard bag, a clinical pack and billable stamps. Those five things go into boxes before getting sent out to doctor’s offices, nursing homes, urban care facilities. All five things have to come back.

The lab at which Wolkiewicz works - GENETWORx Laboratories - tests kits from all over the country.

“You name it,” Wolkiewicz said, “they test it.”

It became Wolkiewicz’ role to assist Williams, the operations manager of the molecular lab and a lifetime family friend, in any way she could. That means pretty much anything and everything falls onto Wolkiewicz plate in some sort of way – which Wolkiewicz loves.

When the kits come back to the lab, every sample has to register with information including name and date of birth. But the week after Wolkiewicz had started at the lab with kit building, they ran out of space for where they normally do registration. The people who had been in the cubicles before were working at home at this point, so every cubicle was taken up with registration.

They recently reached the point where they ran out of space again, so they added more tables and more computers.

Wolkiewicz texted her FC Richmond teammates, asking them: “All right ladies, who needs a job?”

At least six of them got back to her within the hour and said: We’re in; how can we help? What can we do?

Due to the pandemic, their travel season had ended prematurely the week before. They were supposed to have one more tournament, and they were looking forward to it – they had been enjoying a record-breaking season for their age group – but that tourney ended up getting pulled, and while it could still happen in the fall, most of the team consists of seniors.

Most of Wolkiewicz’ teammates who help out at the lab are also seniors.

“It’s really sweet and really awesome to kind of be together with them one more time before we all go off to Pennsylvania and then a lot of girls to UVA,” Wolkiewicz said. “We’re all going separate places, but it’s nice to be together while we can, and it’s fun, too … because the connections that you have with your teammates are just different than anything else.

“When we’re all in the break room for lunch or when we walk past each other in the hall, there are inside jokes and there’s a lot of giggles, and I have to keep it light, because it is a tricky job and it’s hard emotionally sometimes,” she said. “But being with people that you’re just that comfortable with – that level of comfort that comes from being on a team with somebody – it’s very reassuring.”

With her travel teammates included, Wolkiewicz noted that several athletes work in the lab, which is fun for her.

“It’s this group of really young people doing some pretty heavy stuff. What we do is pretty serious – if things are not registered correctly, people don’t get their results, or tests don’t happen. It’s a big deal,” Wolkiewicz said. “But they do it well!”

Wolkiewicz also had teammates whose sisters had lab jobs that had to get cancelled because of COVID-19. Not only has this been a cool experience and opportunity for Wolkiewicz, but she’s been able to help others continue their education and experiences to help them with life after school.

“It’s been a really cool job,” Wolkiewicz said. “I’m not a lab person – I’m not a science person; I’m a political science person, so very different – however, I think science is very interesting and I love it. . . . It’s a very hands-on job as well.”

Wolkiewicz has gotten to help with registering lab samples and answering phone calls as an aid to client services.

“The people skills that I’ve learned in three weeks are more than I learned in the rest of my life – how to engage with people, how to communicate effectively but succinctly,” she said, “and also how to rally a team.”

Williams, Wolkiewicz added, is the best team leader she has maybe ever seen.

“She just blows my mind every day,” Wolkiewicz said of Williams. “She is invaluable to everybody that works there. We all love her. Don’t know what we’d do without her."

Getting to learn from Williams has been an incredible experience for Wolkiewicz.

“She’s really intelligent with how she communicates to people," Wolkiewicz said. "I think the first thing she taught me was: ‘If you’re asking somebody to do something, you need to also explain what you’re going to do to help out as well.’ That’s brilliant. Of course I want to let somebody else feel valued, because they are a valued member of the team. She’s really made that first and foremost in everything she does.

“She also taught me that sometimes it’s okay to not get everything done,” Wolkiewicz said. “Some days are overwhelming and you have to prioritize. … Maybe there’s just not time for this today, and that’s okay, and we can handle it tomorrow. That’s been a really peaceful lesson to learn from her.”

For Wolkiewicz, this spring has featured a big balance between grieving the loss of athletics and the experiences of her senior year, and gaining “this awesome experience of working in a lab” as well as more time to do some things that she wouldn’t normally have time to do.

The lessons she’s learned from Williams are ones she expects to remember and hold onto for the rest of her life. And following a daily routine during a crisis, as she is doing now, is something that Wolkiewicz expects to encounter a lot more throughout the rest of her life. Wolkiewicz wants to be a Foreign Service Officer, and she specifically wants to go into the part where she would help developing nations develop given what the United States has to offer.

“It’s awesome to be able to have an impact on people’s lives, so it’s kind of confirming for me that I do want to help people solve pretty overwhelming problems,” she said.

Through helping client services at the lab, she’s heard from patients who are “just absolutely terrified.”

“They have no idea whether or not they have the coronavirus. They have no idea whether or not they’ve gotten their family sick, and if they do have it, they have no idea where it came from, and that’s scary, too,” Wolkiewicz said. “I think it’s really important for everybody during this time to remember: People have their boundaries, almost everybody gets a boundary annihilated in some way by this disease, and compassion I think and mindfulness are two of the keys … If we just remember to take care of each other and respect each other, but also be mindful that, though it’s a very serious disease – and it is technically a global crisis – time keeps moving, and with time comes new opportunities, and I just kind of remind myself of that every day, because some days it’s scary.”

Powhatan High School’s Jeanne Wolkiewicz passes the ball during a 2019 regular season game. Wolkiewicz will be continuing her athletic and academic career at Bryn Mawr College in Pennsylvania near Philadelphia.