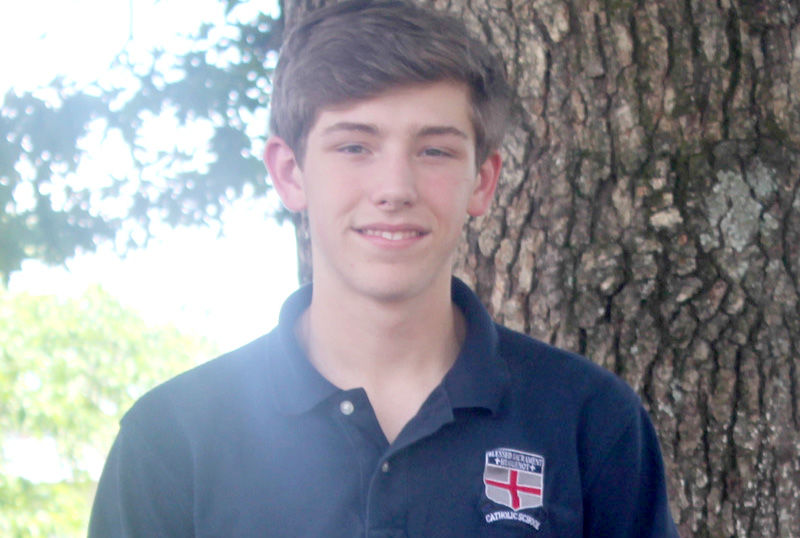 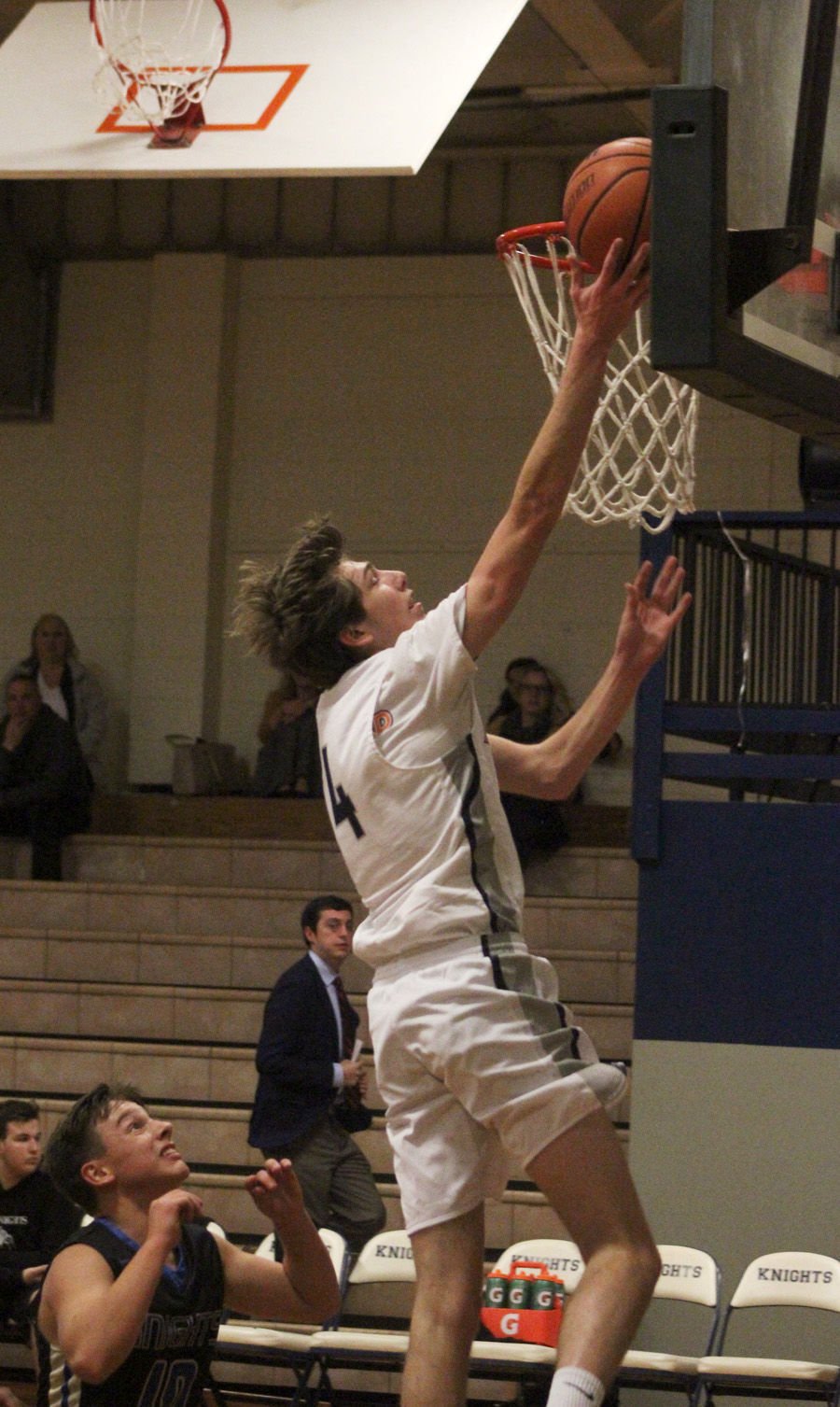 Robbie Kurtz goes for a layup in a 2019-20 season game at Blessed Sacrament Huguenot. 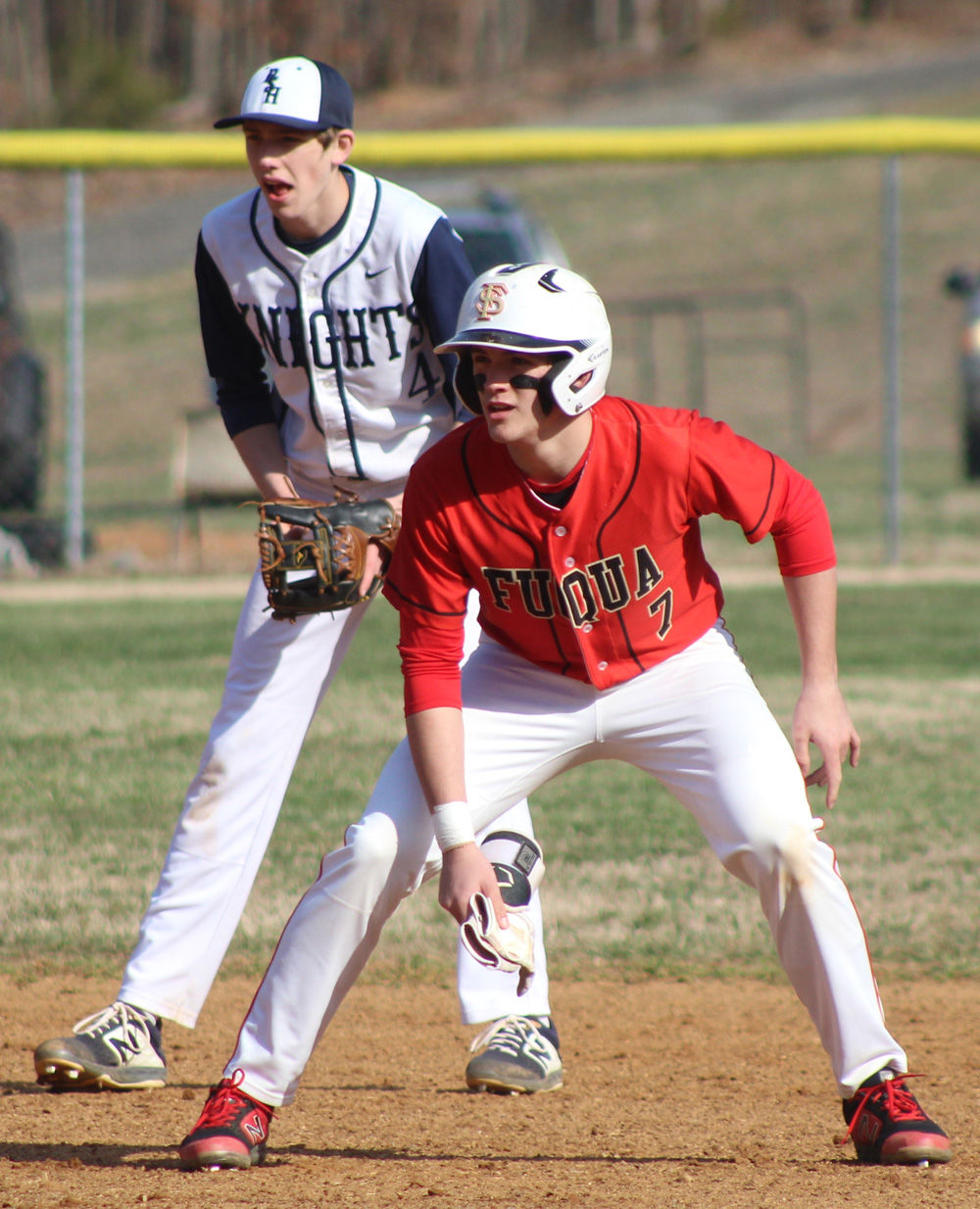 Blessed Sacrament Huguenot's Robbie Kurtz (left) prepares for the play from shortstop in a 2019 season home game versus Fuqua.

Basketball has been a part of Robbie Kurtz’ life since he was very young. He started playing when he was in Kindergarten and never stopped. Growing up, he played in the Upward church league and worked his way through the Bon Air league, until finally he was on coach James Poore’s middle school basketball team at Blessed Sacrament Huguenot.

He would shine as a standout on the basketball court. But it wasn’t the only place where his athleticism led to team success.

Kurtz first got into baseball around fourth grade as he had friends who were playing, and he was looking to play something different other than soccer. He started out in Little League, and he stayed with baseball through the years as well. It was when he started hitting home runs around fifth grade in the Huguenot Little League – and when he and his teammates won the local World Series – that he saw he was pretty good at it.

Nearly a decade later, Kurtz’ achievements speak for themselves.

Representing the BSH Knights, he became a 1,000 point scorer in high school basketball – and on the same night as did his teammate Raymond Avery – and he earned First Team All-State honors in 2019.

He added another accolade this June. Blessed Sacrament Huguenot named Robbie Kurtz its 2019-20 Male Athlete of the Year.

For Kurtz, earning that title is a huge honor and privilege as he leaves his final mark on BSH.

“It means a lot considering all the talented, successful and deserving athletes that belong to the senior class,” Kurtz said. “I owe a lot to my teammates and coaches that continually put me in positions to succeed.”

His dad has also always been there for him. He would always coach Kurtz on whatever basketball team he played on growing up.

“He was a huge role model for me and was always supporting me and being very helpful in my development as a basketball player,” Kurtz said. “I owe a lot to him.”

But Kurtz considered himself “not truly prepared or ready for varsity basketball” until he played under head varsity coach Chris Hamner.

“He made me into the player I am today and prepared me for varsity basketball and much more,” Kurtz said of Hamner. “Much of my success on the court is because of his coaching and mentorship.”

On the hardwood, Kurtz said much of his success in both his freshman and sophomore years came from shooting. But over the years, his athleticism helped him become strong at rebounding and playing above the rim. He also spoke to getting good at passing and involving his teammates in plays.

With baseball, Kurtz excelled at making contact at the plate, rarely striking out and contributing strong defense at shortstop. As a junior, he batted .500 with 29 hits, 30 RBI, 19 runs scored, 14 walks, nine stolen bases, five doubles and three triples and helped his BSH team achieve 10 wins in a season for the first time since 2012. In addition to BSH, Kurtz also played as part of the Powhatan Majors team in the 2019 Dixie Baseball Virginia state tournament.

In both sports, Kurtz felt he brought quickness, strong hand-eye coordination, leadership and a positive attitude and mindset.

Practicing for both sports was always a challenge, he said.

“You have to find the right balance,” Kurtz said. “I worked on both sports year round, but most of the practicing came during the offseason, mainly in the summer.”

For basketball he did more individual training and workouts, as well as open gyms and conditioning at school.

For baseball, his practicing often came through playing in summer leagues, including American Legion and Dixie Baseball.

The teammates Kurtz had in both sports are some of his best friends, and sports helped him build and develop those relationships.

“Having teammates in both sports enhanced my trust in them,” he said. “I knew exactly what to expect from them.”

Following his all-state season on the field in the spring, Kurtz had a senior season on the court to remember this past winter. In addition to helping the Knights’ boys basketball team put together its first winning season since 2015, the four-year varsity starter reached 1,000 career points alongside Avery, his teammate all four years, in the same game, and on back-to-back possessions.

Avery and Kurtz became the second and third BSH players to score 1,000 points after Kristian Hargadon, who presented each player with a game ball at halftime. The Knights also won that game, 65-60, over Brunswick Academy.

“The ending of my high school basketball career is something that I will never forget. Being able to reach 1,000 points for my career with my favorite teammate and one of my best friends, Raymond Avery, after all the hard work and dedication we put in is something I will cherish forever,” Kurtz said.

“With that being said, reaching that goal has motivated me to do more in my basketball career beyond high school and has shown me that hard work really does pay off.”

Kurtz will be attending Christopher Newport University this fall.

“At the moment I am training and practicing basketball to get ready for the CNU basketball tryouts,” he said. “However, I am not shutting the door on my baseball career and would love to play it at the club level or maybe even at the collegiate level if things work out.”

Robbie Kurtz goes for a layup in a 2019-20 season game at Blessed Sacrament Huguenot.

Blessed Sacrament Huguenot's Robbie Kurtz (left) prepares for the play from shortstop in a 2019 season home game versus Fuqua.