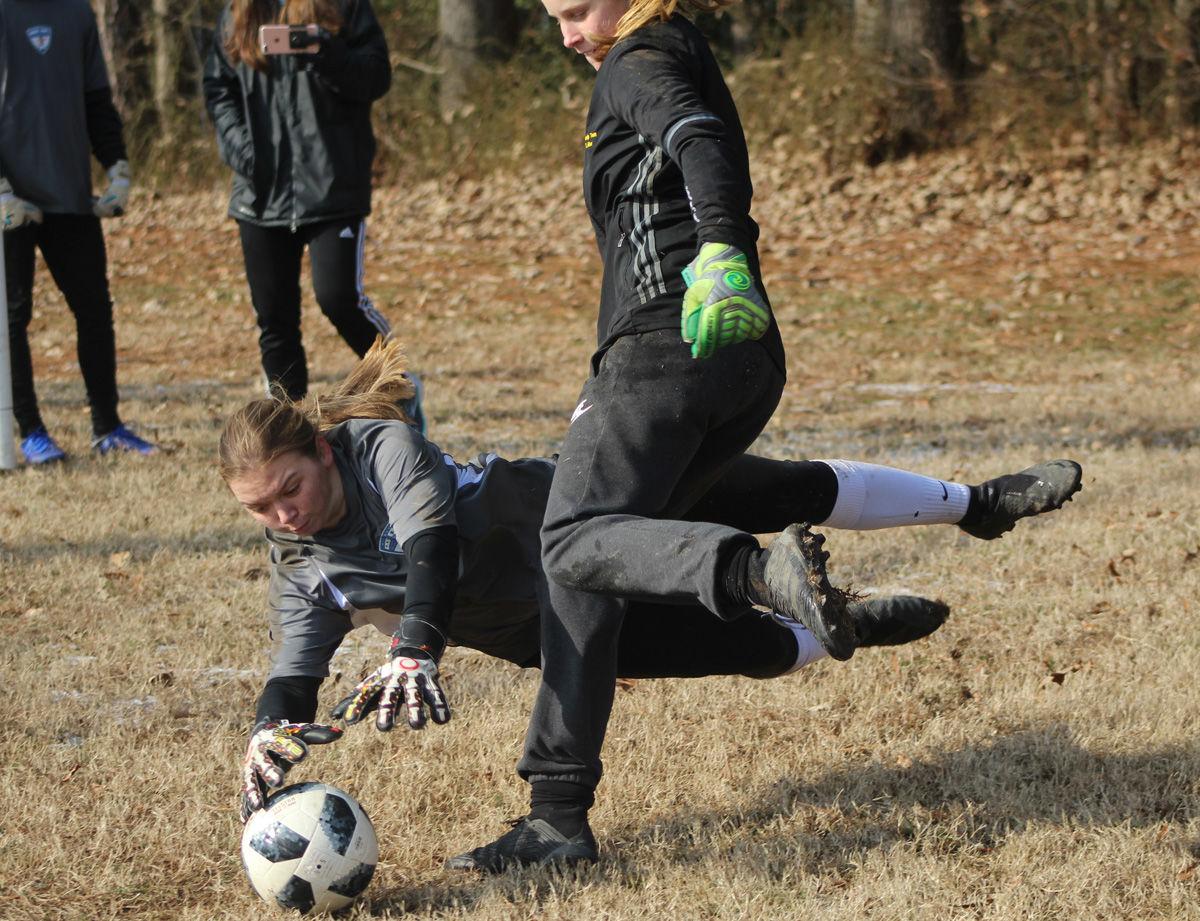 Yulia Hayes dives for the defensive stop at a goalkeeping clinic coached by Samantha Leshnak and hosted by Richmond Goalkeeping Academy in Mechanicsville. 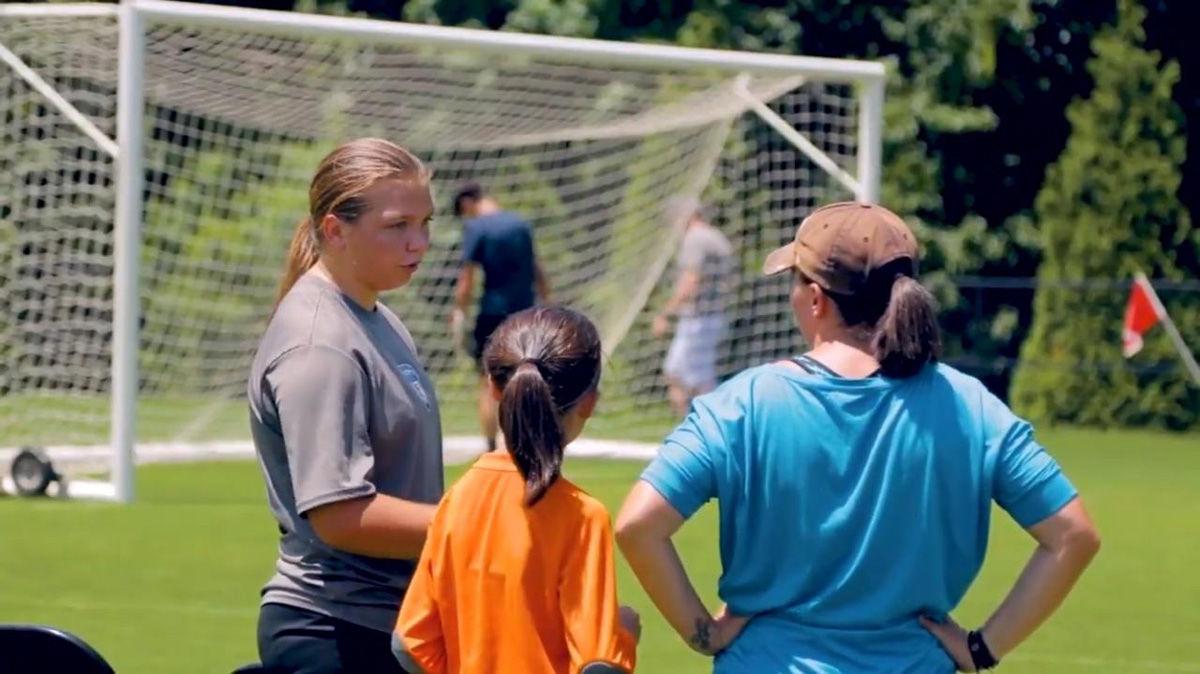 Yulia Hayes (left), who first began playing organized soccer when she was 13, has risen to sign to the NCAA Division I team of The Citadel.

After starting organized soccer when she was 13, Powhatan resident Yulia Hayes is signed to play for The Citadel.

MECHANICSVILLE - They worked through a frigid morning session on a field dusted with powdery snow.

Several student-athletes were participating in a clinic coached by former UNC keeper Samantha Leshnak and hosted by Richmond Goalkeeping Academy. They took on warm-ups and drills, and they channeled what they learned into one-on-one competitions.

The objective was to protect the goal against the striker, and then switch to the role of the striker and challenge the same opponent who was now protecting the goal on his or her side of the field.

The Powhatan resident was quick to make reads on the ball and dive to where the ball would be.

For the most part, participants would rotate out when they were defeated in the one-on-one drill.

That was rarely the case for Hayes. More often than not, she would eventually be told to rotate out to get another student-athlete into the drill, because she kept besting opponent-after-opponent in the competition.

The Banner Christian School student exhibited the ability and skillsets that led to her becoming an NCAA Division I signee to The Citadel.

It’s the kind of path you’d expect a lifelong player to take.

But Hayes has risen to D1 status after only a few years of playing organized soccer .

“I first started playing soccer when I was 13...first time I started getting into soccer, any sport,” Hayes said with a chuckle. “I didn’t like sports when I was younger.”

She first developed an interest in sports when she came to the United States.

“I just wanted to do a sport when I came here,” Hayes said. At first she wanted to do softball, but she couldn’t find a girls team her age, so she started playing soccer.

“I started liking it,” she said. “I never thought I would be able to do sports, because none of my family members or anybody did sports. It was just kind of weird but exciting at the same time, because I get to do something cool.”

Hayes grew up in Latvia, which is located in the Baltic region of Northern Europe.

She endured hardships growing up, but she had friends and she had family who supported her throughout her time there.

For Hayes, last week marked four whole years of living in the USA with her adoptive family.

“I was nervous, I was excited because I didn’t know what to expect...all my emotions were fluttering,” she said, “and I just had fun...I really liked it and I guess that’s when I was like, ‘This is something I want to do.”

She and her Chesterfield United teammates achieved first place in one of the tournaments they played. She played in goal and saved multiple shots, and then she played in the field and scored multiple goals.

Hayes tried every single position across the field - forward, midfield and defender - and said she was left to decide between the two main positions of goalkeeper and striker.

“It just felt right,” Hayes said of her decision to play in goal. “It just felt like something I wanted to do.”

To Hayes, it’s amazing to fly through the air and save the ball, catch the ball in front of your face and run out when a player is coming your way and then get the ball away from their feet.

“Just the look on their faces when you do it is just precious,” she said. “They’re angry and surprised and exhausted at the same time. It’s just amazing.”

Hayes has been training with Amanda Forester and the Richmond Goalkeeping Academy - of which Forester is the owner – for over three years.

When she saw Hayes dive, and she saw her play in 1v1s during their first session together, that’s when Forester knew Hayes had all the potential to go Division I.

Forester worked with Hayes on becoming more coachable and refining her skill sets, and she watched the student-athlete develop into a leader, a great communicator and a person focused on others and giving back.

“It’s humbling as a coach to sit back and watch her and look back at where she’s come from and it humbles me to know that I played a small part in that in her life and gave her an environment to thrive in,” Forester said of Hayes. “She’s got an infectious and contagious personality and is positive, and people walk away always feeling better than they did before, and that’s a gift she has, and I think the biggest thing for me is just seeing her blossom into that and trusting people and trusting others and essentially being the change she wants to see in the world. She went from thinking it to being it, and she is making an impact.”

One year into training at the Richmond Goalkeeping Academy, Hayes suffered an anterior cruciate ligament (ACL) tear and was forced by the injury to sit out for a whole year.

But in the end, she didn’t give up.

“I knew that soccer’s something I wanted to do, so I just kept working harder and harder and...got back in soccer faster than I should have,” she said. “I just pushed through it and got this far.”

In helping Hayes through the process, Forester changed her role as a coach to being her best encourager.

“I just knew and just felt in my heart I had to do this as a coach; I had to believe in her more than she believes in herself,” Forester said. “I knew she had it and I knew an injury wasn’t going to take everything that was in her heart and in her mind…and the physical talent she did have, it wasn’t going to take it away. I had to build her up and keep believing in her so she could believe in herself.”

Forester recalled a brutally hot and humid day in the middle of July. There they both were – Forester and Hayes – on a local high school field. The football team had left out some sleds, and Forester had Hayes push the sled, with Forester standing on the sled, 50 yards across the field.

“I remember her screaming, saying ‘Coach, my knee hurts!’ and I had to yell back at her, ‘No, it doesn’t! It’s just your mind; keep pushing!’ because she was so scared she was going to tear her ACL again,” Forester recalled. “And I just kept telling her, ‘Keep going! Keep going! Keep going!’ And she got to the end and she was about to throw up, and I said, ‘Good. We’re gonna do it again. We’re gonna go back one more. One more. You’ve gotta finish strong always. Finish strong always.”

And Hayes pushed her across.

“And I think that was the moment when she realized it was all in her mind,” Forester said.

The next night, Forester’s brother died in a car accident.

“Honestly she was my motivation to keep coming back amongst my own pain,” Forester said of Hayes. “That’s how I encouraged her, but I also kept myself encouraged…I just didn’t want to let her down, even amongst my own difficulties. She was in my corner as much as I was in hers.”

Hayes would go on to make the elite team with Richmond Strikers and get into The Citadel.

“She’s a tremendous asset and leader and a huge part of the Richmond Goalkeeping Academy,” Forester said. “Every kid in our Academy looks up to her, or they’ve heard so much about her, they can’t wait to meet her, not because she’s celebrity, but because they’ve heard how much she cares and how good she is and how she pushes the other kids.”

During the Academy’s Keeper Wars tournament for their 10-year anniversary last June, Forester remembered how there was one 10-year-old competitor who was struggling with her confidence and also with figuring out the rules of the game. Forester looked at Hayes and told her that the young girl needed help.

“She goes, ‘I got it Coach,’ and she walked over to the goal post and started encouraging her,” Forester said of Hayes, noting how she gave the young competitor a pep talk and tips at halftime, and then stood behind the goal, coaching and encouraging the girl the whole time.

The girl ended up coming back to place third, and she did so by defeating a boy two years older than her.

“When I look up, Yulia’s over there, but now [next to her is] Tallulah [Miller], who looks up to Yulia tremendously…they’re standing there at the goal, both of them encouraging,” Forester said. “That’s when I just realized, for me as a coach, how powerful an example is…it’s like this ripple effect that has happened within our Richmond Goalkeeping Academy.”

Hayes currently attends Banner Christian School. She and her Banner Christian Varsity teammates play well, play together and have fun, Hayes said, and the girls on her Strikers team are “amazing, talented” and play well.

“It’s just fun to be with them,” she said. “It’s like the group of people you always want to be with.”

It was about a year ago when Hayes realized she wanted to go into the military. She was looking into another school as her first option when The Citadel, The Military College of South Carolina, started following her on the Next College Student Athlete website, which connects student-athletes with college coaches, and then invited her to the camps.

She wants to get into Homeland Security, the FBI or a similar field.

“But before that, I’d like to go into Army and serve,” Hayes said, “and then after that go into a field position.”

Hayes’ soccer journey over the past four years taught her: “I’m stronger than I think I am.”

“If I do what I know to do, I’ll just get where I want to get,” Hayes said. “It’s just been amazing to go through this journey because you don’t ever realize how crazy it is and how fun it is to do it until you are in the shoes and doing it.”

Yulia Hayes dives for the defensive stop at a goalkeeping clinic coached by Samantha Leshnak and hosted by Richmond Goalkeeping Academy in Mechanicsville.

Yulia Hayes (left), who first began playing organized soccer when she was 13, has risen to sign to the NCAA Division I team of The Citadel.