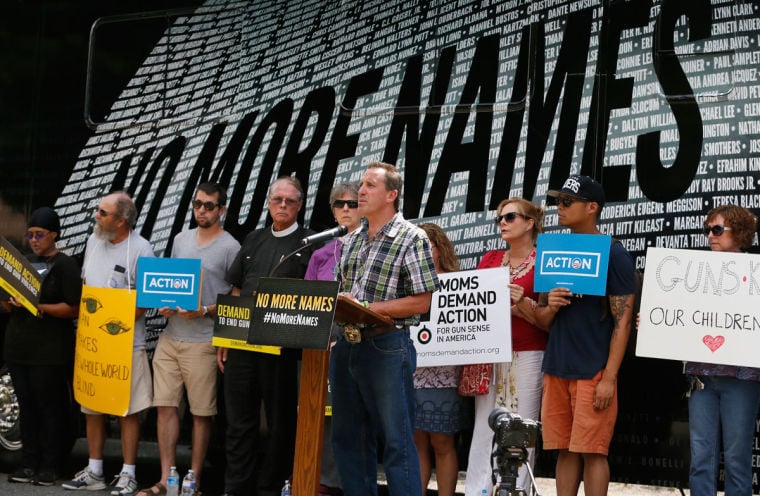 Flanked by local supporters, Neil Heslin,C, father of 6-year-old Jesse Lewis who was killed in the Sandy Hook Elementary School shootings, speaks in favor of expanded background checks during a stop at Shields Lake in Byrd Park, Thursday, August 22, 2013. 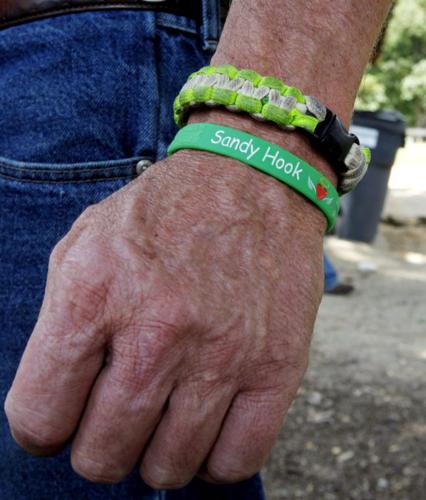 Neil Heslin, father of 6-year-old Jesse Lewis who was killed at Sandy Hook Elementary School in Newtown, Conn., spoke in Richmond in favor of expanded background checks for gun purchases.

The father of a young boy fatally shot in the Newtown massacre last year stopped in Richmond on Thursday as part of a “No More Names” national bus tour to drum up support for universal background checks for gun purchases.

Speaking to a sparse crowd — perhaps 15 local supporters — Heslin said one of the simplest things that could be done “to prevent guns from falling into the wrong hands” is for Congress to pass legislation that would expand background checks for all firearm transactions, including private sales.

“Background checks are not something that’s treading on anybody’s Second Amendment rights,” he added. “It has nothing to do with taking guns out of the hands of law-abiding citizens.

Echoing a repeated complaint from New York City Mayor Michael Bloomberg, whose Mayors Against Illegal Guns organization is sponsoring the 25-state national bus tour, Heslin said many guns that show up on the streets of New York and are used in crimes come from Virginia and North Carolina. “Background checks would help cut down on that,” he said.

In a news release distributed at a rally in Byrd Park, Mayors Against Illegal Guns — citing ATF data — said the number of guns sold by Virginia firearms dealers in 2009 that were trafficked to other states and recovered at crime scenes was 130 percent more than the national average and 422 percent more than in states that require background checks for private handgun sales. The number of firearms was not provided.

Eleven people, nine from the Richmond area, stood behind Heslin as a show of support and held signs that read, “Guns kill our children,” “Demand Action to End gun violence,” and “An eye for an eye makes the whole world blind.”

The group then began reading a long list of names of people killed with firearms since the Dec. 14, 2012, Newtown killings.

The reading of victims’ names has drawn some criticism nationally. At one of the earlier stops in New Hampshire this year, the name of slain Boston Marathon bombing suspect Tamerlan Tsarnaev’s name was read out, prompting several protesters to shout, “He’s a terrorist!

The Washington Examiner, a conservative publication, reported in mid-June that one in 12 of the shooting victims on the list were killed by police or armed citizens in self-defense. A review of 617 killings found that 50 were suspects in crimes ranging from assault to murder, the Examiner reported.

“Somewhere in the neighborhood of 12 to 15 percent of the names that they are reading off are people who were killed while committing a crime with the use of a handgun,” said Paul Henick, a member of the Virginia Citizens Defense League and one of about eight gun-rights supporters who attended the event. “These were people who put others in harm’s way and the only way to stop them was by use of lethal force.”

Henick said he’s not opposed to background checks. But he believes their expansion “wouldn’t have saved more than a very small handful of all the people they’re talking about — including the domestic violence and homicides with guns that were mentioned.”

Thursday’s rally in Richmond coincidentally fell on the same day that a new Quinnipiac University poll was released that showed a majority of Virginia voters don’t like the New York mayor getting involved in Virginia issues related to guns.

Quinnipiac asked voters about Bloomberg’s claim that many of the guns used in crimes in that city come from Virginia. The poll asked whether the Virginia legislature should try to address the issue or if Bloomberg should stay out of Virginia issues.

Fifty-two percent said Bloomberg should not get involved in Virginia issues, while 43 percent said the state legislature should try to address Bloomberg’s guns claim.

“The sizable splits on this question across political, racial and gender lines largely reflect the division of opinion in Virginia and the country on gun-control matters,” said Peter A. Brown, director of The Quinnipiac Polling Institute.

Jim Bennett of Richmond, who showed up at the rally in support of tighter gun regulations, said he’s not opposed to people having or using guns.

“I’m opposed to the stupidity that ensues when almost anybody can walk around with a gun at any time,” he said. “And I’m opposed to a lack of response by our legislators. I think they’ve given in too easily to the NRA lobby.”

Bennett said the existing background-check system needs to be overhauled. “There should be much more oversight of gun transfers — selling between people,” he said. “The right to own a gun doesn’t trump everybody else’s right to be safe.”

The Rev. David Knight, an Episcopal priest whose 21-year-old son was slain with a gun 16 years ago during a botched robbery at a Friendly’s restaurant in Henrico County, agrees.

“We’re not trying to take people’s guns away,” Knight said at the rally. “I think we can be united as a country in preventing gun violence. It’s not about gun control, it’s more about commonsense gun-safety legislation.’

But Knight wasn’t sure whether the proposed measures would have saved his son’s life.

“It’s a hard question to answer,” he said. “Jamie’s shooter bought his gun illegally in a 7-Eleven parking lot out of the trunk of somebody’s car.”

Arrests of illegal buyers at Va. gun shows trending up

Flanked by local supporters, Neil Heslin,C, father of 6-year-old Jesse Lewis who was killed in the Sandy Hook Elementary School shootings, speaks in favor of expanded background checks during a stop at Shields Lake in Byrd Park, Thursday, August 22, 2013.

Neil Heslin, father of 6-year-old Jesse Lewis who was killed at Sandy Hook Elementary School in Newtown, Conn., spoke in Richmond in favor of expanded background checks for gun purchases.