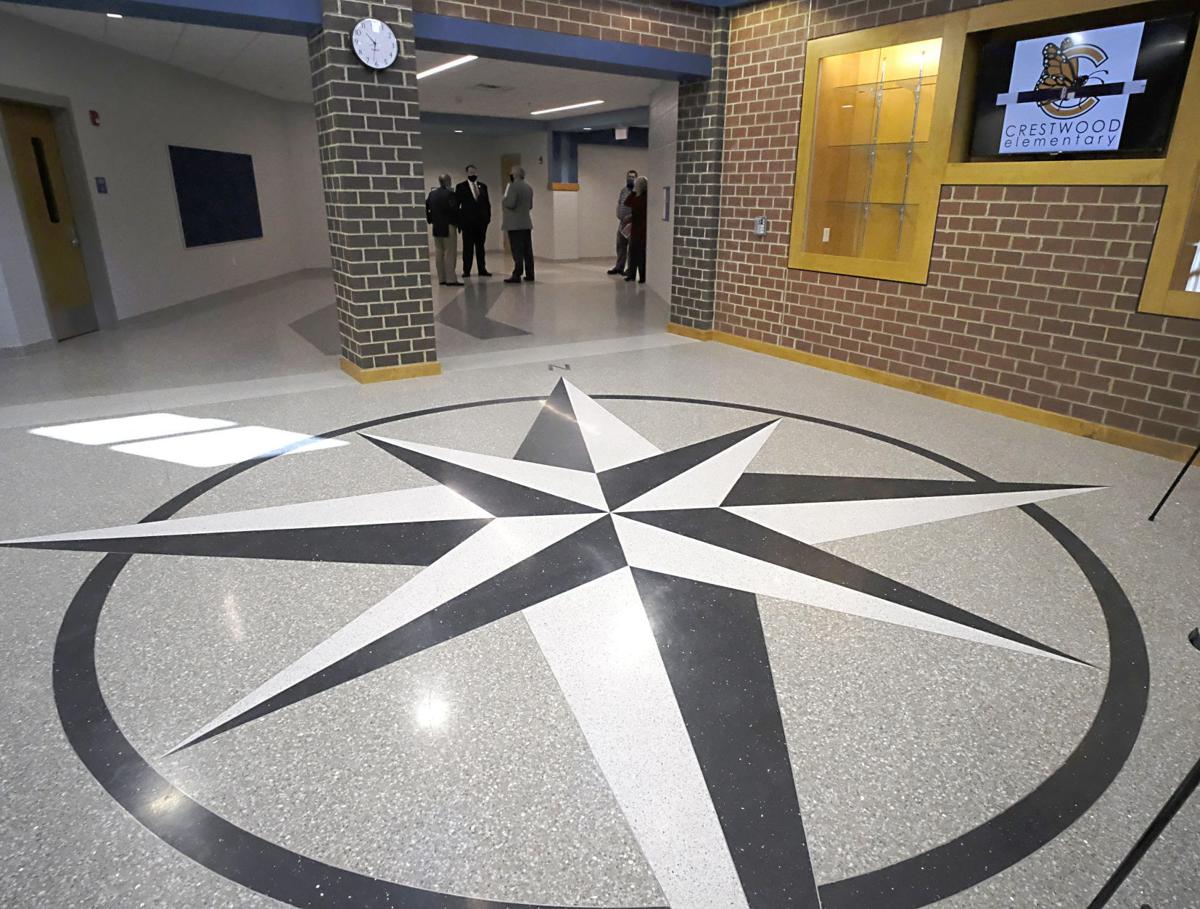 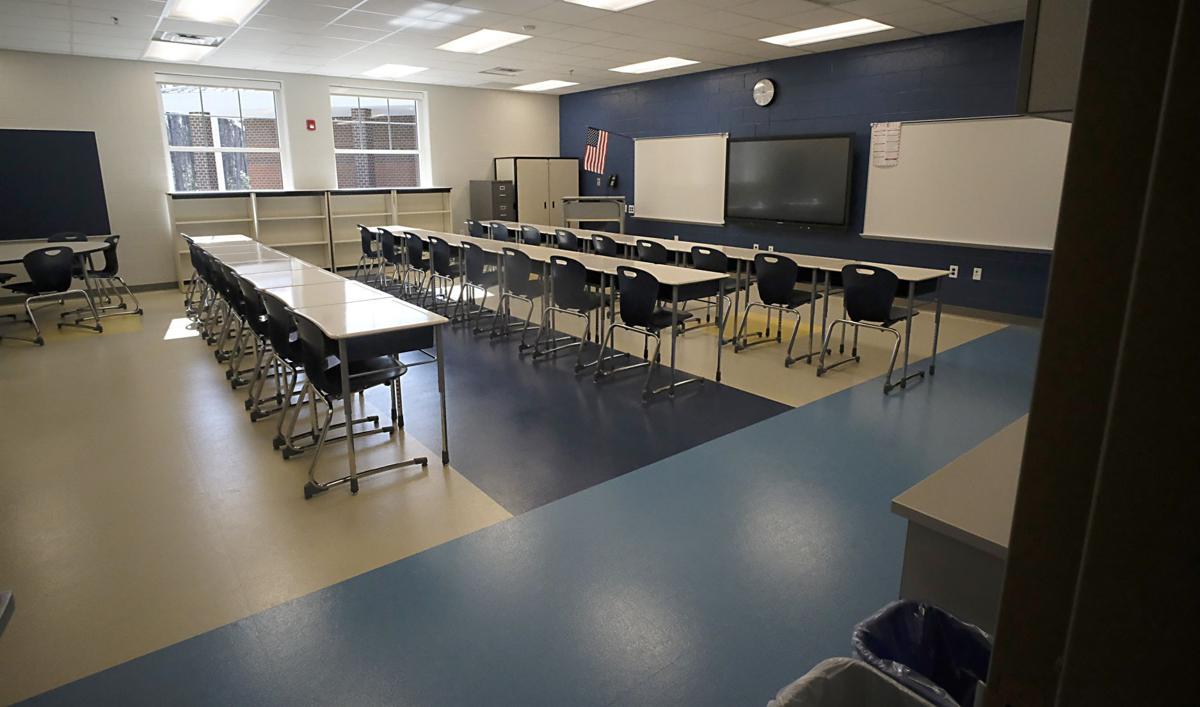 One of the classrooms inside the brand new Crestwood Elementary School in the Midlothian District of Chesterfield County, VA Monday, March 29, 2021. Teachers, students and staff will move into the building on April 13. 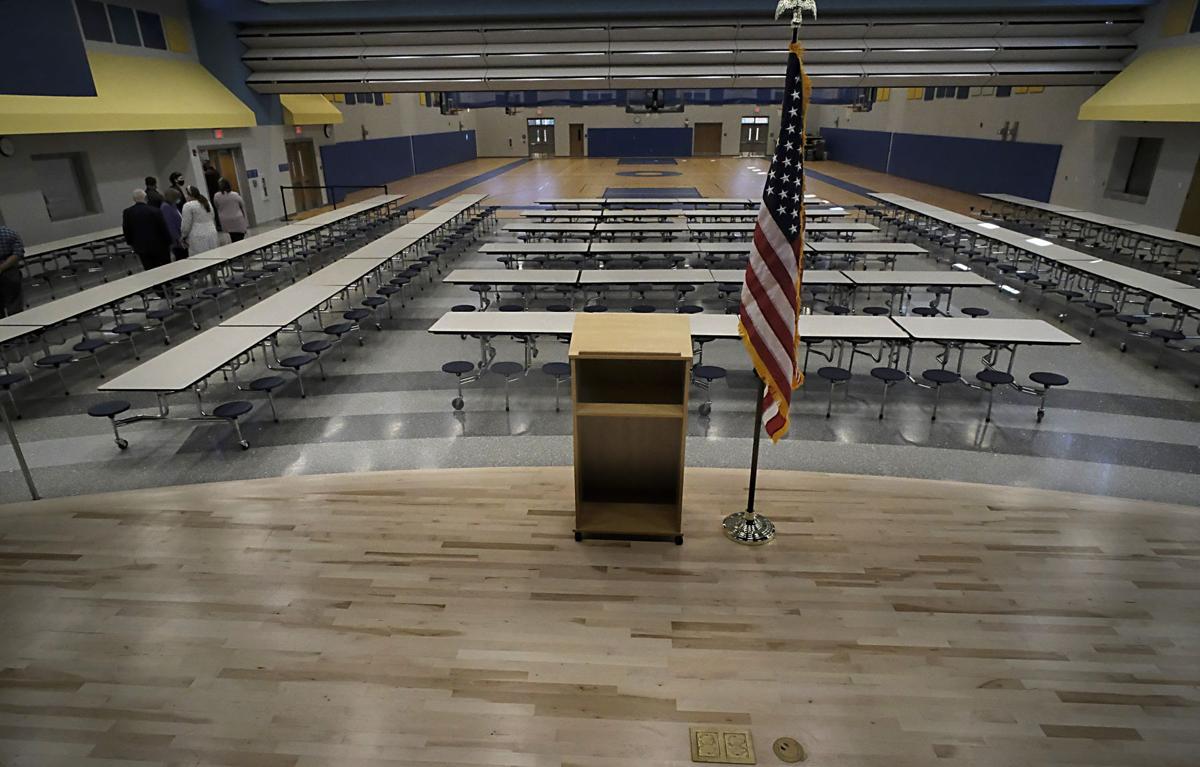 A stage, cafeteria and gymnasium are seen inside the new elementary school in the Midlothian District. 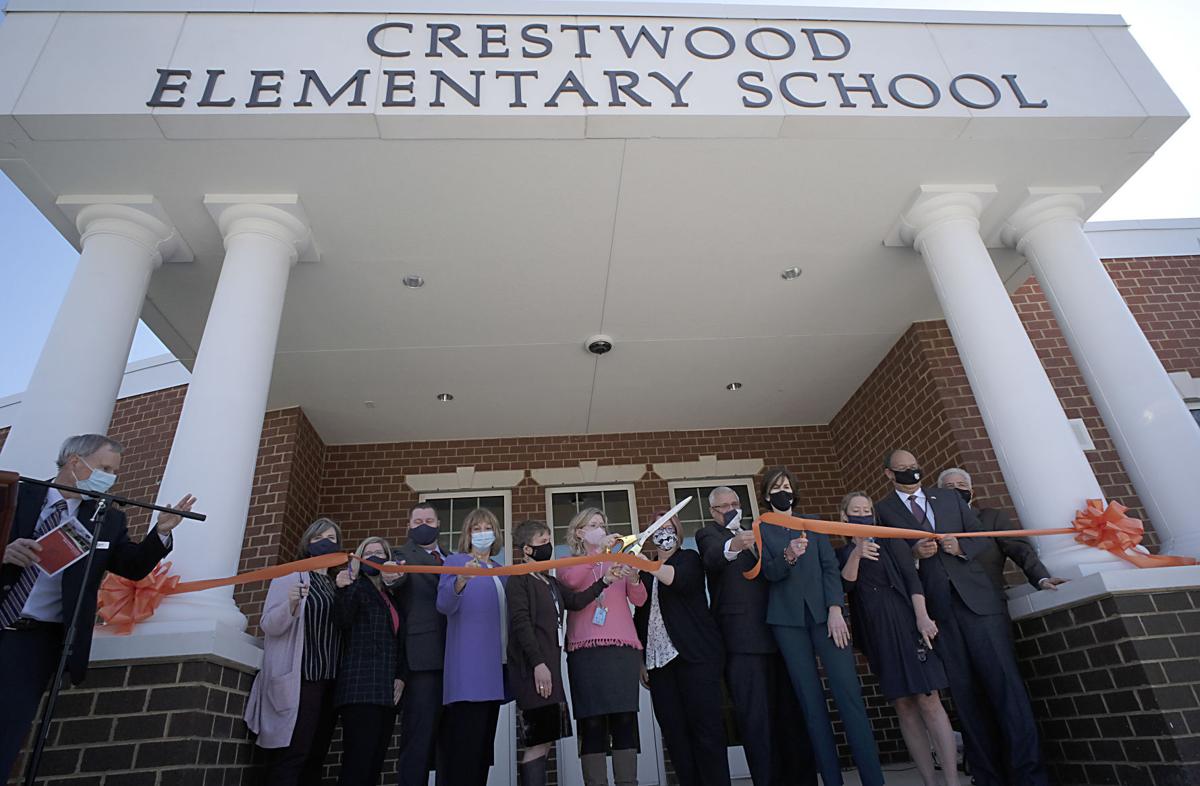 Jack Clark (left) with RRMM Architects counted down as Chesterfield County school and administrative officials cut the ribbon for the new Crestwood Elementary School on Monday. The school can house approximately 750 students.

For the past two school years, Crestwood has made a temporary home in trailers at Bon Air Elementary so a new school could be built on its grounds.

“You’ll say well, ‘Why would we do this in April? Why don’t we wait until the end of the school year?’ Now, when you think about the excitement and what we’ve been through over the past year, this is a shot in the arm,” schools Superintendent Merv Daugherty said during a virtual ribbon-cutting for Crestwood on Monday morning.

The district, like school systems across the globe, has been navigating educating its students during the coronavirus pandemic.

Last month, elementary students had the opportunity to return to school five days a week, followed by middle and high schoolers earlier this month.

While construction plans for Crestwood were created before the pandemic came along, the school division has implemented measures to eliminate high-touch surfaces, including updating light switches and sinks.

The bathrooms have automatic toilets and touchless sinks and lights. There are partitions between each sink to help with social distancing. In the kindergarten/first-grade wing, each classroom has its own bathroom.

Nestled in Crestwood Farms, a midcentury subdivision, the original school opened in 1962. When conversations began about tearing down the school and replacing it, the community responded with hesitation and concern.

Mary Fain, Crestwood’s former PTA president who has a second-grader in the school, said that in the beginning, families’ attachment to the old building created hesitation for being on board with it coming down.

“Crestwood prides itself on being a community school,” Fain said. “Change is hard. Hopefully [the families] will love the new school as much as the old one.”

“Our school is the consummate neighborhood school tucked in here quietly in a cul-de-sac surrounded by homes and woods,” Porzio said. “[The neighbors] have supported us like a family member for the last, almost 60 years.

“We appreciate your patience and grace during this construction, and hope that this brand-new school is something that we can all be very proud of.”

A replacement Crestwood Elementary found its funding in the $402 million bond referendum in 2013. Originally planned to be $304 million, the bond plan expanded to pay for the replacement of eight older Chesterfield schools and a brand-new Old Hundred Elementary, which opened in September 2019.

Renovations to Monacan High and Providence Middle as well as replacement elementary schools for Beulah, Enon, Matoaca, Harrowgate and at Manchester Middle have been completed and were paid for through the 2013 bond referendum.

School Board member Kathryn Haines, who represents the Midlothian District, said Crestwood’s opening is more than just a new school building, as it “symbolizes a commitment to equity and educational opportunities across our entire school district.”

For the past two years, Crestwood has been operating out of “mega trailers,” consisting of three trailers with 12 classrooms, one with 10 classrooms and the final one as the cafeteria, said Chief Operations Officer Josh Davis.

With Chesterfield’s 64 schools, some are old, even in the 100-year range, with others in the 50-year range already showing their age, Haines said.

“[It] remains important that the School Board and Board of Supervisors continue to invest in our older facilities or replace them when necessary,” she said.

One of the classrooms inside the brand new Crestwood Elementary School in the Midlothian District of Chesterfield County, VA Monday, March 29, 2021. Teachers, students and staff will move into the building on April 13.

A stage, cafeteria and gymnasium are seen inside the new elementary school in the Midlothian District.

Jack Clark (left) with RRMM Architects counted down as Chesterfield County school and administrative officials cut the ribbon for the new Crestwood Elementary School on Monday. The school can house approximately 750 students.