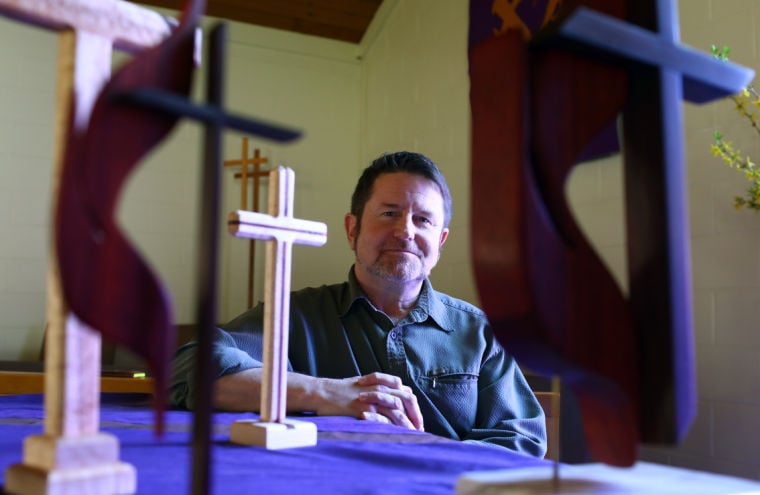 Thomas D. Gober of Richmond has made more than 1,200 crosses in 14 years. He donates them to churches and individuals — some of whom are strangers. He is shown with some of his handmade crosses at Huguenot United Methodist Church in Chesterfield County. 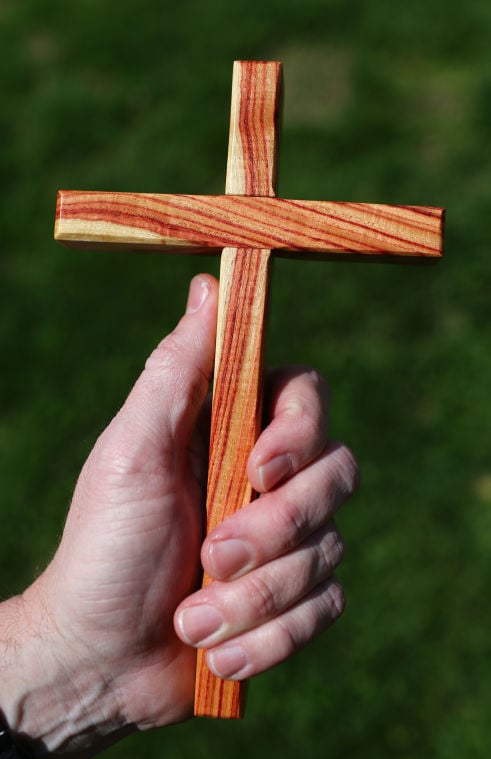 Tom Gober of Richmond has been making over 1,000 crosses for 14 years and he donates those to churches. He shows one of crosses, which he made.

If you’re an insurance company executive who has stolen millions — if not billions — of dollars from customers to finance a lavish lifestyle, chances are pretty good you’ve heard of Tom Gober.

He’s the forensic accountant who dug through your records and figured out just how your scheme worked, then explained it — in his aw-shucks way — to a federal jury.

If you’re not one of those guys, Gober’s name is one you’ll probably never hear.

Unless you are ever down and out or if you are going through a tough time or you just happen to run across the nonassuming Gober and he gives you one of his handmade crosses.

Thomas D. Gober, as prosecutors and defense attorneys know him, is a Richmonder who has been making homemade crosses in his garage for 14 years and giving them to anyone who needs or wants one.

The crosses are made from hardwood and range from an inch tall to upward of 13 feet. They can be found tucked away in pockets or planted in front of churches.

By Gober’s count, he’s made and given away about 1,200 across the country.

“It is my therapy. Sometimes, I just get sick by what I find,” Gober said. “When it gets to be too much, I just slip into my garage, take some wood and make it into a cross for somebody.

“I consider it my hobby and my spiritual vocation.”

Gober has investigated hospitals for Medicare fraud, consulted with the FBI and the U.S. Attorney’s Office on criminal investigations within the insurance industry and has testified on cases involving mail and wire fraud, money laundering and asset forfeiture.

He consulted with federal authorities in 2005 on issues at AIG, while working another criminal case. In 2008, after the insurance giant collapsed, he began investigating the company on civil matters.

Making the crosses is a spiritual timeout from that work — a way for Gober to take a break from the difficult task of sorting through thousands of documents and chasing criminals.

“It’s almost as if I witnessed a murder that no one else saw,” he said. “I feel like it’s my job to complete the investigation and get something done about it.”

“But there is a frustration that I’m aware of this terrible, huge dollar amount scheme. So I step into the garage and start with a board, and when I finish, it’s a one-of-a-kind unique cross. … That process has become more and more spiritual to me over the years.”

But Gober said the real reward lies when he gives them away. Sometimes, those crosses go to churches, sometimes to individuals he’s been told are in need and sometimes to strangers.

“It’s enjoyable making one not knowing who it’s for,” he said, adding that he’s careful not to offend people who don’t believe or follow another religion.

To avoid that, Gober will sometimes take a cross he’s close to finishing to a coffee shop and start sanding it down. If someone stops to ask where he got it and how much it cost, he tells them he made it.

“Sometimes, I have one handy and I just give it them. It’s a real joy,” he said.

Whether giving a cross to a stranger or someone who asked for it, he said the sentiment is the same: The crosses are his way of passing along a blessing.

The Rev. Peter R. Falbo, pastor at Huguenot United Methodist Church, said Gober has given the church about four crosses and “quite a few” to parishioners.

“Tom is so good when he hears about somebody’s story or need,” Falbo said. “He does them all uniquely and thinks about how the cross would be meaningful — maybe the color or the wood. That kind of thing.”

“It isn’t just about making it and giving it to them. There’s some really compassionate thought” that goes into it.

Gober made his first cross about 14 years ago for his dad, a Methodist minister for 52 years. His father liked the gift and asked him to make another for a colleague.

Gober said he knew that he was onto something special after he’d made seven or eight crosses. He was asked to make one for a woman who had gotten some bad news about a parent with cancer.

“When I gifted it to her, I felt like it really did something for her,” he said. “I just felt like it made a difference.”

Since then, he’s been working steadily on the crosses and can make as many as five a week.

The Rev. William Noe, a priest at Sacred Heart Catholic Church in Richmond, met Gober when he came to get a blessing for 14 crosses he made to go above each station of the cross for a local Catholic high school.

Noe said one of Sacred Heart’s two processional crosses had fallen over a few months earlier and shattered. The church didn’t have the means to replace it with something of the quality the church would have preferred.

So Noe asked Gober if he’d make a processional cross for Sacred Heart. It was finished three days later.

“It’s really beautiful. A cross of that quality would cost us thousands of dollars, so we were very grateful for his gift,” he said.

Each cross is made from handpicked pieces of hardwoods. He only uses wood where the grain is already beautiful or if there is a natural beauty to the wood itself.

The most common is bird’s-eye maple.

There is not a single style for the crosses he makes. They range from standing crosses — made using embedded or hidden magnets — to wall-hanging crosses that merge two crosses to large outdoor crosses for a church’s front lawn.

“That this work, this art that he does, comes from his own life makes it real for us in a way that a manufactured cross would never be,” Noe said. “This comes out of his own dedication to justice and working so that people can have a life with less pain.”

Making a ministry of handmade crosses

Faith & Values: From darkness to light

Faith & Values: Jesus and the scapegoat

Thomas D. Gober of Richmond has made more than 1,200 crosses in 14 years. He donates them to churches and individuals — some of whom are strangers. He is shown with some of his handmade crosses at Huguenot United Methodist Church in Chesterfield County.

Tom Gober of Richmond has been making over 1,000 crosses for 14 years and he donates those to churches. He shows one of crosses, which he made.