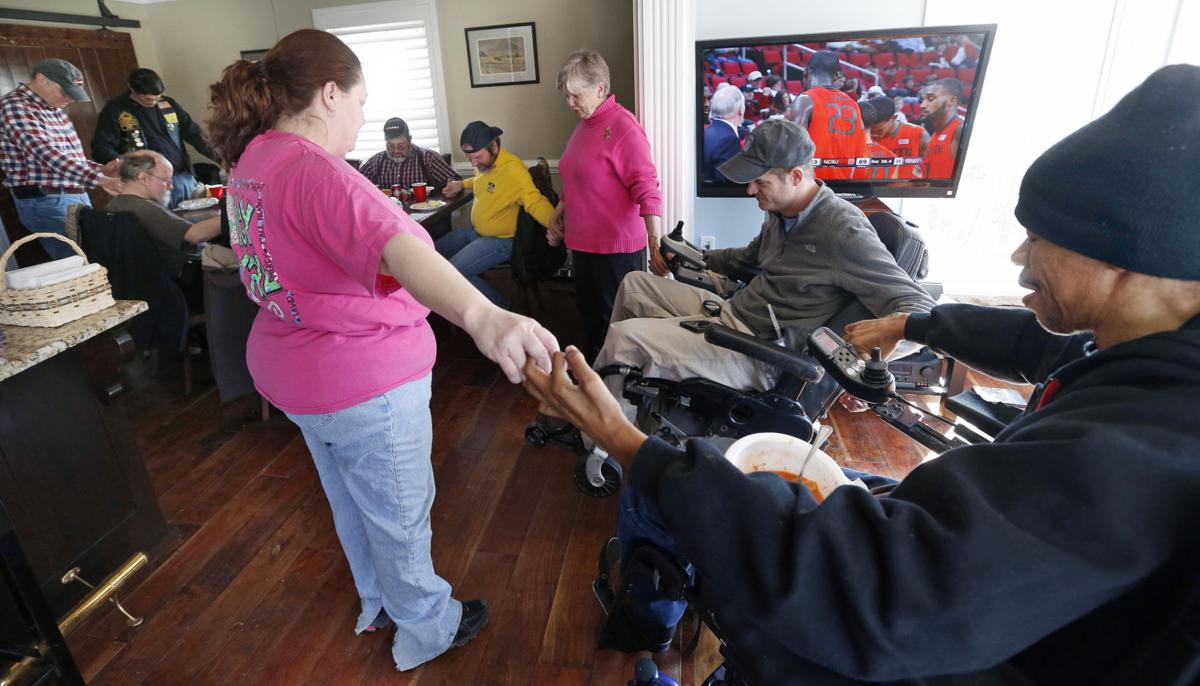 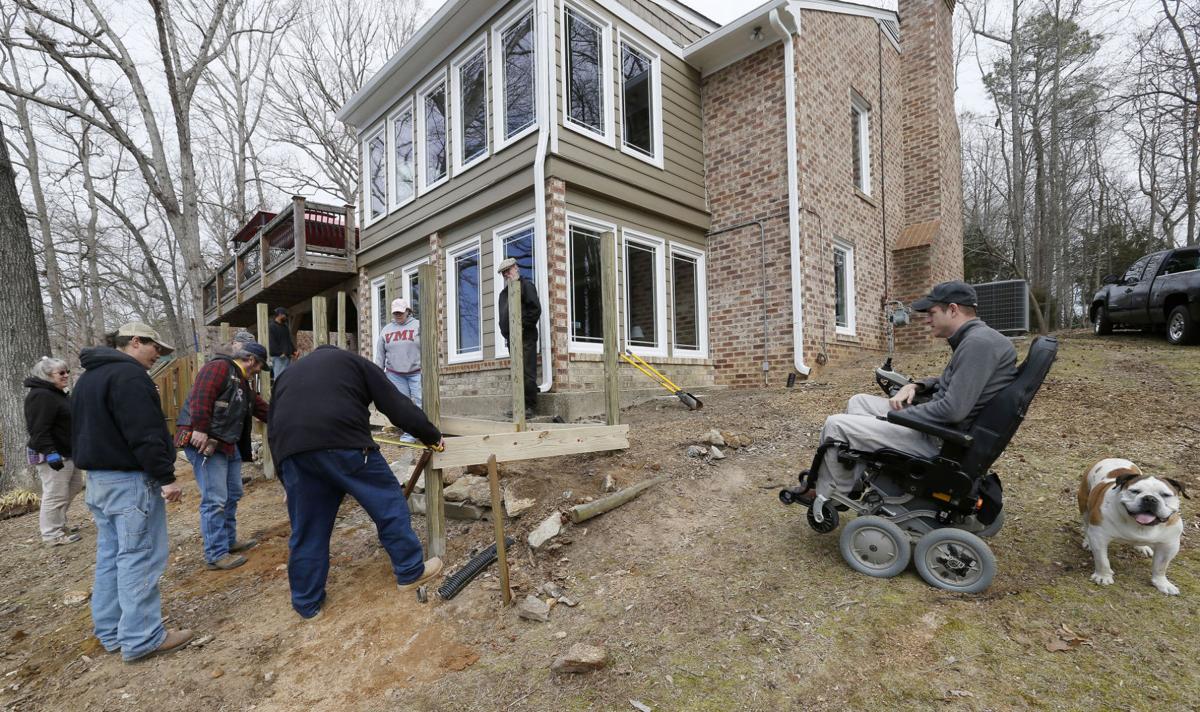 James Howard watches as members of the Hogs and Heroes Foundation build a ramp at his home Saturday, March 1, 2014. 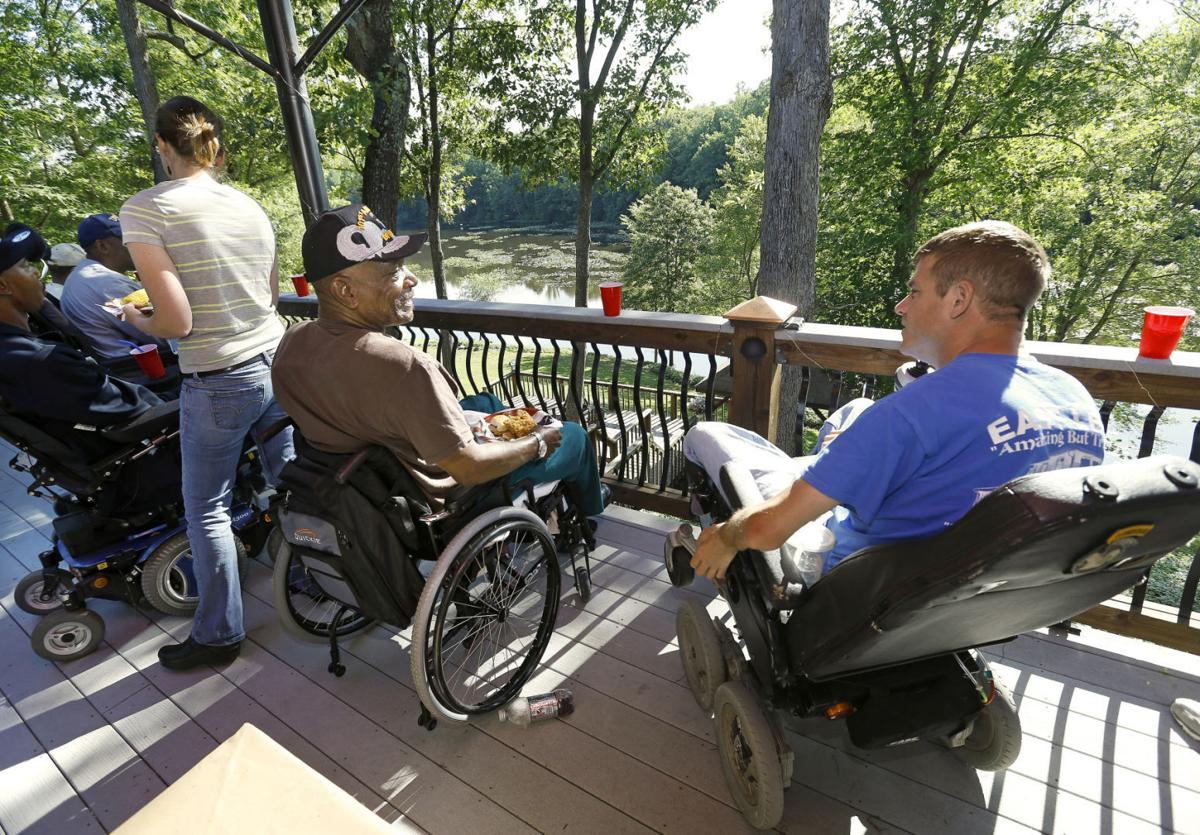 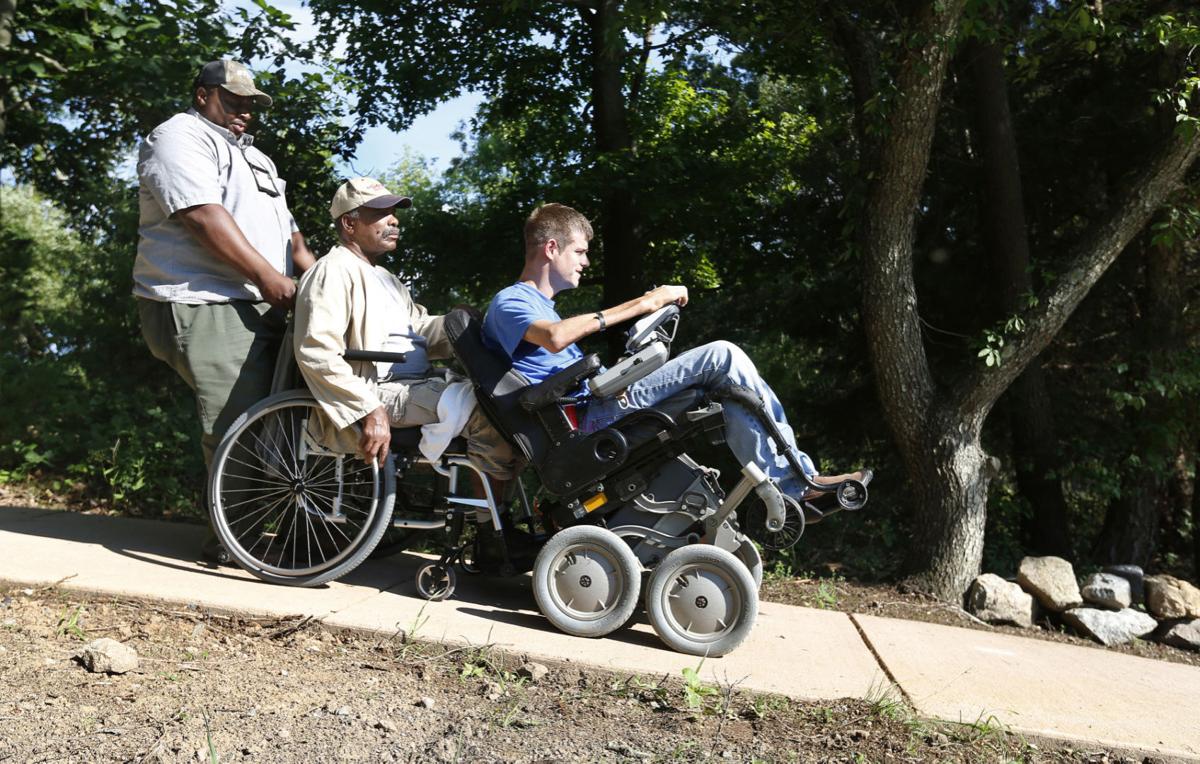 James Howard helps slow down Vance Sutphin's wheelchair as Anthony Pendergrast guides it as they descend to the fishing dock during a retreat at Howard's home for veterans from McGuire VA Hospital's Spinal Chord Injury Unit Thursday, June 5, 2014. Nancy Wellons, James' mother, carries the fishing pole. Pendergrast is a bus drive at the hospital. 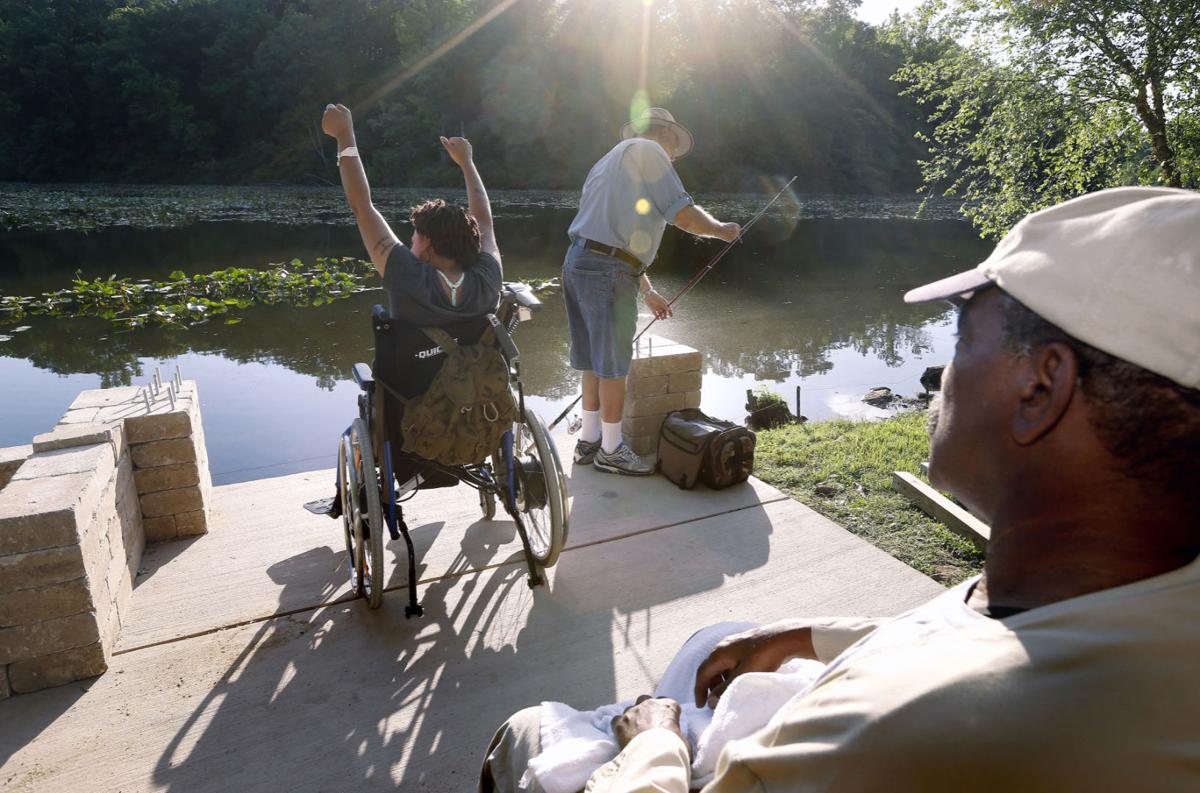 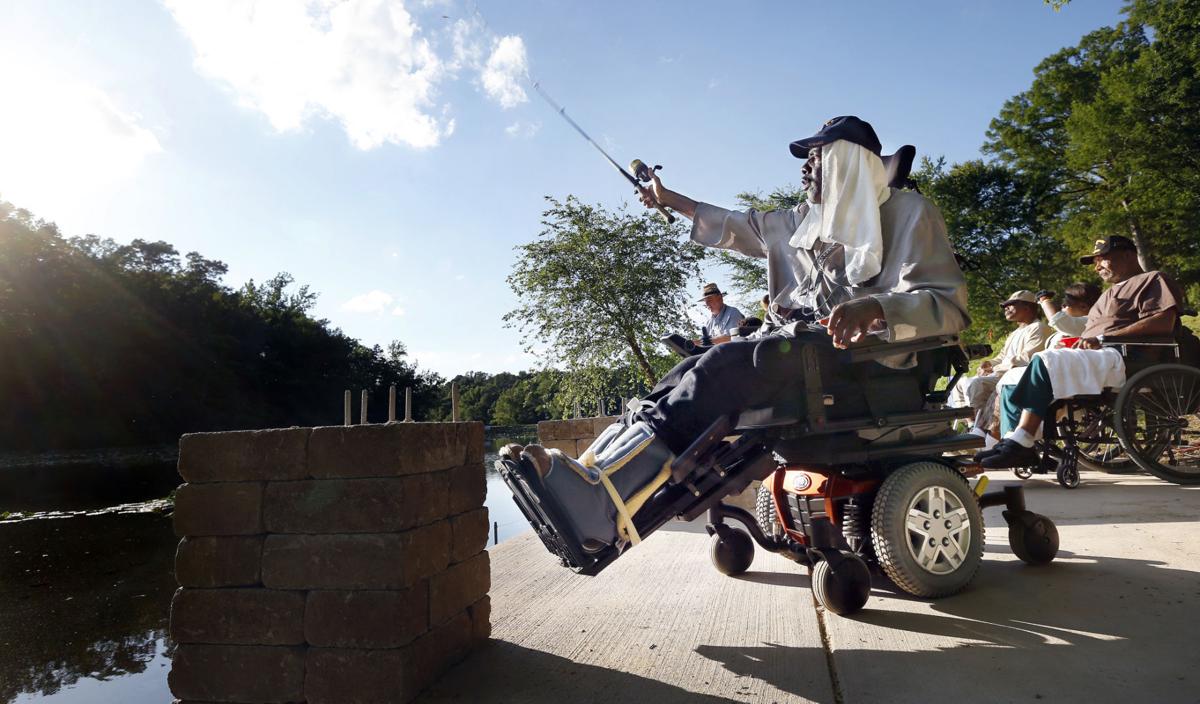 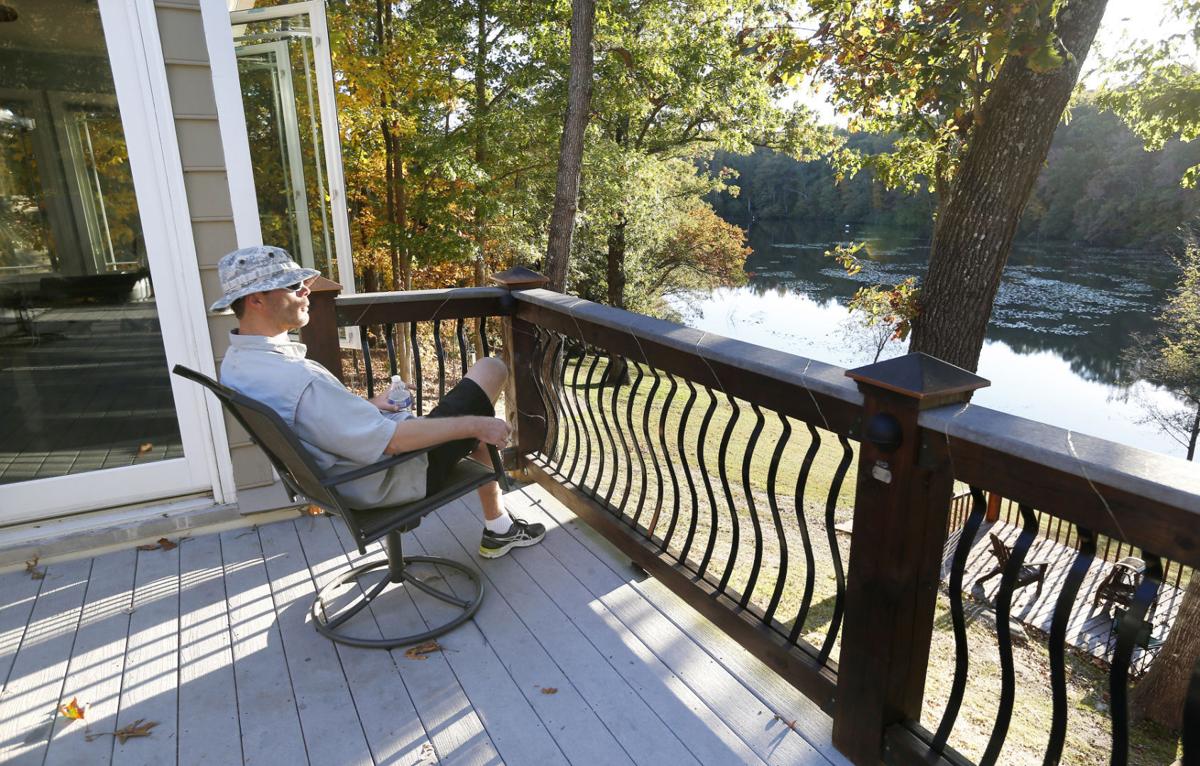 Chris Lynch, who served in the 82nd Airborne with James Howard, relaxes at his friend's Chesterfield home Monday, October 27, 2014. He had a traumatic brain injury while serving. 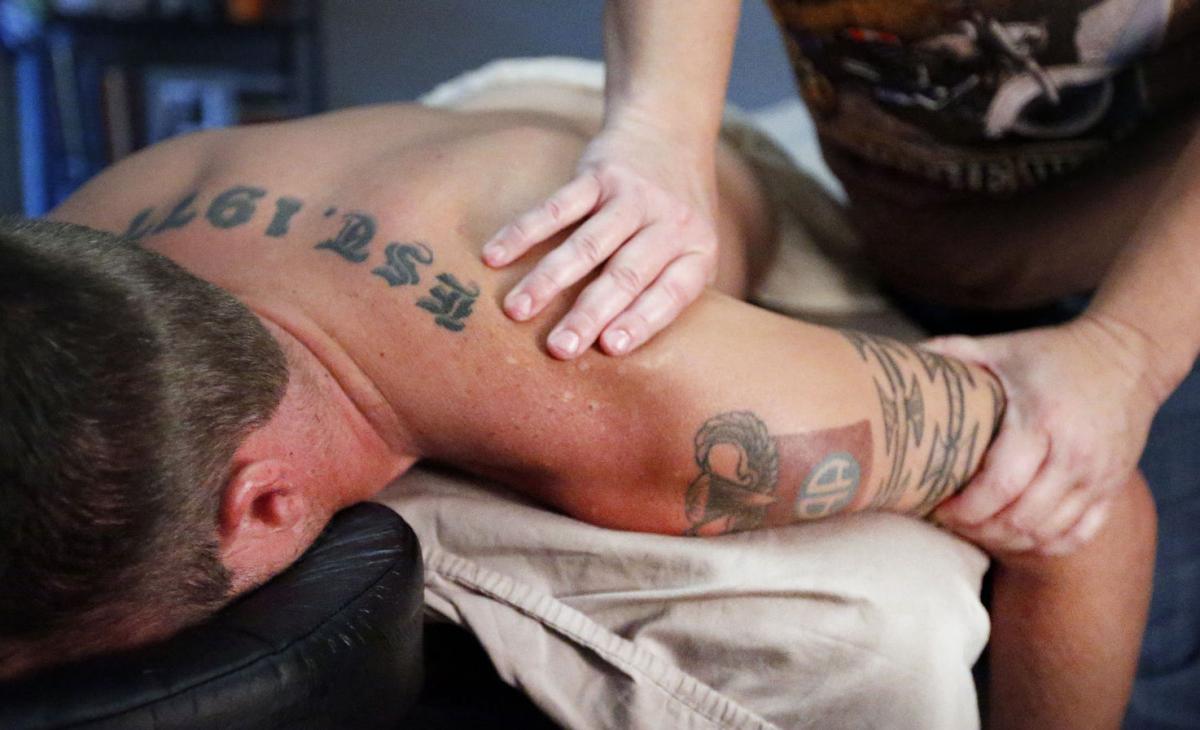 Certified massage therapist Tomi Woodward gives Chris Lynch a massage Monday, October 27, 2014. Lynch was visiting James Howard who has set up his Chesterfield home as a retreat for veterans. Lynch, who had a traumatic brain injury while servinng, was in the 82nd Airborne with Howard.

W heelchairs line the edge of Gregory’s Pond in Chesterfield County; some of their occupants carry fishing poles, others take in the view or relish in their shared military history that brought them to this peaceful shore.

Clusters of lily pads are scattered across the water on the mild summer day, and the setting sun is in full view. It’s a stark contrast to the hospital setting most of these veterans endure day after day for tests, treatments and therapy.

Up the hill, Army veteran James Howard chats with other disabled veterans in his own motorized wheelchair by the grill on the back deck of his home he has opened for this purpose: to provide a retreat for veterans and their families and facilitate an open community of fellow disabled veterans learning to live post-injury.

“That’s what this place is for: to help people who need a hand,” Howard said. “Getting them together with other people with the same condition ... learning from each other is the best medicine.”

Keya Choate is fishing for the first time with the help of Howard’s neighbor, Garland Farnsworth. She is part of McGuire Veterans Affairs Medical Center’s Spinal Cord Injury Unit that takes disabled veterans injured within the past three months to Howard’s house at least once a month.

To her surprise, she feels a tug at the end of the line after a few casts. Amid her laughter and cheers from her fellow veterans, Farnsworth coaches her on bringing in her first catch. She releases it after a few pictures as proof of her feat and gets right back to casting for her next victory.

“I don’t get to go out a lot,” Choate said later, adding that the wheelchair she is borrowing from the hospital until she receives her own has helped her mobility. “I’m able to sit down here in the heat without it hurting.”

Howard’s home, which is less than 10 miles from McGuire, is a place where patients can see an example of an active life with a spinal cord injury as they practice the skills they’ve learned in rehabilitation at the hospital.

“There’s a whole lot of life left after injury,” recreation therapist Whitney Mayer said. “It’s easy for us to say, but it means a lot to them to hear from someone who has done it.”

Howard takes the veterans around his home, showcasing his roll-in shower, wheelchair-level microwave and other modifications to his home, sharing advice on adjusting to the “new normal.”

He also talks about the adapted sports he has participated in with other disabled veterans through his nonprofit Veterans & Athletes United: skiing, kayaking, skydiving, horseback riding, weapons shooting range, surfing, scuba lessons, hunting and fishing.

“There are still ways to do the things you love,” Mayer said she tells patients. “It’s going to be different, but it’s still possible.”

Their trips to Howard’s home prepare patients for re-entry into the community and serve as a stress reliever, said recreational therapist April Mizell.

“When our patients go out there, they’re comfortable,” she said, adding that many injuries heighten the anxiety for those with post-traumatic stress disorder.

Howard said that when he was in the hospital for two months after a service-related diving accident that caused him to lose nearly all the mobility in his arms and legs, he and other patients would sometimes have a cookout in the hospital parking lot, “just to get some fresh air and sun.”

“It’s good for your sanity, to maintain sanity,” said patient Darius Benbow, who visited Howard’s house recently. “Being at the hospital is just doctors and nurses and medicine.”

“I’ve been in the hospital for seven months. He knows how we feel,” said Jerry Barnette. “It’s great he can do something like this.”

Howard bought his home in October 2013. There’s a pull-down screen and projector for movies, a fully accessible kitchen with an indoor and outdoor dining area, and a basement apartment for families traveling with their veteran to the hospital to get some needed rest and relaxation.

His grandfather served in the Korean War, his great-uncle fought in World War II, and his cousin is a colonel in the Marines. One room in his home is devoted to his collection of knives used in combat dating to the Civil War and family military heirlooms, including a pistol used by his grandfather in Korea. Howard graduated from Virginia Military Institute in 2002 and entered the Army as a lieutenant, which included time at Fort Bragg and Army Special Forces.

After his accident, he retired as a captain in 2010. When he was well enough to go home, it was daunting and, at times, overwhelming to adjust to life in a wheelchair. He spent eight years in the Army and never imagined doing anything different, he said.

“I never swallowed the fact that I’m not in the military doing a job I enjoyed doing,” he said, adding his work as an Army ranger tested his physical and mental breaking points.

Howard gradually replaced that job with participating in or running half a dozen nonprofits related to assisting veterans or others with disabilities.

“I learn something from everybody who comes through there,” he said. “It’s rewarding and helps me move forward with my life and my injury. In a way, we’re taking care of our own and helping each other out.”

James Howard's mother Nancy Wellons started a Lynchburg chapter of AMBUCS, a national nonprofit that customizes tricycles and bicycles for people with disabilities especially children, in 2011 called Wheels on the James, a tribute to the Virginia river and her son's name after his accident.

AMBUCS also fashioned a tricycle for Howard that he rode for 10 miles in his first event. His hands were attached to the handlebars and he pushed with his shoulders, giving him an avenue back to an active lifestyle.

"It's because of him I started that chapter...People had been so good to him," she said. "All (his military training) helped him deal with his medical issues and meeting the challenges of everyday life," after his accident.

Howard started a Richmond chapter earlier this year, REACHcycles, which stands for Richmond Empowering Abilities for CHildren with cycles. So far, the chapter has fitted and given tricycles to about 30 children and soon a veteran.

"Watching a kid get a bike puts things into perspective," he said.

US to require COVID-19 shots for foreign visitors

US to require COVID-19 shots for foreign visitors

Last week, Danielle Jones went to get a personal loan with a 36% to 40% interest rate from Check City on West Broad Street in Richmond. It’s t…

Around 100 small-business owners from Virginia joined Sen. Joe Morrissey, D-Richmond, for a news conference Monday to highlight the negative i…

Thanks, but no thanks.

James Howard watches as members of the Hogs and Heroes Foundation build a ramp at his home Saturday, March 1, 2014.

James Howard helps slow down Vance Sutphin's wheelchair as Anthony Pendergrast guides it as they descend to the fishing dock during a retreat at Howard's home for veterans from McGuire VA Hospital's Spinal Chord Injury Unit Thursday, June 5, 2014. Nancy Wellons, James' mother, carries the fishing pole. Pendergrast is a bus drive at the hospital.

Chris Lynch, who served in the 82nd Airborne with James Howard, relaxes at his friend's Chesterfield home Monday, October 27, 2014. He had a traumatic brain injury while serving.

Certified massage therapist Tomi Woodward gives Chris Lynch a massage Monday, October 27, 2014. Lynch was visiting James Howard who has set up his Chesterfield home as a retreat for veterans. Lynch, who had a traumatic brain injury while servinng, was in the 82nd Airborne with Howard.