Christmas tree shortage impacts Richmond-area; supply is down, prices are up and some nurseries are sold-out, but trees can still be found
0 Comments
Share this
1 of 5 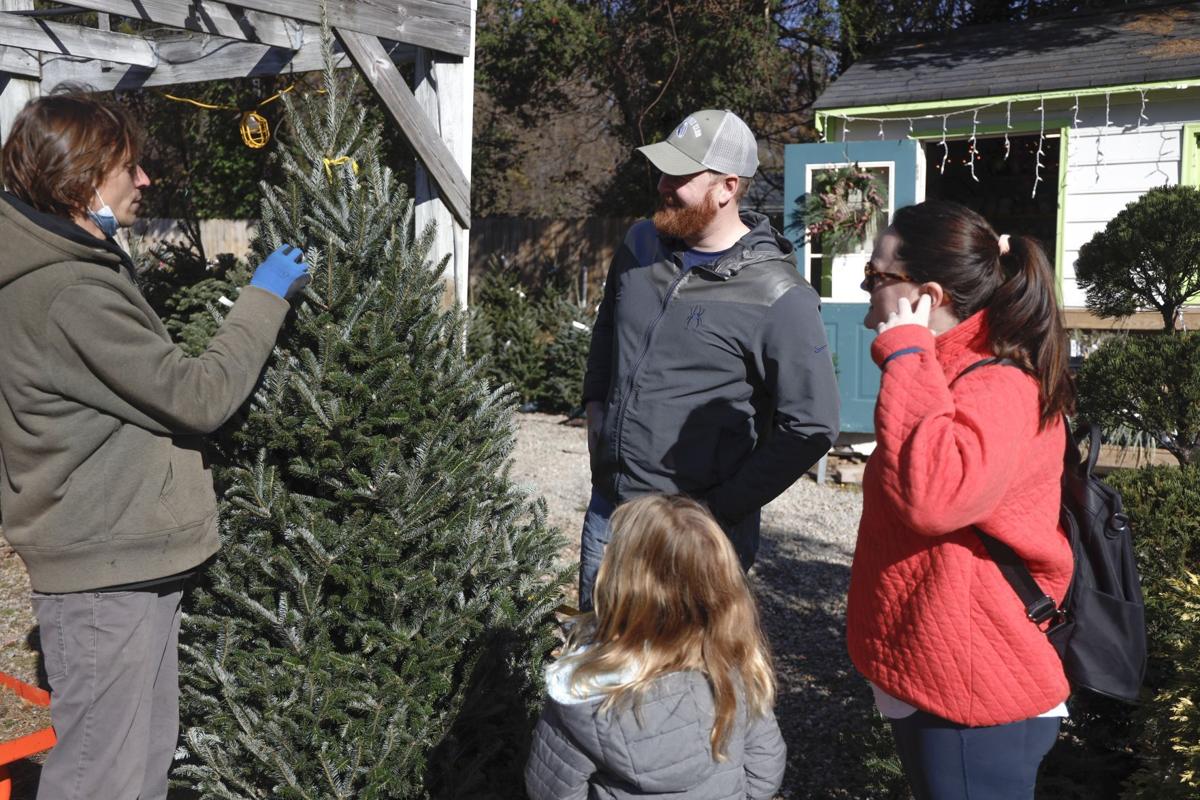 At Sneed’s Nursery in South Richmond, Josh Simon helped Zach Butler, daughter Hazel, 6, and their family friend Megan Dooley choose a Christmas tree on Saturday. The nursery has sold all of the trees it had in the 5- to 10-foot range. 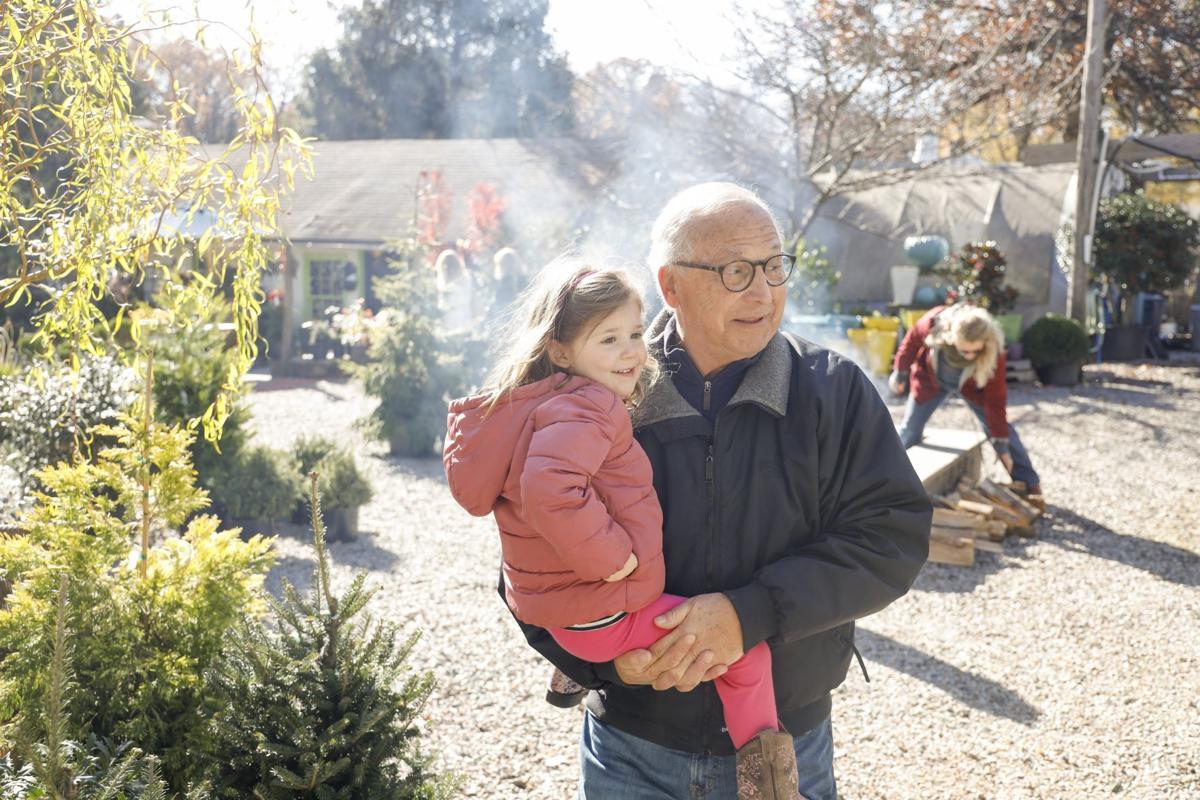 Todd Hannan held Poppy Butler, 4, as they shopped for a Christmas tree on Saturday at Sneed’s Nursery. 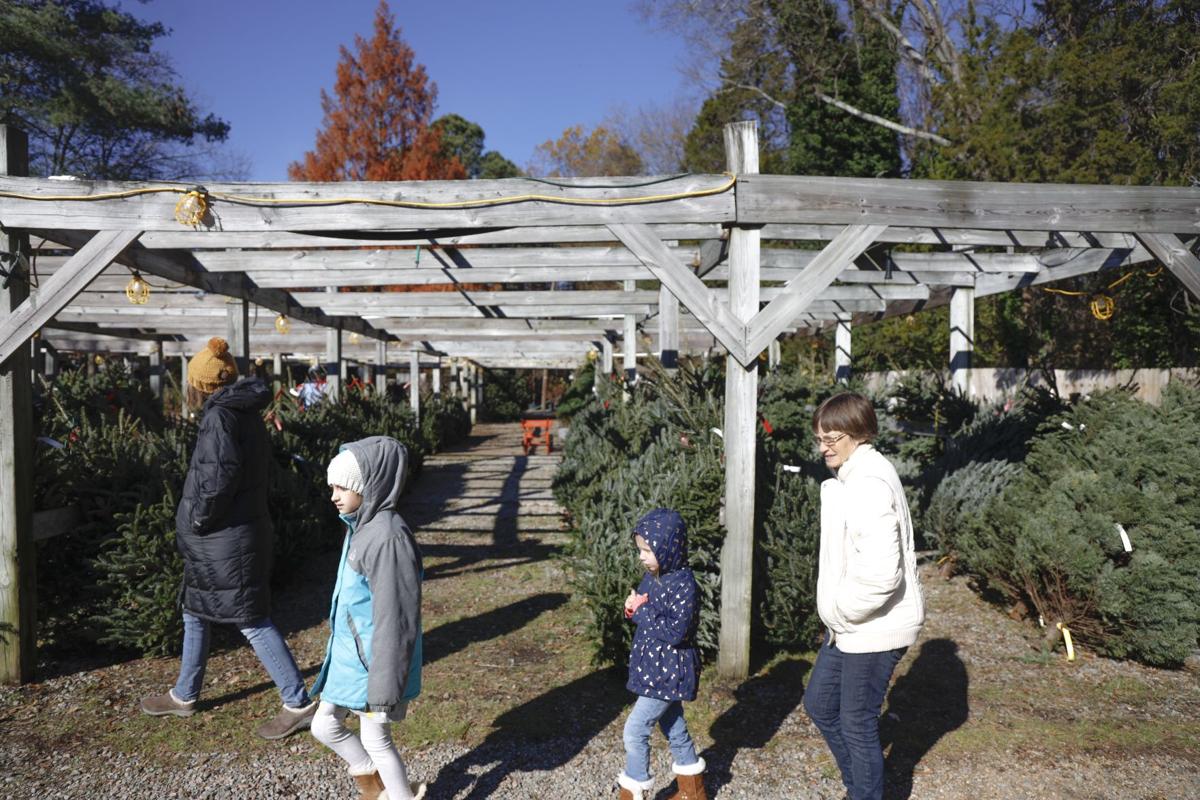 People shopped for Christmas trees on Saturday at Sneed’s Nursery in South Richmond. 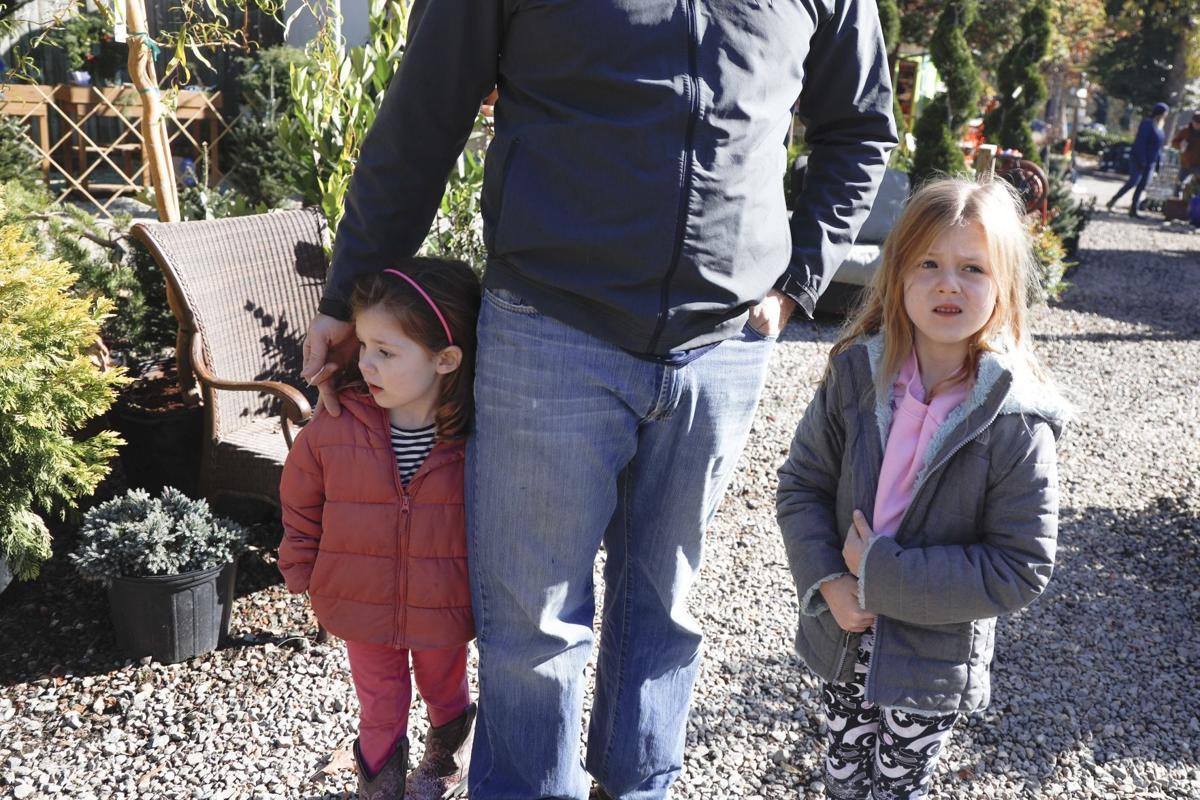 Zach Butler waits along with his daughters, Poppy, 4, left, and Hazel, 6, for their Christmas tree on Saturday, November 27, 2021 at Sneed's Nursery in Richmond, Virginia. 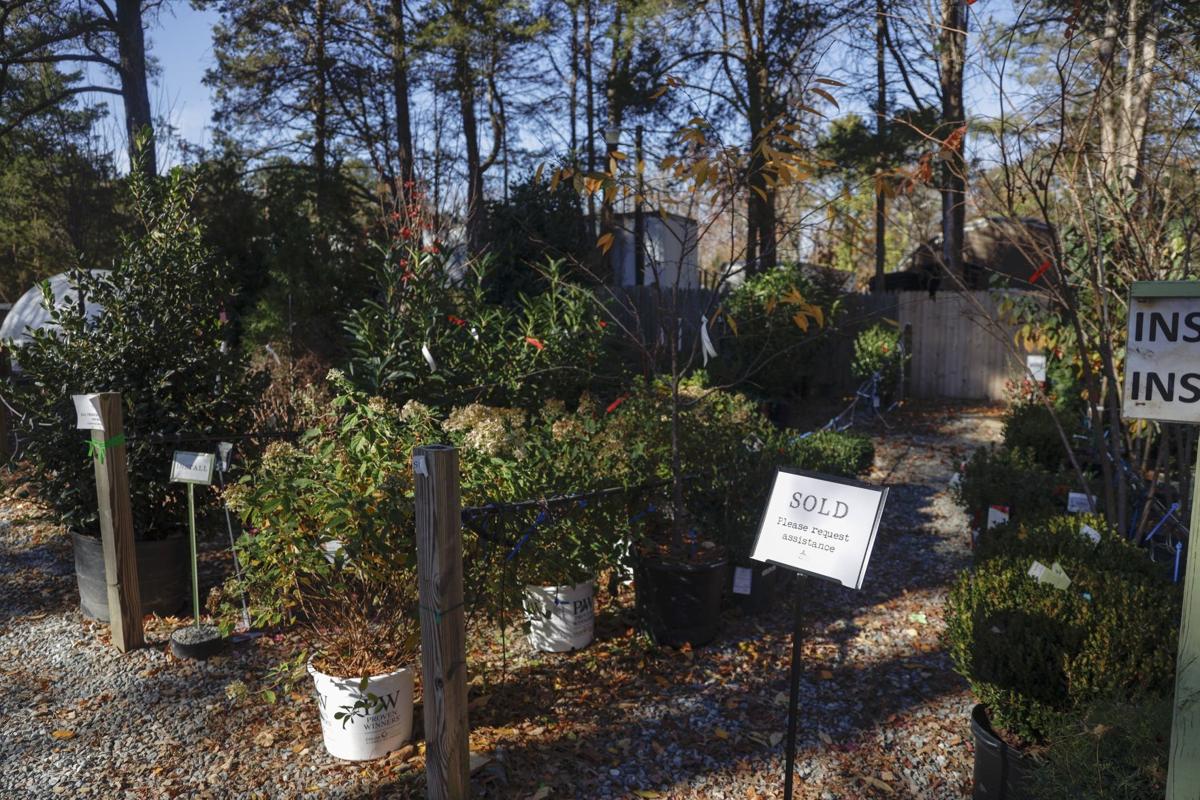 Sold trees and other holiday decorations on Saturday, November 27, 2021 at Sneed's Nursery in Richmond, Virginia.

Over the Thanksgiving weekend, Zach Butler headed to Sneed’s Nursery on Huguenot Road with his two small daughters, Hazel and Poppy, to pick out a Christmas tree.

He was surprised to find that the tree lot — which had just received its main shipments of Christmas trees just days earlier — was more than half empty and already picked over.

“I’m glad we came here today,” he said. While the popular 8- to 9-foot trees were completely sold out, there were still a few 5- to 6-foot and 6- to 7-foot trees left. With the help of his two daughters, Butler picked out a 7-foot Fraser fir for $130 for the family.

It’s a good thing he got one early, because Sneed’s sold all of its trees in the standard 5- to 10-foot range.

Jenny Rash, Sneed’s manager, said, “Last year, I got 1,500 trees [from my supplier]. This year, I only got 600 trees.” Sneed’s buys its premium Christmas trees from Smokey Holler, a tree farm in North Carolina. But due to the shortage, they’re not expecting another shipment.

The reason for the shortage dates back to the economic recession in 2009 when tree farmers planted fewer trees for several years. Because it takes eight to 10 years for a tree to reach maturity, consumers have been experiencing the fallout for the past few years.

“People love the holidays and picking out their Christmas tree. I don’t want anyone to be disappointed,” Rash said.

Consumers should also expect to pay more for live and artificial Christmas trees this year. Buyers should expect to pay between 10% and 30% more for trees this year and have a smaller selection to choose from, according to The Associated Press. Shipments of artificial trees have also been delayed due to supply chain issues including a shortage of truck drivers, according to the AP.

Holly Berry Christmas Trees, a family owned tree lot in northern Chesterfield County, orders its Christmas trees from a supplier in Southwest Virginia. Like Sneed’s, they didn’t receive the volume of trees that they ordered.

Typically Holly Berry opens on Thanksgiving weekend. But this year, with demand so high, they opened a week early. Already, their supply is down to 200 trees.

According to Chenault, the 8-foot trees, which cost $116 at Holly Berry, are most popular with customers.

“We have 6- to 7-foot trees. It’s hard to explain to our customers that this is what they’ll have to settle for this year,” Chenault said. A 6-foot tree at Holly Berry costs $83, while a 7-foot tree costs $93.

Unless their supplier can find more trees, Chenault expects Holly Berry’s season to close early again this year. “It is a true shortage,” he said.

Taking a season off helps replenish supply, which is what Gladden Fields, a cut-your-own tree farm in Albemarle County, did in 2020 and 2018. This year, the farm is open for business and have twice as many as it did three years ago, according to a spokesperson.

Others like Olde Church Christmas Tree Farm in Powhatan County had to take this year off. “Due to extremely high demand for trees last year, our crop needs time to mature. We will be closed for the 2021 season,” the tree farm posted on its website. Calls to the tree farm were not answered.

In the Charlottesville area, most Christmas tree farms expect to be out of trees by the middle of December, if not sooner, according to the Daily Progress.

“Every local tree you can find will be sold this year,” Ryan Clouse, president of the Virginia Christmas Tree Growers Association and a grower with Clouse’s Pine Hill Farm in Frederick County, said in a statement. “Already tight supplies were further impacted by heat and fires in Oregon, which is the largest tree-producing state,” he said.

Many U.S. stores are supplied by growers like Bottomley Evergreens and Farms in Southwest Virginia. Bottomley is Virginia’s largest Christmas tree farm and plants 1 million seedlings annually on 600 acres.

“This year we’ll cut around 600,000 [trees],” Carlos Taylor, Bottomley’s Christmas tree manager, said in a statement. “They’ll go to Texas, parts of New Jersey and New York, Ohio, part of Florida and down to Puerto Rico.”

At Sneed’s, Rash has been encouraging customers to think outside the box and create new traditions. For instance, she says that if you want a tall tree but can only find a 5-foot tree, you can stand it on a crate and have more room for presents. Sneed’s is also renting out artificial trees for the holiday. “We’ll come and pick it up at the end of the season,” Rash said.

In the Richmond area, Christmas trees can be found for purchase at big-box retailers like Home Depot and Lowe’s, as well as for limited times at some Kroger and Food Lion locations. At Lowe’s and Home Depot, 6-foot trees are running around $60. Also at Lowe’s this year, they’ll deliver your tree for free if the order is over $45.

Many consumers like to buy local because they say the quality is better and the needles last longer. Butler, who bought his Christmas tree at Sneed’s, said, “We bought our Christmas tree here last year. It lasted a long time. We always have good luck at Sneed’s.”

Even big-box retailers like Lowe’s are encouraging shoppers to buy early to make sure they get what they want. “While there isn’t an endless supply of holiday products, we are encouraging consumers to shop early to ensure they have the widest selection of options,” a spokesperson for Lowe’s said via email.

Doug Hundley, a spokesperson with the National Christmas Tree Association, said that he wouldn’t describe what’s happening this year as a Christmas tree shortage but rather a tighter supply than in previous years.

“We don’t have an oversupply of real trees like we did 10 years ago. For the last five years, we’ve had a tighter market,” Hundley said. “Everyone who wants to find a real Christmas tree this year will be able to do so. Your choices might not be as full as in years’ past, but the supply is there.”

For the first time ever, Sneed’s will be hosting an Outdoor Holiday Maker’s Market this Saturday with bands, food trucks, local vendors and Santa puppy pictures to try and extend the season.

“The big thing for us is how we can keep operating in December and keep people employed,” Rash said.

Rhonda Harmon’s 59 years were filled to the brim, her existence a reflection of an exuberant pioneering spirit who ignored conventional bounda…

At Sneed’s Nursery in South Richmond, Josh Simon helped Zach Butler, daughter Hazel, 6, and their family friend Megan Dooley choose a Christmas tree on Saturday. The nursery has sold all of the trees it had in the 5- to 10-foot range.

Todd Hannan held Poppy Butler, 4, as they shopped for a Christmas tree on Saturday at Sneed’s Nursery.

People shopped for Christmas trees on Saturday at Sneed’s Nursery in South Richmond.

Zach Butler waits along with his daughters, Poppy, 4, left, and Hazel, 6, for their Christmas tree on Saturday, November 27, 2021 at Sneed's Nursery in Richmond, Virginia.

Sold trees and other holiday decorations on Saturday, November 27, 2021 at Sneed's Nursery in Richmond, Virginia.