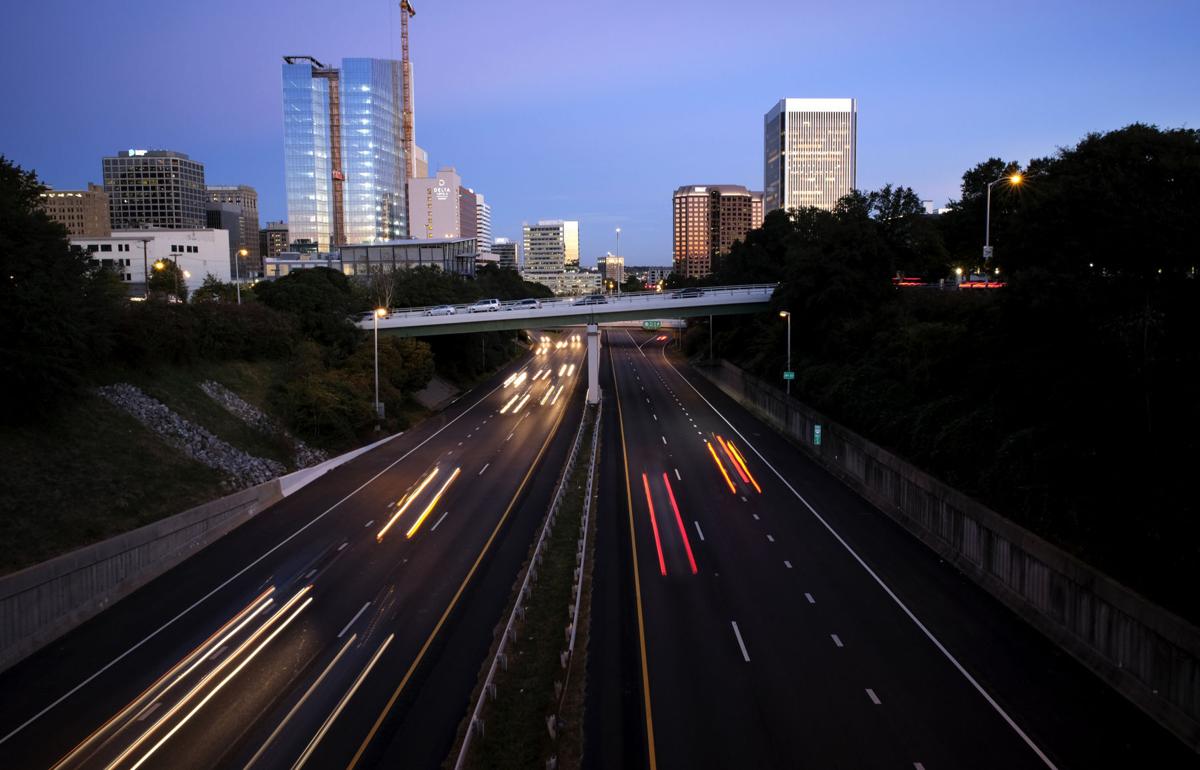 In October 2018, streaks of light from passing cars on the downtown expressway formed a setting for the Richmond skyline after sunset. 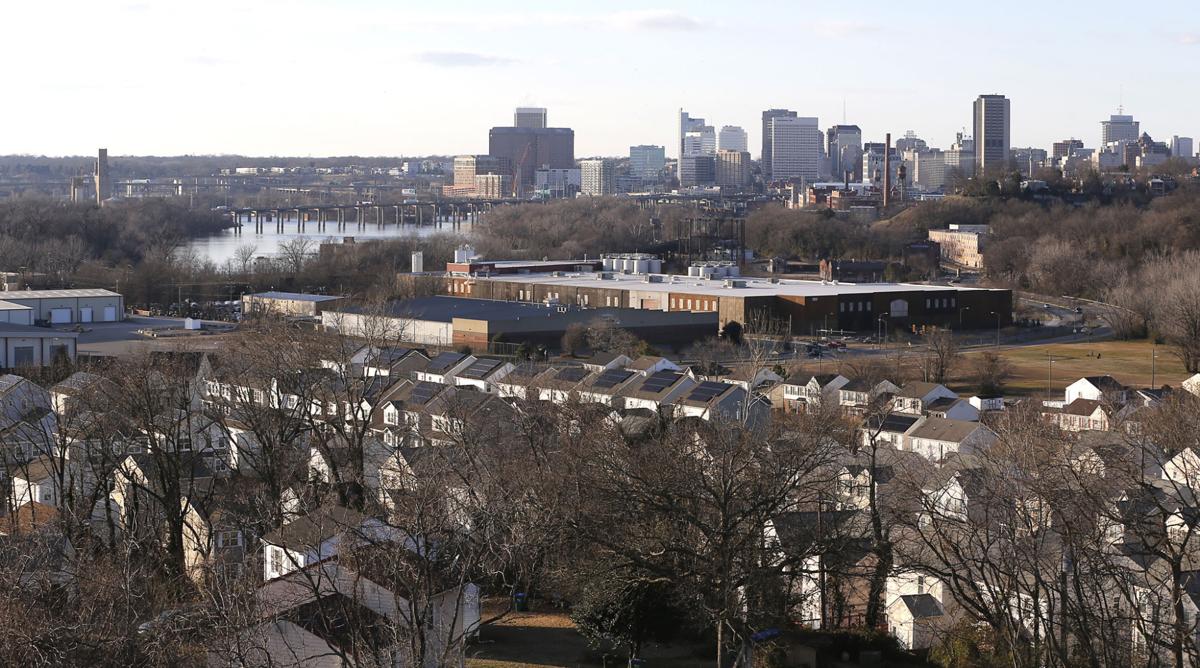 The roof of Fulton’s Artisan Hill offers a view of Richmond’s skyline and the James River. A new master plan aims to guide the city’s future growth.

LaToya Gray sees the legacy of urban renewal on a vacant lot where her great-grandparents used to live on Idlewood Avenue before the construction of the city’s highway system started more than 70 years ago.

She says the Richmond 300 master plan, intended to guide the city’s growth over the next 20 years, is a step toward correcting a history of decisions that changed the trajectory of countless Black lives. She said new ideas described in the proposed plan would encourage development without further displacing communities that suffered under previous urban planning initiatives.

“As someone who has grown up in this city and knows what it’s like to be marginalized ... I know how devastating previous master plans have been on the African American community,” Gray said. “The planners were intentional about reaching out to people who were marginalized and included those voices in the process.”

After more than three years of development, the Richmond City Council will vote Monday on the new master plan for the city over the next two decades, leading up to Richmond’s tricentennial in 2037.

Supporters and critics agree the Richmond 300 plan is imperfect. Should the City Council adopt it anyway?

The 256-page document, based on public input gathered from approximately 7,000 residents, details land-use strategies to meet 17 goals. The goals include protecting historic properties and natural resources, improving public transportation and pedestrian and bicycle infrastructure, promoting tourism, and encouraging development to meet the demand for housing among residents of all income levels.

Imagine the transformation of Scott’s Addition in the last decade. What was previously an industrial area is now one of the city’s most popular destinations with its mix of breweries, restaurants, office space and apartment housing.

City planning officials say that is a prime example of the transformation that can occur elsewhere in the city.

There are also detailed recommendations for central high-growth “nodes” throughout the city, such as Manchester, Jackson Ward, Stony Point and the area surrounding Scott’s Addition.

Those plans include a roundabout on East Belt Boulevard at Southside Plaza; higher density, mixed-use buildings on Arthur Ashe Boulevard with a replacement for The Diamond baseball stadium on the west side of Hermitage Road; and a floating bridge deck park over Interstate 95 connecting Gilpin Court to the rest of Jackson Ward.

Some residents, however, are opposed to the plan for myriad reasons, ranging from impressions that it says too little about the replacement of public housing to fears that proscribed changes may have an adverse impact on the residential character of communities like Oregon Hill.

Trip Pollard, director of the Land and Community Program for the Southern Environmental Law Center, said he is generally supportive of the Richmond 300 plan but doesn’t think the council should approve it unless a few amendments are included.

Pollard said the SELC is concerned about plans for a new I-95 interchange at Bellemeade and a bridge over the James River connecting the city to Henrico County. He said there’s been little engagement in regard to the bridge and that its construction could lead to environmental issues.

Other issues he raised include inconsistency with a small area plan for Shockoe Bottom that’s under consideration, as well as a lack of commitment to provide new housing for residents in public housing sites that are expected to be demolished.

While the plan calls for the development of 10,000 affordable housing units for “low- and very low-income households,” other housing and social justice advocates say additional commitments are needed in the plan.

In a joint letter Friday, the Partnership for Smarter Growth, the Legal Aid Justice Center and social justice collective Richmond For All called on the council to amend the plan.

The requested amendments focus on concerns about public housing redevelopment and implementation of legal requirements and incentives for developers to build affordable housing for the city’s poorest residents.

The ideas described in the plan are not binding, but are cues for where the city’s planning department and developers should look to rezone or build in the coming years.

Pollard said it also could have “legal significance” in land-use deals or when neighbors object to new developments.

“It’s a really good plan on the whole ... but I do think if it’s approved without addressing some of these issues, it bakes in some consequences that run counter to a lot of the goals and objectives,” he said.

Todd Woodson, the outgoing president of the Oregon Hill Neighborhood Association, worries that future land-use maps that show his community designated as a mixed-use area could lead to an unwanted transformation of the predominantly residential neighborhood near the Monroe Park campus of Virginia Commonwealth University.

“We feel our community is really a source of pride for the city,” he said. “What we fear the most is that developers will come in, pay too much, destroy these buildings that have been here ... and put up cheap student housing.”

Councilwoman Stephanie Lynch, who represents the 5th District, recently failed in an effort to amend the plan to leave Oregon Hill as a residential area. Regardless, she said Wednesday that she intends to vote for the plan.

Noting that the council can choose to amend parts of it later, she said the city’s attorney recently advised council members they must either adopt or reject the plan Monday without introducing any further changes to it.

But it’s unclear whether there will be a unanimous decision on the plan.

The City Council’s land-use and housing committee last month advanced the plan without recommending whether it should be approved or denied.

Councilwoman Ellen Robertson told the Richmond Free Press earlier this month that she planned to vote against, citing her concerns about the redevelopment of public housing and other housing issues.

In an interview with the Richmond Times-Dispatch on Thursday, however, she said she had changed her mind after discussing it further with the mayor’s administration. She said the city attorney informed the council recently that it must make a final decision on the plan this week, but that amendments can be made later if it is approved.

“We want to make sure we give those neighborhoods the dedicated attention we need to give them,” she said. “I won’t hold up the master plan going forward, but I do expect amendments will be made.”

Councilman Andreas Addison of the 1st District said he intends to vote for the plan Monday. He said he’s also considering potential amendments, and he predicted that the council could begin discussing them in February or March.

Because of the uncertainty, however, urbanists and others involved in the process are actively advocating for the council to approve the plan.

Sheri Shannon, a communications consultant and environmentalist who served on one of the plan’s advisory committees, said rejecting it would be a blow to those who volunteered to help create it.

While she acknowledged that some parts of the plan are imperfect, she said there are many positives, such as a goal to expand the city’s tree canopy coverage from 42% to 60% with a focus on South Side neighborhoods that are warmer and tend to suffer heat-related health complications during the summer.

“It’s not just about economic development. We’re looking at housing, environment, transportation,” she said. “Folks were invited to the table and able to share their ideas in a way that, to me, hasn’t happened here in a long time.”

LaToya Gray, who said her involvement in the process inspired her to enroll at VCU and pursue a master’s degree in urban planning, feels the same way.

“This plan is not going to solve every problem tomorrow, but it’s a step in the right direction,” she said.

In October 2018, streaks of light from passing cars on the downtown expressway formed a setting for the Richmond skyline after sunset.

The roof of Fulton’s Artisan Hill offers a view of Richmond’s skyline and the James River. A new master plan aims to guide the city’s future growth.