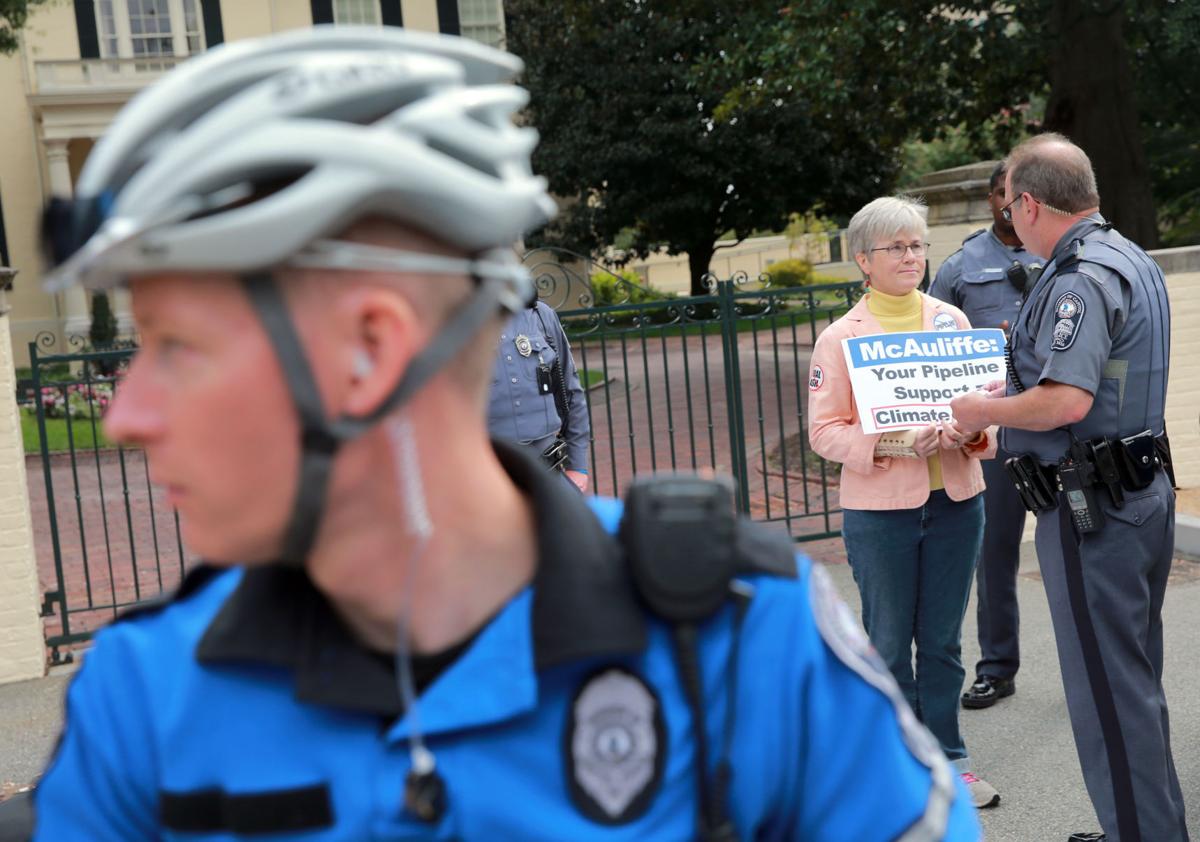 A protester is arrested by Virginia Capitol Police during a rally against pipelines, coal ash and climate change in front of the Executive Mansion. 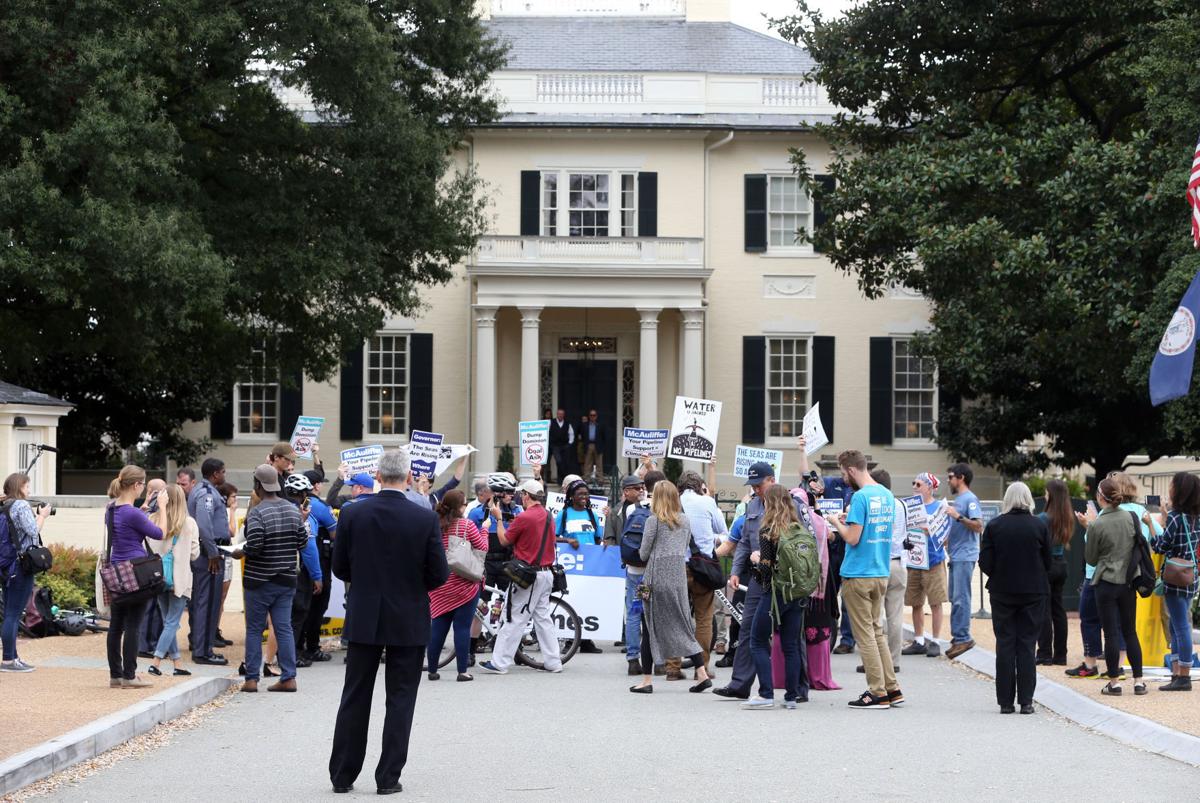 Protesters picket Wednesday against pipelines, coal ash and climate change in front of the Executive Mansion. Twenty-three people were charged with trespassing after the peaceful three-day demonstration.

Twenty-three people were arrested Wednesday for trespassing in front of the Executive Mansion following a peaceful, three-day protest urging Gov. Terry McAuliffe to reject a pair of proposed fracked-gas pipelines, require power companies to clean up or move coal ash ponds before closing them and pass measures to prevent rising sea levels.

“We’re fed up,” said Russell Chisholm, of Newport in Giles County. “We’re not professional activists. We’re real people who are being impacted by and care deeply about these issues. Enough that we’re willing to risk arrest to make our point.”

The protesters, organized by Chesapeake Climate Action Network, a Maryland-based nonprofit fighting global warming, totaled about 50 people on their third day of activity around the capitol grounds. About half stepped up their efforts by blocking the mansion’s entrance in hopes of sending a stronger message to McAuliffe. The group said the governor has failed to meet with them time and time again and their opposition has fallen on deaf ears.

“I am here today to remind Gov. McAuliffe that when called to serve, I did not shrug my shoulders and claim, ‘Not my job,’“ Chisholm, an Army veteran who served in Desert Storm, told the crowd. He was referencing McAuliffe’s response in a recent interview where the governor stated he could not stop the pipeline project, even if he wanted to, which is in the midst of a lengthy environmental review process by the Federal Energy Regulatory Commission.

The governor’s office did not respond to requests for comment.

Chisholm lives within walking distance of the Appalachian Trail and just a few miles from the proposed Mountain Valley Pipeline that would extend almost 300 miles from Wetzel County, W.Va., to an existing pipeline hub in Pittsylvania County. He smiled and held a clenched fist in the air as officers from the Virginia Capitol Police escorted him to a tent set up in area cordoned off crime scene tape.

Lee Williams, of Richmond, said she wanted to be arrested because she felt her voice wasn’t being heard through the other means.

“I have testified at water board meetings, talked about cancer clusters and the ill effects of fracking. I’ve called my senators, delegates, local lawmakers. I written letters,” Williams said. “I’ve gotten blank stares. I feel like my voice is not being heard. I’ve tried democracy.”

Instead, the group resorted to an act of civil disobedience. At about 12:30 p.m. Wednesday, the group, ranging from college students to an 83-year-old woman, lined up in front off a gate that leads to the governor’s mansion and chanted. They even notified Capitol Police ahead of time saying some of them wanted to be arrested to make their point.

Officers asked each protester individually to disperse and warned that they would be arrested if they did not comply. When they did not leave, the protesters were issued summons for trespassing and escorted off the premises. They will have to appear in Richmond General District Court in November for a hearing.

Nearly all of those arrested smiled and joked with the officers who never raised a hand or weapon.

“These are regular people and they have a cause,” said Capt. Raymond Goodloe, deputy chief of operations for the Division of Capital Police. “Everyone was compliant — well, except when they were asked to move from blocking the driveway.”

Katharine Layton, of Fort Valley, said she hopes their actions will inspire more people to speak out.

“We want people to know they don’t have to take things lying down,” Layton said.

Richmond and Henrico health districts holding large-scale events where up to 12,000 seniors can get vaccinated

The Richmond and Henrico health districts, in conjunction with Henrico County, will hold three large-scale vaccination events in the coming da…

Bedrock Bee can only watch as the garden he helped plant at the epicenter of Richmond’s racial justice movement last year fades.

“I’ve never met someone like Adam, and I don’t think I ever will again,” said his friend, Max Turner.

A protester is arrested by Virginia Capitol Police during a rally against pipelines, coal ash and climate change in front of the Executive Mansion.

Protesters picket Wednesday against pipelines, coal ash and climate change in front of the Executive Mansion. Twenty-three people were charged with trespassing after the peaceful three-day demonstration.