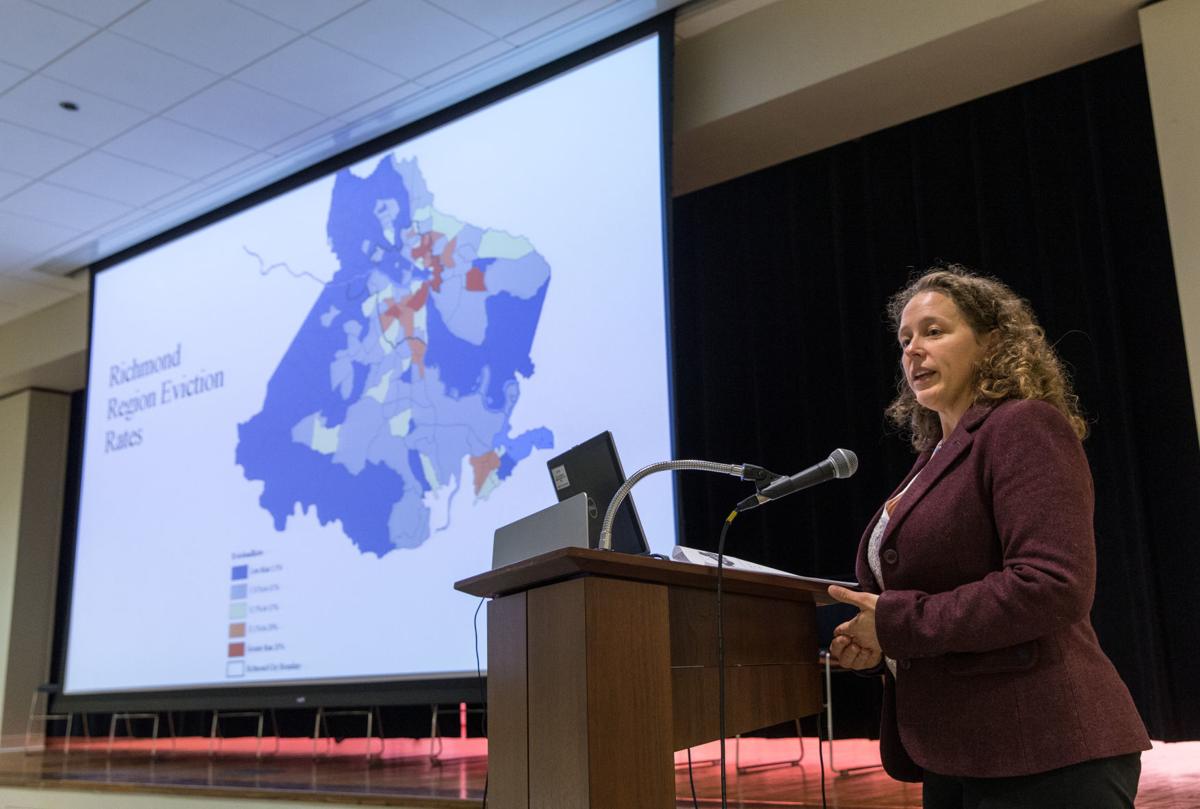 On Nov. 29, Kathryn Howell from RVA Eviction Lab presented data on eviction rates in the Richmond region during a Campaign to Reduce Evictions panel event at the Main Branch of the Richmond Public Library. 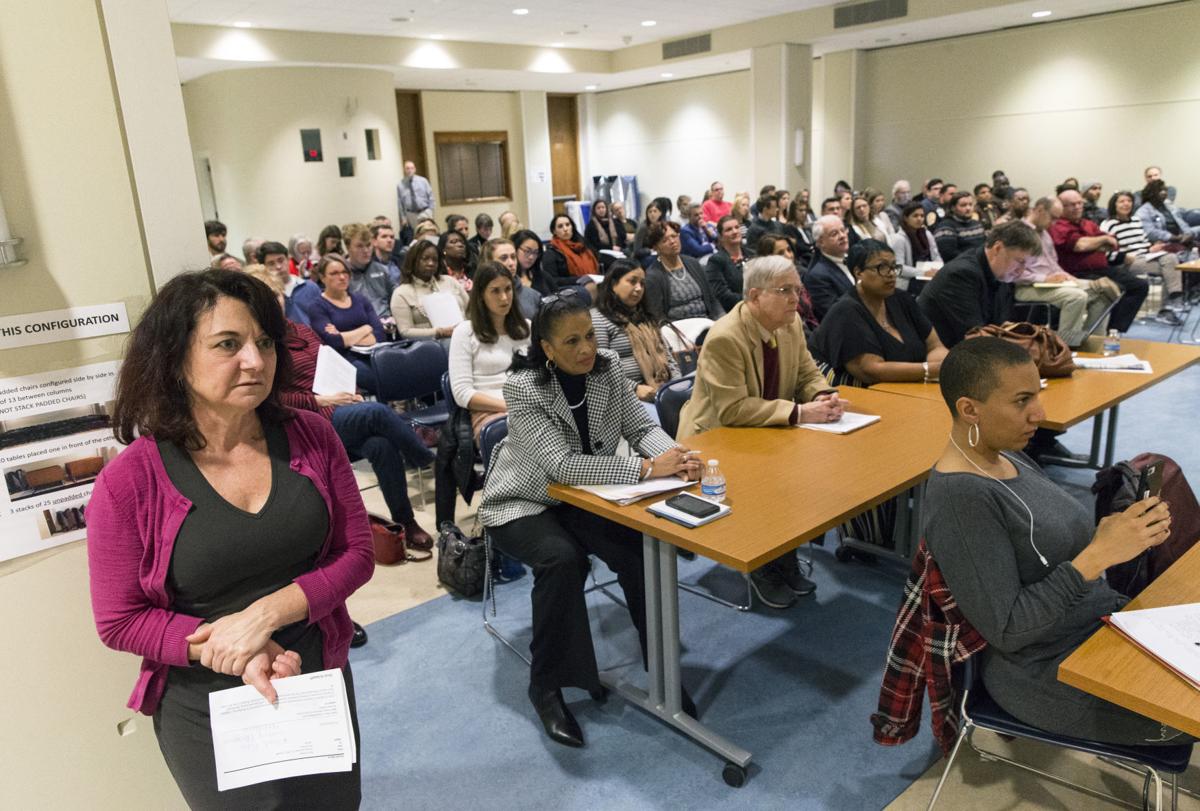 Christie Marra (left) an attorney for the Virginia Poverty Law Center, listened as Omari Al-Qadaffi, a community organizer, spoke during a forum to discuss the link between racism and eviction. 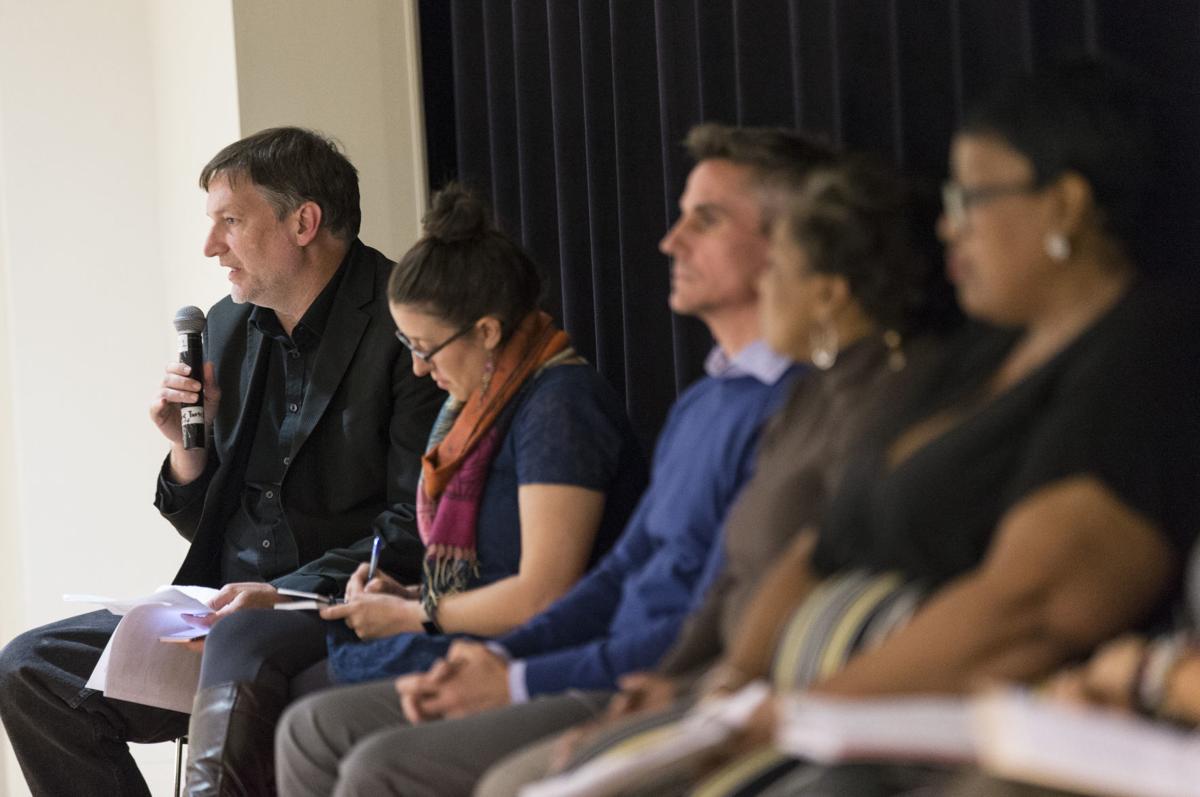 Dr. Thad Williamson, left, a professor of University of Richmond, answers a question with other panels during Campaign to Reduce Evictions panel event at Main Library in Richmond on Thursday, Nov. 29, 2018. 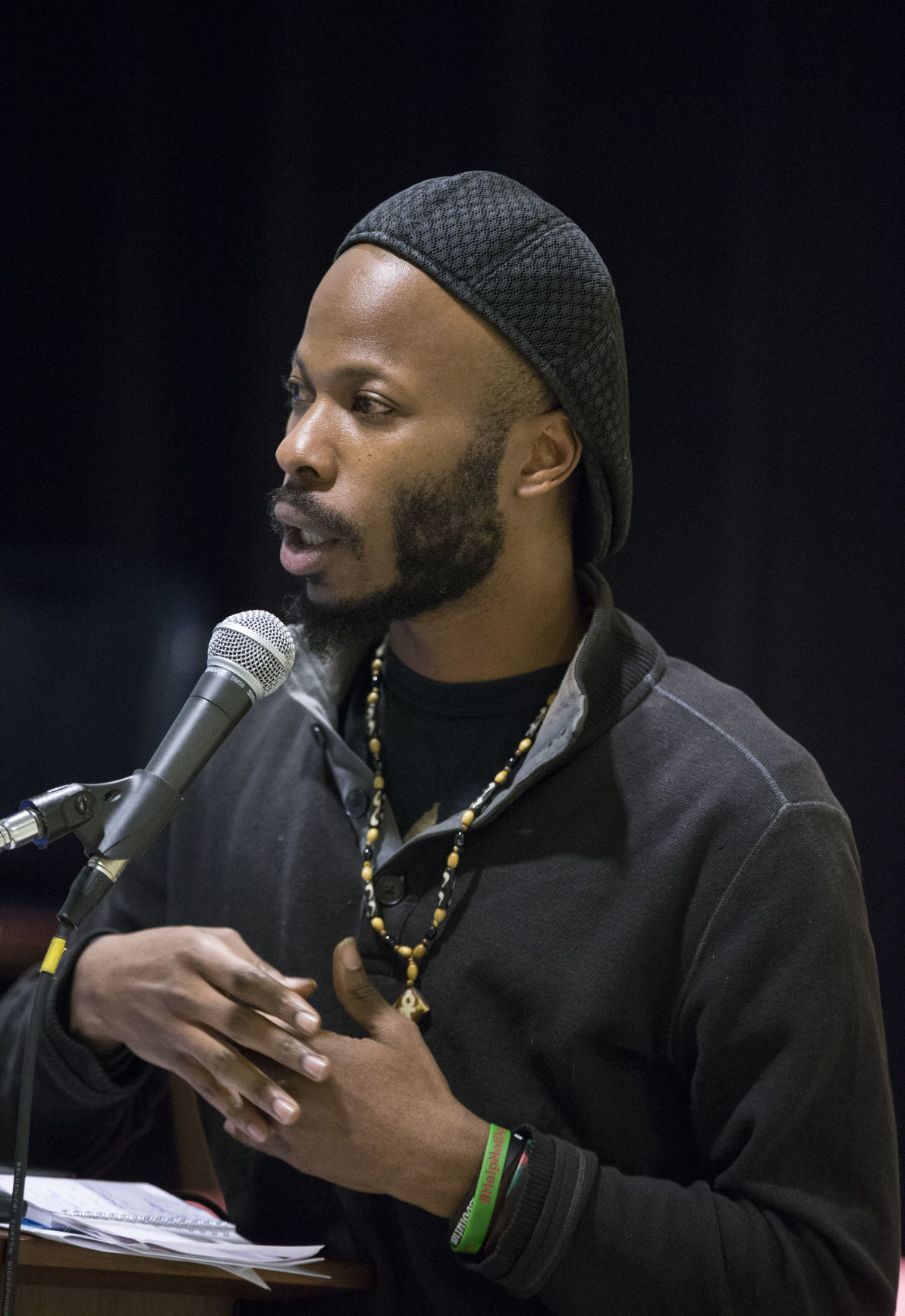 Omari Al-Qadaffi stood before an auditorium full of people gathered for a panel event to discuss racism and eviction in Virginia and explained that his role speaking at the event was a last-minute change.

Al-Qadaffi, a community organizer who works with low-income communities on housing, transportation and food access, said he had originally been asked to bring a person who had personally experienced eviction, but he didn’t think that it was right to ask hardworking people with difficulty finding transportation to come to Thursday’s event without compensation.

“I don’t really think it’s fair to ask people who are rent-burdened already,” Al-Qadaffi said. “Most of the people in this room are being paid.”

Instead, he and some members of the eight-person panel later asserted, the policymakers should be going into the communities most affected by race-based inequity to get their input for solutions.

“We really won’t be able to solve the problem — or even be able to push the needle on it — if we’re not going to the community to have them inform the policy that we’re making,” Al-Qadaffi said.

It was a theme that arose time and again during the two-hour panel discussion: the failures that have occurred throughout Richmond’s past and into its present to include African-Americans — particularly low-income families — in decisions that affect their lives.

“Richmond doesn’t want to acknowledge that race has everything to do with everything,” said Tracey Hardney-Scott, chair of the NAACP Richmond Branch’s housing committee and one of the panelists. “We keep creating commissions. … Until we’re able to come to the table and have real conversations, it’s just a Band-Aid.”

The event, “Race, Racism, and Evictions in the Old Dominion,” and hosted by the Campaign to Reduce Evictions at the Richmond Public Library downtown, included a presentation by Kate Howell of VCU’s Eviction Lab on current eviction data and a panel discussion including local scholars and community activists. The panel members touched on the relationships between race discrimination, access to housing and other societal factors, such as poverty, education and mental health.

Howell displayed maps of Richmond, illustrating the rates of evictions in various neighborhoods. While the city has an average eviction rate of 11 percent, she said, parts of Richmond have rates up to three times that average.

The most influential factor in eviction rates is race — twice as influential as the poverty rate in the neighborhood, she said.

“When you talk about Richmond, it’s all about race,” said John Moeser, a retired professor from Virginia Commonwealth University and the University of Richmond, who gave a brief overview of the history of systemic racism in the region:

He explained that Richmond had pushed racial segregation in 1911 using an ordinance and again in 1924 with a race-based zoning code before the U.S. Supreme Court declared both unconstitutional.

But in the 1930s and after, segregation was enforced by bankers, lenders and real estate agents who would put race-based stipulations on deeds or use scare tactics to persuade white homeowners to sell their homes when black neighbors moved in, only to inflate the price before selling it to another black family, Moeser said. This segregation was perpetuated by the federal government’s loan program, creating a rating system that put African-American neighborhoods at the bottom.

Even though Richmond has such a stained past, Moeser said that, when comparing maps from the 19th and 21st centuries, the city is more segregated than it has ever been.

One of the panelists, Chelsea Higgs Wise, a social worker and advocate for minorities, encouraged the people in attendance to be wary of the narrative that they follow and spread to be sure it isn’t perpetuating white supremacy.

“How can we change the narrative?” Kelly Evans, a housing advocate, asked during the question-and-answer session. “Not being forceful or beating people over the head. Can we do this in a place of love?”

“We need to deal with some truth,” added attendee Lillie A. Estes. “There’s a place for informational forums like this, but we need to figure out how to get this work done. ... I’m a firm believer in human problems can be solved by humans.”

The Campaign to Reduce Evictions plans to hold a tenant town hall in December to hear from the people affected by evictions, said Christie Marra, an attorney for the Virginia Poverty Law Center and one of the event organizers. The campaign was formed by legal aid and affordable housing advocates, apartment industry representatives and dozens of other groups.

On Nov. 29, Kathryn Howell from RVA Eviction Lab presented data on eviction rates in the Richmond region during a Campaign to Reduce Evictions panel event at the Main Branch of the Richmond Public Library.

Christie Marra (left) an attorney for the Virginia Poverty Law Center, listened as Omari Al-Qadaffi, a community organizer, spoke during a forum to discuss the link between racism and eviction.

Dr. Thad Williamson, left, a professor of University of Richmond, answers a question with other panels during Campaign to Reduce Evictions panel event at Main Library in Richmond on Thursday, Nov. 29, 2018.