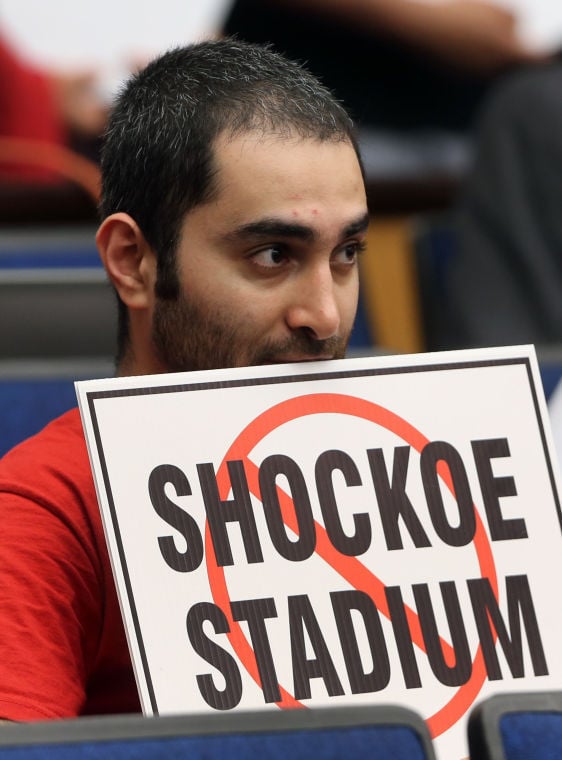 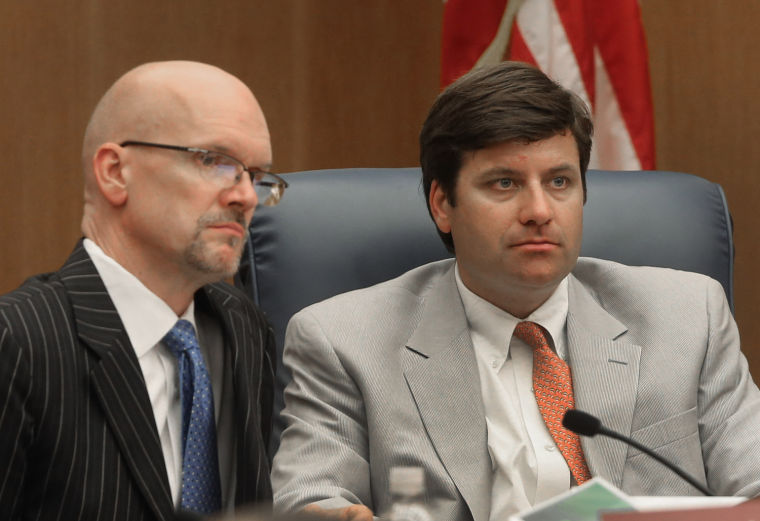 City Council members Chris Hilbert (left) and Parker Agelasto, during a City Council meeting, May 27, 2014. City Council was to have voted on the proposal, but Mayor Dwight Jones withdrew his plan for a Shockoe Bottom baseball stadium a few hours before it was to be voted on. The majority of Council members have voiced their opposition to the mayor's plan. Hilbert and Agelasto are against the plan of Mayor Jones. 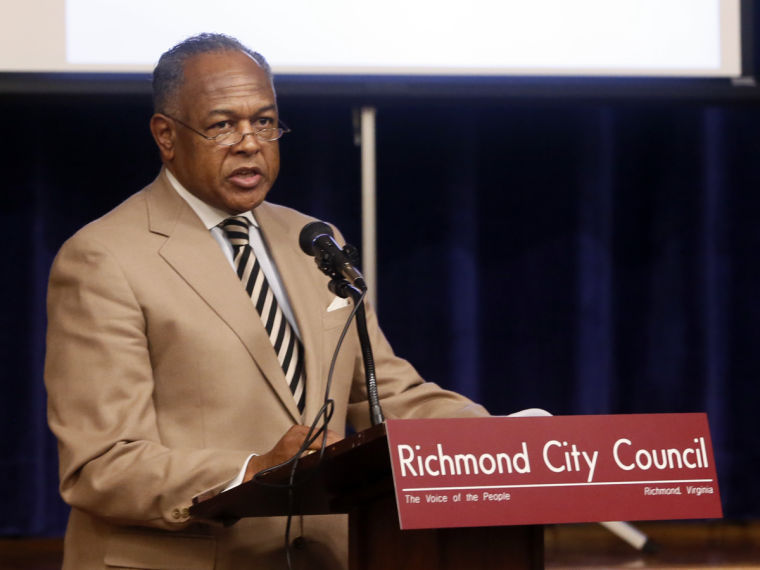 RICHMOND -- Richmond Mayor Dwight C. Jones withdrew his proposal for a Shockoe Bottom baseball stadium from consideration Tuesday night in a last-minute gambit for more time just before the start of a City Council meeting where the plan faced near-certain defeat.

By withdrawing his own ordinance from the agenda, Jones prevented a vote that would have effectively killed the plan. The move pushes the stadium proposal deeper into limbo, with no clear timetable for when it will be brought back.

There also seem to be differing opinions about just how much life the plan has left.

In an interview just before the council meeting, Jones insisted his plan was “not dead” and reiterated his hope that the council will take more time to hear the details.

“The issue of taking the paper off the docket is to make sure that we get an informed vote and we do not disrespect the hundreds of people who came out to all of the public information sessions that we were required to do,” Jones said. “And all of the people who have poured a lot of blood, sweat and tears into the planning of this proposal.”

Late last week, Jones invited the council to a “comprehensive briefing” on the plan Thursday.

“If that works, great,” Jones said. “If it doesn’t work, we’ll keep on working until we can get everybody together and give them all the information.”

Jones said he hopes to have the final details ready “as soon as possible.”

The mayor will likely face an uphill battle, with five of nine council members having publicly stated their opposition and the process already behind schedule.

The late withdrawal of the paper, which came as the chamber was filling up with red-clad opponents to the stadium plan, did not sit well with some council members.

“He should have been man enough to come in here and say, ‘Hey, I decided to pull the paper,’” Trammell said. “Those people that were out here tonight — we didn’t even give them a chance.”

Jones first presented the plan in November, pitching as an opportunity to build a new home for the Richmond Flying Squirrels, commemorate Shockoe’s slave history and generate jobs and revenue by spurring the private development of a grocery story, hotel and apartments in the Bottom and freeing up for redevelopment North Boulevard, where the Squirrels now play at The Diamond.

The administration had initially said it was hoping for the council to make a decision in the first quarter of the year. A March 27 deadline to finalize the plan was also missed.

For two weeks, the ordinance had been scheduled to be heard May 27. That date was set when the administration introduced the latest iteration of the plan May 12.

Proposed ordinances and resolutions are typically introduced at the end of each council meeting. The next council meeting is scheduled for June 9, presumably the earliest date for a reintroduction of the Shockoe plan. As summer arrives, the council will have one regular monthly meeting rather than two, a schedule being tried for the first time this year.

Though the stadium issue was taken off Tuesday’s agenda, the council voted unanimously to adopt a city budget that included $10.6 million in infrastructure funding for the Shockoe plan.

Before the vote, several stadium opponents urged the council to reallocate the money because it was tied to a plan that was no longer under formal consideration.

“The mayor has been abusing the citizenry and bullying you guys from day one,” Spencer Turner said.

“He’s kind of messing with us at this point,” Claire Tuite said. “He knows that his plan is spiraling out of control.”

Several council members pointed out that they were legally bound to adopt the budget by May 31, which prevented them from making amendments Tuesday. If the council fails to adopt a budget by that deadline, the mayor’s proposed budget goes into effect.

Council President Charles R. Samuels, 2nd District, said the mayor had agreed to work with the council to reallocate the $10.6 million if the Shockoe project did not move forward.

“I’m ready to work with the administration on another idea,” Hilbert said. “And I hope we can move on from this one.”

The council was also forced to take a five-minute recess after Councilwoman Michelle R. Mosby, 9th District, chastised public speakers for what she characterized as constant negativity on the stadium and other issues.

“Everything is always a negative,” Mosby said. “It’s never that this body is doing anything to work for this city.”

A group of about seven or eight people in the audience began shouting objections to Mosby’s remarks, forcing Samuels to call a recess.

After the meeting, some of the four council members who favor the mayor’s plan seemed surprised to hear that he had said it was still alive and that he intended to present more information in the near future.

“As soon as I go out and get that information from the mayor’s office, I’ll be able to be responsive,” said Councilwoman Cynthia I. Newbille, 7th District, when told about the mayor’s remarks.

“If we know that, why pull anybody into spending resources, whether it’s the city taxpayer resources or the potential developers’ resources, on something that ultimately is going to fail?” Agelasto said.

Councilman Jonathan T. Baliles, 1st District, said his main concern is that the council approved an amendment asking that the city not have a “moral obligation” to pay off the bonds for the $79.6 million project, which would technically be issued by the Richmond Economic Development Authority. But that obligation still exists, Baliles said.

“If that changes on Thursday, or in the coming months, then I certainly would consider it,” Baliles said. “But a moral obligation should be a worry to everybody, given the city’s recent history.”

Samuels said he didn’t want to “dictate” when the mayor should make any additional proposals, but he said he’ll keep an open mind about plans from the administration or “other parties.”

“Before I start guessing about what I might do, I think the administration, specifically the mayor and myself, need to sit down and talk about what we’d like to see in a proposal,” Samuels said.

The mayor said his plan remains the “only plan” that revitalizes two underutilized areas of the city while commemorating slave history and generating up to $200 million in new net revenue over 20 years.

“It’s the only plan that really is a bold plan to move the city forward,” Jones said.

City Council members Chris Hilbert (left) and Parker Agelasto, during a City Council meeting, May 27, 2014. City Council was to have voted on the proposal, but Mayor Dwight Jones withdrew his plan for a Shockoe Bottom baseball stadium a few hours before it was to be voted on. The majority of Council members have voiced their opposition to the mayor's plan. Hilbert and Agelasto are against the plan of Mayor Jones.