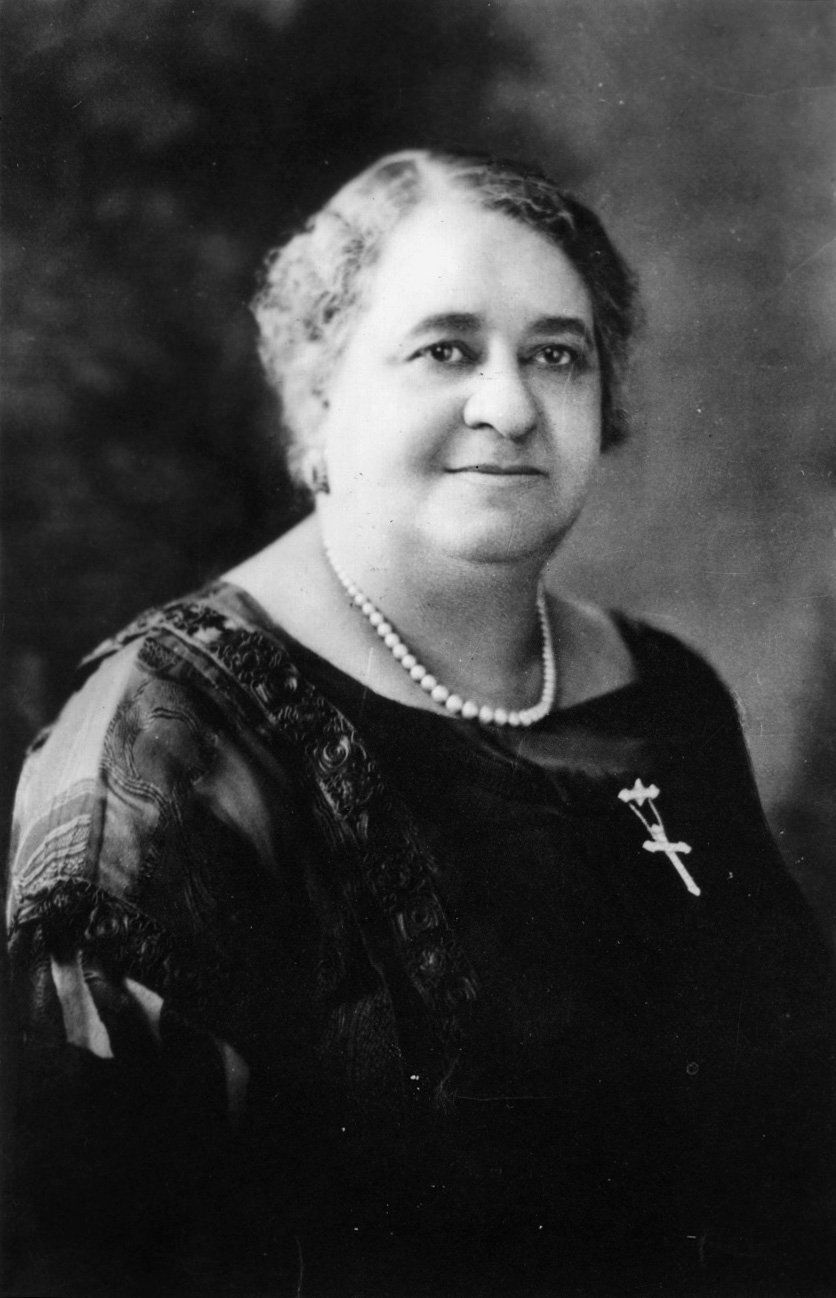 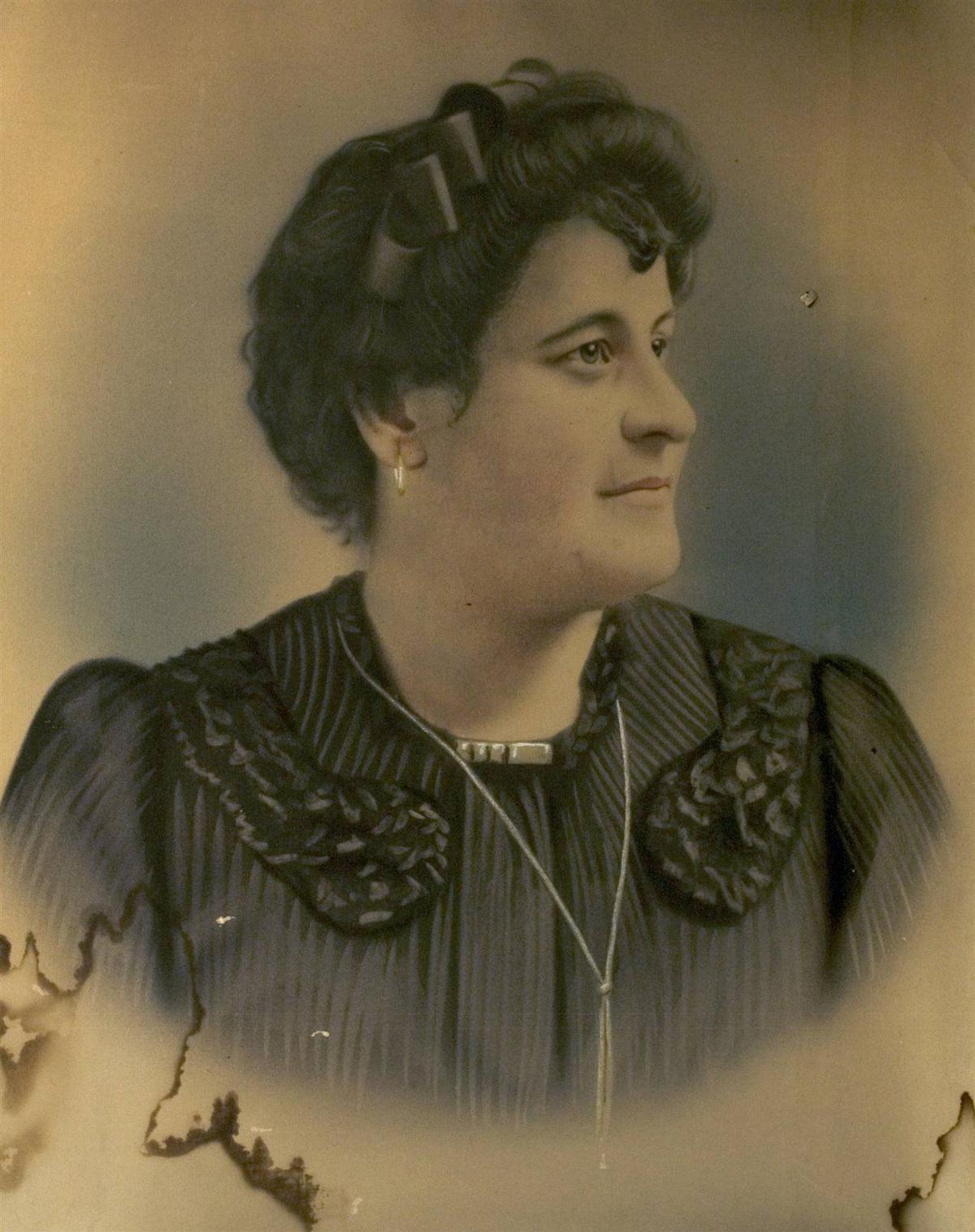 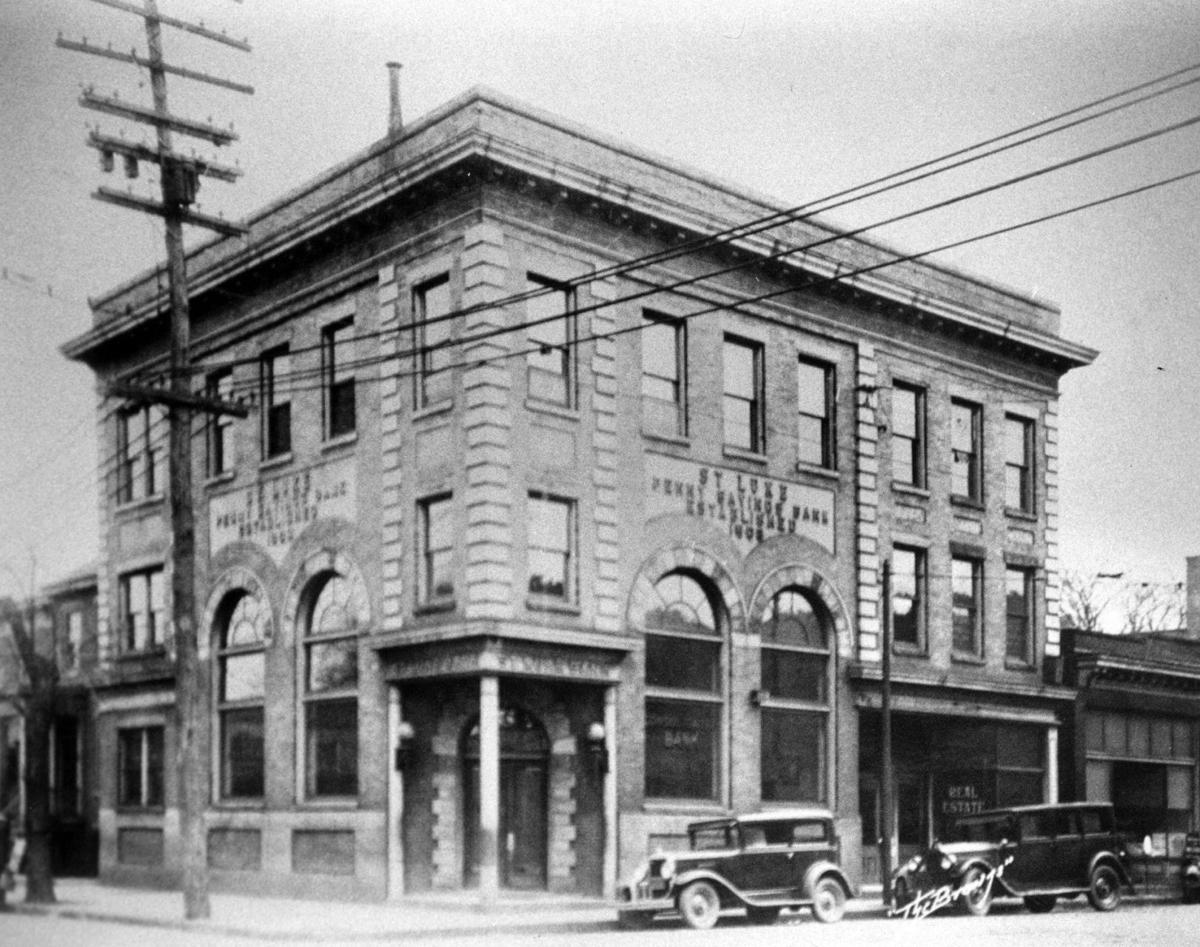 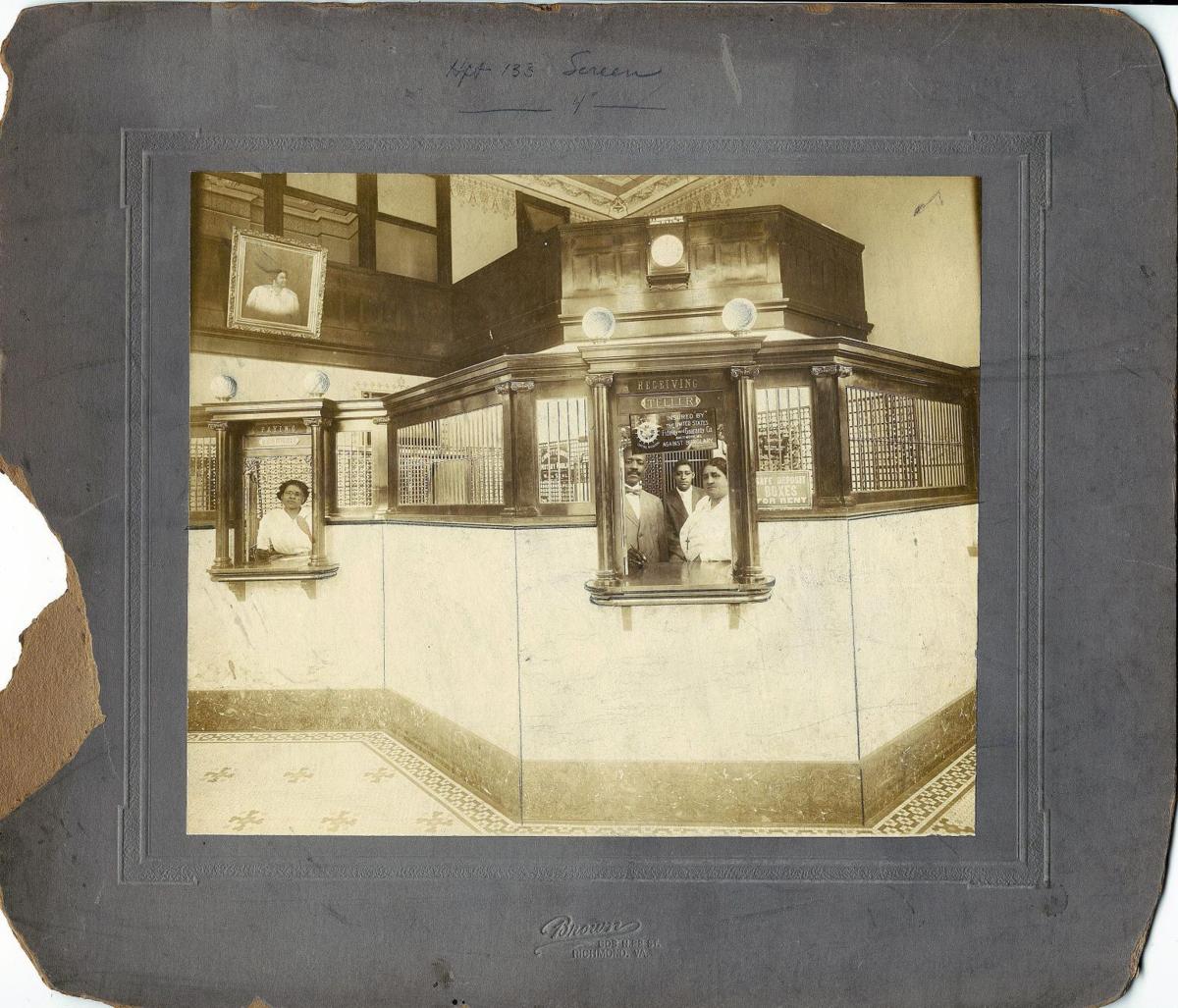 Maggie L. Walker and her staff stand inside St. Luke Penny Savings Bank in Richmond. Although she is best known for her impact on banking, Walker was a leader in many sectors of Richmond. 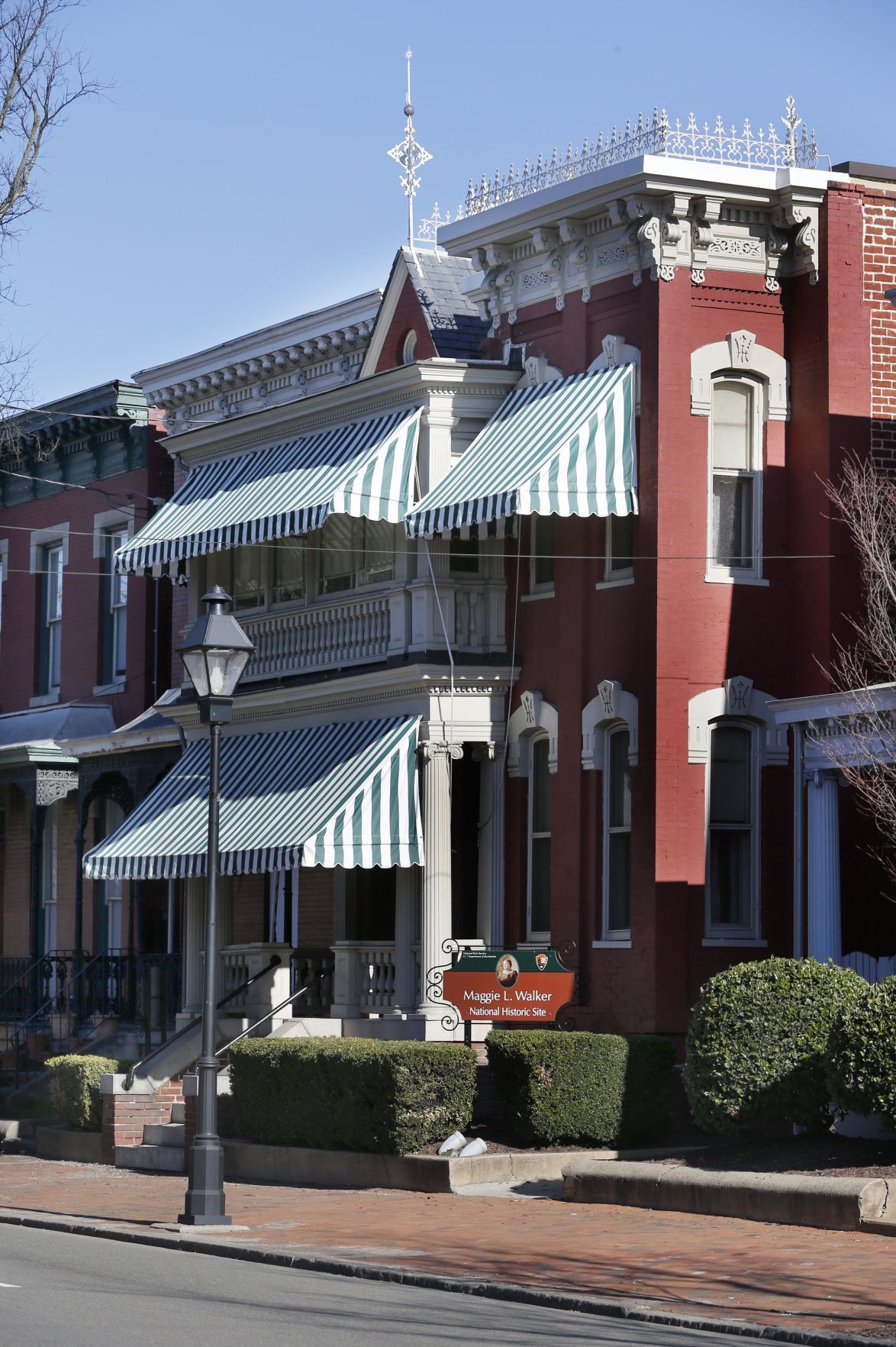 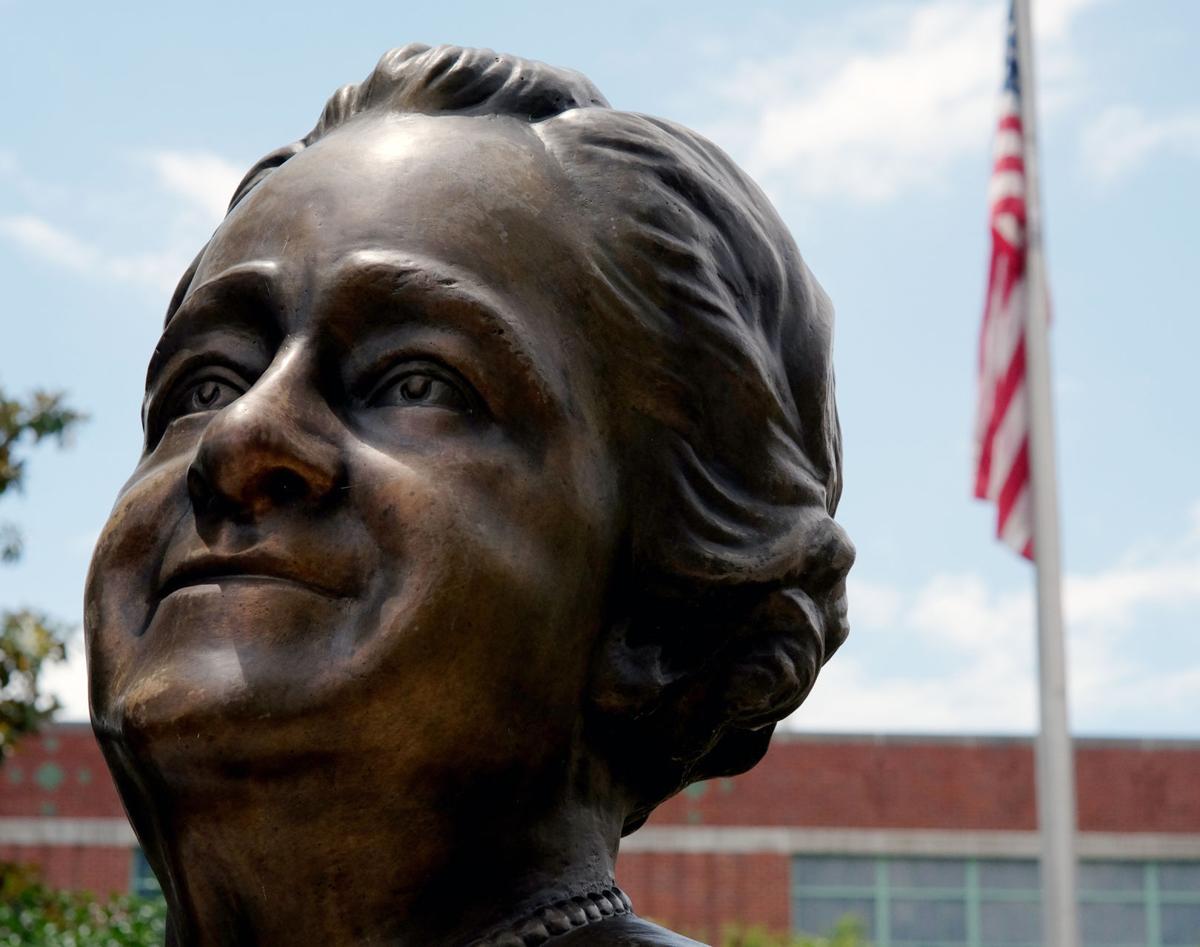 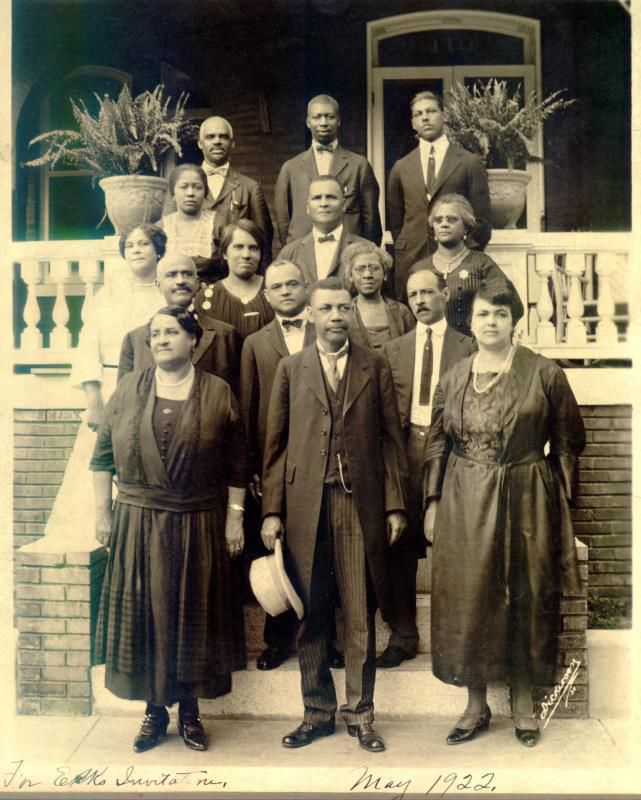 Photo on the steps of Maggie Walker's home. Walker is in the front row, on the left.

She led a boycott against the city’s segregated street cars that ended in the transit company’s bankruptcy.

She opened a department store that offered residents an alternative to white-owned businesses that refused to let black patrons try on clothes.

And she helped found the Richmond chapter of the NAACP and started the first black Girl Scout Troop in the South.

Richmond-native Maggie L. Walker may be best known as the first black woman to charter a bank in the United States. But Walker’s admirers hope a statue of her unveiled Saturday will help put that legacy in the context of her role as a prominent and early advocate for black Richmonders fighting against Jim Crow-era segregation and racism.

“People are beginning to see her beyond that sound bite of her being a black female banker,” said Ajena Rogers, the supervisory park ranger at the Maggie L. Walker National Historic Site at her home in Jackson Ward. “Her star is rising once again. She’s not only known in the black community in Richmond. Not only known in Richmond itself.”

Rogers was on the committee that helped plan the statue, which she said was designed specifically to advance Walker’s story beyond that one element of her life that’s already widely known.

“She was an entrepreneur,” Rogers said. “She was a teacher. She was a civil rights activist. She spoke up for women’s rights, African-American rights. She was on the same level as Booker T. Washington and W.E.B. Du Bois.”

Those — not her status as the founder of the St. Luke Penny Savings Bank — are the accomplishments highlighted on an inscription around the statue at a new plaza at Broad and Adams streets, which reads “Teacher, businesswoman, newspaper publisher, civil rights leader, entrepreneur and mother.”

Born in Richmond in 1864 to Elizabeth Draper, a former slave and cook, she worked as a schoolteacher until her marriage. At a young age, she joined the African-American fraternal organization the Independent Order of St. Luke, rising through the ranks to lead the organization. It’s a position she would ultimately use to build the conglomerate of businesses aimed at economically empowering black Richmonders.

Walker’s bank opened in 1903 and was a central element to that mission. By extending loans and mortgages to black residents who might otherwise have been shut out of white-owned financial institutions, Walker is credited with helping give an early boost to the city’s burgeoning black middle class.

The bank would later become Consolidated Bank and Trust, which operated in Jackson Ward through 2005 and held the distinction of the longest continuously operating black-owned bank.

“The reason she started a bank and these other enterprises is because with fewer opportunities to act on an equal footing with the white community, you needed those things in the black community,” said Brendan Wolfe, the editor of the Virginia Foundation for the Humanities’ Encyclopedia Virginia. “There was this move to operate within the black community and build these institutions for themselves. And she became a prime mover in that.

“What she was doing was really remarkable but really necessary by the political and social conditions that black Richmonders and Virginians were living in.”

In 1904, Walker took on the city’s white-owned department stores when she opened the St. Luke’s Emporium on Broad Street. In public addresses, she implored her fellow black Richmonders to patronize black-owned businesses to avoid the indignity they experienced at major stores like Thalhimers, which required black patrons to enter through different entrances, refused to allow them to try on clothes and would not let them dine at their lunch counters.

Walker promised customers fair prices, displayed clothing on brown-skinned mannequins and, yes, allowed all patrons to try on clothing before they bought it. Her shop exclusively hired black women — a group that she knew found itself doubly oppressed — to work as clerks.

“Women of your race, your own flesh and blood, as polite and as capable as any other women on Broad Street, but they are Negro women,” Walker said. “Some of you pass them by, preferring to feed the lion of prejudice rather than your own brethren. If we have the same shirts, cuffs and collars, underwear as the white stores, and we are not one cent higher, and in many instances cheaper, why spend your money with men who would not give your child employment except as a porter?”

The same year, Walker used her newspaper, which she launched in 1902, to join other black leaders in the city to protest the segregation of the city’s streetcar system.

Richmond’s transit system, operated at the time by the Virginia Power and Passenger Co., was instituting a new policy that had been recently allowed under state law that gave conductors police powers and the authority to rearrange passengers at will.

“The conductors have the right to require passengers to change their seats as often as may be necessary for the comfort and convenience of the passengers and satisfactory separation of the races,” a Richmond Times-Dispatch story at the time said.

Walker and John Mitchell Jr., the editor of the Richmond Planet, urged black Richmonders to abandon the system rather than submit to the new rules. In an address, she said black Richmonders could preserve their dignity by walking. And walk many did.

Two months later, the trolley company went bankrupt, unable to pay its debts, which Walker and Mitchell attributed to the sudden drop in customers and striking employees earlier in the year.

Walker traveled extensively to speak about her work and advocate for economic independence within the black community. She was referred to in press coverage as “probably the most famous” black woman in the state.

She died in 1934 of complications from diabetes. Her funeral is remembered as one of the largest and most attended in the city after the Civil War.

She has long been celebrated in Richmond, particularly in the black community. The city opened Maggie L. Walker High School four years after her death. Her family retained ownership of her home and preserved its contents, anticipating its value to future generations. Then-Mayor Henry Marsh testified before Congress in 1978 in support of designating the house a national park, a goal that was realized not long after with the opening of the Maggie L. Walker National Historic Site.

Melvin Jones Jr., one of the most vocal recent advocates for her memorialization, said he first learned of Walker when he was 10 from his great-grandmother, who used the story about Walker’s bank to teach him about the importance of saving money.

Jones, who attended Maggie L. Walker High School, said that like many others, he did not learn about the breadth of Walker’s contributions to the city until he began researching her more as part of his advocacy for the statue.

He said he grew more and more impressed the more he learned.

Bedrock Bee can only watch as the garden he helped plant at the epicenter of Richmond’s racial justice movement last year fades. • An 8-foot-t…

Maggie L. Walker and her staff stand inside St. Luke Penny Savings Bank in Richmond. Although she is best known for her impact on banking, Walker was a leader in many sectors of Richmond.

Photo on the steps of Maggie Walker's home. Walker is in the front row, on the left.