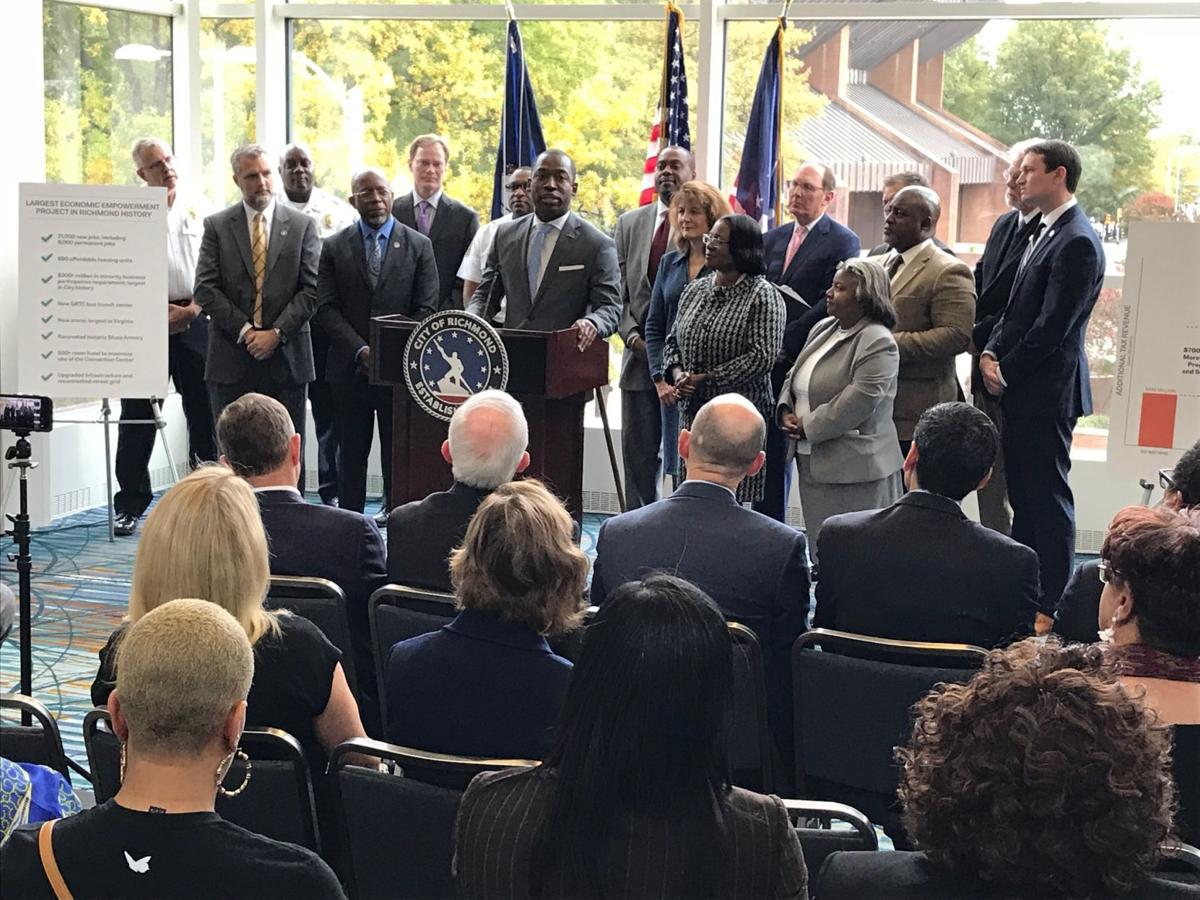 Mayor Levar Stoney spoke at a news conference Thursday during which he endorsed a then $1.4 billion plan to redevelop the area around the Richmond Coliseum, including a new arena. 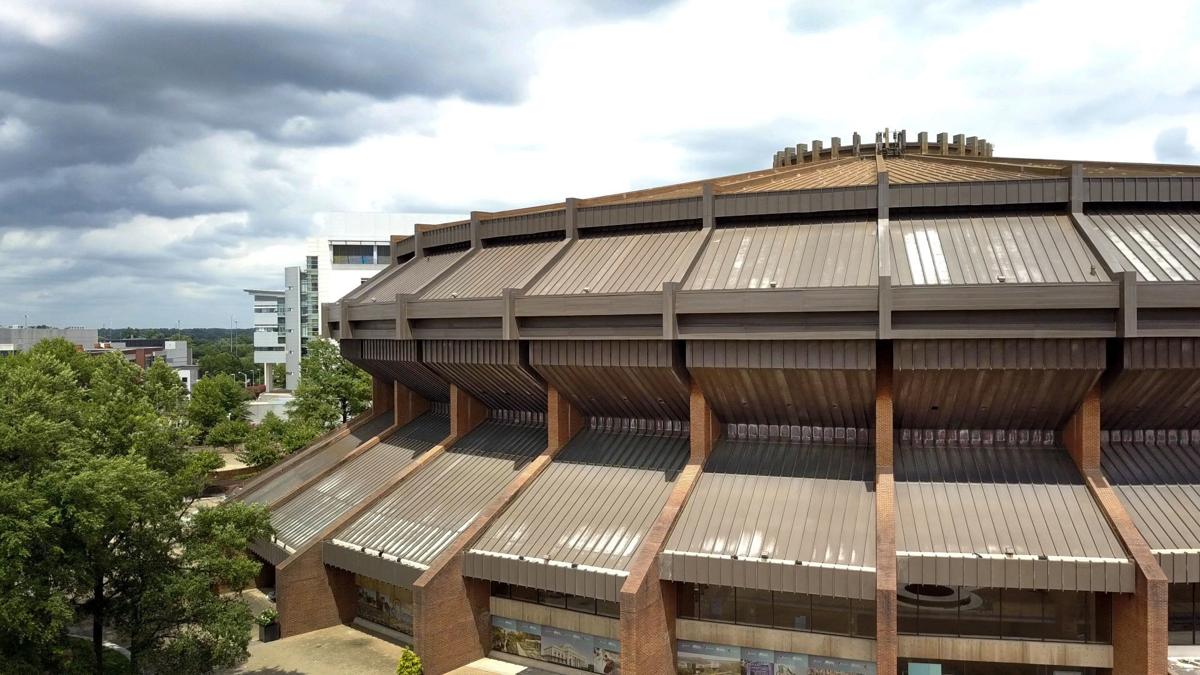 The special tax zone proposed for the Coliseum revitalization project would cover an area eight times the size of what was originally envisioned in downtown Richmond. 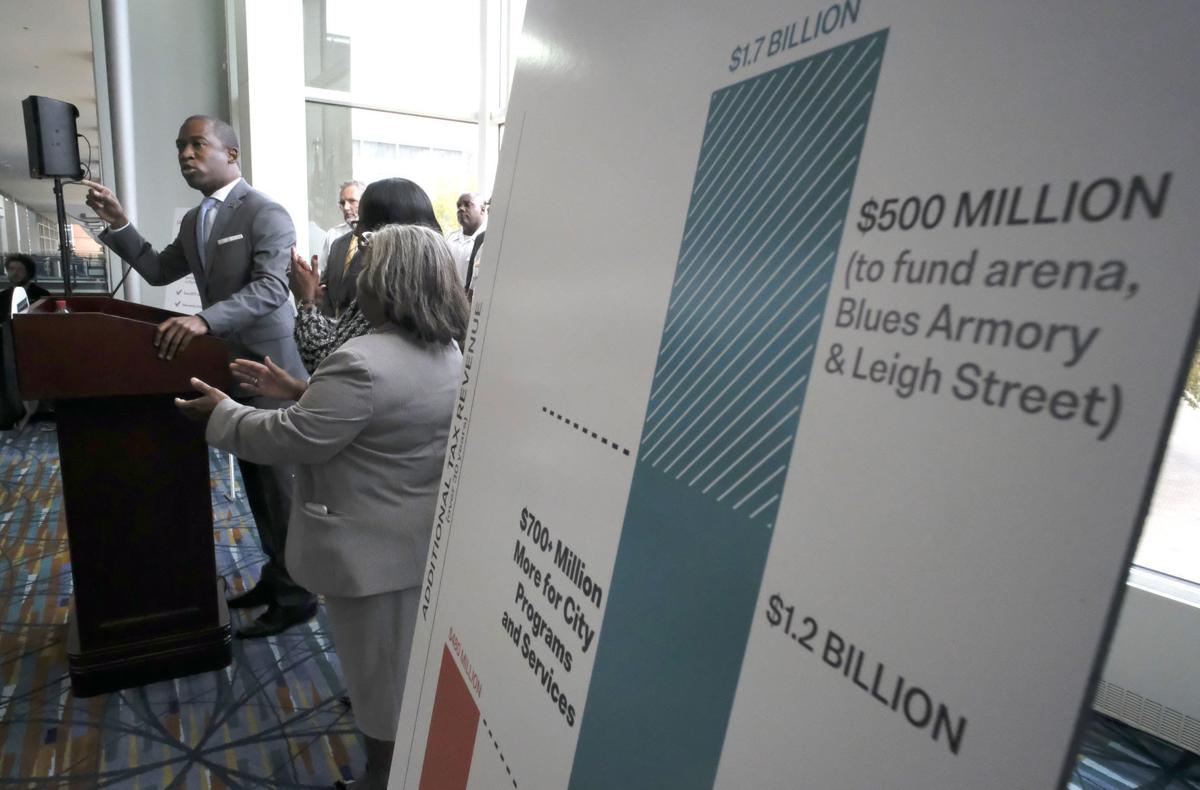 Richmond Mayor Levar Stoney said he expected the Richmond Coliseum redevelopment plan will generate more tax revenue than will be needed to pay back the debt on the project. He said the deal would come with no risk to the city. 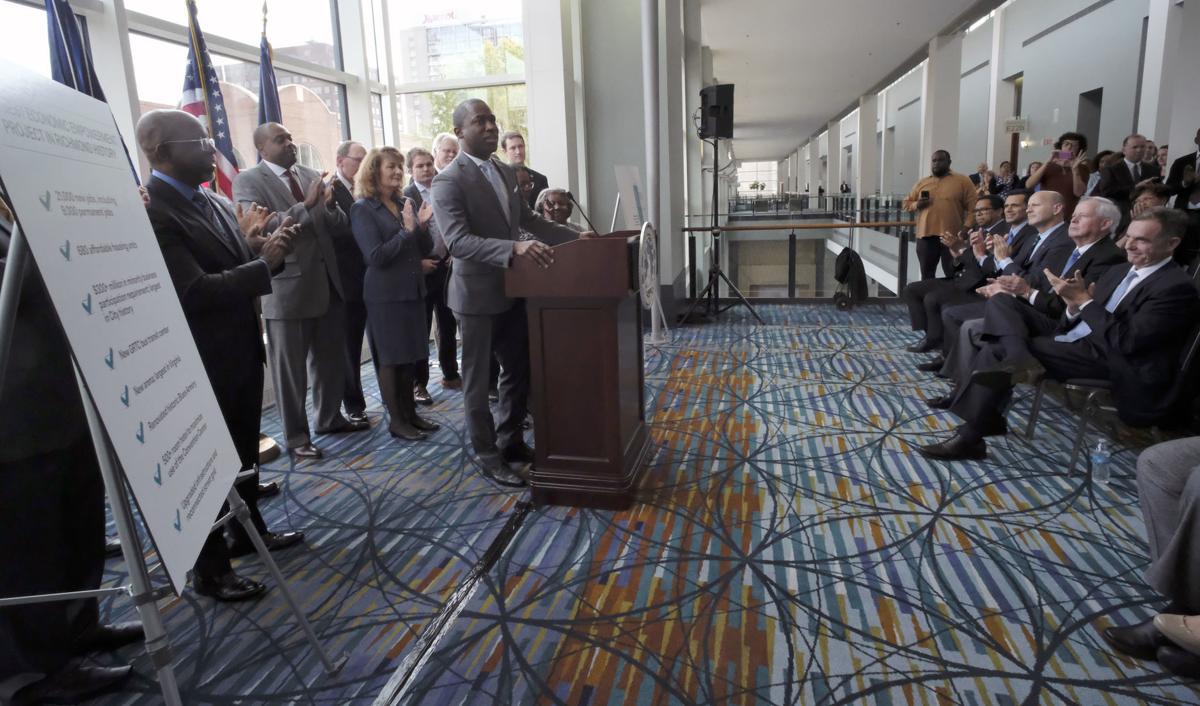 Mayor Levar Stoney endorsed the $1.4 billion project on Thursday, calling it a game changer for the city of Richmond.

Richmond Mayor Levar Stoney on Thursday publicly endorsed the $1.4 billion proposal to replace the Richmond Coliseum and redevelop a vast swath of publicly owned downtown property, pledging to present the plans to the Richmond City Council for approval in the coming weeks.

The deal could create 21,000 jobs — including 9,000 permanent positions — while transforming the downtown landscape and increasing the city’s tax base to generate a net of $1.1 billion in new revenue over the next three decades, Stoney said at the news conference where he made the announcement. The proposal would require the council to sign off on $300 million in public financing that would be paid back over 30 years at a cost of $600 million.

“If approved by the council, this will easily be the largest economic development project in our city’s history,” Stoney said of the deal that is twice the size of the city’s annual general fund budget.

The mayor touted the various moving parts of the sprawling plans to build a 17,500-seat arena, 2,800 apartments, a 527-room hotel, a GRTC bus transfer station, and other office, retail and restaurant space in a roughly 10-block area north of Broad Street. He said the project would also represent the biggest commitment to minority contracting in the city’s history. Stoney said the deal would come with no risk to the city, even if the redevelopment flops.

“The developers and bond holders will shoulder 100 percent of the risk for this project, and not the city,” Stoney said.

Thursday’s announcement is Stoney’s first public statement on the project in two months. Since June, his administration has been in closed-door negotiations with NH District Corp., the private development group headed by Dominion Energy CEO Thomas F. Farrell II.

The city administration has spent the past eight months reviewing the plans, which were the only ones received in response to the city’s request last November for proposals to redevelop the area around the Coliseum.

As Stoney described the project he called a “game changer” for the city and its residents, Farrell and other NH District representatives looked on and applauded.

“The mayor had big ambitions, very worthy goals. We were very happy through these months of negotiations that we were able to satisfy his goals and finance the project,” Farrell said in an interview after the announcement.

Farrell, who said he did not have a financial stake in the proposal, declined to name the private sources NH District is working with to front $1.1 billion for the deal. Private investment will cover the costs of most of the commercial pieces of the project. The $220 million arena, a $10 million renovation of the Blues Armory, and infrastructure improvements including changes to Leigh Street will be paid for using revenue bonds underwritten by a special tax zone.

The zone, called a tax-increment-financing district, or TIF, would capture new tax revenues and redirect them from the city’s general fund to pay down the debt used to finance the public portion of the arena deal.

Stoney said he expects the development to spur more tax revenue than will be needed to pay back the debt, and that money could go toward city schools, road improvements and other core services.

The special tax zone is eight times larger than the area around the Richmond Coliseum that Stoney originally marked for redevelopment, where NH District Corp.’s plans center.

“It’s larger and there are more areas for us to actually invest those dollars into building more affordable housing,” Stoney said.

NH District Corp. will build 280 affordable units as a part of its plans to build 2,800 apartments. The Better Housing Coalition, which is working with the Stoney administration on the project, has received a $5 million donation from The Community Foundation to help fund 200 to 220 additional affordable units downtown at a site that has not yet been determined, said Greta Harris, the nonprofit’s CEO and president.

Stoney said 680 new affordable units would result from the project. Harris said the remaining 180 to 200 units would be funded in a later phase of construction using excess revenue if it materializes from the tax zone.

David Rose, of the city’s external financial adviser Davenport & Co., said a wider tax zone is needed because many properties in the immediate vicinity of the project are owned by the state government or Virginia Commonwealth University.

That means the city couldn’t count on new revenues from those properties to make the project’s financing more attractive for bond investors. As a result, the administration turned to other tax-generating properties elsewhere downtown, to include Monroe Ward, Jackson Ward and the financial district.

Farrell acknowledged in the interview that the current scope of the tax zone exceeds what his group originally requested, which relied heavily on two Dominion-owned towers for extra tax revenue. Farrell said previously that the zone his group requested would generate more than enough tax money to pay for the proposal.

The Dominion Energy properties remain in the latest version of the tax zone the Stoney administration shared with members of Richmond City Council earlier this week.

“It is concerning to me because that part of the city is growing already without a TIF district,” Hilbert said. “A TIF district is usually a confined area that is in need of revitalization.”

A third-party analysis by Chicago-based Hunden Strategic Partners that Stoney ordered said the proposal could generate a projected $1.7 billion in new revenue — $600 million to cover the bonds and $1.1 billion in surplus — over the next 30 years, he said. He pledged to release the report Friday.

Councilwoman Ellen Robertson, who expressed support for the plans, said she and others on the council would have to examine the financing closely before making a final decision.

“I’m going to give myself the opportunity to comb the numbers,” Robertson said. “This financing piece, we really need to look more closely at to make sure those numbers are right.”

Stoney said the deal is crucial to expanding the city’s tax base. He said that city leaders and residents would face a “cost to doing nothing” if the deal dies on the desk of council members. He said he didn’t have a target date of when he wanted to break ground on the project, but would allow the council ample time to deliberate.

Although he said he invited questions from the public and members of the council, Stoney cautioned those in attendance from treating the deal his administration brokered like past economic development projects in the city, an allusion to his predecessor’s failed attempt to build a minor league baseball stadium in Shockoe Bottom.

Other deals, such as the ones that landed the Washington Redskins training camp and Stone Brewing Co., have also stirred controversy and raised questions about whether the city has offered too much money to secure economic development projects.

Said Stoney, “Now is the time not to let our past fears define our future opportunities.”

VCU to hold spring commencement ceremony after previously canceling it

Mayor Levar Stoney spoke at a news conference Thursday during which he endorsed a then $1.4 billion plan to redevelop the area around the Richmond Coliseum, including a new arena.

The special tax zone proposed for the Coliseum revitalization project would cover an area eight times the size of what was originally envisioned in downtown Richmond.

Richmond Mayor Levar Stoney said he expected the Richmond Coliseum redevelopment plan will generate more tax revenue than will be needed to pay back the debt on the project. He said the deal would come with no risk to the city.

Mayor Levar Stoney endorsed the $1.4 billion project on Thursday, calling it a game changer for the city of Richmond. 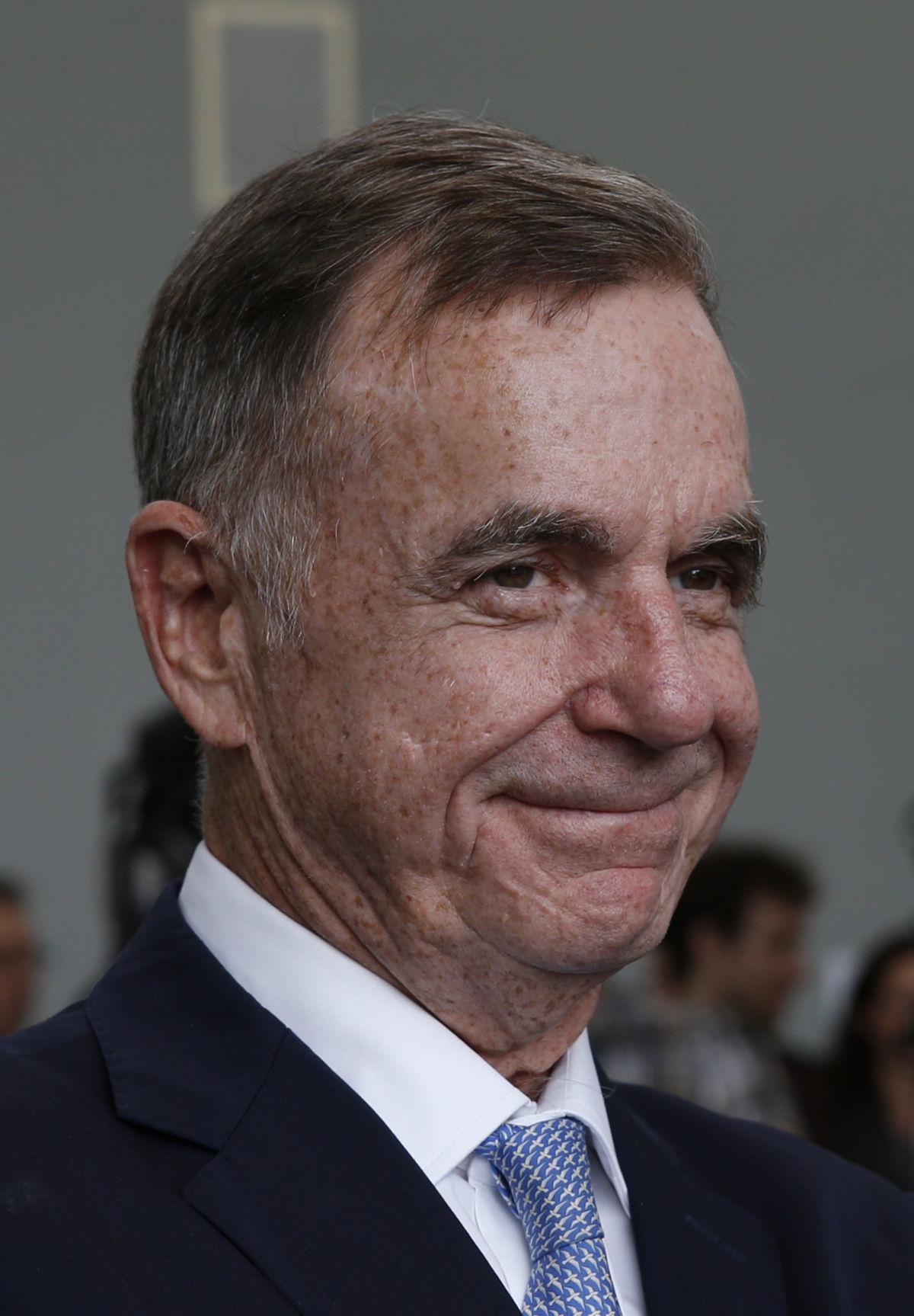