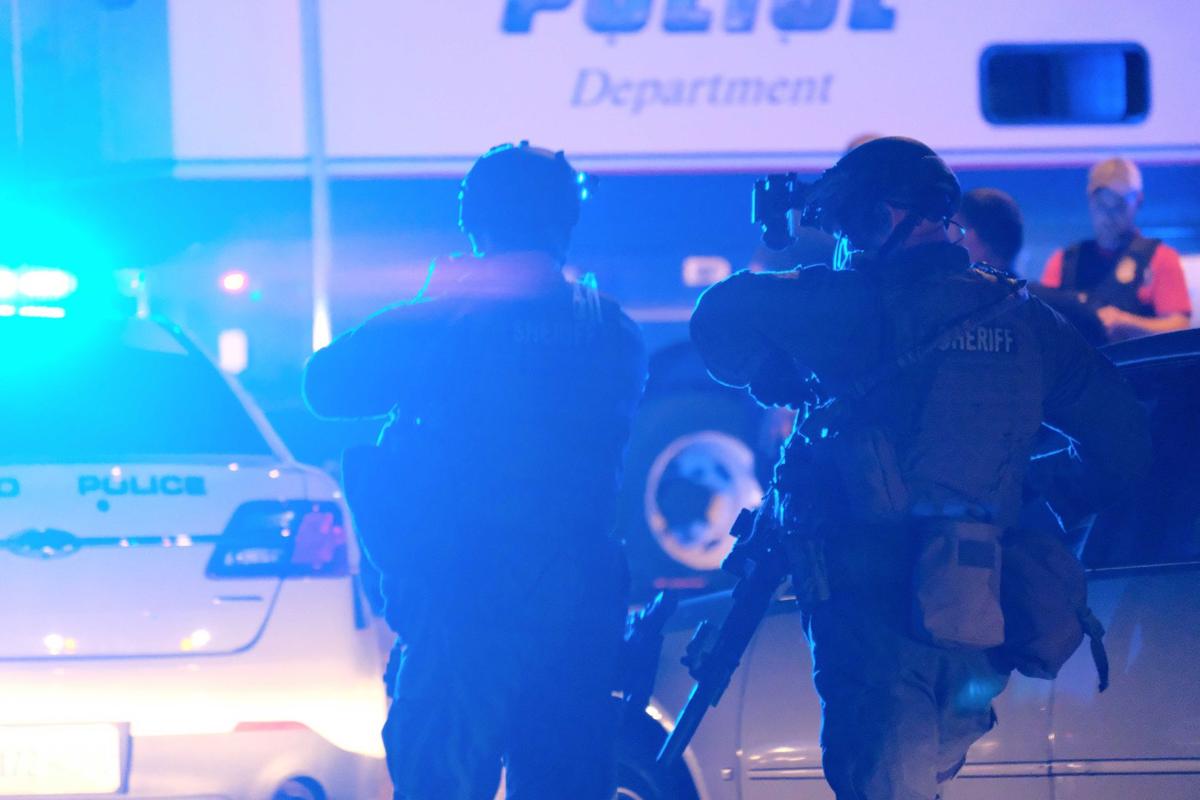 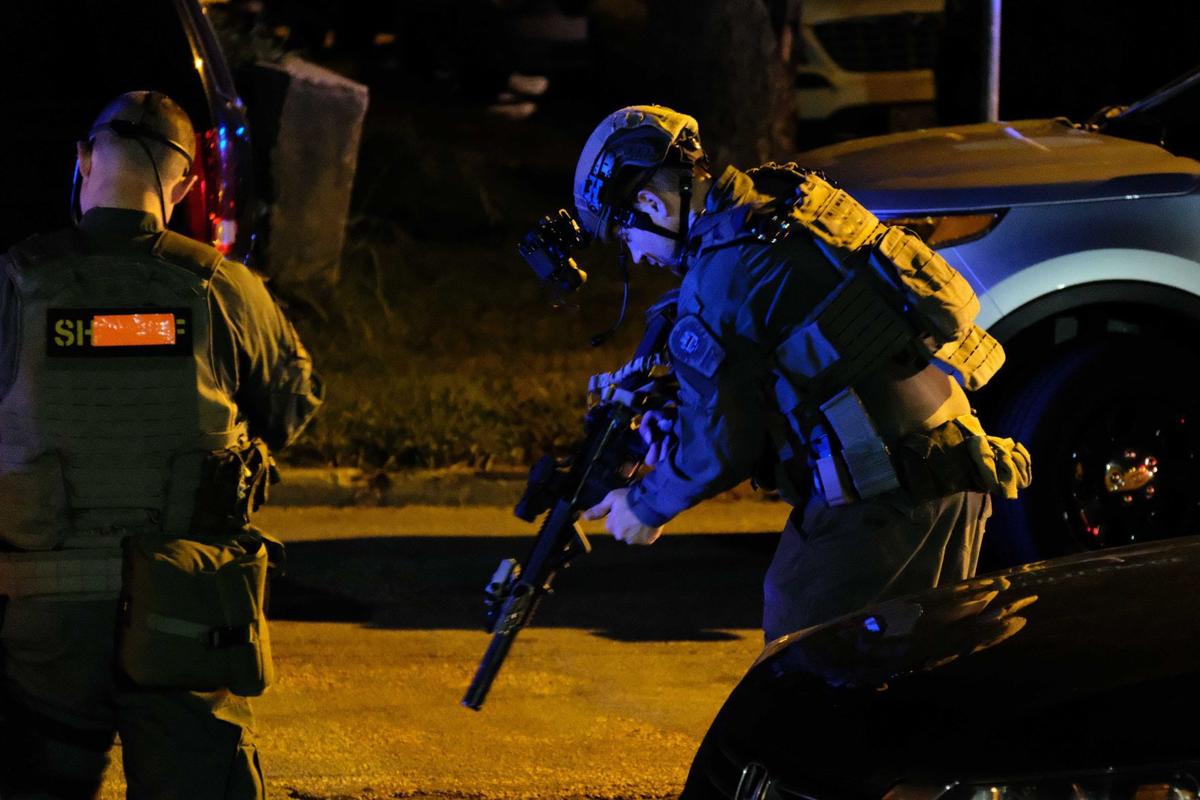 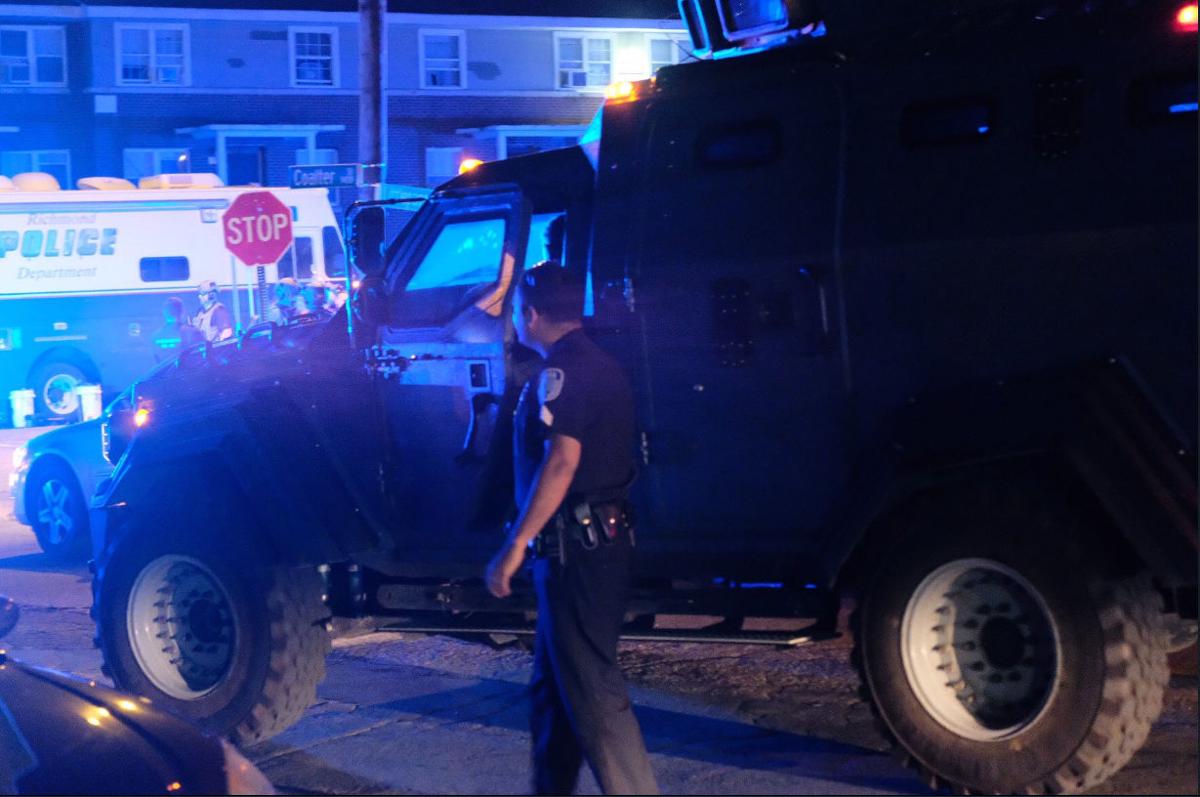 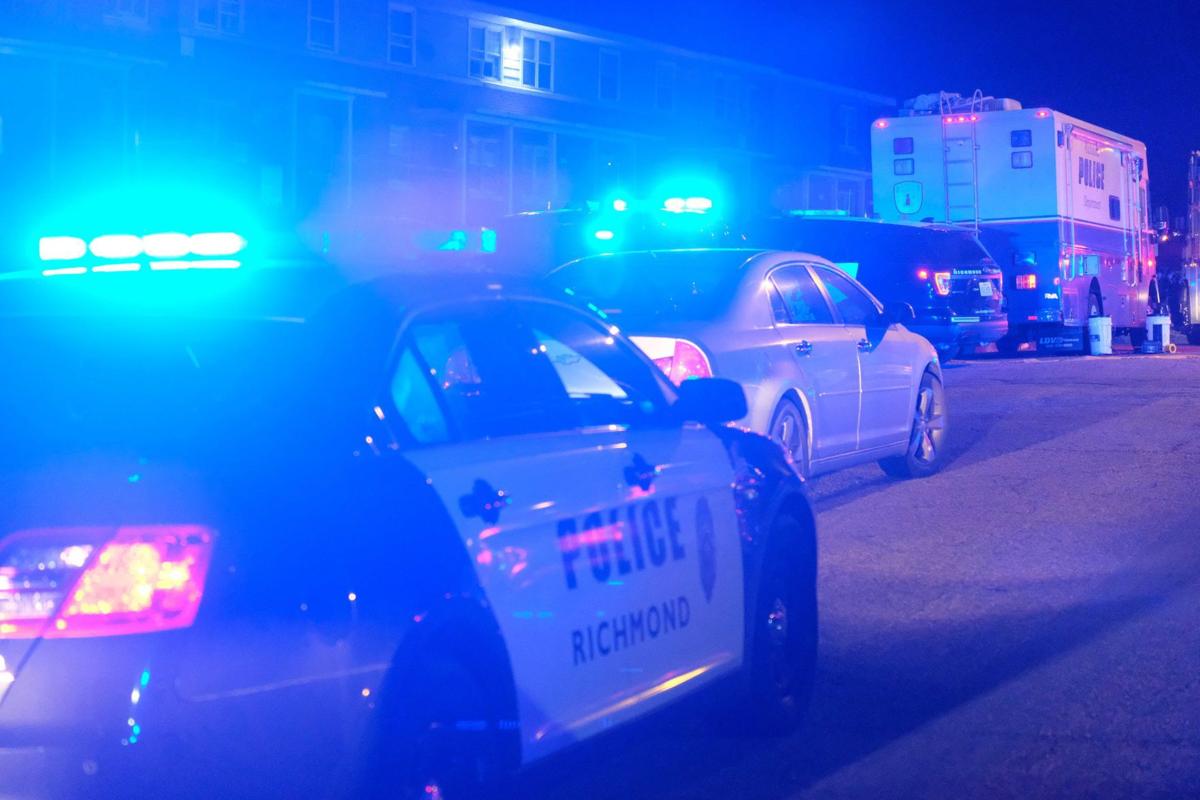 Police responded to Mosby Court after a state police trooper was shot there Friday evening. 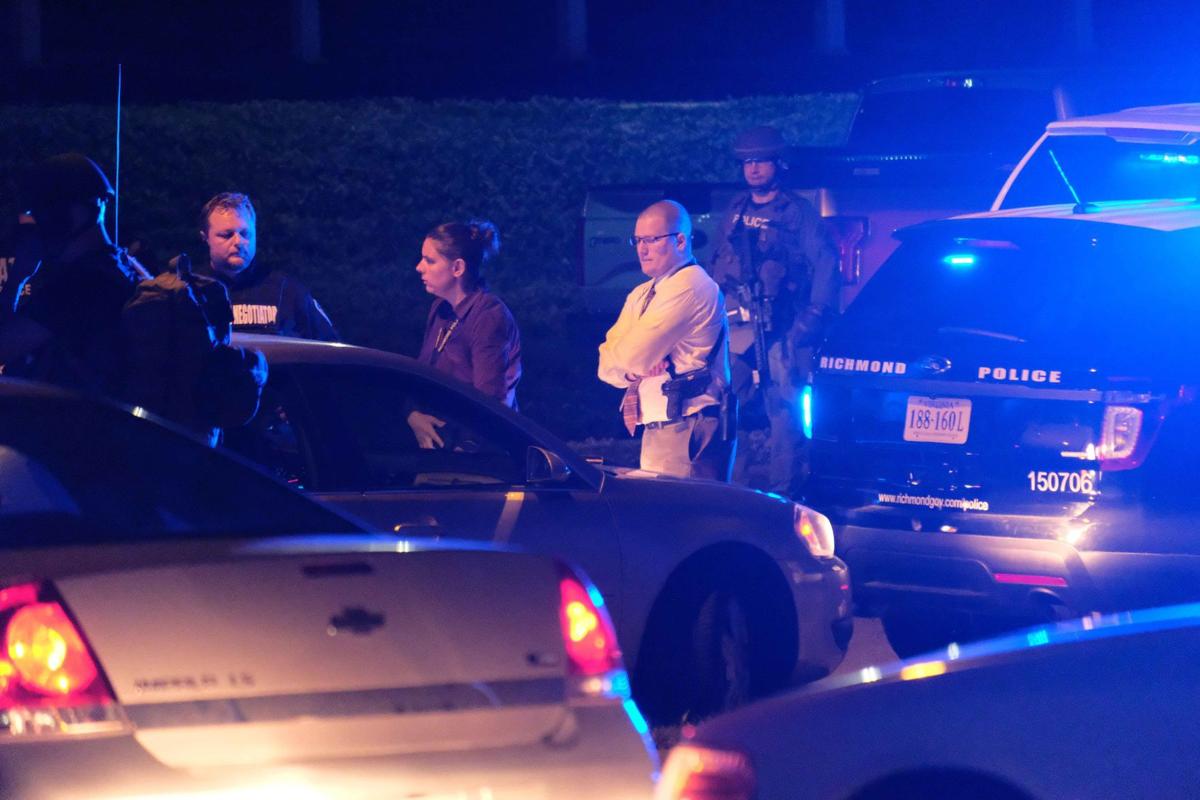 Law enforcement officials responded to Mosby Court after a state trooper was shot there Friday night. 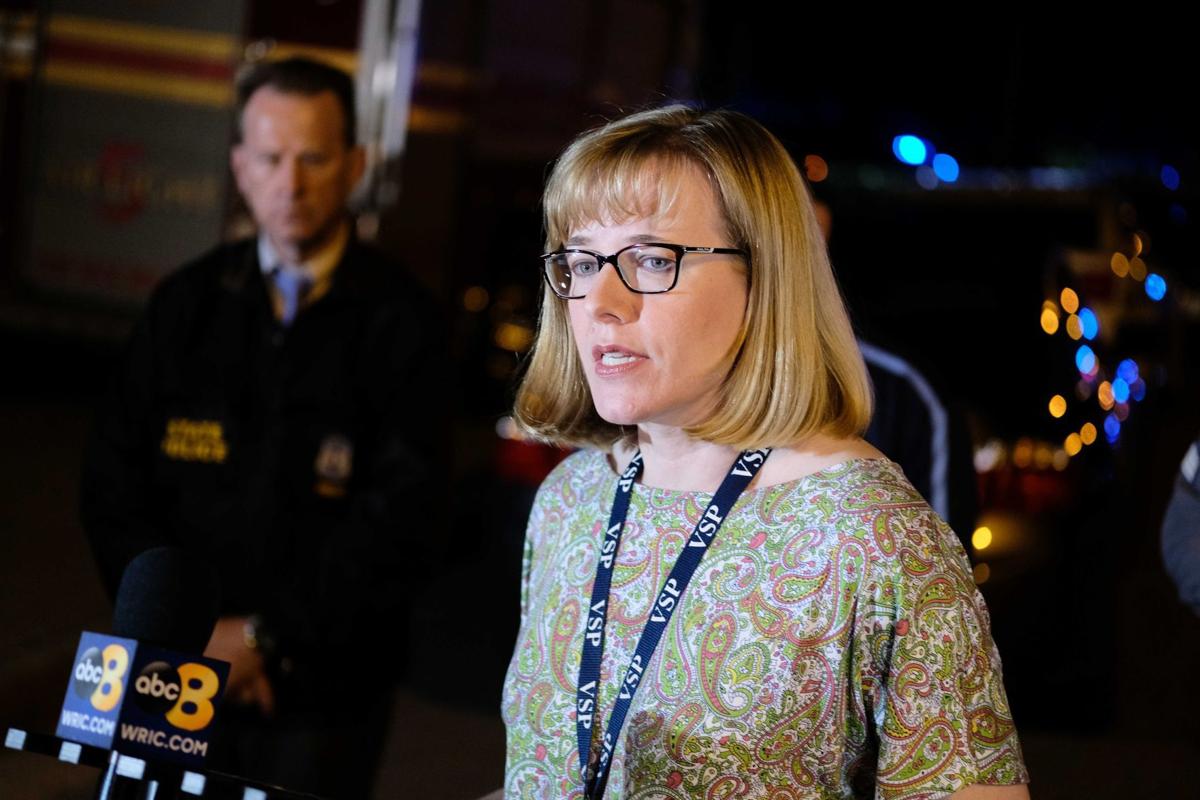 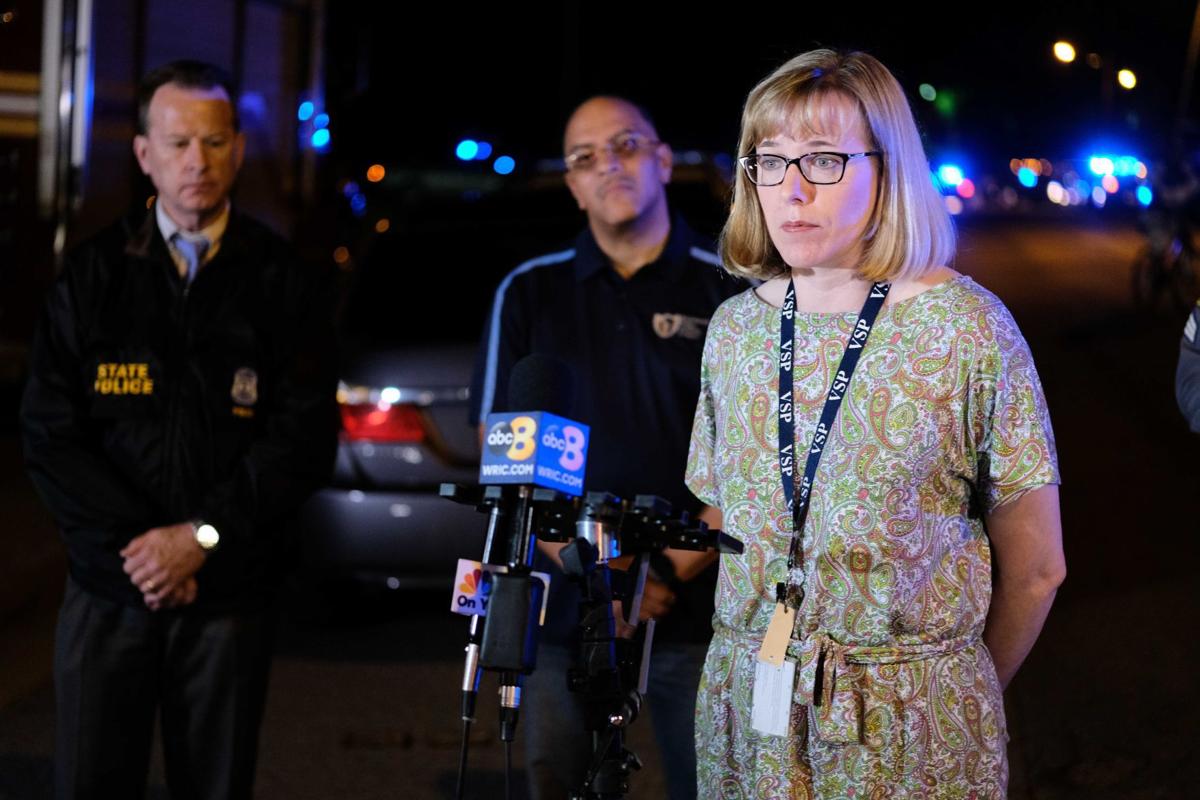 A Virginia State Police special agent has died after he was shot Friday evening after approaching a vehicle parked on the wrong side of the street in Mosby Court.

State police said a Richmond man, Travis A. Ball, 27, is in custody after an overnight search by local, state and federal law enforcement agents.

Ball was apprehended at a home in Northumberland County shortly after 6 a.m. and is being held without bond. He was charged on warrants obtained Friday on one count of malicious wounding, use of a firearm in a felony and possession of a firearm by a convicted felon.

A multi-agency investigative effort involving eight law enforcement agencies and tips from the public led to Ball's apprehension in the Northern Neck, police said. It wasn't immediately clear why Ball traveled to that area.

The shooting happened just after Walter and a Richmond police officer approached the car about 7:30 p.m. in the 1900 block of Redd Street, in the heart of the Mosby Court public housing development. A passenger in the vehicle fired a shot and ran, police said. The driver of the vehicle, whom police have not identified, remained at the scene and was detained.

“It was not an actual traffic stop. They just approached the vehicle," State Police spokeswoman Corinne Geller said. "They were just having a conversation with the individuals when the state police special agent was shot.”

In an update Saturday morning, Geller said Walter was riding with a Richmond police officer as part of the ongoing city-state partnership between the two agencies. She said a handgun was recovered near the car occupied by Ball.

Gov. Terry McAuliffe identified the trooper as Walter in a tweet at about 10:20 p.m. Friday evening, several hours before law enforcement officials confirmed it.

In a statement just before 10 a.m. today, the governor issued his condolences.

“Dorothy and I are deeply saddened by the loss of Virginia State Police Special Agent Mike Walter, and we are heartbroken for his wife and children," McAuliffe said. "Special Agent Walter was one of our brave men and women in uniform who risk their lives every single day to protect their fellow Virginians. We will be forever grateful for his service and sacrifice.

“As the community grieves, I ask my fellow Virginians to join me in praying for Mike's family, friends, and fellow troopers who are suffering from this sudden loss," the governor added. "No words can heal their pain, but we can all honor Mike's memory by showing gratitude to those who protect and serve every day.”

“I am heartbroken over the loss of Virginia State Police Special Agent Michael T. Walter in a senseless act of violence here in our city last night," Stoney said in a statement.

"Richmond joins the entire law enforcement community in mourning the loss of this fallen hero and brave public servant, who worked every day to keep the rest of us safe.

"I ask my fellow citizens to keep Special Agent Walter's wife and children in their thoughts and prayers in the difficult days ahead, and to honor his service with a renewed commitment to a safer, more peaceful city."

Police from across the region poured into the area in the hours following the shooting.

On Friday night, law enforcement in tactical gear, some carrying assault rifles, had cordoned off all entrances to Mosby Court while a small plane buzzed overhead. Some officers searched the area with K-9s.

No one was being allowed in or out of Mosby Court and police were going door-to-door asking residents what they knew about the incident, according to multiple people with family members and friends in the complex.

Yet Ball had somehow initially slipped away.

Mosby Court has gained a reputation as one of the most dangerous neighborhoods in the city. Richmond Police Chief Alfred Durham said last month the public housing complex is a priority for police and is driving up violent crime.

At a news conference Friday evening, Durham said six of the city’s homicides this year have occurred in the Mosby community and a total of 19 people have been shot in the vicinity.

“We have some great people who live in this community and they’re living in fear. It’s a small population of individuals who think they can run rampant and instill fear in our citizens,” the police chief said. “People are only going to do in your communities – I’ve said it before – what you allow them to do. So this is a plea. This is a final call. Enough is enough.

Please pray for state trooper Mike Walter who was shot tonight in Richmond. Fighting for his life.

Police responded to Mosby Court after a state police trooper was shot there Friday evening.

Law enforcement officials responded to Mosby Court after a state trooper was shot there Friday night. 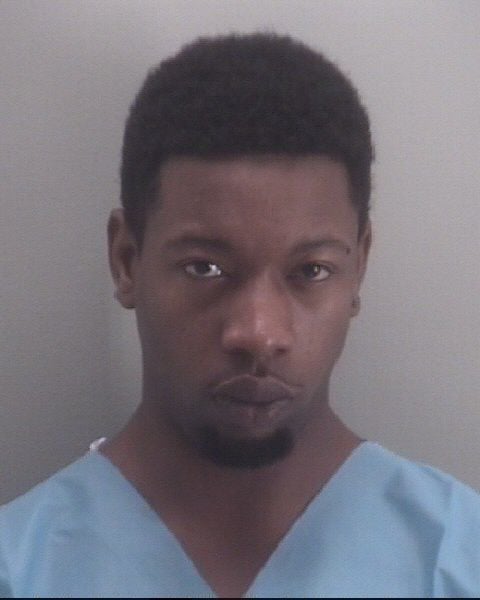